Kirby and the Rainbow Curse Gets the Ball Rolling Again - Preview 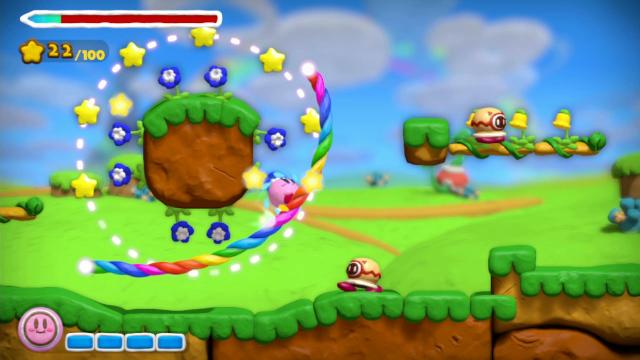 In Rainbow Curse, Kirby is in ball form. He'll automatically move in whatever direction momentum is taking him and you must use the stylus to draw a safe path for him. Your paths need not be straight lines - they can be drawn in any direction, even upside down, and Kirby will follow it. Tapping Kirby will make the pink puffball use a dash attack, which gets him moving forward and also can be used to take out enemies. When dashing into an enemy, Kirby will take its ability (if it has one) and make it his own. In typical Kirby fashion, that power can then be used to wreak havoc on all of his foes, until Kirby takes a hit or the player chooses to drop the power.

Your stylus paths don't just advance Kirby to the level's end point. Skilful line drawing will take Kirby into stars, items, and other goodies that can be picked up throughout the level. They can also be used as walls to protect Kirby from enemies, spikes, or powerful jet streams, just to name a few possibilities. 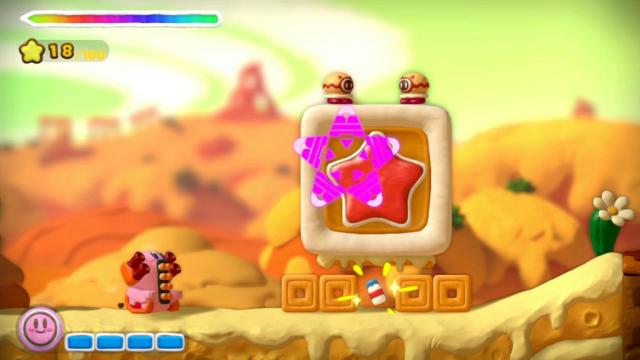 Kirby and the Rainbow Curse differs from its predecessor by making its entire world out of clay. Everything, from the levels to the enemies to our heroic puffball himself looks like a claymation production, though it runs more smoothly. Between Kirby and the Rainbow Curse and Yoshi's Woolly World, it is clear that Nintendo is letting its developers run wild and display their artistic abilities in different and exciting ways, and that is great to see.

The game otherwise feels identical to Kirby: Canvas Curse, but since we haven't seen its like in about a decade, it doesn't feel tired or boring. Indeed, the only negative impression to report on is the game's worryingly unspecific release date: Kirby and the Rainbow Curse is set to release sometime in the year 2015.