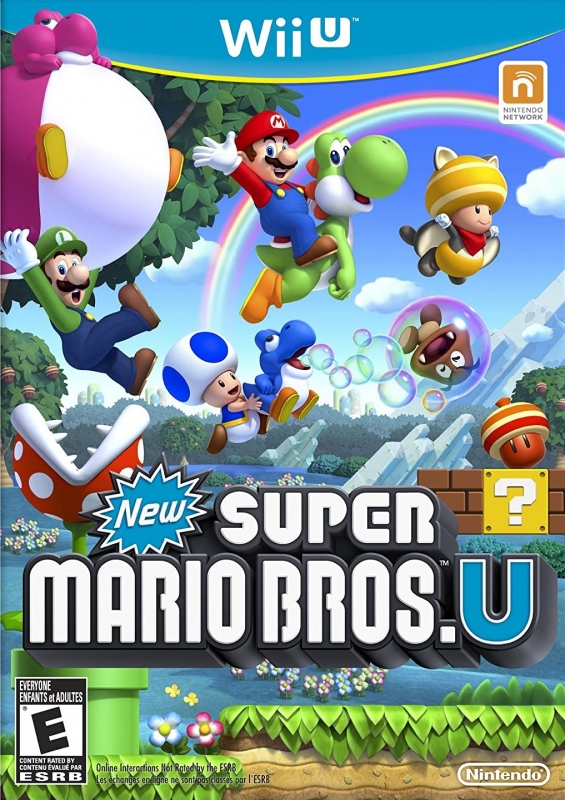 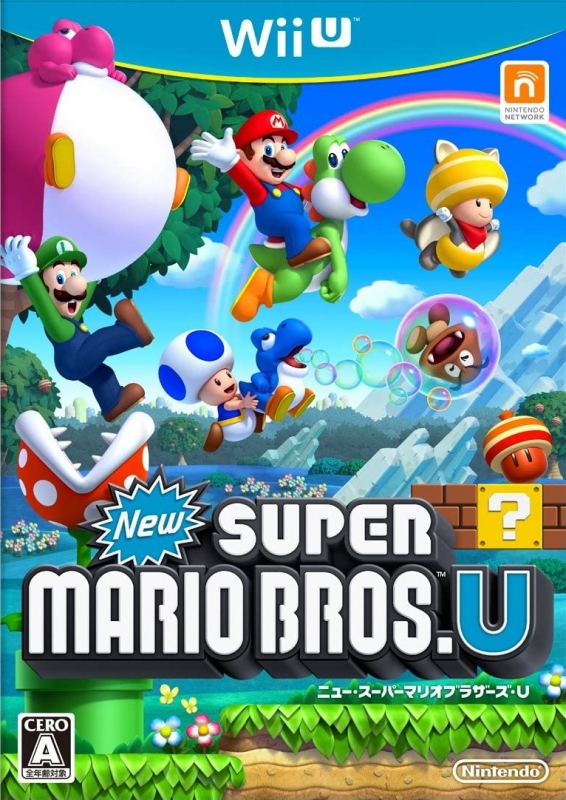 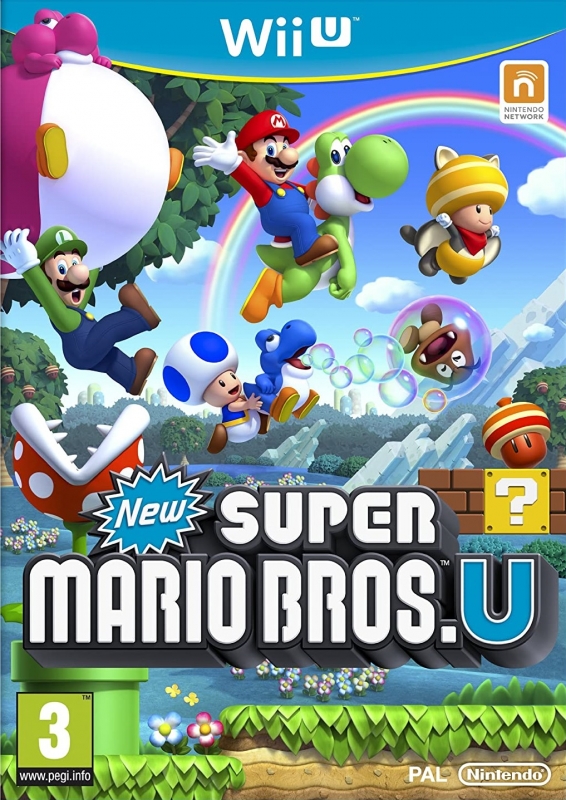 Of all the games I have ever played, I doubt any have brought me closer to my family and friends than Super Mario World. I played it with my brothers, my mom, my dad, my aunt, my cousins, and best friends for hours on end, defeating Bowser and his diabolical children (you can’t change history Miyamoto!) countless times. That being said, no game has made me as furious at these exact same people as New Super Mario Bros. Wii and its infuriating multiplayer. Now Nintendo have released New Super Mario Bros. U, and it comes sprinkled with a healthy dose of Super Mario World nostalgia. Is this a match made in heaven, or in gaming hell?

Bowser, not content with whisking the Princess off to his far off lair has invaded the castle proper and tossed Mario, Luigi and two toads (these guys really need proper names) out into the far reaches of the Mushroom Kingdom. Here they have to fight their way back to Peach’s castle, battling everything that King Koopa throws at them on the way. The series has, in the past, gotten a lot of flack for not changing up the story very much (does Mario really need an in-depth tale?), but this small change in pace actually does liven things up a bit.

It can be argued that the ‘New’ Super Mario Bros. series does the least to move the series forwards in terms of gameplay mechanics, as for the most part the series delivers some good ol’ fashioned Mario 2D platforming without any fluff. New Super Mario Bros. U continues this tradition, but this time around the folks at Nintendo may just have crafted a Mario adventure whose level design even rivals the venerable Wii classics Super Mario Galaxy one and two.

It’s not just that the level design is top notch - every New Super Mario game has had that after all - it’s that almost every level is unique, presenting a different challenge from not only the other levels in the game but from any Mario game that has come before it. For the first time in a long time it really does feel like you are playing a ‘New’ Mario game, one that draws heavily from the best of them all: Super Mario World. From the connected overworld with different paths (you can skip over entire worlds) to the classic enemies (I missed you Torpedo Ted) and even the return of Baby Yoshis, the game feels like a bona fide sequel to Super Mario World.

But it’s not all stuck in the past, however, as this entry introduces some new hooks to the series lore. Of course the game introduces the mandatory new power-ups, such as the magic acorn that puts Mario in a flying squirrel suit that allows him to glide for a short amount of time. The game’s other new power-ups come in the form of three different coloured Baby Yoshis, each with their own ability to help Mario on his way. Despite all of this it's disappointing that New Super Mario Bros. U didn’t follow in its predecessors footsteps and show off the unique capabilities of Nintendo’s new hardware (like Super Mario World, 64, Sunshine, and Galaxy did). In fact, 90% of what you see when playing the game could have (and in some cases has) been done on every Nintendo system since the DS.

New Super Mario Bros. U offers up two different control methods. You can, of course, take control of Mario with the Wii U Gamepad (D-Pad or Control Stick to move, ‘Y’ to run, ‘B’ to jump, and the ‘L’ or ‘R’ bumpers for a spin jump). Or you can go ‘retro’ and fire up a Wii Remote, which controls exactly the same as New Super Mario Bros. Wii. I know you've just got a shiny new Gamepad, but I do suggest playing the game with the Wii Remote, not just for the familiarity it offers but also because this is one example of the Wiimote being a much more comfortable option for long gaming sessions.

In fact, if you plan on playing the game’s multiplayer mode you’re going to need to bust out the Wii Remotes anyway. The game supports up to five players (four as Wii Remote-wielding heroes of the Mushroom Kingdom and one unlucky person who gets to make platforms with the Gamepad. Don't all volunteer at once). This feature, while occasionally helpful, doesn’t really add much to the experience and ends up being a drag for the person holding the Gamepad. But of course if you’re playing New Super Mario Bros. U’s multiplayer mode the biggest issue won’t be who gets saddled with ‘platform duty’, it's that fact that the game features the exact same intolerable 'four-players on the screen ruining everyone’s jumps and throwing eachother into the lava' multiplayer as NSMB Wii. I don’t understand why Nintendo don’t just let two characters occupy the same space, like in Kirby’s Return To Dream Land or Donkey Kong Country Returns, because as it is later levels are nearly unplayable, especially when the players are of varying skill level.

As well as the main ‘story’ mode, there's also some extra content for you to jump into. There are, of course, the traditional Coin Battles, but there's also the new Boost Rush mode that tasks you with collecting as many coins as you can, with a catch: the more you collect the faster the level scrolls. It’s fun for a while but the lack of rewards or purpose really doesn’t make it worth revisiting. The all-new Challenge Mode is a different beast entirely. Here you must complete various challenges (time trials, earning extra lives, etc.) within a set time and in vastly different situations. Think you’re good at platformers? Well try to survive on a single block surrounded by spikes as two fire bros. pelt you with flames. Challenge mode is an absolute thrill to play and earning gold medals is never an easy task. Five years from now if New Super Mario Bros. U is remembered for anything it should be this long overdue introduction.

In fact in general the difficulty has been ramped up, which is a definite positive. The game doesn’t throw millions of coins at you, and by the time you reach the later (and hidden) levels you will be seriously searching for lives. Add to that level design which often throws new and unexpected things at you and you have a New Super Mario game that is refreshingly challenging.

This being the first high definition Super Mario game, a lot of people may have expected a revolution for the series' look, but the game plays it pretty safe in this regard. The character models are practically the same as they were on the Wii and 3DS, and the general art direction feels more like a continuation than even an evolution, let alone a revolution. That being said, one area where the game does shine is in the backgrounds, which look absolutely stunning in HD. From the far-off view of mountains, to the (see it to believe it) ‘Starry Night’ level, the game is pleasant to look at, it’s just a shame that the whole package doesn’t exhibit this same level of artistic creativity.

The soundtrack is very disappointing. The problem here isn’t the quality - this is a good soundtrack - the problem is that the very same soundtrack was good in 2006. This is Mario in HD six years on and we’re still listening to the same tracks that were composed for the Nintendo DS iteration. This feels like an extremely lazy way to launch your flagship franchise on a new system.

Earlier I mentioned how the game borrowed from Super Mario World for its level design, but that's not the only way in which this title is reminiscent of Mario’s 1991 adventure. You can explore the world map the same way you did in Super Mario World, except now you and other players can post comments via Miiverse that will appear on your world map. This adds a whole new dimension to the game; a social element that feels a lot like the schoolyard banter that went along with video games in the early 90s, only now in your living room.

I was worried for New Super Mario Bros. U. It looked and felt so much like the Wii version and launched so close to the 3DS edition that I really wondered whether it could stand out. Thankfully, for the most part, New Super Mario Bros. U manages to carve out its own distinct path, thanks to some fabulous level design, great new additions, and some design inspiration from a true classic. This certainly won't be the Wii U’s definitive Mario experience, but early adopters can't really go wrong with New Super Mario Bros. U.

This review is based on a Wii U copy of New Super Mario Bros. U.