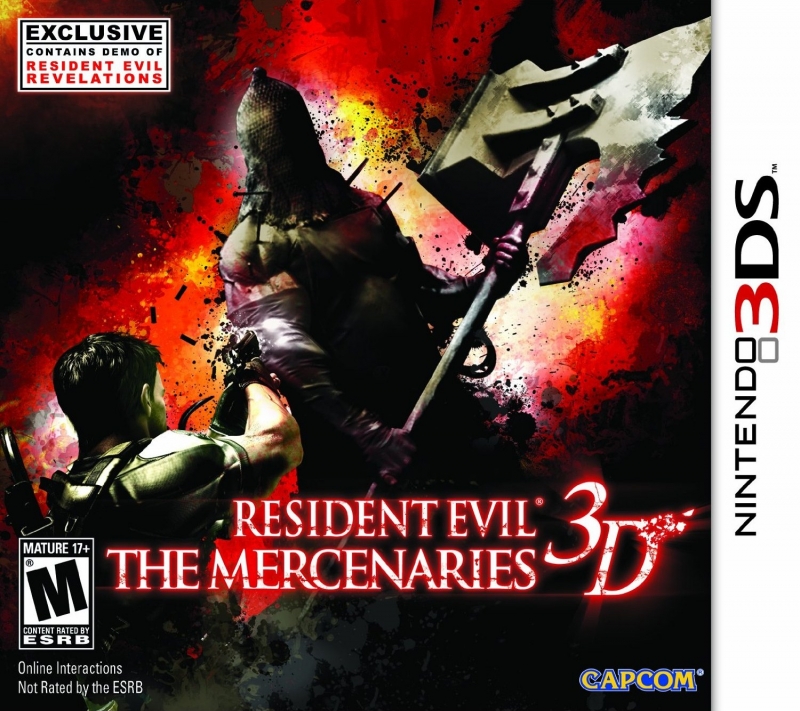 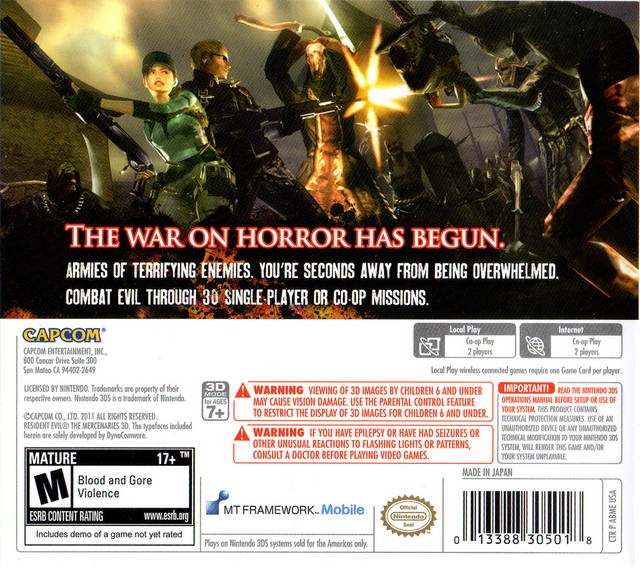 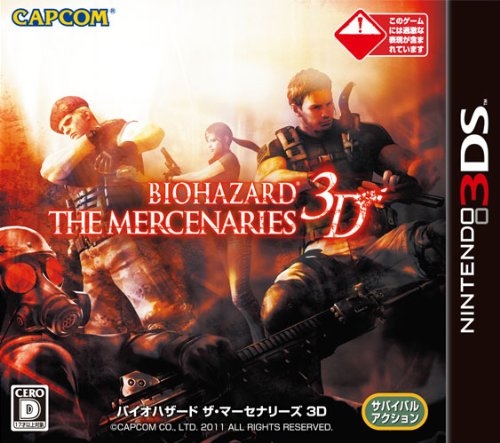 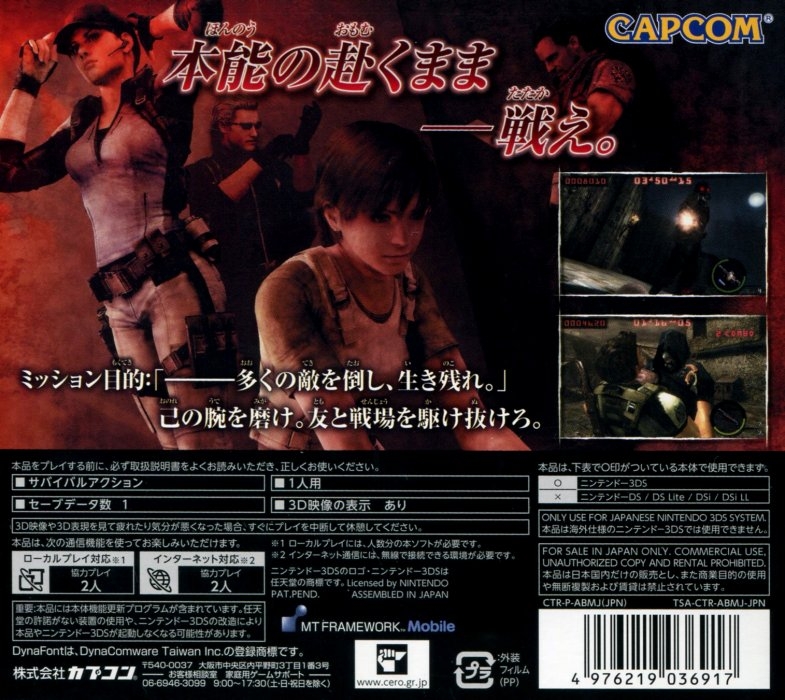 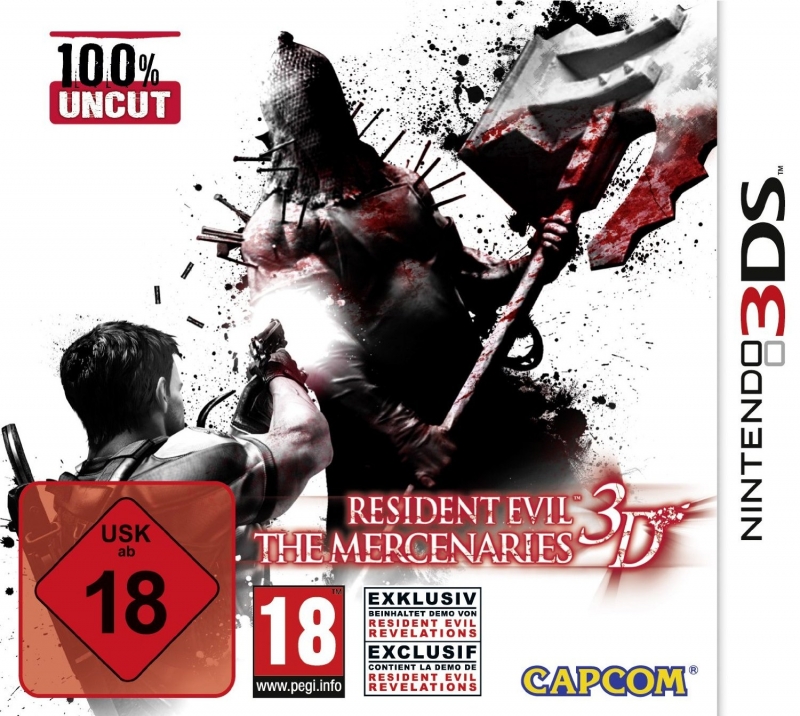 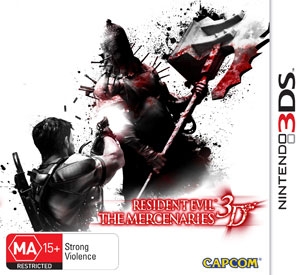 Unsettling for all the wrong reasons.

The Mercenaries hasn’t changed much as a minigame. You choose a character and try to kill as many enemies as possible within a time limit on a small to mid-sized map. Along the way you build up combos by killing enemies in succession and can break crystals to earn time bonuses. The challenge is to stay alive and fend off enemies, while contending with a dwindling supply of ammo and scouring for pickups. At the end of the mission you receive a letter grade based on your score from D all the way to SS. That is the basic foundation upon which the entire game is built on, though there are a few new elements mixed in.The game incorporates co-op play by allowing you to team up with a partner either locally or via the internet. When playing as a duo you tackle the swarms of enemies as one, which includes sharing the same clock and combo. The clunky item sharing system from Resident Evil 5 has been scrapped but you are still responsible for resuscitating your partner because the game ends if either one of you die. You can keep track of where your partner is at all times by looking on the map but aside from a few simple statements accessible through button presses you don’t really have a way to effectively communicate with them if they aren’t in the same room as you.A skills system has been added to shake things up. As you play you unlock special skills that you can assign to characters to improve their performance. The assignable skills range from improved rifle handling to receiving a time bonus if you defeat an enemy with a “7”. The skills themselves level up the more you use them, which can take a large amount of time. The other addition is medals, which are awards you earn for satisfying special conditions. There are fifty in total and you complete most of them just by clearing levels, but others seem like a way to just pad out the experience with difficult objectives, such as clearing a mission with 100% accuracy or without using the Quick Turn. At the beginning you only have 3 characters to choose from and must unlock the others by progressing through the game. Each character has their own set of 2-3 weapons along with grenades and healing items. The weapons are displayed on the bottom screen and you can switch swiftly between them by clicking on the touch screen. At the early stages of the game the character you choose will be heavily influence by the weapons they carry. Later on you unlock the ability to use any character’s weapon set with the rest of the cast.The first few levels require you to complete specific but easily accomplished objectives such as finding all the time bonuses or tactically disposing of monsters. These serve more as a tutorial than satisfying content. There are 5 levels each with a varying number of missions within. Most missions require at least a B grade with any character to progress. The game technically becomes more difficult as you move on but the curve is not steep and most of the challenge comes from having to survive longer mission durations than anything else.Resident Evil: The Mercenaries 3D is impressive on a technical level. The character models and environments from the last two full Resident Evil titles have been convincingly transported to the 3DS. In addition the 3D effect really pops during gameplay, heightening the tension as that hoard of the undead that was far off in the distance suddenly spring towards you (sometimes with a chainsaw). There are a few drawbacks though: all of the environments are recycled from Resident Evil 4 and 5, the animations for the finishing moves can be off at times, and enemies behave strangely and look odd when they're (apparently) standing idly in the distance. The game sounds fine. There is little-to-no dialogue and the only real spoken part belongs to the person detailing your mission objectives. The rest of the characters groan when hit and expel battle cries when delivering finishing blows. To get the full effect of the audio requires playing with headphones because the 3DS speakers do not always communicate the telltale sounds of off-screen enemies as they approach you. The soundtrack does not quite hit the mark with its eclectic, but ultimately disjointed, mix of creepy tunes and songs that would sound more at place in an elevator. The rest of the sound design is impressive with explosions and guns that fire with a real kick.The controls have been adapted just as well as the look of the franchise. The circle pad is used for movement, while the default controls map aiming to the right shoulder button and items to the Y face button. The complaint about the inability to shoot while moving has been rectified at long last. By holding down the left shoulder button the game enters first person mode, allowing you to move and shoot at the same time. The technique works well but I honestly didn't find it necessary to use often. The 180° quick turn is still your best friend in a pinch, helping you to change direction and flee from danger. There is still an ample use of quick time button prompts to pull off finishing moves and dodge or escape enemy attacks. The map display on the bottom screen is useful to find escape routes in a pinch as well.A demo of the upcoming Resident Evil Revelations is included as a bonus. Resident Evil Revelations Pilot Version is a brief, unsatisfying preview of the game. The demo certainly doesn’t match up to the build I played at E3 and previewed here. The build that comes with the game starts out similarly, with Jill moving through the creepy halls of a deserted ship. All you can do is move and shoot; there is nothing to discover and no items to pick up. Over the course of the preview you come into contact with three enemy monsters. The demo ends once you have defeated all three (or if you die before then). On the surface everything described above makes The Mercenaries seem like a damn fine game, and it is in a sense, but the biggest problem with the package is its dire lack of original content. Not only are most of the assets and content recycled from Resident Evil 4 and 5 but a lot of the game itself is as well. The 8 maps offered are small and become dull to play after a few hours. The mission structure rarely changes and, even when it does (during one of the few boss fights for example), the game’s idea of shaking things up is throwing the exact same boss at you, accompanied by four large axe-wielding Executioner Majini. You can complete your first play through in a couple of hours. After that you unlock the EX missions which provide a tougher challenge but stick to the same formula. The game is still fun and functional, suited well to quick portable play on the go, but at full retail price its offers horrendous value. The Mercenaries 3D would make a great rental, except for the fact that finding such a deal will prove difficult thanks to the well documented decision for the game to only allow a single permanent save file. Even the disappointing demo of Resident Evil Revelations is detrimental to the appeal of Resident Evil: The Mercenaries 3D. I still believe Resident Evil as a series is a good fit for the 3DS but this poorly conceived debut is a disappointing way to celebrate the 15th anniversary of the franchise and not really a game to recommend to anyone until it sees very significant price reductions.