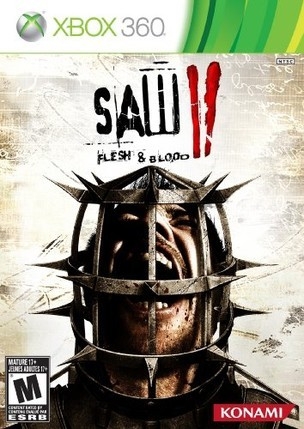 Even as a casual fan of the film series, I still couldn’t muster excitement for Saw’s first foray into gaming back in 2009. If anything, though, the first game managed to exceed many (admittedly low) expectations. This sequel was well positioned to improve on those (numerous) areas of the first game that were most heavily criticised, and though plenty of changes have been made, these haven’t necessarily been for the best.

Picking up right after the original Saw videogame, Saw II: Flesh & Blood’s primary protagonist is Michael Tapp, the son of the detective from both the first film and game. Saw II draws on events from the original game and the film series as a whole as inspiration for its story and for many of its puzzles and death-traps, though it is crafted in such a way that non-fans will be able to follow the core of the narrative. The story isn’t going to blow you away, but it is pretty solid and certainly captures the feel of the films. Naturally, your character wakes up having been abducted by Jigsaw, and his accomplice, Pighead. You must then navigate a huge abandoned building complex, fitted with death-traps, puzzles and moral quandaries that are designed to test Michael’s character and allow him to seek some twisted kind of redemption. 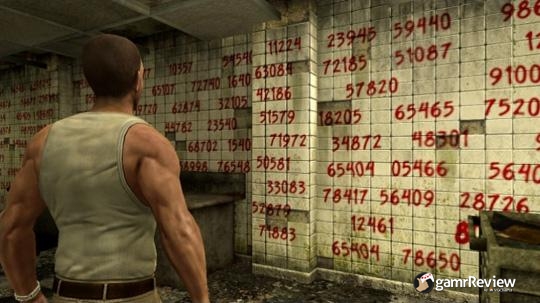 Gameplay can be divided into two key parts: puzzle solving and action sequences. Of the two, the puzzles are definitely the strongest. Some of them can be quite challenging (the first puzzle had me stumped for a good 15 minutes, even though I knew the solution in theory) and even inventive. ‘Once introduced, several times repeated’ is the order of the day, however. Having to solve near-identical puzzles over and over again only serves to undermine the initial originality behind many of them.

The action sequences, which could have been a welcome interjection from puzzle solving, changing up the pace of the game and allowing you to smash a few heads in at the same time, actually turn into a frustrating chore. Every single action sequence is, literally, a quick time event (QTE). Dodging death traps, navigating unstable terrain and combat are all dealt with using boring quick time events. Combat in particular feels extremely ill suited to a QTE system, which removes all of the tension and excitement that you usually expect from melee combat. Saw II is crying out for a Condemned-esque combat system; the scenarios are similar, with crazed maniacs coming at you wielding whatever blunt instrument they happen to have come across, but the execution is miles apart. What could have been one of the strongest aspects of the game is nothing more than a frustrating missed opportunity. 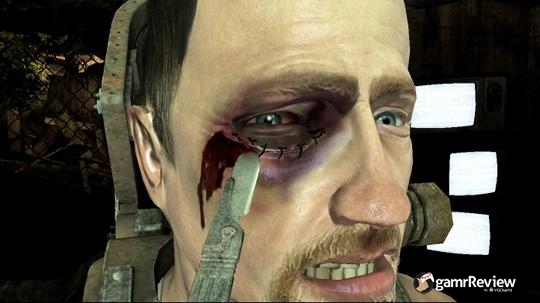 Some of the Quick Time Events even feel broken due to the poor way in which instructions are conveyed by the game. Though they aren’t actually broken in practice, it can take some time before you realise where you’re going wrong. Meanwhile, each time you fail, you die, which only makes the poor instruction even more frustrating. There’s an oft-repeated action sequence where you have to walk across a thin plank of wood. The game tells you to alternate the triggers in order to negotiate this death-trap, misleadingly giving the impression that this is how you balance your character across the plank. In actual fact, in order to balance you must use the analog stick in conjunction with the triggers, but the game never mentions this. Fail a QTE or a death-trap and you’ll likely... die, which means reloading a checkpoint. Some games come to mind where this is dealt with superbly, either with near-instantaneous reloading or a well crafted checkpoint system. Saw II is not one of them. You’re punished with a standard-length loading screen and a checkpoint that will often be set quite a way before the trap which caused your death, forcing you to repeatedly cover the same ground until you manage to complete what will often be a fairly arbitrary QTE.

The presentation isn’t stellar – the graphics are fairly mediocre, character models are weak, assets are frequently recycled and the settings don’t vary much throughout the course of the game - but it is serviceable. In many ways, it’s in-keeping with the film series. The environments are often very dark, drab and run down, from isolated industrial complexes to dilapidated abandoned apartment blocks where the odd used needle in the corridor wouldn’t feel amiss. The brutal violence of the death traps has also been well transported into the game. The controls and character movements are a little clunky but are nonetheless functional. Sound design is pretty average; the theme music is spot on, but the rest of the music and sound effects are forgettable. Much of the dialogue is clichéd pap, with the exception of that of Jigsaw, as his original actor Tobin Bell lends his vocals to the game; the gruff standout voice from the films is delivered just as superbly here. 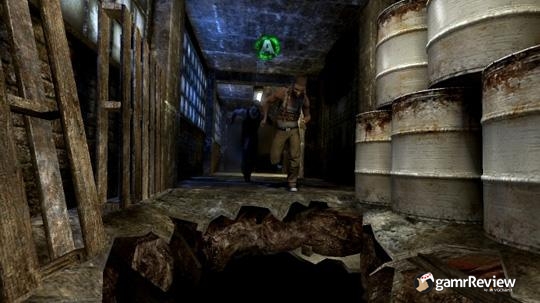 Saw II doesn’t have much in the way of value. The game takes around six hours to complete, though this will vary wildly from person to person depending on how good they are at puzzle solving and dealing with QTEs. As with the first game, there are two different endings, though the scenarios are less compelling in this iteration. There are also collectibles strewn around the levels, providing additional back story and bits of information. They’re similar to Joker’s riddles in Batman: Arkham Asylum, and the vast majority are hidden away from the main path, so finding them all will add a few hours to the overall playtime. However, these don't really offer a sufficiently compelling reason to replay the game.

This is neither a broken nor a bad game; it’s just pretty mediocre. Some of the puzzles are inventive, even if many of them are repeated several times over. The setting and story fit the series well, but sub-standard graphics and absolutely woeful action and combat sequences only ever encourage unfortunate comparisons with SEGA's Condemned series. On a functional level, everything in Saw II: Flesh & Blood works, but as a sequel it abjectly fails in its attempts to improve the series.