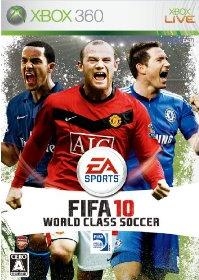 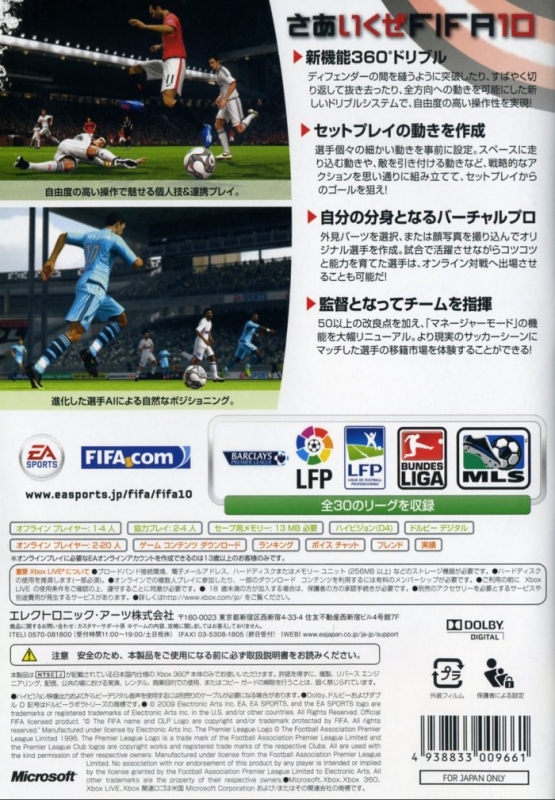 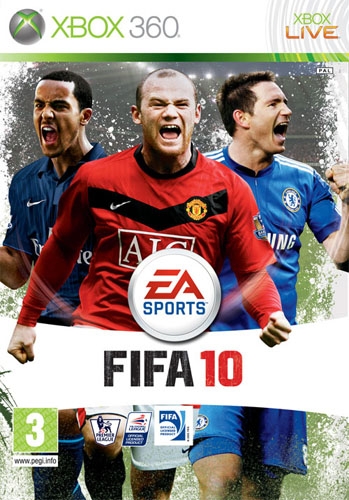 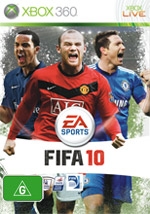 Football at its finest.

Yearly sports game often catch a lot of flak for being yearly. The pressure is placed on developers to improve upon a winning formula while maintaining a modicum of familiarity. Other titles have been hit or miss in recent years, but consistency manifests itself in FIFA Soccer 10. Actually, there is more to it than being consistent; EA Canada manages to add some innovative features and stronger controls while ironing out the many kinks from 09. The result is a shining example of what a sports game should be.

Let’s start off with the game’s newest additions. First up is the Practice Arena where you can improve your skills before stepping into a real game. The transition from the hub is seamless with just the push of a button. From there, utilization of customizable set pieces allow you to record and create plays from dead ball situations. This addition feels natural and is ideal for newcomers or returning veterans attempting to master the subtleties of the 360° dribbling system. The improved dribbling is the most apparent change from past years with a controller in hand. Finer control creates a more dynamic way to get around defenders supplemented by enhanced animation that will make it easy to mistake it for a live game.

The quality of the on-field execution is the end result of various clever changes. For instance, free kicks and referee carding no longer necessarily lead to a pause in the gameplay. Stronger AI for both computer controlled opponents and teammates eliminate most of the pesky little problems from past iterations. Players respond to various situations with better positioning by avoiding passes not intended for them or throwing themselves in front of attacking shots on defense. The Goalkeeping is phenomenal; with less static animation and a new sense of urgency leads to important saves that would otherwise leave the game feeling off balanced.

The Be a Pro feature introduced in 09 returns in top form; once again having the player guide a single athlete through their career. However, the newly introduced Virtual Pro builds upon this elementary notion by allowing you to create your own footballer and use him across a wide array of game modes. The performance of your superstar in any capacity contributes to his overall development. The customization options are satisfactory at best, but you can upload a digital picture of yourself and have it mapped onto your player. The so called Photo Game Face feature works as advertised, although the process can be a bit of the hassle as it requires you map out some facial features using a PC.

Virtual Pro really allows your unique player to become the focal point of everything you do in FIFA 10. Once placed on a team, your pro will appear on that team in offline skirmishes and even the manager mode. Your Virtual Pro will unlock new attire, tricks, and even celebrations by accomplishing certain achievement-like feats, complete with their own addictive sound byte. It is quite easy for your bias to lean heavily toward your avatar, but unselfish play does account for a noticeable portion of the awards. The interference of the EA corporate machine, here represented by upgrades you can purchase from the FIFA store for your player, somewhat hampers the allure of the Virtual Pro feature, but it is still a strong new component to the game.

Manager mode boasts a more authentic experience thanks to a professed “50 major improvements”. Player development is something you will have to keep a close eye on as it will determine how you handle the individuals on your squad. Factors such as age, environment, club prestige are all taken into account in simulating how the league is run. Scoping new talent is made more interesting with international transfer market vying for the same pool of players. Overall the Manager mode offers so much depth it could be difficult for newcomers to wrap their head around all of it. Help is available, but uncouth gamers still have a steep to climb before they can manage a club adequately.

The wildly popular online portion of FIFA continues to take strong strides. You can take on other players head-to-head, team up with nine other players for team play, and even form your own club and compete in friend leagues. The matchmaking is accommodating to your skill level and connection level to minimize lag which generally isn’t a problem. There is also a lot more freedom with game options during online play. Online or off, the multiplayer in FIFA 10 is both exhilarating and enjoyable.

FIFA games have always been well put together, and this year is no exception. I’ve already showered the new animations in praise, but the rest of the package looks good as well. Aside from minor detail touches, it looks identical to 09 which is not a bad thing. The frame rate is smooth, and any problems with stuttering have been eradicated. Player details are the best they’ve ever been, and most stadiums are fairly represented.

The sound remains gripping. Andy Gray and Clive Tilsley return to provide commentary as best they can. Typically the duo do a good job following the action on the pitch, but there are a few instances where the comments seem random and unjustified. Gray is the more interesting of the two, but if you’re unsatisfied you can always download additional commentary packs in other languages. The roar of the crowd is convincing. The soundtrack is a strong sampling of tunes that play to the game’s  audience. international

When all is said and done, the sheer number of options available in FIFA 10 combined with the quality of the gameplay form one of the best sport sims on consoles. The presentation upgrades can’t keep up with the pace of the ever evolving action on the pitch, but for now it’s excusable. EA Canada have outdone themselves yet again; FIFA 10 will stand proudly as the greatest benchmark ever achieved in sports games. That is until we see what next year has in store.