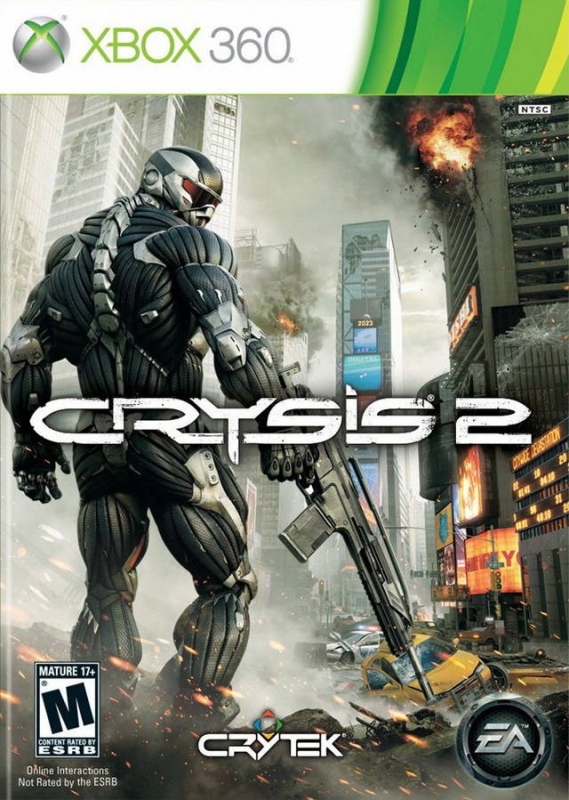 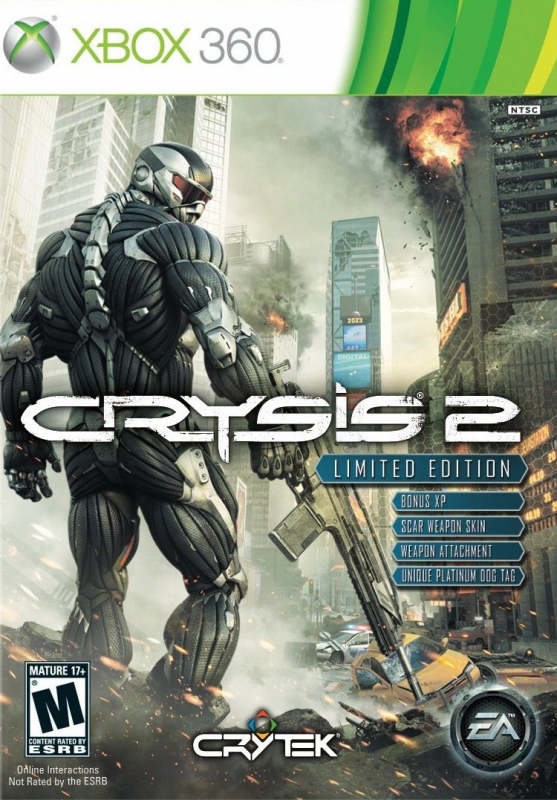 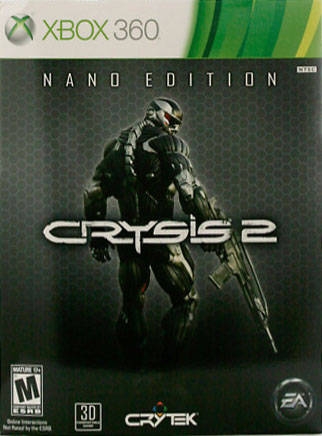 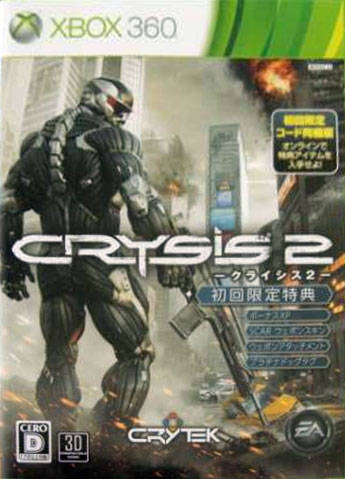 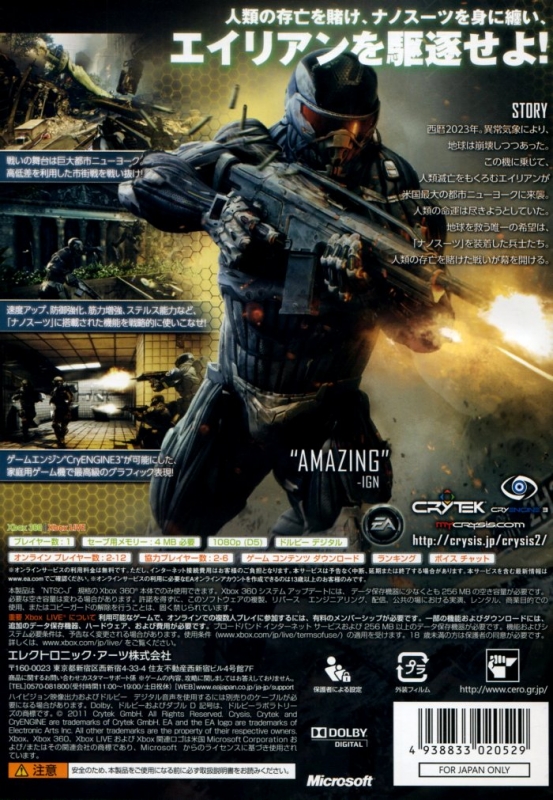 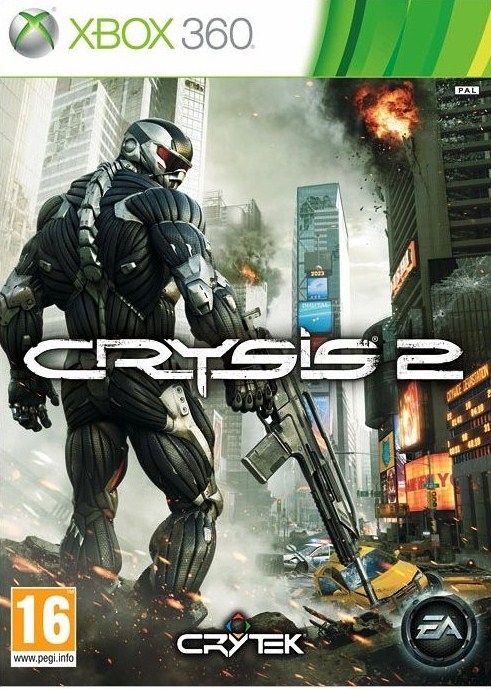 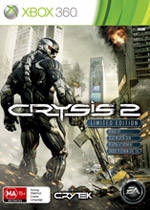 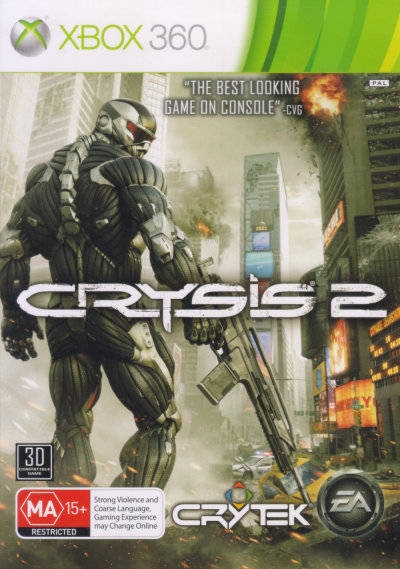 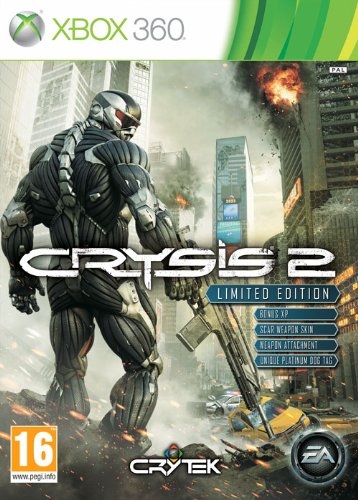 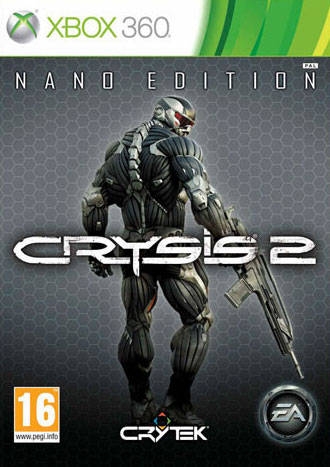 So much more than just a pretty face.

New York City is ablaze. The ceph encountered in the Pacific Ocean weren’t an isolated event, but only a precursor to a much larger infestation. The ceph are trying to wipe out humanity and it looks like New York City is a great place to start the party. You begin Crysis 2 as a U.S. Marine: codename Alcatraz. Before the credits even roll, you and your squad are decimated by a ceph gunship. Alcatraz washes up on shore only to find Prophet, the squad leader from the first Crysis waiting for him. I won’t give too much away, but in short order you’re wearing the nanosuit… and you’re the only one. So begins a story that will keep driving you forward to the bitter end. The nanosuit isn’t just a cheap way to explain high-jumps and tough skin, but is really more the central character of the Crysis 2 story than Alcatraz himself. The nanosuit has three modes: power, stealth, and armor. Power is actually a combination of the strength and speed modes from the original Crysis and is the default mode of the nanosuit. Jumps, punches, and kicks can all be powered up by holding their respective buttons, though at the cost of some energy. This gives you high jumps and the ability to bash in alien skulls or kick cars into your foes.Armor mode is accessed by pressing the LB button. This mode passively uses your energy reserves, though it uses them quicker as you take more damage. This mode makes you move slower but allows you to absorb much more damage, react less from enemy fire, and regenerate health faster. Stealth mode is accessed with the RB button and also uses energy reserves passively, though the depletion is accelerated whenever you move in stealth mode. This mode allows you to move about undetected, though getting too close to an enemy can alert them and using a weapon will momentarily disrupt the effect. These three modes make for gameplay that is more varied than any other non-RPG shooter on the planet outside the original Crysis. Each map is designed to let you approach the enemies and the situation how you see fit, using the abilities you’re most comfortable with. Armor mode lets you do your best Duke Nukem impression while stealth mode brought back fond memories of Metal Gear Solid. Sometimes I would go nuts and kill everything in the area while in other missions I made my way through killing nothing at all.Your nanosuit can be upgraded by spending nanocites which are found every time you kill a ceph. There are four different upgrade “trees”, so to speak. These allow you to upgrade the nanosuit according to how you like to play the game. Increasing armor, longer lasting stealth, tracing enemy bullets, and proximity alerts are all possible upgrades you can take. Adding to this variability is the suit’s tactical visor. This visor will display the locations of enemies, supplies, and possible tactical objectives in an area. Want to know the best route for flanking or avoiding enemies? Want to stand back and observe the patrol routes? This can all be done using the visor and a nice hiding spot. I was able to plant some C4 on a car, wait for a patrol, then kick the car off a building right onto the patrol and trigger the C4. Boom, goes the alien!

Don’t think those enemies will go quietly into the night, however. Human enemies have fairly good squad AI. If you drop into stealth in sight of them, they’ll fire at your previous position and chatter about your cloaking. Taking out an enemy with stealth may go unnoticed at first, but soon the fallen foe will fail to check-in and everyone will know you’re in the area, heightening their state of alert. Aliens are a different matter. The ceph are a ruthlessly aggressive AI and most are incredibly agile, bobbing and weaving out of your line of fire as much as they can. Some will rush you head on, then scurry up a wall and leap at you. Some will do their best Muhammad Ali impression: jumping around and firing with incredible accuracy. Even the larger and slower alien enemies are oppressive with their relentlessness and massive damage absorption.Multiplayer in Crysis 2 brings the host of nanosuit abilities along for the ride. This time around, Crysis 2 has six multiplayer modes rather than just two. Instant Action (deathmatch) returns and brought its buddy along, Team Instant Action. Power Struggle is missing, but now there’s Capture the Relay (capture the flag) and Crash Site (king of the hill). Assault mode is divided into rounds without respawns in which one team is defending objectives while the other team tries to hack those objectives. Finally, Extraction mode places “ticks” around the map. The defending team gains bonuses while these ticks are defended. The opposing team is trying to capture and extract these ticks, gaining the ticks’ bonuses while carrying them. These modes do a great job of giving players the old standby modes as well as some that take particular advantage of the nanosuits and the specific game mechanics of Crysis 2. All multiplayer modes can be up to six on six, a drastic reduction from the 16 on 16 provided by the original Crysis. The multiplayer maps are all taken from the single-player campaign, so they offer loads of nooks, crannies, hallways, and levels to hunt your opponents on. The lack of vehicles and the smaller maps make the multiplayer feel more like Halo than Battlefield, but going from one great multiplayer experience to another isn't a bad thing. Add to all that a generous leveling system that allows you to purchase all sorts of weapons and abilities, and you have a very well-rounded multiplayer experience.The original Crysis was a PC exclusive known more for pushing gaming rigs to their limits than the great gameplay and story it featured, but it wasn’t lacking in those departments, either. Now Crytek has taken the franchise multiplatform, using their new CryEngine 3 to adapt the game to both HD home consoles in addition to the PC. Since this is a review on the Xbox 360, there will be no comparisons against the presentation of the original PC game.Simply put, Crysis 2 is the best looking game on the Xbox 360. Period. Crysis 2 brings this dystopic New York City to life with vivid graphics. The animations, textures, lighting, and visual effects are all superb. What really jumps out at you is how incredibly detailed everything is. The grass blows in the wind as you walk over it. Every space is filled with things that add character and tell the tales of those who formerly inhabited the apartments, offices, and hallways Alcatraz is traversing. As I said before, these aren’t tiny areas, either. Each map is quite large and the level of detail never wavers.The sound design is also spot-on. Both realistic and sci-fi weapons create powerful, visceral sounds when they go off. The voice is acting is quite well done and the sound effects of the aliens are often very foreboding. What really got me, though, was the soundtrack. I don’t often take notice of soundtracks. They just don’t capture my attention like they do in some films. This wasn’t the case with Crysis 2. The music truly had a life of its own and added so much to the story it was telling.In terms of value, Crysis 2 has a very long single-player campaign that will run most gamers 10-15 hours depending on your skill level and the approach you take to it. Pure stealth and sprinting may even bring that number down below 10 hours. Unfortunately, Crysis 2 doesn’t offer a co-op multiplayer, which is a real shame. With so many ways to approach any level, taking all of them on with a friend would be incredible. Crysis 2 also doesn’t feature a split-screen. It does, however, triple the number of multiplayer modes from the previous Crysis, a big improvement. It doesn’t have the near-infinite plethora of multiplayer modes like Halo: Reach, but definitely enough to keep you entertained for many hours. Crysis 2 is a spectacular game in nearly every way. Accurate, innovative gameplay combines nicely with the best presentation the Xbox 360 has ever seen for a truly incredible experience. Halo and Gears of War: you’re both on notice. There’s a new contender on Microsoft’s little console and its name is Crysis.