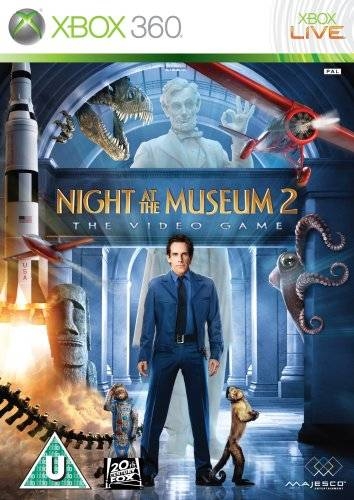 Night at the Museum: Battle of the Smithsonian

Is this a museum worth visiting?

In the world of videogames there are situations that gamers have come to recognize as inevitable.
The lack of quality of film adaptations is one of them - no matter how good the film is, most games end up being bad, bland interpretations  that don’t justify their existence. However, every now and then, we find a game that’s really worth it. Of course, with every new experience that gets translated from the big screen to our living room we hope that it’ll be one of those rare good film-based games. Night at the Museum: Battle of the Smithsonian, sadly, just prolongs the wait.

The game follows the plot of the film, so most of the characters that appear in the film also appear in the game. In the film, Ben Stiller plays main character Larry Daley, and while he provides the voiceover for the in-game counterpart, the character model bears very little resemblance. The story tells us how Larry discovers that his favorite exhibits (who happen to be some of the best friends he had at the Natural History Museum of New York) are going to be sent to the Smithsonian, so he decides to visit the museum to say goodbye.

And visit them he does, armed with his trusty keys and flashlight, which will become his main tools throughout the game. In the first level, which serves as a tutorial, we’re shown how to use the map and how to control Larry in a simple way. Besides, we’re presented with the tablet of Akmenrah (which contains nine magic ingots), a key element in the plot of the game. After experiencing the wonders he can perform with the tablet in a demo directed by Akmenrah himself, Larry leaves for home to rest. He then receives a call from the little cowboy, Jebediah, who informs him that the wicked Kahmunrah has stolen the Tablet, and with the help of Ivan the Terrible, Napoleon, and Al Capone he’s planning to take control of the Smithsonian - and later the world. So our character flies to Washington to stop this group of villains.

Larry manages to part Kahmunrah from the Tablet, but in the process all the ingots are lost, and the real mission begins: to travel the museums to find all the lost ingots, which will give you new abilities and powers that will help you advance through the levels. It’s a beginning akin to Metroid, where all your powers are stolen at the beginning and you must earn them back as you advance through the adventure. The premise, even though not original, is solid and could have been used in very interesting ways throughout the game, but sadly it’s poorly executed and the linearity and incredible simplicity of the game makes the idea dilute into false promises.

The basic controls of the character include the abilities of walking (with the left stick) and jumping (with the A button). The special movements make use of your accessories; the first of which is the keychain (that you use with the Left Trigger), which can be turned quickly to reflect incoming projectiles. With the help of the snake ingot, you can use the keychain to swing from side to side and to reach faraway objects. Your second accessory is the flashlight, which is used with the right trigger, and has the most varied array of abilities, each determined by a different ingot of the Tablet. For example, the Paintbrush ingot allows you to give life to the paintings in the museum walls and to use them as teleportation portals, much like Mario 64; the Animal ingot allows you to control animals illuminated with your flashlight and the Gear ingot allows you to empower motorized objects.

The problem is that the use of those powers feels forced into the game, because far from offering interesting puzzles as you traverse through the levels, they feel almost like they were being thrown in your face, so much of the time it feels as if the game guided you, for example the games automatically shows you the ingot you need to use in every puzzle,  this leaves you without many  options to think. In the game’s defense, it’s worth noting that it’s aimed to young children, and the difficulty level is according.

Maybe it is because the game is aimed to children, but it’s incredibly linear and easy. Each level offers you the same outline: you obtain an ingot with a new power, you use it a few times, you advance to the next level, seldom using your old powers again. There are no alternate roads, save for a few times where you’re forced to use your powers to take a detour for some seconds, just to return later to the same path again. The game offers an important educational side with the implementation of Audio Guides, located in front of the different exhibitions in the museums and offering you real and educational information of the historic character, painting, sculpture or artifact. Without a doubt, a very welcome addition

As for the presentation, the game has a cartoony style that doesn't do anything new or spectacular, despite having a colorful and fluid palette. The backgrounds and scenario elements are poorly detailed, though they accomplish their purpose adequately given the style of the game. The camera sits behind Larry without offering problems and helps the player not to lose ourselves in the middle of the action, something higher-budget games sometimes fail to offer. The enemies are meager, repetitive, and without charisma. The game also offers a lot of unnecessary cinematics (which are also too long) that often break the pace of the game in the middle of action.

For the sound department, Battle of the Smithsonian offers a lot of generic, uninspired tunes. These are often completely unassociated with the action. I had to recheck the game to see that the game had different tunes in the different levels. But, the most irritating aspect here are the voices. For some reason the game repeats the same instructions over and over again, even when you’re following them. The game offers you the option to press the Y button if you get lost, at which point any of your partners will offer you a tip, but this seems almost unnecessary as the game is intent on giving you a hint every 5 seconds.

The game is brutally short. It can be finished easily in 4 hours, and if you want to obtain all the Gamerpoints and Awards you only need to invest 30 minutes more. Achievement lovers can add this game to their 1000-easy-points list, as you can raise your score in little time without problems. Besides the regular campaign, the game offers a trivia section about the game contents and two minigames that are single-player only and become boring in a couple of minutes. Thus the game offers very little replay value, making a rental the best choice in this case.

Night at the Museum: Battle of the Smithsonian, aimed to the youngest of the house, is a game for those who loved the film and for parents to enjoy along with their children. The game offers a simple diversion, educational and without much action, that follows the goal of entertaining without having the ambition of going for more. Sadly, Night at the Museum: Battle of the Smithsonian is another point for the argument that games based on films aren't the best choice for your catalog. At least the experience here is not frustrating, and is over in less than the time it takes to blink of an eye.