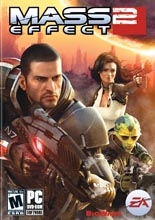 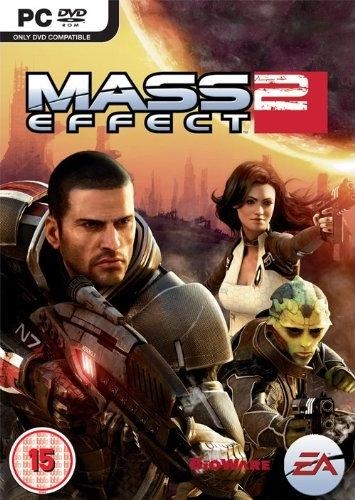 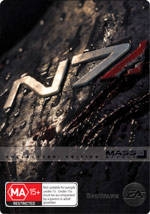 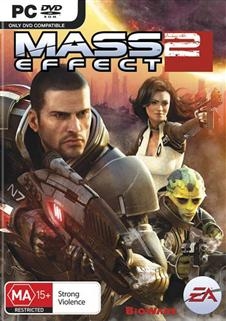 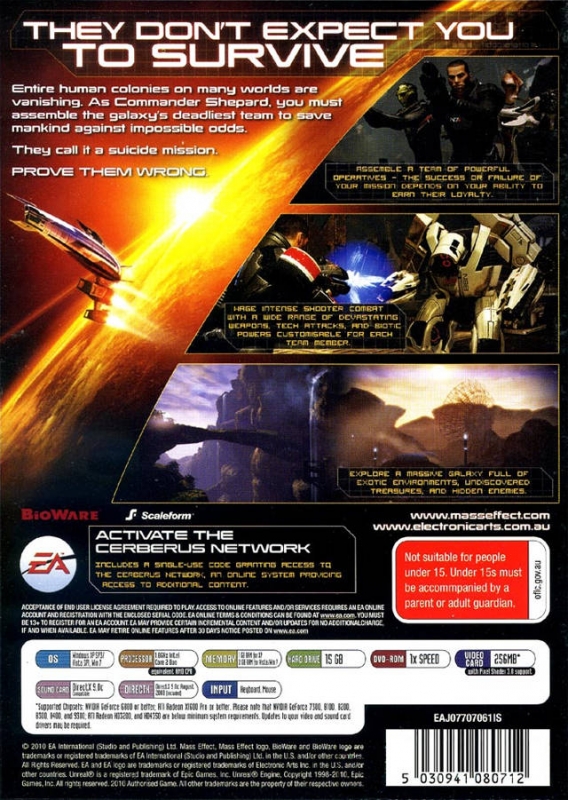 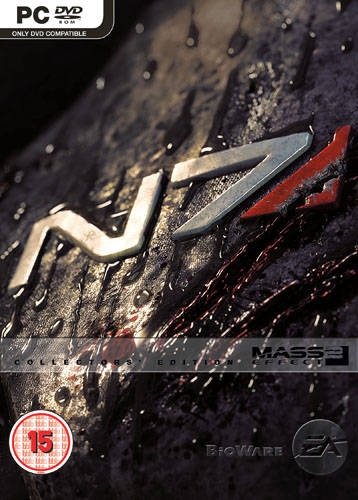 Massive is starting to seem like too small a word for the scale of this trilogy.

It’s been more than two years since Mass Effect released, and the last few months have been a mass of hype and advertising for the second game of this ambitious trilogy. While the first game was certainly great, it fell short in many ways; including lack of evolution from Bioware’s previous sci-fi great, Knights of the Old Republic. Did the sequel manage to fix the original’s issues, or is this futuristic RPG still stuck in the past?

Once again, prepare to step into the shoes of Commander Shepard, the first Human Spectre. Unfortunately Shepard’s fallen on some rough times, and after recovering for two years from massive injuries and reconstructive surgery after a disastrous battle, Shepard must rebuild his team to combat a new threat to the galaxy. The Collectors, a race of highly advanced insectoid creatures, are attacking human colonies taking hundreds of thousands of humans in the process for some unknown purpose.

Shepard has lost his allies over his two years of recovery, and must rebuild his team. Now alienated from the Council and the Alliance for spreading the news of the Reapers; Shepard must turn to a new, shadier, benefactor to supply him with the resources he needs. Enter The Illusive Man, the enigmatic leader of the extremist pro-human organization Cerberus. Provided with a new ship, a massive budget, and a good start on getting a new crew together; Shepard is off once again to save the universe from certain doom. Overall the plot is pretty good, but it doesn’t have a good shocking twist like the first. It feels like more of a stall to the inevitable final battle in the third game of the trilogy, and a way to build up more universe-changing choices for Shepard than an actual major point of development in the Reaper threat. Of course, in a Bioware game the characters and dialog are really more important than the plot.

Fortunately, in this respect Mass Effect 2 does not disappoint. In fact, Mass Effect 2 is a massive improvement on one of the weakest parts of its predecessor. Your squad is upgraded from the six in Mass Effect to ten in the sequel, and all of them are better developed than the original six. While a couple crew members return to your team, most of the Mass Effect 2 crew are brand new to the game; including one very surprising tenth crew member. The rest of your original crew (who survived the first game) will be spread out throughout the universe, and you’ll encounter each of them at least once on your quest.

Character development is very good, and even the worst of Mass Effect 2’s cast are on-par with the best of the original. There are more conversations, more unique personalities, and much better character quests this time around. On the disappointing side, conversations the characters used to carry out while on missions are reduced significantly, and most development will take place on the ship. Perhaps as compensation for this, the conversations you can eavesdrop on from the random civilians are significantly improved. A lot of information about the state of the city you are in can be obtained by simply listening, and much of the humor in the game is found in these incidental conversations as well.

With dialog options come another important aspect of the Mass Effect franchise; choices. These haven’t been improved a whole lot. Most of the choices in the game are still black and white. There are a few pretty difficult decisions scattered throughout the game, but more importantly the choices you have made in Mass Effect are finally bearing fruit in this sequel. The scale with which your choices alter the development of the universe is truly spectacular, and something that cannot be found anywhere else in gaming. I cannot stress enough the impact of seeing how your decisions in the first game affected this universe, and how much weight that adds to the decisions you make in this game; knowing they will change things further in the trilogy’s conclusion. Gameplay has been stripped down and rebuilt for Mass Effect 2. Gone are weapon skills. All weapon types have a base accuracy and that’s the accuracy that type of weapon will have throughout the game. All weapon types available to each class are unlocked automatically, and squad points gained by leveling are reserved for new skills. In combat you’ll find Mass Effect 2 plays like an extremely well-crafted third person shooter. The cover mechanics are no longer automatic, which allows for much better control of when you enter and leave cover. Weapons are accurate and responsive, and shooter conventions like headshots and recharging shields and health have been added. Every weapon type has uses, and every class has at least some solid gun fighting abilities even if they are just to augment their biotic or tech powers.

In addition to the gunplay, the tech and biotic powers are much-improved. The classes in Mass Effect 2 are the same as those in the original, but their abilities have been completely overhauled. The Infiltrator, for example, now has a stealth shield that grants them 100% invisibility; allowing them to retreat and position themselves tactically for excellent sniping. Most of the classes are useful, and they have abilities completely unique to their character that they can be trained in once they are loyal to you. Shepard can also learn the special abilities of any loyal squad member.

Outside of just leveling up, there are other ways to augment the abilities of Shepard and his squad. Armor is almost completely gone from the game aside from a few helmets and other pieces that offer minor bonuses. Instead, most of your upgrades are done through research, which you pay for by using minerals uncovered on missions and by scanning and mining unexplored planets from the Normandy. Similarly, weapons have been stripped down to just a handful of options for each weapon type. These are upgraded through research as well. Once you find a weapon, it’s available for all of your squad; Mass Effect 2 has no inventory system at all.

The missions in which all this combat takes place are extremely linear, and are designed to be played in short bursts. Even the final mission of the game isn’t longer than 30 minutes of continuous gunfights. What few branching paths there are contain items to examine or hack for more credits and research. New hacking and bypassing minigames have been added, but they are extremely easy. The advantage to this new style is the pacing remains fast, and it removes backtracking and travel from the missions completely. The main quest missions will send you to a wide variety of planets and settings, which contain more detail than those found in the original game. Of course, Mass Effect 2 isn’t entirely linear. In addition to the short missions, there are half a dozen cities throughout the universe which you can freely enter, explore, shop, and complete sidequests in. Almost all of these locations are completely new to Mass Effect 2. Even the areas of The Citadel you can explore are different than in the original game. Sidequests don’t meet the standards of variety or pacing that the main quests do, but they are a vast improvement over the stale quests found in the original Mass Effect. In addition, you can now control the Normandy in the star map; freely surveying unexplored worlds and star systems from space. Often you’ll discover new quests while doing this, as well as important resources for upgrading.

Graphically, Mass Effect 2 is an improvement on the first game, but not a major one, and while the game looks good it does not compete with the top contenders in visual fidelity on either PC or Xbox 360. There is a nice variety in the game’s environments, and some incredibly epic moments throughout both in-FMV and the in-game engine cinematics; including an amazing final boss battle. The game runs quite well. Even medium PC rigs can run the game on maximum without many issues, and the slowdown, pop-in, and screen tearing from the 360 version of Mass Effect are all but gone entirely. The added negative is some very heavy loading. This can be alleviated some by installing the game, but is still well-past acceptable length. Overall however, Mass Effect 2 features an excellent visual presentation.

The audio presentation is nearly as impressive. Voice acting for Mass Effect 2 is amazing, and at the top of the industry in quality of delivery. This is even more impressive given the thousands of lines of dialog recorded for the game; a much more massive script than that found in the original. The music is appropriate for the game, but still largely forgettable. There are a couple tracks that will stick in your head however, and all the music sets the atmosphere for the rest of the game quite well.

If you haven’t figured it out yet by the fact that this is the longest review I’ve ever written, Mass Effect 2 has an enormous amount of value. The main quest will run most people 25-30 hours on normal with almost no side-questing, and there is potential for easily 50 hours plus for a complete run-through. Even more impressive is the massive replay value gained from how different your experience can be with different choices. This is especially true if you import two different Mass Effect save files, one for Paragon and one for Renegade, to see how you have changed the universe. This is the epitome of RPG value. It’s amazing what difference two years can make in a franchise. Mass Effect has gone from a great game to an unforgettable one. However, this is mostly due to how incredibly well it built upon the decisions you made in the first game. Mass Effect 2’s enjoyment is more dependent on playing its prequel than any game I have ever played. I strongly stress that most of the value from this game comes from playing this after playing Mass Effect with an imported character. The impact of the game’s plot, characters, choices, and universe will be significantly less if you haven’t played the original. If you haven’t you’ll enjoy the outstanding gameplay, but if you have, prepare for an experience of unmatched scale.