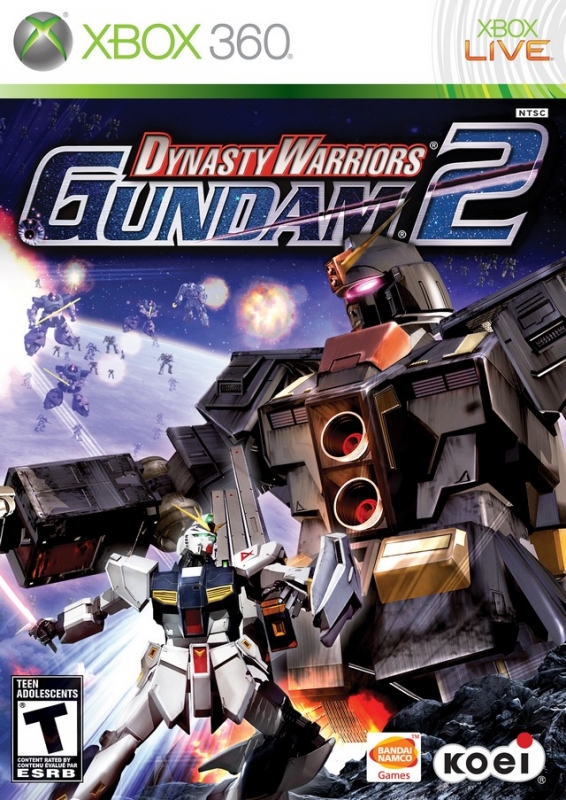 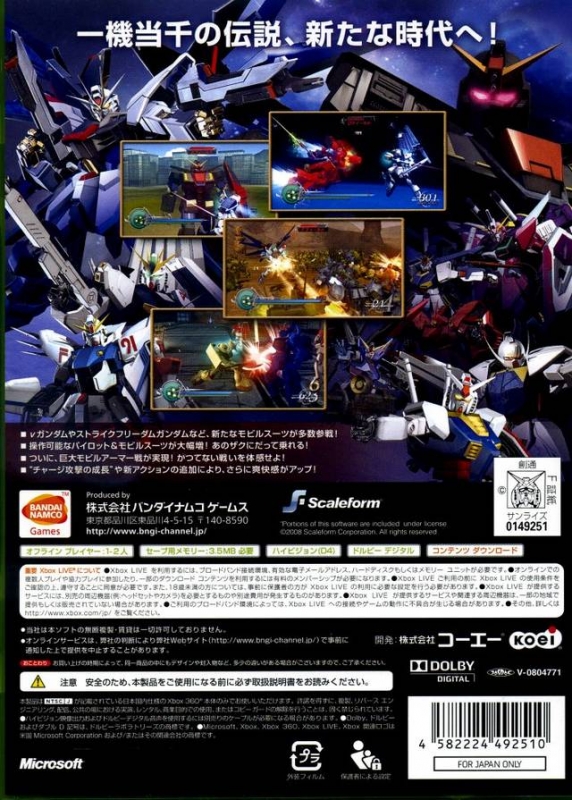 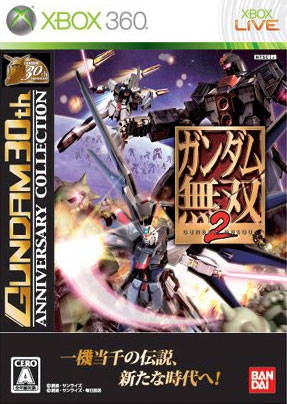 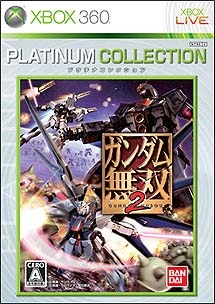 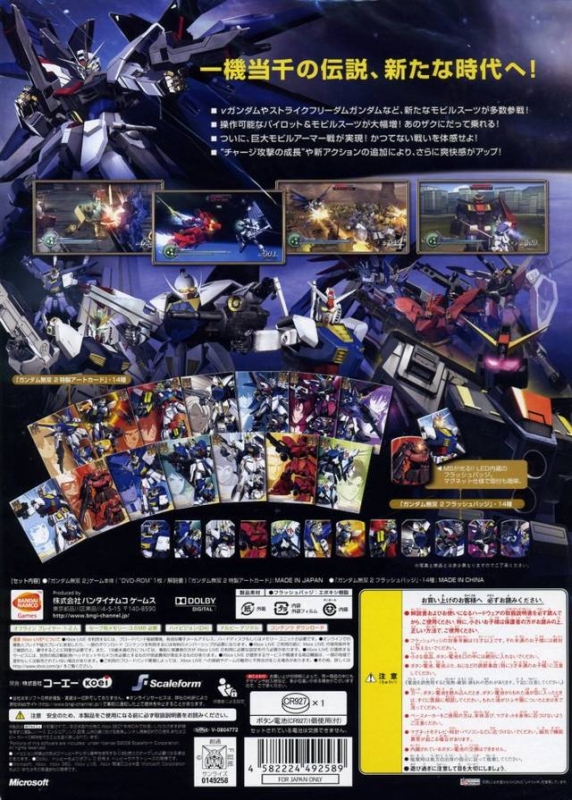 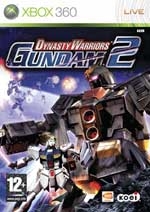 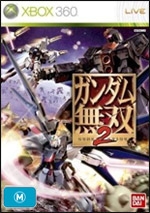 When you take the button mashing mindless fun that is the Dynasty Warriors franchise and merge it with some giant robots, one word comes to mind – awesome!

Let me lie out in the open that I am a huge fan of the Gundam series and have been for a long time. The history of Gundam videogames can be summed up as a mixed bag. While some are pretty good, others have the usual flair of being typical confusing licensed anime games that only the hardest of hardcore fans will love. As much as it annoys me that Bandai seems to ignore the western world with a lot of its Gundam games, I have come to understand that the ones that did not come over stayed in the east for a reason. The original Dynasty Warriors Gundam broke this trend and was usually praised despite being branded with the bemoaned “Dynasty Warriors” label. A few years have passed and Namco Bandai and Koei have teamed up again, but how does this merger stack up a second time?

Dynasty Warriors Gundam 2 has everything to make it a dream come true for Gundam fans, and possibly a nightmare for casual or non-fans. The game follows in the style of previous Dynasty Warriors and Samurai Warriors games as an action-oriented hack and slash game with some tactical elements. However, both Dynasty Warriors Gundam games have unique gameplay mechanics and twists that set them apart from the core Dynasty Warriors series. First and foremost, the game has at least two characters and “mobile suits” (the general name for the mecha in the Gundam universe) for every Gundam franchise minus two (Sorry Gundam X and Gundam 00). For those not in the know, that’s a lot of mobile suits and characters to keep straight, around 60 suits or so alone. This attention makes the game fairly awesome to relive past storylines, and confusing in the sense that when I began playing I just knew that a convoluted “all Gundams in one universe” storyline was about to rear its ugly head.

The game consists of a handful of modes, all of which contain hours upon hours of gameplay. First and foremost is the “Official Mode” which chronicles the Universal Century era of the Gundam universe. In Gundam there are two types of timelines: ones that fit into a chronological order, which are called Universal Century and Alternate Universes, which includes Gundam Wing, G Gundam, and Gundam Seed. These Universal Century storylines follow a small, yet engrossing set of characters starting with Amuro Ray and Char Aznable, the two main characters of the very first Gundam show. Next up we have a “Mission Mode” which pits pilots from all Gundam universes together into a “cohesive” storyline, which as you probably guessed is the mode that makes no sense, yet is really fun. I especially like playing this mode as Gundam Epyon, the antagonist from Gundam Wing. Finally, there is a versus mode and all of the special options like video viewers and such.

While the Official Mode is mostly storyline based, Mission Mode is the largest chunk of gameplay and will take up the majority of your time. Not only are there story missions, but also collection missions where you must collect the pieces of a mobile suit, friendship missions, which strengthen your ties to your allies, and license missions that allow you to pilot new mobile suits. The friendship missions are pretty cool because in this game you have to keep tabs on other characters' alignment towards you. If you horrendously whoop someone they will begin to hate you and move down on a scale into increasingly bad scales of hate, but if you do the opposite, they will trust you more and become stronger allies. This is important because you have to meet certain relationship requirements to open certain stages, so keeping tabs on this system is a must.

On either mode a basic round of this game consists of you and any ally CPU or second player (you can play two-player on most missions) trying to take over small quadrants of the level that are inhabited by hundreds of baddies. When you rush in you are given a completion bar that decreases as you blow up the opposing side-usually this is followed by some sort of minor boss fight, and you claim the quadrant as your own. At anytime the table may turn, and you may have to backtrack to a previously finished section, but those instances are few and far in between. This gets confusing sometimes because you will be fighting, and all of the sudden a pop-up will say “Mission objectives have changed – kill the random six guys that just popped up”, and you have to drop everything and follow suit. On top of that some characters will spout off things that only make sense in whatever Gundam universe they are tied to so this comes off as a jumbled mess sometimes unless you know exactly what is going on. In the mission or story mode a second player can jump in before the game begins to help out. This two-player action is very fun and helps the harder missions out considerably.

Keep in mind that at its heart this game is every bit as much of a mindless button masher as the other Dynasty Warriors games. You do a few attacks by alternating between your two action buttons, hold them down for a powered up attack, and build energy for special or combined special attacks. This is simple in execution, but is pretty fun to master no matter what the trendy types will say about the franchise.

Aside from the changes above with game modes, there are a few other changes you will notice in this game compared to the last. On the boss battle front, this game is notable for the inclusion of colossal mobile armors serving as some of the game's bosses. The mobile armor on the front of the game case is the Psycho Gundam MK III, which stands around ten times taller than any character you can pilot. This really adds to tense situations when these bosses come out and tower over you. Other additions include a better AI system than the previous game and better 2D characters for intermission scenes complete with alternate costumes.

While not the pinnacle of HD gaming, the graphics in this game are pretty good for a Dynasty Warriors game, and are improved over the last game. Since the game is running on the same engine I’d expect no less. While playing, I never really had a problem with pop-in or draw distance as I did in the last one, which shows the improvements made on this game. Overall, for a game running with hundreds of bad guys on the screen at once, I feel that this game runs fine. I would have loved to see a bit more polish in the graphics department, as it does not really scream HD as much as it should, and aside from the pretty lights, is not a whole ton better than the PS2 version. These issues with the graphics only get worse when you engage in some multiplayer action, as the draw distance seems to be halved and the pop in starts to really show up. The multiplayer is otherwise fun, but the problems could deter some.

Dynasty Warriors Gundam 2 has pretty good voice acting and sound, but omits the Japanese language track for some unknown reason. I would imagine that it was because the non-Japanese versions of the game got an updated versus mode, but the developers have not said why. The voice cast appears to be largely the same as the cast used in the show, but the voice direction is sometimes off, especially when it comes to the pronunciation of names. This could be me just being nit-picky, but when a character is named Ramba Ral (pronounced as if it was rawmba rawl) and Amuro starts saying “Hey look! It's Ramba Ral” but it has a hard A on all vowels like the A in the name Sam. This in no way detracts from the game though, as it is very minor and I can’t expect a voice actor that voiced a character eight years ago to remember how to pronounce every single name with limited involvement from Bandai.

Unlike its PS2 counterpart the HD version of this game shipped at full price, which in my opinion really hurts it. You do have a massive amount of game for the buck, but I had a real problem with the discrepancy. The Official Mode alone takes almost ten hours to complete if you want to get everything, and the Mission Mode has 60 mobile suits. If you were to play this until you reach 100%, I’d assume that the game would clock in comparable to most modern JRPGs in around 60 plus hours. This is all based on how long you would play the game however, as I’ve stated above. Since this is a Dynasty Warriors game, some will get tired of the repetitive nature of playing it, and drop it long before being done, but I personally loved the game, and am trying to get all of the hidden stuff personally. If you get tired of the regular stuff the game offers, there is also a fairly deep multiplayer mode available. This mode has two different matches- a ranked match or a player match, which carries no rankings.