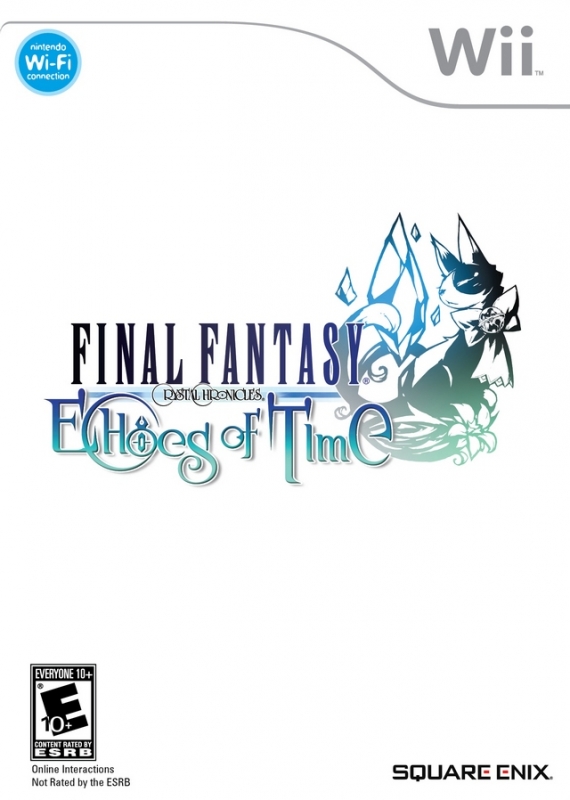 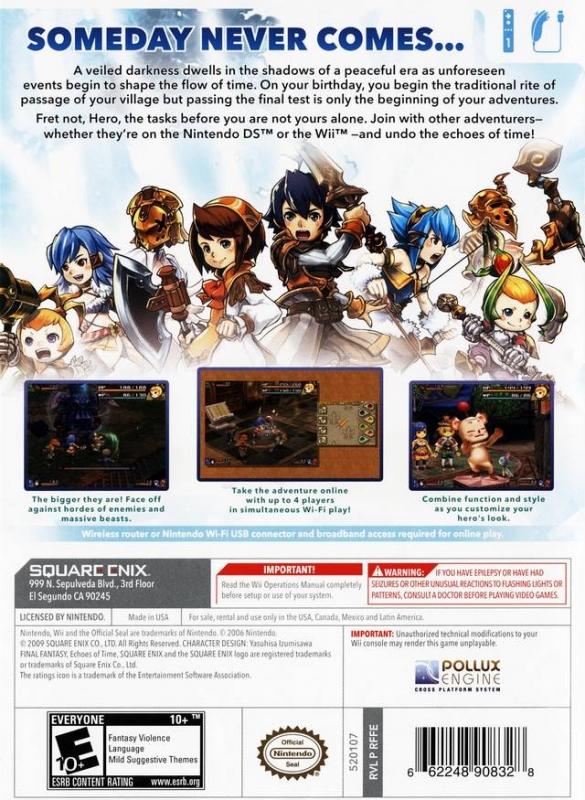 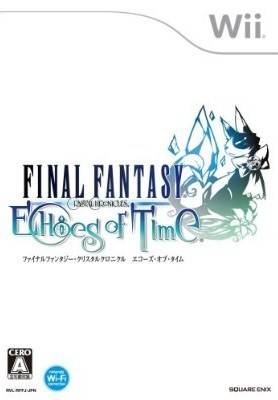 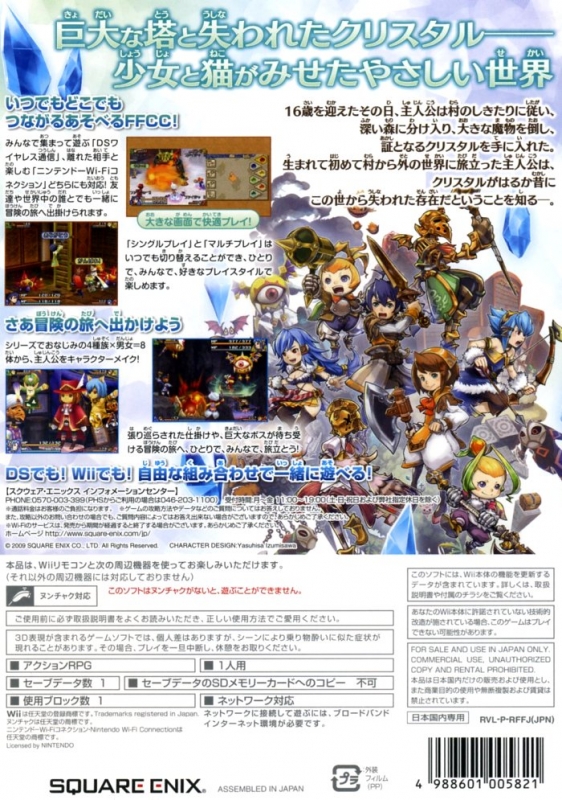 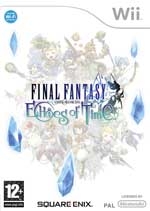 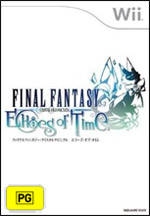 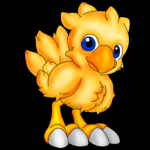 The Final Fantasy multiplayer action continues on the go on your - oh wait this is a Wii review!

Final Fantasy Crystal Chronicles: Echoes of Time is the second installment in the Nintendo-exclusive offshoot series to grace the Wii. This time around the title boasts an all new original story and enhanced multiplayer options including cross platform play with the simultaneously-released DS version.  On the dual screened handheld, this is a fun dungeon crawler which incorporates simple action oriented role-playing elements with great design that begs it to be played via four person multiplayer, either online or off. On the Wii it’s exactly the same game--and therein lays the problem. It’s exactly the same game- two screens and all. That’s not to say the two deliver the same quality experience, because the game was built around the DS, the Wii iteration definitely pales in comparison.

First thing you will notice booting this game up is a long initial loading screen. After this two adjacent screens mimicking the DS appear and the game begins. The left screen corresponds to the top screen of the DS and the right represents the touch screen. This is the game's most immediate and primary flaw. It’s just not fitted to the Wii. Everything from graphics to the gameplay that seems suitable for the handheld comes off as lazy and inappropriate here. The Wiimote is used to point and click buttons on the touch screen but comes off as unwieldy. The + and - buttons are used to alter to zoom on the dual screens but neither can ever take up the full screen which can be particularly annoying when selecting options on the second screen.

The game starts by having you select your character from one of four classes of warriors, before whisking you away to your home village. From the onset the story is reminiscent of traditional JRPG affair as your hero must complete a trial to signify the coming of age on their 16th birthday. This leads to your first interaction with the combat system and basic dungeon crawling mechanics of the game. The controls feel awkward because of the Wiimote-Nunchuk combination which forces you to keep the sensor pointed at the screen to utilize the touch screen. The A button strikes, B jumps, and C on the nunchuk is used to cast magic. Movement is controlled by the analog stick, which can be configured to your liking but still feels uncomfortable because of the blocky 3D level design. Time after time, the jumping mechanics clashed with the analog control, forcing my characters to miss platforms or unintentionally grab onto enemies.  The style of combat best suited to the player is determined by the warrior class chosen. Clavats are your master swordsman who specialize in melee based attacks and are adequately capable when it comes to performing magic. Yukes are your mage class who make up for their paltry melee skills by being extremely adept at magic. Selkies are the agile warriors who move faster and jump higher than the other classes, which come in handy during some of the touchier platforming sections. Finally the Lilties are short creatures who prefer heavier weapons such as axes and spears over swords. Each class plays uniquely enough to keep things interesting and don’t worry about your original class choice stopping you from playing as the other classes, because that opportunity is more available once you assemble your party in the single player.

After your initial trial in the forest, the story begins to reveal itself when a young girl from your village falls mysteriously ill. Newly christened an adult, your character is tasked with retrieving the antidote by traveling to a nearby town and completing quests for a shadowy scholar. From there the story takes the appropriate twists and turns to keep you interested, with a plot that involves the secret past of your village, sinister immortals who roam the land, fragmented crystals, and the origins of our silent protagonist. Yes, it’s all familiar JRPG fodder, but its decently crafted fodder and the script can be downright witty at times.

All of the 3D action takes place on the left screen and graphically the game looks horribly dated for a console game. The environments and art direction are crafted with an appropriate layer of detail but fails to compensate for the lackluster visuals. The inhabitants of the world, human, monster, or otherwise also rendered blocky like their DS counterparts. Because this is a Square Enix game, fully rendered 3D cut scenes are used to convey important story scenes. Though there are quite a few of them, they too look are formatted according the specs of the handheld. It is quite disappointing that not even these were updated according to the Wii’s capabilities. The developers of this title made sure this was a strict emulation of the DS version and that includes the frustrating slowdown, even though it is less frequent.

In regards to audio, the game fares about the same. The cut scenes feature full voice acting which is a mixed bag of good performances and a comically bad German accent. The music is pleasing and stirring throughout, but some of that charm is lost as most of the audio presentation sounds quite empty coming through any decent sound system.

The role-playing mechanics are simple and intuitive for both newcomers and veterans alike. Your skills increase as you level up and can be customized by altering the equipment and attire of your character. If you plan on playing through the game by yourself as opposed to multiplayer, you are granted a certain amount of freedom when assembling your party. By going to town you can customize them to your liking, choosing up to three members from any of the classes who you can control on the fly by clicking their icon on the right screen. The mechanic feels intuitive on the DS, but on the Wii it can be a bit unwieldy because you have to alter the zoom on the screens in order to choose the exact party member you wish to control. The computer AI controls the rest of your party and the player caninstruct them how to act with options such as Just Follow Me and Go Nuts With Magic. Yes, the game is a bit light when it comes to role-playing, which makes you wish there were more choices and options available, but what is here serves its purpose.

In relation to its DS predecessor, Ring of Fates, Echoes of Time does address a few of that game’s problems. Most noticeable is the streamlining of the game’s magic system. No longer are you required to possess special items in order to pull off magical command because the faithful MP bar returns and can be replenished with potions. Magic is much more useful during combat and essential to completing puzzles whether by freezing water so you can walk across, or setting fire to explosive barrels to clear pathways. Other improvements include better looking dungeons (on the DS), swimming and water based combat, and a more stable local multiplayer experience. On the downside, a sizeable percentage of this game’s enemies are recycled from Ring of Fates.

In spite of everything else, it’s the classic dungeon crawling feel of the gameplay that makes Echoes of Time notable. Once the main game begins the dungeons come at you nonstop one after another the only breaks being to replenish your supply and restore your condition by going back into town or heading back to your village for story events. The dungeons follow familiar themes- forest, sewers, ice, and fire- but are still fun to traverse. They all follow the same basic rubric of clear a room of enemies and puzzles to advance to the next room until you eventually find a key to the dungeon boss. The combat feels satisfying as does collecting the items left behind by fallen enemies. Fighting actually feels quite similar to Square’s Kingdom Hearts series as you hack, slash, and cast magic (mostly cure). Casting magic is accomplished by pressing the C button and guiding the cursor ring to the intended target. Magic is very useful during combat and essential to completing puzzles, whether by freezing water so you can walk across, or setting fire to explosive barrels to clear pathways.

This game features enemies that are both insidious and aggressive. They pose a fair threat at times requiring a certain amount of strategy to defeat. The bosses aren’t quite as shrewd because most, if not all, of them can be defeated easily by hacking and slashing at their backs repeatedly. Sadly though the computer AI is the weakest found in the game. No matter how well you configure them they perform stupidly in action. Often times they will get in the way of completing puzzles and will be the first to die leaving you to clear the dungeons by yourself, deeming it not worth the effort to revive them. For the most part the dungeon exploration is enjoyable the only drawback being that the puzzle types become too familiar early on and the camera can sometimes get in the way during segments that require well timed platforming.

The adventure only lasts about 15 hours, a bit on the lean side for a console, but is supplemented by plenty of available side quests, secrets, and unlockables. Thanks to multiple difficulty levels and multiple areas to explore, the game holds up through a second play through. Additionally the game features some robust multiplayer options giving a good incentive to keep playing. The Wii version lacks any significant extras, with the exception of Mii support. You can stick the face of your Mii on any character allowing them to go along for the adventure. I thought this would be a fun thing to see, but instead it falls flat as your Mii creepily clashes with the game’s visuals.

Either online or locally, you can team up with other players to clear through the adventure mode. Once you have your party of like-minded players gathered the game really hits its stride. Echoes of Time was meant to be played in multiplayer and it shows. Freed from the shackles of dimwitted AI, dungeons become more straightforward and entertaining to complete. The entire game can be played this way by either visiting the worlds of other players or inviting them to your own. Disappointingly there is no way to transfer your Wii character to the console of another Wii owner locally, a freedom the DS enjoys. Any items, experience, or skills you attain stay with you after returning to the single player mode. Communication is key and quickly accessible pre sets, like those found in Super Smash Bros. Brawl, help keep the lines of interaction open. Lag is sometimes prevalent and can mar the experience of the online multiplayer if it persists.

As stated above an identical DS version of this game is available. The DS and Wii connectivity is fully utilized between them. DS and Wii gamers can play together, either through Nintendo Wifi or locally and the experience on the DS stays the same. Compared to the DS game, the Wii version of Echoes of Time is inferior thanks to inappropriate scope and awkward controls. The game just feels more at home on the handheld it was originally built around and it’s disappointing that this game was not developed around the Wii’s unique capabilities.

Final Fantasy Crystal Chronicles: Echoes of Time feels like a lazily conceived project designed to cash in on the license, which is a shame since the core game can still be somewhat enjoyable. But technical drawbacks, the familiar story, poor controls, and some gameplay elements leave plenty to be desired. This is a no-brainer--if you absolutely must play this game, go for the DS version.