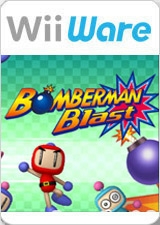 For the past two decades Bomberman has been something of a staple for classic multiplayer action in videogames. Usually reliable for a good gaming experience, the series added some less than stellar entries as time progressed, in an attempt to reinvent itself. This trend included the critically panned Bomberman: Act Zero and earlier Wii release, Bomberman Land. I’ll admit that when I downloaded this game I was not sure what to expect and began to wonder if I would have to resort to snide jokes at Bomberman’s expense when reviewing this game in order to make it interesting. Luckily that is not the case because Bomberman Blast is a really well put together game that provides all the options necessary for a fun multiplayer party experience. But if you expect an equally strong solo experience, you may want to look elsewhere.

Bomberman Blast is a relatively simple game. It's not bogged down by a single player mode or pesky puzzles to complete. This is a pure multiplayer game that brims with creativity and charm. The game supports up to eight players online and locally via a combination of four Wiimotes and Gamecube controllers. When using the Wiimote the controller is held horizontally like the classic NES gamepad, which keeps the controls straightforward. Shaking the Wiimote activates select power-ups which are accomplished on the Gamecube by pressing the triggers alternately. Both control styles work equally well and use depends solely on personal preference.

The core 2D gameplay is basic yet frantic. Eight players compete on a grid based map, strategically - or haphazardly, depending on play style - placing bombs in an attempt to eliminate the competition until they are the last Bomberman standing. Clever level design and a cavalcade of unique power-ups spice things up substantially. The ten maps present are unique and fun to play on. The level themes vary from your classic map to aliens, bowling and zombies. That’s right, I said zombies. There is something to be said about a game that nails that cartoon feel and uses it as a supplement to the gameplay. Each map alters how the Bombermen blow each other up. For example, the raceway stage increases the game speed to a such a high level that the game almost becomes too frenetic to handle. The subtle touches used in the design of each map come together to provide a strong pool to choose from and develop your own favorites.

The 20 items that scatter themselves around the playing field are similarly varied. Collecting them enhances your character’s abilities by allowing the player to punch away bombs, increase running speed, or shake the remote to produce a shield or fly up into the air should you ever find yourself in a tight spot. The problem with the items is that too many of them litter the field, sometimes making it hard to keep track of the ones you pick up, so you are unaware of what you can and cannot do. This results in the player occasionally shaking the living daylight of the Wiimote expecting to fly away from the blast of nearby bombs only to be disappointed and die as a result. Death, however, does not necessarily mean the player is completely eliminated. In most game modes the Bombermen are allowed to travel the perimeter of the map and throw bombs at the surviving players. If you eliminate one of them the reward is being reinserted into the fray. Even though it may not be permanent, dying is still an annoying experience especially when it's self inflicted, which will happen often.

Bomberman Blast tries to disguise four game modes as six. Normal and Team Battle are nearly identical, and Surprise merely chooses and shuffles between the other modes. The four real game modes are nicely executed. Normal Battle is the classic play style gamers have become accustomed to, and remains fun today. A word of caution, unless the player is an expert and can predict the actions of the AI they shouldn’t expect to win when facing seven computer opponents. In fact if you ever do win, go outside - you may find a four leaf clover because it means you are extremely lucky. Air Raid is all about staying out the path of raining bombs and surviving as long as possible. It requires a keen eye and awareness of your position on the field. King mode has the Bombermen scrambling for a golden crown, blowing each other up in order to attain it. The winner being whoever possesses the crown when time runs out. Countdown mode places a timer over the player's head if they should be blasted and when this timer runs out the player is eliminated. The twist here is that your timer is swapped with the condition of any player you come into contact with, making this mode the most strategic, so you can theoretically win by blowing yourself up.

The presentation here is notable for a WiiWare title. The game certainly looks good, and Bomberman’s interactions with the world are well animated. The music is zany and generally reminds me of the themes played in the Everybody Votes Channel. The game also does a fairly impressive job of tracking player stats both online and offline, as well as giving the ability to customize your profile. There is also unlockable Mii support, which adds a personal touch to the mix.

The multiplayer is great, plain and simple. Getting seven friends to play with locally is frenzied, chaotic and fun. You won’t mind losing to friends nearly as much as the computer. If you choose to play over the Nintendo Wifi Connection you will be happy to know that nearly no sacrifices in presentation are made when jumping into the online arena. All game modes are available and you vote for levels and modes. The server always tries to assemble a full game and while you are waiting allows you to play a short mini game called Bomb Dodge. You're alone on a single map and your objective is to avoid as many bombs as possible. It's another little touch that adds to the experience. Your performance is ranked on the leaderboards should that interest you. Lag is generally not a problem and the online is more interesting than playing alone.

For only 1000 Wii points (~$10/£7.50) this game delivers bang for the buck. In honesty the game is just the multiplayer mode ripped from Bomberman Land, but that’s forgivable because it delivers exactly what is wanted from a Bomberman game. If you intend to enjoy the game solo there is a chance it will go ignored for long stretches of time. But ultimately, Bomberman Blast is a great party game to have stored on your Wii in case you and your friends ever feel the need to play something in between games of Mario Kart Wii or Super Smash Bros. Brawl.