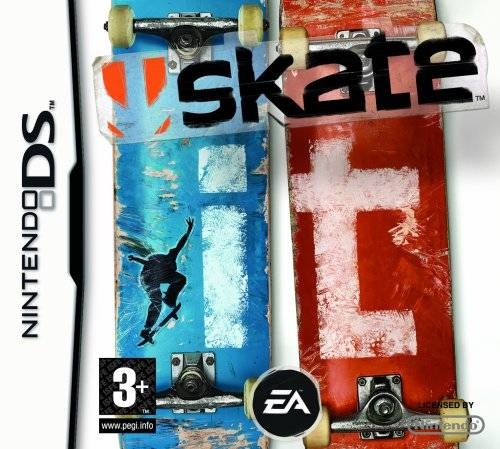 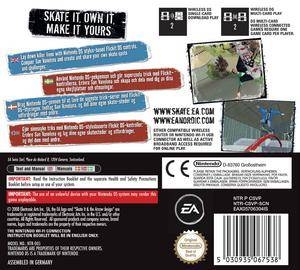 EA’s young Skate series sees its first instalment on the Nintendo DS. But is it a must-have for Nintendo DS owners?

First of all: What is Skate it all about? It’s rather simple: You’re a skater in the city of San Vanelona and you want to make some money by performing amazing lines and tricks. Always on your side is a guy with a camera, filming all of your flips, ollies and grinds. His plan is to shoot the best skating movie the world has ever seen and you are the leading character. Sounds nice, doesn’t it?

The DS version of the game is a decent effort. The game is introduced with some skate videos and the well done menus supported by rock and punk music will make skating fans feel at home right from the first second. Add a customizable character to that and you get a typical EA game.


There are multiple playing modes in Skate it: You can choose the main single player mode, multiplayer (even with one cartridge!), free skate, my spot (the level editor)… the number of modes is rather big for a DS game.

The main mode features more than a dozen locations . You’ll not only skate through San Vanelona but also visit cities like Paris and London. The focus is clearly on San Vanelona, though and the city features locations like a school, the outskirt area of a library and many more.

The game is controlled by a combination of Touchscreen and Buttons. Basically, your stylus controls your skateboard. At the centre of the Touchscreen you’ll see a picture of a skateboard. Moving your stylus over the picture makes your skater perform different stunts: Lines are for the simple tricks (ollies, nollies and so on) while more difficult “drawings” are booked for stunts of a higher difficulty. You can also tweak your stunts by doing grabs with the L or R buttons or doing a 180 / 360 by pushing the D-pad (or the A/BX/Y buttons if you hold the stylus in your left hand) left or right. It is a bit overwhelming at first but after some time you’ll get used to it.

But be aware: you shouldn’t expect an easy game with Skate it. The controls really take some time to master, even though they’ll grow on you after a certain time. Challenges aren’t easy, either: There are races against other skaters, checkpoint races, the typical “get xxx points” ones, “S.K.A.T.E.” challenges (you know that: Each turn you loose will get you another letter and the one who has completed the word “skate” is the loser) and sometimes you have to perform a certain stuns or a certain line of stunts to get to the cover of a magazine. The guy with the camera helps you out in those cases but you can’t take the pictures by yourself. The tasks Skate it offers are quite diverse. All challenges have one thing in common, though: A rather big difficulty level. Don’t be surprised if you need half a dozen tries before you win a challenge. It can happen. All in all the gameplay is really good, though. You just need a lot of practise: Timing is all and the game clearly acts like a simulation at times as it forces you to be amazingly precise with your timing.


Skate it also allows you to watch the last 10 seconds of your gameplay at any point in the game. This isn’t a huge feature but if you performed an amazing line or had a funny crash it’s sometimes cool to watch it again.

Multiplayer mode works decent as well: You’ll only need one cartridge and you can skate through several locations from the game. It is possible to start some challenges in each level but I was under the impression that free skating is the main factor of the multiplayer mode. My girlfriend also liked it so EA apparently did a decent job. Online also works well (besides some lags) and I had a lot of fun but you will need some practise to win against the better players when you play via wifi. All in all online was really great for a DS game.

Something that needs to be mentioned as well is the nice level editor: Of course you can't compare it to the level editors found in the console versions of the game but there is a huge variety of things to use. You can also upload your own spot or download spots from other people via online. If you like to build up your own skate parks you can now do it in the bus or the train, as well. Definitely worth it.


The technical side of Skate it is almost as convincing as the gameplay, even though there are some flaws: The graphics are nice and I hardly ever experienced framerate drops. The animations are well drawn and are clearly among the top ones on the DS. It only gets a bit weak when your character chrashes as the bail-out animations are rather rough and your skater will often fly mid-air after a crash but that seems at least partially caused by the weak DS hardware and I still had fun watching my skater crash into just about everything. There are some really detailed textures, but you’ll also see rather empty areas, with minimal texture design and a lack of detail. The faces of the skaters are rather rough but you won't notice that too much in the game. All in all the graphics are above average but they are still lacking in detail and polish at times, and it can sometimes be difficult to distinguish between certain objects.

The sound is a different story, though: The tracks in the game are being presented to you in good quality and for those of you who like rock and punk they will clearly do their job. Where the music lacks is the quantity: Four songs (!) are just not enough in today’s time which surely lowers the score. The environment sounds are nearly non-existant as well. Quality over quantity, right EA? Oh well…

So what do you get with Skate it for DS? This is a solid skateboarding game with a lot of options and addictive gameplay but a high difficulty level. Personally I never owned a Tony Hawk game myself but I often played and liked them. I like Skate it as well, maybe that goes for you, too. The focus on realism clearly gives the game a unique feeling and people with a bias for sports games can’t get wrong with it. Just remember that you’ll have to put some effort into it! There surely is a learning curve in this game but after some hours of frustration you will get better and better and in the end local multiplayer with a single cartridge, the detailed level editor that let’s you save up to 3 files and the diverse gameplay overweigh that. And while the campaign mode is just average when it comes to length online and local multiplayer, the level editor and the free skate option really add a lot of playtime. Highly recommended if you’re a fan of trend sports games.