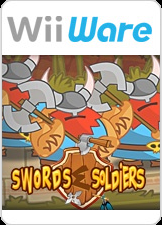 Swords & Soldiers is a real-time strategy game (RTS), available exclusively via Nintendo’s WiiWare service for 1,000 Points ($10/£7) and developed by the small team at Ronimo Games. What’s unique about Swords & Soldiers as an RTS game is that it’s built to function perfectly both as a console RTS and as a downloadable game. Key to this success is the use of a side-scrolling 2D battlefield, where individual units are completely computer controlled. This frees you up to focus on a few core tasks - you manage both your monetary resources and your energy/mana supply by deciding which units are built, which upgrades are bought through the tech tree, and by controlling most of the spells you’ll see in the game – the overall effect is an RTS that’s much more console-friendly than we've often seen in the past, although it's also less complex and strategic as well.

The campaign mode gives you the opportunity to play as one of three different factions: the Aztecs, Vikings or Chinese. Each faction has a story that spans 10 missions. Missions vary from standard ‘destroy the enemy’ battles to completing certain objectives, such as surviving for a set period of time or reaching the end of the map with only a limited number of units and spells. It’s this level of variety, as well as a superb difficulty curve that increases at a steady and even pace, that gives you the incentive to carry on playing through the campaigns. 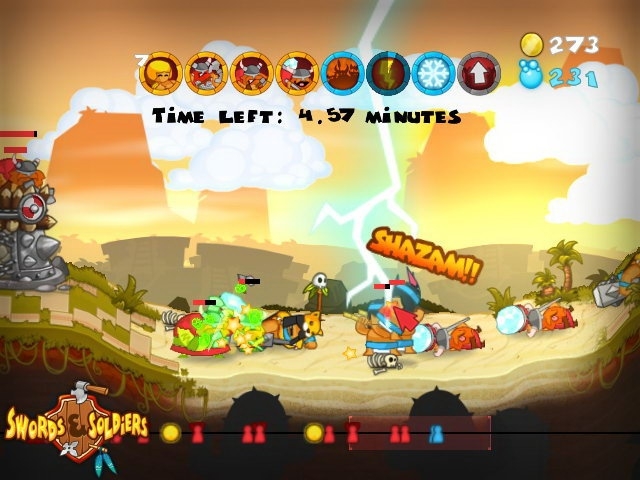 Levels consist of simple 2D battlefields, with your base on the left side of the screen and your enemy on the right. Scrolling the battlefield is simple, you can either use the Wiimote to push the cursor to the edge of screen or, like I do, you can use the D-pad. To kick things off you will need to purchase workers to mine for gold. As with all of the units in the game, once purchased the computer takes control of them and makes them perform their relevant duties on their own without any player input.

As with most RTS’, once you have enough resources coming in you’ll want to focus on the tech tree, which is unique for each different faction. Tech trees consist mostly of units and spells (as well as a single building for each faction). Units vary from standard melee and ranged fighters, to specialised casters and heavy warriors. Each unit has its own strengths and weaknesses when set against the enemy equivalent, and the key is to maintain a strong combination to counter the units your enemy makes. Purchasing a unit (or anything else in the game for that matter) is a simple matter of pointing the cursor at the appropriate icon and then pressing the A button. Again, it’s important to stress that once purchased the unit functions autonomously in battle, fighting its way from the left side of the screen to the right without player control. 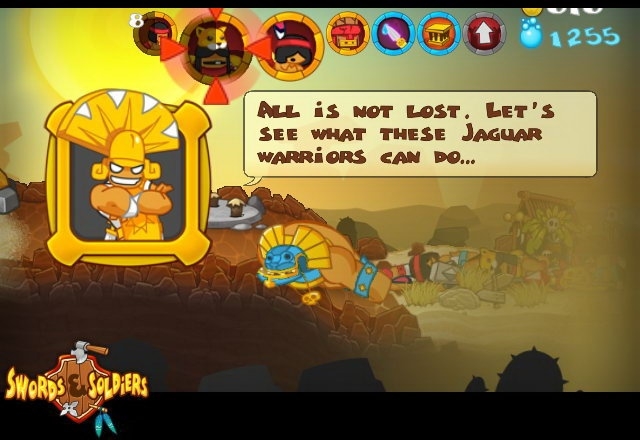 That doesn’t engage you much in the battle, though. This is where the spells come in. Each faction has four standard spells and one spell with the potential to cause huge amounts of damage to the enemy, the best of which has to be the Aztec’s boulder spell, which sends a boulder hurtling across the battlefield, knocking down everything in its path (including your units, unless you manage to press A in time for the boulder to jump over them) until it smashes into a solid structure. Other, more standard spells include things like the Viking ability to strike an enemy unit with lightning, the Aztec ability to perform mind control and turn an enemy unit against his own side, and the Chinese ability to rain arrows down on the enemy. The good thing about the spells is that they’re completely controlled by the player (unless they’re spells that come with a unit, such as the Aztec Necromancer, in which case they’re triggered automatically), and this is how, along with selecting the combination of units and upgrades, you are able to make an impact on the battlefield.

The controls are thankfully kept simple; you only ever use the Wiimote's pointer, the A button and the D-pad, and this helps to make Swords and Soldiers a very accessible console RTS game. One thing that’s briefly worth mentioning is that the icon for a unit or spell will pop-out when the cursor glances over it, which helps to reduce the potential for accidentally selecting the wrong unit or spell. Whilst this doesn’t eliminate that potential problem altogether (because in their standard line-up the icons are quite small), you’ll quickly find yourself adapting to the controls and rapidly reeling off spell and unit selections without hesitation. 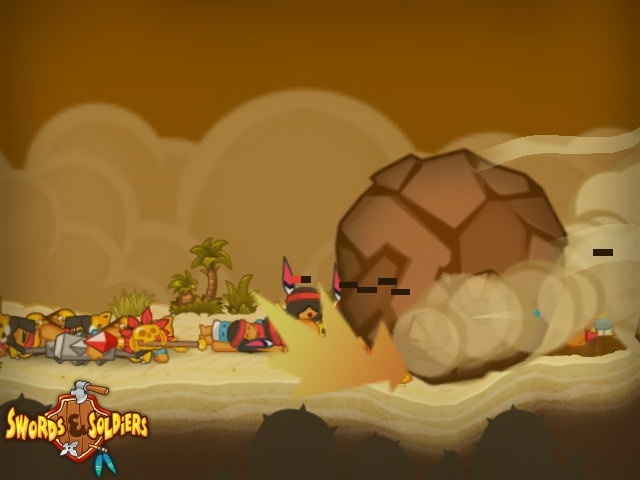 Swords & Soldiers has a colourful cartoon-like graphical style. The story is presented in the form of simple text boxes, and there’s a pleasantly nonsensical, tongue-in-cheek humour to the writing. Whilst there’s no voice acting, the units themselves do make distinct sounds when purchased, and the sound effects for units and spells are unique and satisfying. The music fits the battles well, but quickly becomes repetitive. The animations are quite simplistic, but the screen comes alive with activity and colour when a battle is in full swing, with masses of units engaging one another in the middle of the battlefield and spells being cast frantically. Overall, where production values are concerned, this is certainly one of the more impressive WiiWare games.

At 1,000 Points ($10/£7), Swords & Soldiers is pretty good value for money considering the amount of content on offer. You get a story-driven campaign mode, spanning three different factions, which should take a good five or six hours to complete. On top of that there are also three single player mini-games (called challenges) which you unlock as you progress through the campaign. The Chinese mini-game is a survival game, a concept that’s taken from some of the missions you complete in the campaign. The Aztec mini-game is based on their boulder spell, where you’re challenged to crush the enemy units whilst trying to avoid your own units. Finally, the Viking mini-game is the most interesting one, here you’re given control of just a single unit and the goal is to negotiate a course of enemy units, utilising the spells you’re given and unlock during the mini-game. 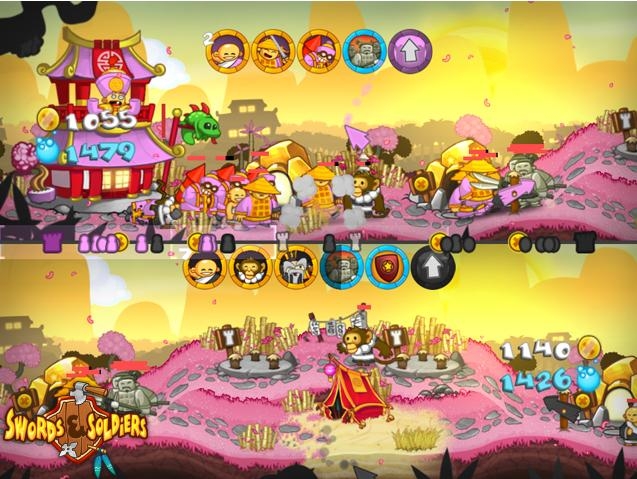 Finally, there’s also a skirmish mode that allows you to set up a quick game against the computer or a human opponent using split screen multiplayer. This mode is fully customizable, so you can select the map, the AI difficulty, the factions used, and so on. Unfortunately there’s no online multiplayer, just offline split screen. As you can probably tell from this description, there's quite a lot of content packed into this small downloadable game, with the lack of online multiplayer being the only major omission. As for replay value, you will probably get the most out of the game within just a few days, and the lack of depth is a likely sticking point as far as longevity goes, but there’s always the offline split screen multiplayer to come back to when you’re looking for something a little bit different to play with friends.

Swords & Soldiers is a rare thing – an RTS game that actually works well on a console. Indeed, having been built specifically with the limitations and opportunities that a console provides in mind, the developers have managed to create an enjoyable and unique RTS experience. It’s not the deepest RTS game on the market, far from it, and it’s unlikely to hold your attention for the long haul, nonetheless it functions superbly as a budget-priced downloadable game and is certainly worthy of your Nintendo Points.