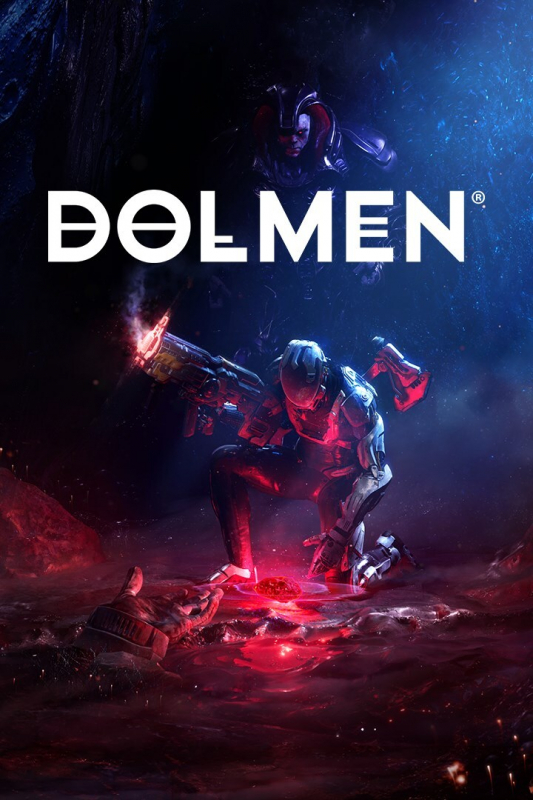 Highway to the danger Zoan.

Dolmen has its work cut out for it. Not only does it arrive on a scene increasingly populated with Souls-like games, but it launches less than three months after one of the greats of the sub-genre, Elden Ring. The first game from Brazilian studio Massive Work Studio, Dolmen, like the great majority of games in the Dark Souls mold, is an action-RPG with punishing combat and repeated player death. Where Dolmen attempts to set itself apart from the pack is in its dark sci-fi setting filled with Lovecraftian horrors, its projectile combat, and a focus on energy management.

Set on the alien world Revion Prime, Dolmen follows an agent of the Zoan Corporation hired to investigate a catastrophic incident. Miners on the planet had previously discovered powerful crystals called Dolmen, which, when activated, created dimensional rifts that allowed beings from other universes to enter. When the player-controlled agent lands on the surface of the planet, he finds only death, destruction, and scores of hostile beings — including enraged local fauna and inter-dimensional soldiers. 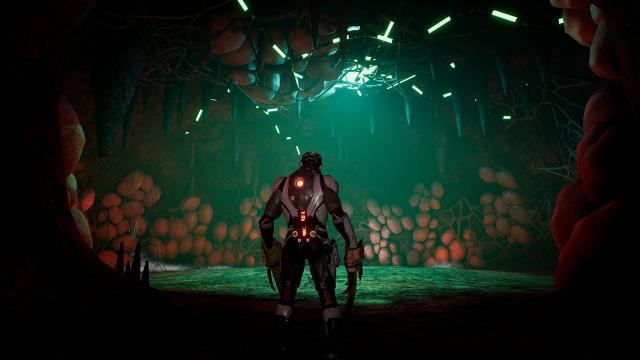 While a little clichéd, the premise of Dolmen is a solid foundation for an unnerving sci-fi horror game. Unfortunately, it never really goes anywhere interesting, and ultimately ends in an unsatisfying and anti-climactic way. The unexciting plot is aggravated by the game's story delivery, which combines environmental storytelling typical of the Souls-like sub-genre with exposition. You'll pick up environmental clues and glean background information from left-behind logs, but you'll also be told exactly what is going on from the tactical support person in your earpiece. Your comms will also be hijacked, at times, allowing you to speak with some of the higher-level bad guys. It's an unusual combination of indirect and direct storytelling that doesn't quite work, in part due to some information gaps and in part due to some unconvincing voice acting.

The moment-to-moment gameplay fares better. While Dolmen stumbles in storytelling, it delivers on the foundational parts of the Souls-like: dangerous environments, risky real-time combat encounters where reading enemy tells and managing stamina is key, and hard lessons learned through death. The game features some standard inputs and moves — light attack, heavy attack, dodge, parry, block, etc. — but also deploys some atypical mechanics. For starters, projectile combat is a larger piece of the puzzle in Dolmen than it is in other Souls-likes, excepting third-person shooting games like Remnant: From the Ashes. With a press of the L2 button, you can bring out your firearm and fire both light and heavy shots, which draw on your energy reserves. 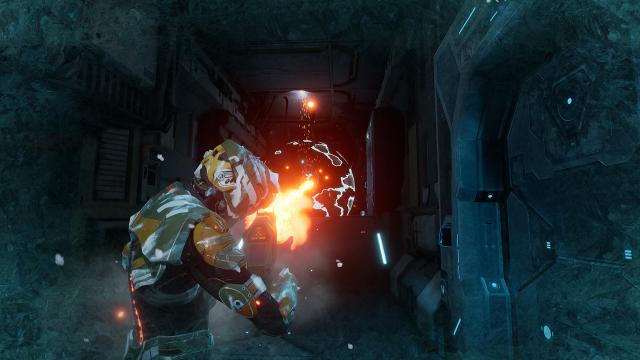 Energy is a huge part of Dolmen. Not only does it provide ammunition for your projectile weapons, but it powers "energy mode", a phase in which all melee attacks and movement draws on energy instead of stamina, and which provides unique elemental offensive and defensive capabilities. It's also used to heal. Energy used for "energy mode" and most projectile shots will recharge over time, but energy used to heal wounds will not. So, you need to manage your stores of temporary and permanent energy in order to survive each enemy encounter. Luckily, you come equipped with several batteries (think Estus Flasks) that recharge 50% energy. This deep focus on the multiple applications of energy helps Dolmen to stand out in a crowded marketplace.

If you deploy your energy wisely, you'll emerge victorious from many fights and find yourself with lots of nanites, crafting materials, and Dolmen fragments. Nanites are essentially experience points, used to upgrade your agent's strength, endurance, science, etc. You actually do all your leveling up on your ship orbiting Revion Prime, which is an interesting conceit. It would have been great to have had more to do on the ship — a space for trophies, a display for all crafted weapons, a combat simulation room, etc. — but it's a neat addition regardless. The ship is also where you'll craft new weapons and armor. Dolmen has an impressive collection of craftable items, all of which can be augmented with materials found around the planet below. If you want some of the rarer weapons, however, you'll need to defeat certain bosses more than once. That's where Dolmen fragments come into play. You use them to revive defeated bosses and/or recruit online players to help take them down. 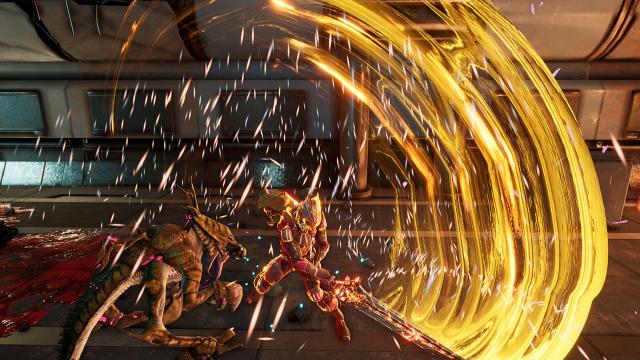 Bosses in Dolmen are fairly good, although nothing extraordinary. The best of the bunch is probably the third boss you face at the end of act one: Queen Caniptei. During this fight, you'll have to destroy several tendrils, then outrun growths that emerge from the ground, before finally facing down the behemoth queen, who strikes fast and hard.

While the bosses in Dolmen are decent, the paths leading to them are decidedly less so. Indeed, level design is perhaps the greatest weakness of this freshman effort from Massive Work Studio. The best Souls-likes have a reputation for ingenious level designs filled with intersections, short cuts, and secrets. While Dolmen's first area aspires to this design philosophy, subsequent areas drop the ambition altogether, and deliver mostly linear, empty hallways; dead ends; and uninteresting open outdoor areas. At times, Dolmen feels less like a Souls-like game and more like one of the generic corridor shooters from the seventh generation.

Those who see Dolmen through to the end will spend somewhere between 14 and 15 hours — short for a Souls-like, but plenty long for an AA action-RPG. Players could extend that playing time by respawning bosses and searching high and low for every material and secret. 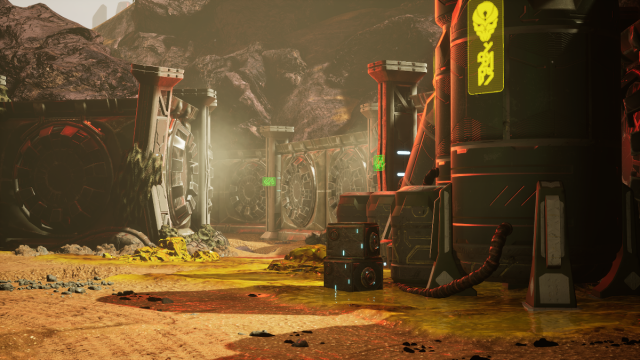 When it comes to graphics and art direction, Dolmen is a mixed bag. Built using Unreal Engine 4, the game looks sharp for the most part and performs reliably. It also features several unique biomes, which is helpful in avoiding any visual monotony. There's the opening mine area filled with spider webs and nests, a sandy outdoor area with hazardous mustard-yellow toxins, and an electrostatic river, to name a few. At the same time, though, there's a generic quality to all the environments; there's rarely anything unique or special here. It hurts also that over the course of 14 hours you'll see many of the same assets. Stumbling upon a mangled corpse the first time is unsettling; finding the 40th corpse is tedious.

Dolmen arrives at a time in the evolution of the Souls-like where innovation or originality or at least technical excellence is required to stand out. While Dolmen adds its own flavor to the proceedings with a focus on eldritch enemies, energy consumption, and projectile combat, it's not enough to distinguish itself. It can't compete with the brilliance of Elden Ring (no shame in that) but it also falls short of other AA sci-fi action-RPGs like The Surge and Hellpoint. Ultimately, it seems less like an offshoot of Dark Souls and more like a proof of concept launched before From Software birthed the sub-genre.

This review is based on a digital copy of Dolmen for the PS4, provided by the publisher.