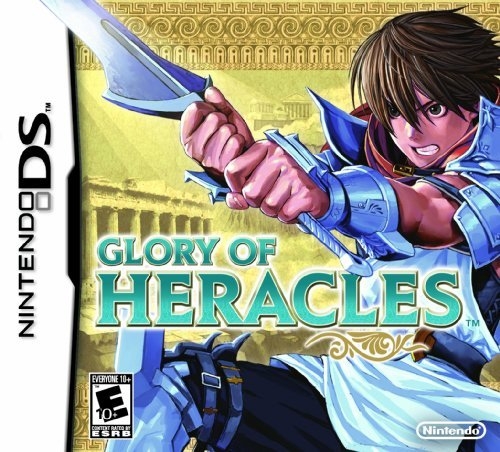 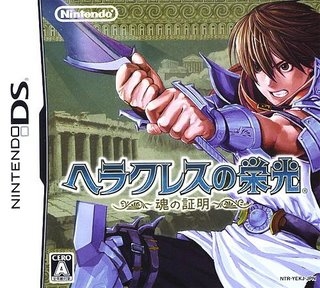 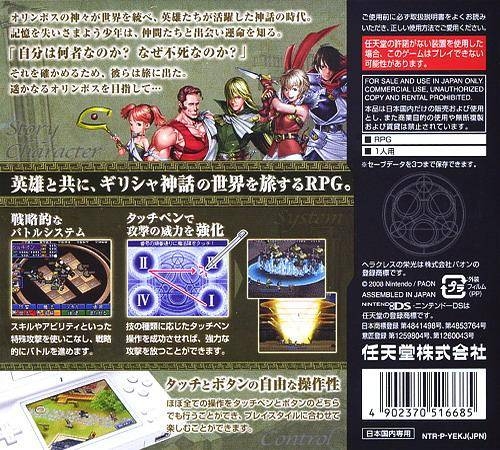 Glory may be too strong a word for this game.

Welcome to the world of Glory of Heracles, you are the titular Heracles, the son of the god Zeus and beautiful Alcmene; mighty, courageous and intelligent are the words that best describe you. You stand valiantly against the forces of darkness and are charged with spending your immortal life defending both the heavens above and the people below… well, maybe.

Glory of Heracles is the fifth game in the series that began its life way back on the Famicom in 1987, but only the first to see a release outside of Japan. It opens with the hero, who may or may not be the legendary Heracles, an immortal who runs into (quite literally) Leucos, a young girl who insists she’s a boy and is also immortal. Both have lost their memories and decide to travel to Mount Olympus to discover why they are immortal and why they can’t seem to remember their pasts. Along the way they will meet up with other immortals who have also lost their memories, and some that even claim to be Heracles himself, all on their quest for answers.

While the story is unique in both its setting and characters, it does suffer from terrible pacing, brought upon by the snail's pace that the game really gets into the action, the slow character development and the repetition of going from town to field to town to field again. What it really all boils down to is that you never feel connected to the game world, never involved with the characters plights, which, for a large scale RPG like this is a real deal breaker.

The game is split into two distinct gameplay styles: the overworld and the battlefield. While navigating the overworld you will explore new environments, meet people, go into towns, buy weapons and armour, and rest at inns before moving onto the next town. Along the way you will encounter random enemies. Yes, that’s right, random battles, something which I thought was done away with at the turn of the millennium is back in full force here, by which I mean every few steps. Once you enter the battlefield you must assign actions for each of your party members, all the while navigating a cluttered menu system that is very confusing to use properly, with many sub-menus and options. Between the random enemy encounters and the boring monotonous gameplay, it’s clear that Glory of Heracles is a game whose design is trapped somewhere in the mid 90s. That being said, it’s a design that still works, and old-school RPG fans will get a kick out of, it just seems that the developers decided to forget a decade of innovation in the genre and make a game that feels like it would be at home on the Super Nintendo and not the DS.

Glory of Heracles offers two controls schemes that you can switch between at any time. The first is the ‘classic’ style, where you move the character using the D-Pad and interact with menus using the face buttons on the DS. The second is the ‘touch’ control scheme, which replaces the button inputs with touch commands. You move your character by pointing in the direction you wish for them to go (similar to the ‘Zelda’ games on the DS) and navigate menus via the stylus. In battles you can also choose to power up your magic attacks by starting a quick ‘mini-game’, complete the challenge and your magic will be much more effective. These mini-games are only touch based, so keep that stylus close by. When choosing between control styles, I recommend the touch controls, not only do you get the option to power up your spells but you can navigate the game's cumbersome menu system much more effectively.

The environments in the game are, for the most part, large and detailed. It’s clear that the developers gave a lot of attention to detailing the environments and made them feel ‘realistic’ - part of a living, breathing game world. Unfortunately, it’s also painfully obvious that many elements were re-used. Towns look the same, as do the interiors of buildings and temples, and you will sometimes get deja-vu travelling through, supposedly, vastly different regions. The graphics themselves are solid, with nice looking 3D models that surprisingly animate very well on the portable, for example knocking an enemy over will have them flailing all over the place in a fluid manner that is not often seen on the Nintendo DS system.

From an audio point of view Glory of Heracles is rather unremarkable, the tracks all seem ‘generic’ for the genre and setting, and nothing really stands out. The exact same thing can be said of the sound effects. It’s all been heard before - swords sound like swords, coins like coins and wood like wood, it’s just been done to death and so you end up with a game that simply doesn’t stand out. One thing that does make itself known is the terrible dialogue. Why is it terrible? Puns, so many puns… what starts off as ‘cute’ cracks at Ancient Greece and its mythology quickly gets old and is simply not funny, kind of like that awkward aunt we all have that makes really lame jokes and makes you feel obliged to giggle. Yep, those jokes.

Like most RPGs on the DS, Glory of Heracles is a rather lengthy adventure, with a main quest lasting upwards of 25 hours. Add to this some side quests and you get a nice long romp through Ancient Greece. However, it’s obvious that the random battles, which appear quite frequently, are used to pad the games length and keep you going longer. The game is also quit easy - never will you feel short on items or that your characters aren’t a high enough level. The game will even offer to save your progress before boss battles or particularly difficult situations. Once you have completed the game you can come back for a few extras designed to keep you playing long after you answered the call of your party’s quest.

I want to make one thing clear: Glory of Heracles is not a bad game by any stretch. It’s a solid RPG, with a decent story that will last you a good while. What holds it back from reaching the heights of the classics that it shares a system with are archaic design choices, terrible pacing of the story and a 'hit and miss' record on presentational aspects. However, if you're looking to re-live the classic days of the RPG, and don’t mind a little grind along the way, by all means look into Glory of Heracles. But if you’re like me and have moved on to greener pastures, there are simply too many better games in the genre on the DS to ignore.