There's a lot to love and a lot to regret about this split personality shooter.

For all its good parts, 2014's Wolfenstein: The New Order suffered from a serious identity crisis. Half of the game embraced the fast-paced over-the-top bloodbaths of old-school shooters like Doom and Quake, and half attempted to tell a sober, subversive story about war and violence. Instead of ironing out that incongruity in the game's sequel, developer MachineGames has exaggerated the tug of war between social satire and butchery. As a result, Wolfenstein II: The New Colossus is even more jarring in tone and confused in content than its predecessor, especially in its front half. Things improve sharply in the final few chapters, but it's a case of too little, too late.

The New Colossus takes place in an alternate reality 1961 where Germany won WWII. It picks up immediately after the credits roll in The New Order. Series hero William "B.J." Blazkowicz, mortally wounded after an assault on a Nazi stronghold, is rescued by his ragtag group of freedom fighters. B.J. returns to Eva's Hammer, a commandeered U-Boat, where he slips into a coma for a few months. Once awake he joins what's left of the European resistance movement in an attempt to liberate America, which has fallen under Nazi control. 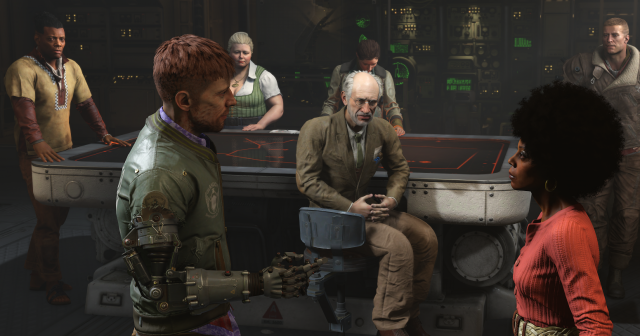 As it did in its first stab at the franchise, MachineGames cannot make up its mind about Wolfenstein II, from either a narrative or gameplay point of view. Thematically, it's a mess. The game opens with B.J. dreaming about his father's savagery and racism, then segues into a ludicrous chapter in which our hero mows down Nazis from a wheelchair. Later, via in-game narration, B.J. ruminates about his impending death, then fights giant fire-breathing mechanical dogs. The story directors at MachineGames can't even maintain a consistent tone within an individual cut scene, evidenced by a somber moment between lovers interrupted by a bathroom joke.

The New Colossus veers so bumpily from self-seriousness satire to B-movie schlock and back again that it's unclear exactly how it wants its audience to react. Take, for example, the ending of chapter four. B.J. has just delivered a nuke to the secret Nazi base in Area 52, in Roswell, New Mexico. He steals a monocycle and escapes down a highway as triumphant music swells. All right, you think; now the game is ready to find its stride, its pace, its tone. Nope. The New Colossus stops dead in its tracks to return to B.J.'s childhood farm, so he can deal with his daddy issues. 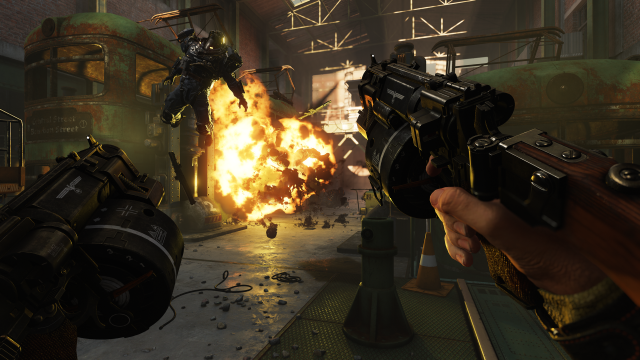 It's particularly frustrating because the characters that fill all these story moments are interesting, and the voice actors who bring them to life are extraordinary.  Brian Bloom, who lends his voice to B.J. (and who also voiced Nick Reyes in last year's Call of Duty: Infinite Warfare) is terrific, as are Michelle Forbes and Glenn Morshower, who play B.J.'s mother and father, respectively. The stand-out, though, is Mark Ivanir as Set Roth, the Jewish scientist simultaneously absorbed in and frustrated by his work.

The tonal weirdness in this newest Wolfenstein adventure starts to dissipate around the game's halfway point. Suddenly it becomes more funny, more loopy, and much more preposterous. It embraces the absurdity of its subject material and the hyper-violence of its gameplay and decides to have fun with it. The best and most uproarious scenes occur in the game's back half, including a moment in the final act that is so jaw-droppingly outrageous and hilarious that it needs to be seen to be believed. 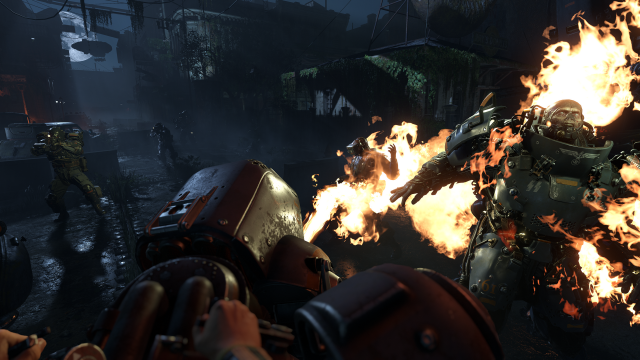 This halfway point also marks the point where The New Colossus becomes a lot more fun to play. For its first five or six hours, this first-person shooter stumbles around mostly linear levels, attempting to placate fans of spray-and-pay and of stealth, and satisfying neither. Stealth is never really a viable alternative. Firstly, it slows the game down to a crawl. Secondly, Nazi sentries are almost supernaturally aware of your presence. Thirdly, there are no on-screen meters, notifications, or visual or auditory clues indicating enemy awareness. Lastly, there's no way to re-enter stealth or escape pursuit once an alarm has been tripped. It all feels like a half-basked concession in a game that makes much more sense as a forward-momentum, weapons-free shooter like 2016's Doom reboot.

Levels begin to open up in the game's latter half. Linear corridors and claustrophobic sewers expand into crumbling cities and space bound fortresses. Stealth takes a backseat, although it's made more feasible with one of three contraptions offered to B.J. after a midway plot twist. These contraptions change completely the flavor and tenor of gameplay in The New Colossus, allowing players to accentuate their skill sets.

These skills are further reinforced with perks, which grant bonuses based on play style. Kill ten enemies while dual-wielding weapons and you'll earn a 20 percent boost to ammo capacity. Collect ten enigma codes from dead commanders, and commander alarm signals are jammed, delaying them. It's a brilliant way to reward a player for playing the game his or her way, but, again, not every way is as practical or enjoyable as others.

Another feature that pops up in the second half of the game is the Enigma machine. Using codes dropped by dead commanders, players can play a mini-game to uncover the locations of Uberkommandants throughout the United States. From a map on the bridge of Eva's Hammer, B.J. will deploy to one of these locations to take on optional side missions. Eva's Hammer also features dozens of NPCs, many of whom hide side quests of their own, plus a shooting range, a console where players can replay levels for high scores, and even an old-school arcade cabinet with a playable version of Wolfenstein 3D — with a twist. 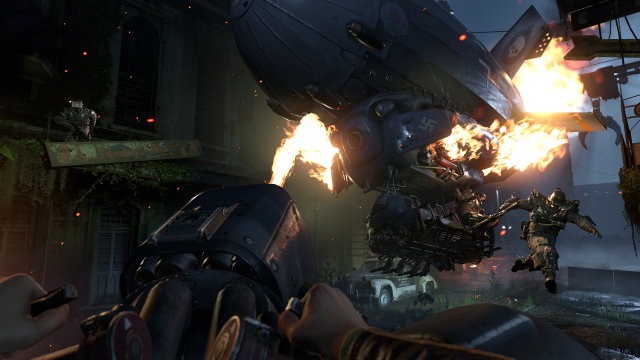 Technically, The New Colossus runs well and looks great — at least on PS4. Powered by id Tech 6 and made all the more attractive by MachineGame's industrial, metallic art direction, the game captures successfully an American landscape gone horribly wrong. B.J.'s large assortment of weapons looks similarly impressive, and sounds stellar too. The throaty roar of the tri-barrelled shotgun is exceptionally good. In addition, the game's developers have added tiny details, in Nazi propaganda and in hidden collectibles, that bring the alternate reality to life.

There's a lot to love in The New Colossus: high production values; a system that reinforces and rewards player choice; and an abundance of optional content, in the form of side quests, replayable levels, and easter eggs. But there's also a lot to regret, namely a slow, unsatisfying, and tonally-inconsistent first half; and unsatisfying stealth gameplay throughout. Only in its final chapters does the game finally find its purpose, its voice, and its tone. Here's hoping Wolfenstein III (you better believe it's coming) will figure out what it wants and needs to be from the very beginning.

This review is based on a retail copy of Wolfenstein II: The New Colossus for the PS4