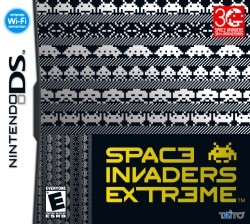 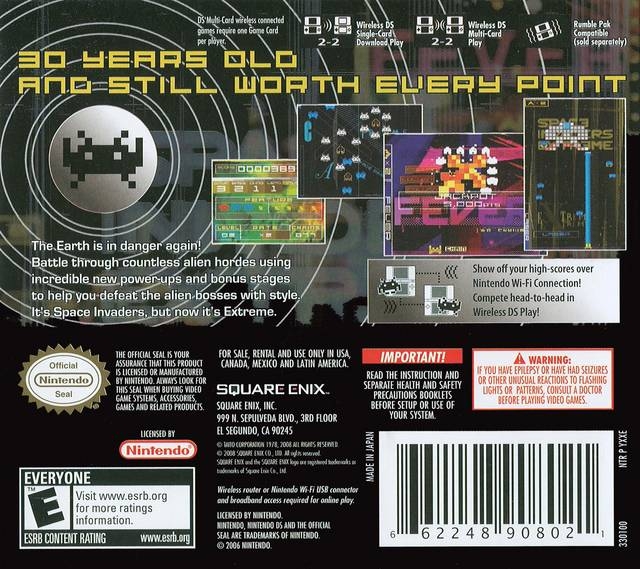 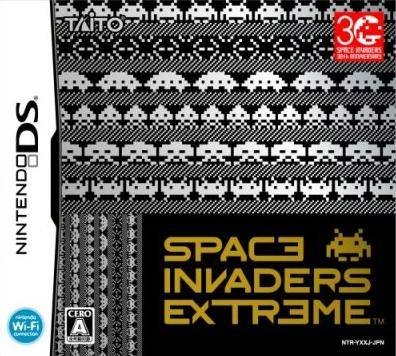 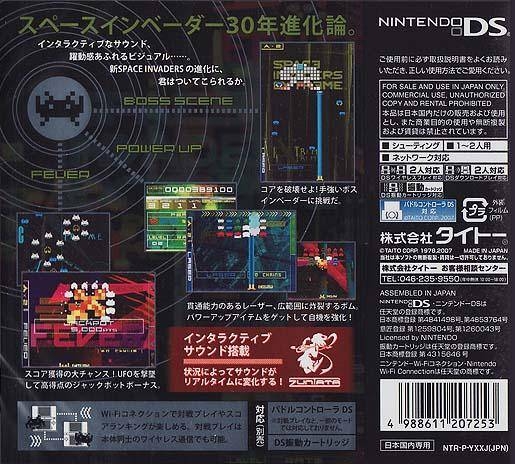 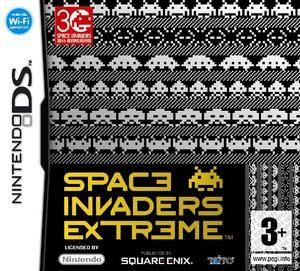 The war has taken its toll, but will the aliens ever give up? No, never.

Space Invaders Extreme, as the name would suggest, is a remake for the current generation of handhelds of one of the most iconic games ever made. The basic gameplay remains the same. You control a small spaceship at the bottom of the screen and shoot at the pixelated alien spaceships which are scrolling down the screen towards you, all the while avoiding their weapons' fire. A lot of other elements have changed though: there’s a much more intense sense of speed to the game, compounded by incredibly active and vibrant visuals and a superb soundtrack. 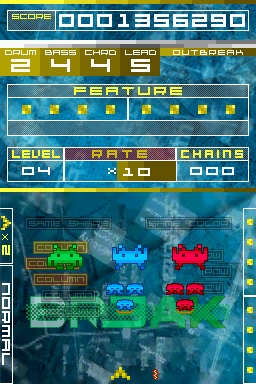 In Space Invaders Extreme there are different types of alien invaders, all of which are easily distinguished by their colour, size and special add-ons like shields or bombs. Most alien formations largely consist of your normal alien ships which fire simple shots and take only one hit to destroy, but other types of ships are quickly introduced. Some have barriers which take several shots to destroy and will commonly lead the formation, others have shields which reflect your fire back towards you, and some even have bombs and will dive towards the bottom of the screen in an attempt to quickly destroy you.

As well as your ordinary one-shot cannon you can also collect power-ups to access new weapon types. If you destroy four enemies of the same colour you automatically obtain a power-up for a brief period of time. The precise power-up you receive varies depending on the colour of the ships you destroyed. For example, kill four red enemies and you receive a cluster bomb attack, kill four green enemies and you receive a spread gun, but my personal favourite is the blue laser gun that incinerates everything in its path.

If you manage to trigger the power-up system twice in a row you’re then given the opportunity to shoot at a UFO which will fly across the top of the screen. If you manage to hit the UFO you’re immediately taken to complete a short mini-game, which will typically challenge you to shoot a certain amount of enemies within a specific amount of time. If you complete the challenge you then enter a ‘Fever Mode’, which essentially gives you a super-powered cannon and the opportunity to rack up loads of extra points. 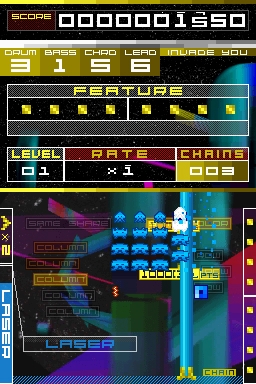 In total there are five key stages to the main arcade mode, and at the end of each stage there’s a boss battle which will span both screens of the DS. The bosses consist of giant space invaders which can take a lot more damage than ordinary enemies and have special attacks. Boss battles usually require more trial and error than the main game, as you often have to work out how to destroy the bosses and what pattern of movement and firing to adopt. The boss battles are nice breaks from the hectic core gameplay, often challenging you in new and inventive ways.

Space Invaders Extreme is an incredibly exciting, enjoyable and intense experience. You’ll find yourself sweatily gripping the DS tightly with nervous excitement as you approach the end of a level, and you’ll often want to throw the thing against the wall in anger when you repeatedly die. The challenge the game provides lives up to the ‘Extreme’ tag, and the later stages can be infuriatingly difficult - as you would hope and expect from a classic arcade shooter like this. The game is extremely addictive; it certainly has the ‘one last try’ feel, and the speed of the game and brilliant graphics and music really supplement that feeling.

As far as the visuals go, the game retains the iconic pixelated ship designs of the original, but compliments them by introducing a vibrant colour scheme and almost psychedelic background visuals that look like retro techno videos. It might sound a little weird, but in action it all works perfectly. Outside of the boss battles (which take up both screens), the bottom screen covers all of the action, while the top screen and side-bars contain important information. The left side of the bottom screen shows how many lives you have left and how much longer you power-up will last. The right side of the bottom screen shows how much progress you’ve made towards getting another power-up. The top screen contains all of your scoring and combo details, and also includes information about the game’s music. 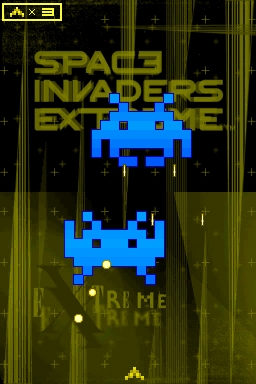 I’ve covered the visuals and the gameplay, but I still haven’t talked about my favourite part of the game which is the music and sound effects. In games the music will often be pleasant background noise. Sometimes it’s elevated to compliment the gameplay, but outside of the music/rhythm genre it’s not often that the music is integral to the gameplay experience or actually a core part of the gameplay itself. But this is where Space Invaders Extreme truly excels for me. The music consists of a thumping techno soundtrack, not a genre of music I have any particular liking for, as my last.fm profile can testify. But in some games it just fits (WipEout is perhaps the most famous example), and this is certainly the case for Space Invaders Extreme.

If you have the soundtrack blasting through your earphones the game suddenly becomes much more intense and involving. There’s a much greater sense of urgency and you’ll soon be firing your weapons so that they mirror the beat of the music, not just because the rhythm of the soundtrack perfectly matches the action, but also because the sound effects add to the actual music – you help to create the music by firing your ship’s weapons. The gun still makes that retro ‘pow, pow’ sound when fired, but it also now strikes a note that adds to the music with every shot you take. The music throughout the game is excellent, not least the menu track which is superb. 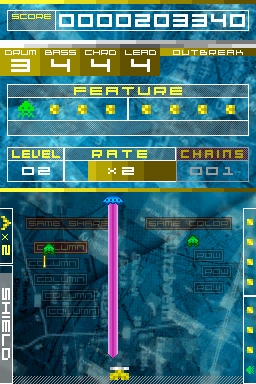 If the game has one weakness it’s the lack of content. It was sold from launch at a budget price and that was certainly a wise choice, if only to prevent the customer feeling short changed. Somewhat deceptively there are several game modes, although there’s very little difference between most of them. First of all there’s the main Arcade Mode, which consists of five separate levels for you to battle through. They’ll only take a few hours to complete, assuming you can complete them. The first couple of levels are relatively simple once you’ve learnt the basics but by level three and four the difficulty will have halted the progress of an average gamer, with level five pretty much being the reserve of experienced gamers.

On top of the Arcade Mode there are two bonus single player modes – Stage Mode and Ranking Mode. Stage Mode doesn’t really add much and basically allows you to access any of the levels and their variants that you’ve managed to unlock in the Arcade Mode, without having to fight through the entire campaign from the start. Meanwhile Ranking Mode challenges you to gain as many points as you can in the main game and allows you to post your scores on worldwide leaderboards. High score hunters will probably find some added value here, but for everyone else it adds little or nothing to the game’s lasting appeal. 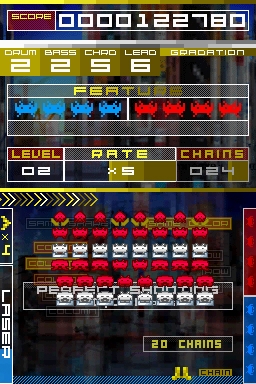 The final mode is a multiplayer mode. The game allows for both local multiplayer via a single cartridge and online multiplayer via Nintendo Wi-Fi. The multiplayer game is a survival set-up where you’re both challenged to see who can last the longest against an army of enemy ships, and also allows for unique power-ups that can be used to hinder the other player’s progress. So if you use your DS for multiplayer quite often then Space Invaders certainly has some lasting appeal despite the short single player game, but if you’re here for the single player experience only then you can easily take a couple of points off the value score.

Space Invaders Extreme is a fresh update on the classic. It retains the core gameplay and addictive qualities of the original, while at the same time introducing new gameplay elements that keep the game fresh and varied. The presentation is excellent, from the fitting music and superb sound and music effects that make the game even more addictive and involving, to the psychedelic backgrounds and splashes of vibrant colour. It’s an incredibly short game, so keep that in mind when considering a purchase. Unless you intend to go all out for a high score in Ranking Mode, or play multiplayer regularly with friends, then you will probably find that Space Invaders Extreme lacks longevity. Don’t let that put you off too much though; it’s a budget title that offers a few hours of truly superb gaming and it comes highly recommended.