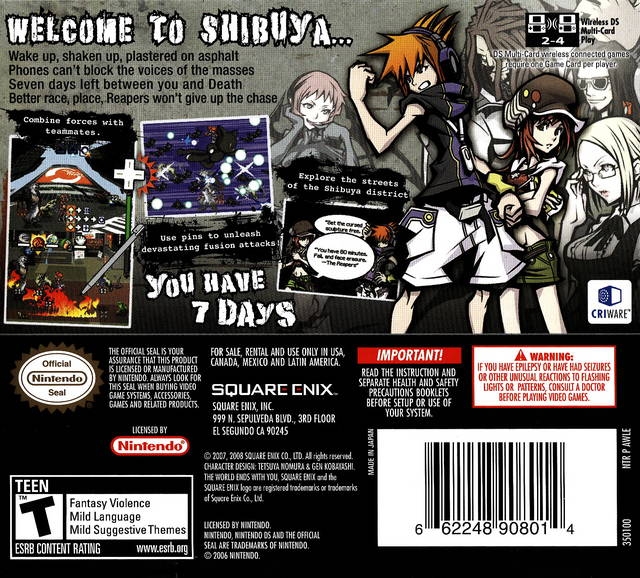 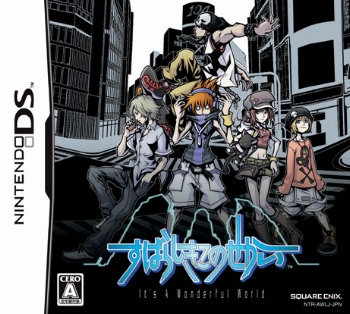 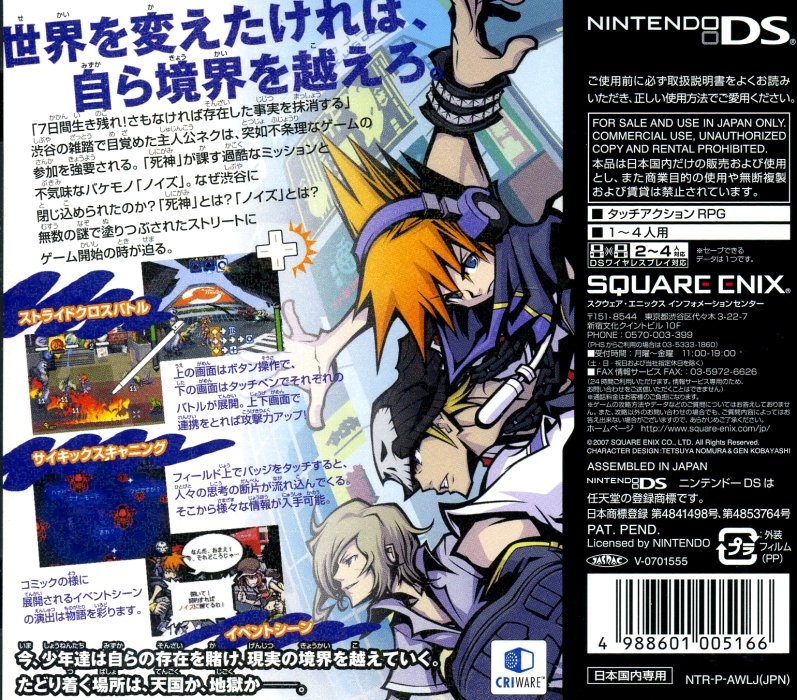 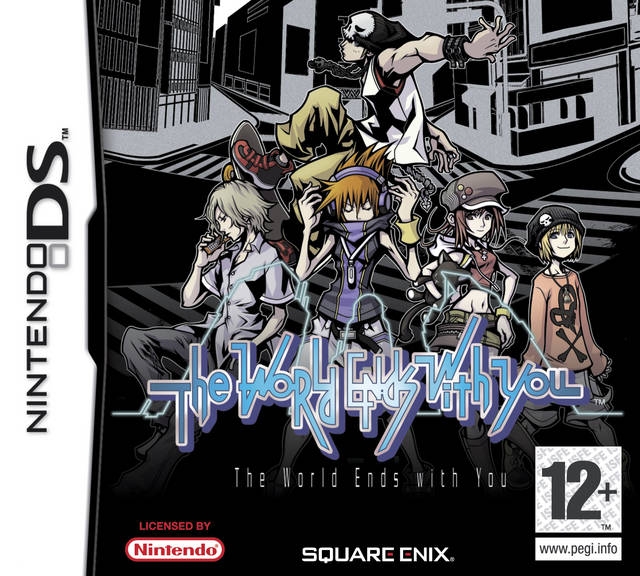 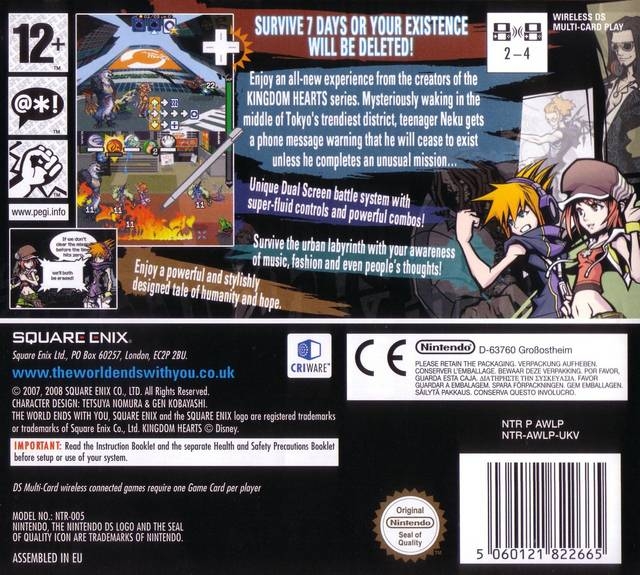 It's a Wonderful World

The World Ends With You (DS)

Review: The World Ends With You (DS)

It's rare that a game tries so many new things and succeeds at them all. The World Ends With You is one of those few games that really stands out from a crowd, and offers a unique and most importantl

The Japanese Role Playing Game, or JRPG for short, is a genre often criticized for rehashed characters, plots, themes, and gameplay mechanics. This isn't really true, but the perception exists because the larger and more popular JRPG developers rarely take any chances, and the small developers who do are often ignored. Square Enix, however, is definitely trying to break the trend.

The World Ends With You was developed by the Kingdom Hearts team and Jupiter (the studio behind Kingdom Hearts: Chain of Memories). It follows a boy named Neku, who's thrown into a deadly trial of life and death called the Reaper's Game. He meets a girl named Shiki and the two of them have to fight monsters known as Noise through daily missions for 7 days or cease to exist. You'll also have 2 other partners at points in the game -- a blond kid named Joshua and a skater punk named Beat. That's as much as I'm willing to tell you about the plot, but the game is full of twists and turns and a completely crazy ending. The story can be surprisingly deep, and touches on subjects of friendship, trust, morality, individuality, and even existence and the meaning of life.

The characters themselves are pretty interesting. I'm not going to promise you will like all of them, but they are all very well developed and show clear conflict and change as you progress through the game. Neku starts out in a tired RPG cliché of amnesia and teenage angst, but for once, this isn't a bad thing. Neku's early attitudes were necessary to convey the message of the game and matched the style relatively well. He develops quickly, and it won't be hard to empathize with him by the time you are through the first third of the game. The other characters he meets along the way are unique and interesting with their own motives and conflicts. Again, I'm not willing to say much about the characters in order to avoid spoilers, but they have a great dynamic and interact well.

There is far too much involved in the gameplay to describe it all in this review, but I'll try to get through the major gameplay elements. Combat takes place on both screens of the DS. There are no random battles. You choose when and how much you want to fight, other than boss fights. You can change the difficulty level at any time, as well as reduce your characters all the way down to level one if you choose. You can also chain up to 4 fights in a row to fight them one after another without a break. The benefit of this is that rare pin drops become more common the more you handicap yourself. You control Neku in the bottom screen with the stylus, and his partner in the top screen with the D-Pad, or the buttons on the right if you are left handed. Neku moves by touching him with the stylus and dragging slowly accross the bottom screen. He can dash (which also dodges enemy attacks) by touching him and quickly dragging the stylus to the other side of the screen. Neku's partner can't move at all, and dodges by jumping in the air above enemy attacks with Up on the D-Pad.

All of Neku's attacks are determined by pins that you can equip. Each pin has its own ability, levels up with experience, and for some evolves to stronger or different functioning pins when used in combat enough. Pins also have brands, which effect their power in the different districts of Shibuya. The most popular brands get an attack bonus and the least popular get a penalty. Using certain brands often in one district will change the popularity of that brand. All attack pins are activated through touch screen controls. Some examples of these are slashing the enemy, touching the enemy, tapping the screen, or drawing circles. There are 304 pins in the game, many of which are just the same effect with a different brand, but there are at least 50 completely different attack pins, which allows for amazing customization and personalized combos. Most of the time these work very well. The one problem is that some pins with similar activation commands are hard to separate. Fortunately the developers understood this problem, and you can set some of your pins to only activate when holding the L button.

Neku's partner navigates a combo tree with the D-Pad buttons. Pressing Up will launch you into the air and pressing right or left determines the direction of your attack. The combo tree is different with every attack, so you do actually have to pay attention to what's going on in the top screen. At the end of each branch of the tree is a symbol. Aligning the correct symbols gives you special combined attacks that you can unleash on you foes. If this sounds like it's hectic, difficult, and a lot to keep track of, that's because it is. Using both Neku and his partner is very difficult, but it's also incredibly fun and rewarding. You can have the CPU take over the top screen character for you, but it does take some of the fun out of the game.

There are also numerous interesting out-of-combat gameplay features. The world is mostly open. Most of the time you can go wherever you want in Shibuya. Within the city you'll find shops that sell food, clothes, music, pins, character power-ups, and swag, as well as places you can go to engage in the Tin Pin Slammer minigame. Food can be eaten by both you and your partner to increase your stats. You have to actually digest the food by fighting, and you can only eat a certain amount per day. Clothes increase stats as well, but also have brands and secret abilities which can only be unlocked by befriending shop owners. The entire game's soundtrack is available for purchase from the music stores around Shibuya, and any of the songs can be listened to from the menu or set as the menu theme. Swag is mostly just useless collectibles, but they are fun for people who like to gather extras like this.

Tin Pin Slammer is a 2-4 player game where you use your pins to slam enemy pins off a board. Each Pin has its own Tin Pin Slammer stats in addition to its combat stats. It's kind of like Marbles but with stats and powers. It's a fun distraction and a decent multiplayer mode. You can also set up your own personal wireless shop where people can buy whatever pins, clothes, food, and swag you choose to sell through mingle mode. If you're bored you can actually read the thoughts of the citizens of Shibuya and see what people are interested in and what's going on in their lives.

Even if you don't have friends around to buy from your shop the CPU will sometimes randomly purchase some of your items. Mingle mode also gives your pins experience anytime you encounter someone else who has a DS transmitting a wireless signal. If the person you encounter also has The World Ends With You you'll exchange player cards and information and can shop at each other's stores. Unfortunately neither of these features is online enabled, but they are fun nonetheless. Another interesting feature of the game is that your pins actually level up while it's turned off. Your pins gain experience for all the time that your game is turned off up to 7 days.

If you haven't figured it out by now, The World Ends With You has its own unique and interesting style and approach. This definitely caries over to the graphics and art. The World Ends With You is completely 2D, and the lines and colors are often dark, thick, and exaggerated. Buildings are in strange angles and the character designs are all stylized and over-the-top. This is all in line with the game's style. There is a manga and anime feel to it, and it works great. From a technical standpoint there is nothing impressive here, but there are also no real graphical faults either. The game runs at a rock solid 60 frames per second, and the animations are fluid and natural. It is occasionally hard to see what's going on because of how much is on screen, but this is a rare issue. Overall the game has a unique and amazing visual style.

Never breaking style, the game's soundtrack is also a perfect match, all techno and j-pop. The soundtrack is extensive and beautifully translated and performed by English artists. Whether you like techno and j-pop or not, it's exactly what the game needed, and there honestly is no other music that would have fit the game better. The music is all written specifically for this game, and is an excellent example of its genre. It can get a bit repetitive, but they do change up the combat music for every new major story section and boss fight. There is some voice acting, but most of it is in combat. Most of the dialog is delivered through text bubbles. Some may complain about this, but I believe this is mostly done to keep the game in a manga style. That said, the voice acting that's there is very good, and I can't help but wish there was more of it.

The World Ends With You isn't a particularly long game. It clocks in at about 15 hours if you don't screw around any. If you do stop and check things out some, it will probably run you more like 20-25 hours for the first run through the game. After you beat the game you can go back and play each chapter individually and get more plot information through secret reports, as well as collect new pins, music, clothes, and swag. Trying to get 100% completion in this game can take well over 100 hours, and although they aren't online, the community and multiplayer features do go a long way towards extending the life of the game. When all is said and done it's an excellent value, far exceeding most $60 games.

It's rare that a game tries so many new things and succeeds at them all. The World Ends With You is one of those few games that really stands out from a crowd, and offers a unique and most importantly very fun experience. The game has a crazy style, good plot and character development, an incredibly addictive combat system, and far more features than most console RPGs. Even if you only buy it to play through the main story, you will certainly get your money's worth. The gameplay is fun enough that it's easy to pick up and play even after beating it just to have fun with new combos. In the end, I think originality and fun gameplay mechanics should be rewarded, and the bottom line is that this game has a lot of both. Experiences this fun and rewarding are few and far between, and I highly recommend The World Ends With You to RPG and action fans alike.