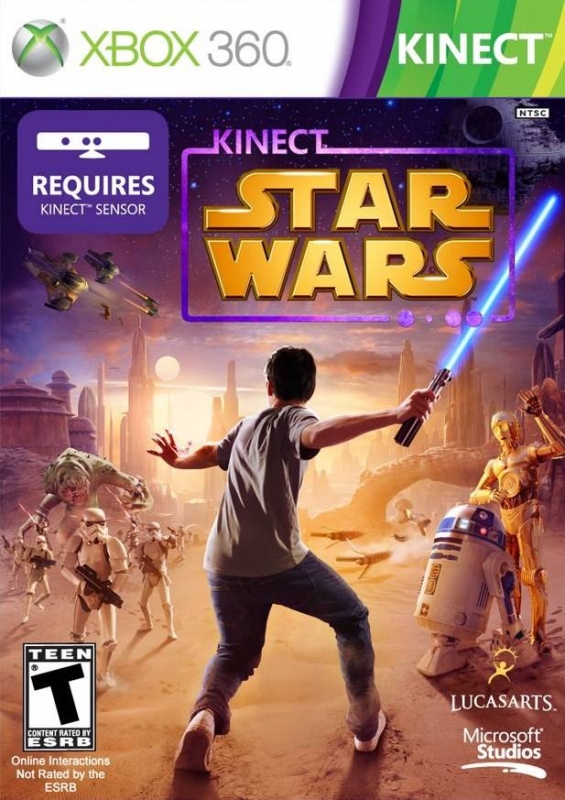 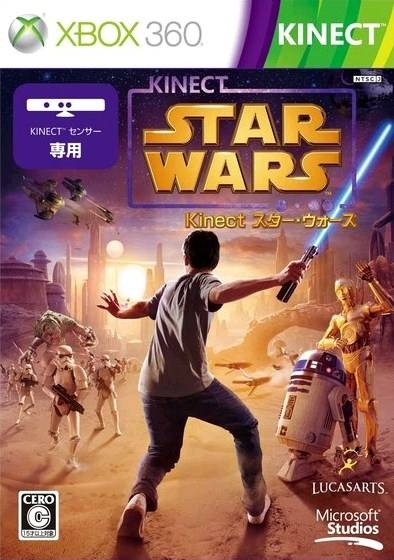 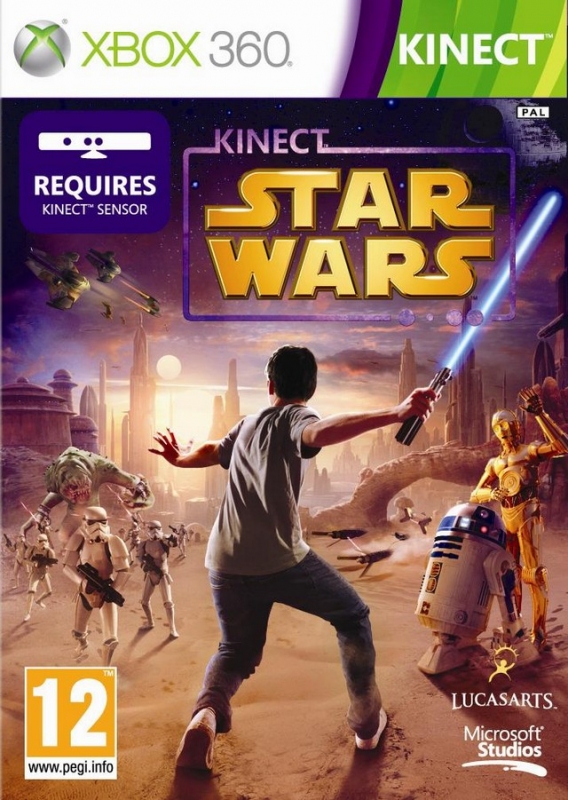 Since the inception of Star Wars, fans have pined for the chance to feel like they're wielding a lightsaber in real combat, using their skills with the powerful blade to cut down waves of enemies and duel powerful foes. Finally, after 35 years... we get to keep waiting. Kinect Star Wars will not give you the power of a Jedi Master, or even the lowly Padawan you play throughout the main campaign. Instead, you're left with a frustrating campaign topped with the garnish of a competent dance sim and a fun pod racer.

There are five main game modes in Kinect Star Wars: Jedi Destiny, Rancor Rampage, Duels of Fate, Podracing, and Galactic Dance-Off. The first is the one you've seen heavily advertised, and it's what purports to give you the feel of really controlling a Jedi Knight. Sadly, it's easily the least effective of the bunch. Jedi Destiny follows a terribly nonsensical but thankfully short story following two young Padawans shortly after the events of Phantom Menace, fighting against trandoshans and battle droids manipulated by the Sith.

Throughout the campaign you'll manipulate your Padawan through a few different gameplay styles with Kinect. The majority of the game takes place in a third person perspective, which is where you (theoretically) slash with accurate lightsaber controls, attack with force powers, and battle enemies on foot. In practice, very little works as advertised. Movement is handled by taking a leaning step forward to dash, jumping to jump, and side-stepping to move to one side. This of course doesn't give you control over your direction, as the game takes place on-rails. Most of this works well outside of combat, but in the heat of battle the game is easily confused by your movements, and you'll be frustrated with it more often than not when you try to jump or dash and it simply doesn't respond. Speaking of combat, the problems pile up pretty fast here. The lightsaber is inconsistent at best, and even when it does do what you tell it, it mimics your motions on only the most shallow of levels. When fighting enemies who block it's completely unclear where you can cut them, and because of the aforementioned movement issues, trying to sidestep or jump behind them doesn't always work. Force powers fare better, with the player pulling their hand back kamehameha style and pushing forward to charge and release a force push, and holding their hand out to grab and toss enemies and objects. Unfortunately these can't be used on stronger enemies, and you'll be forced into the awful saber controls through most of the game. A few special maneuvers like a jump and slash and dash and slash can do more damage, but again this is hampered by serious control problems.

These on-foot segments are broken up with duels with "bosses" at the end of each level. These duels, however, aren't epic lightsaber clashes. They are simply a two-phase event where you block your opponent's attacks by watching their blows, then counter-attack after filling up a block meter. The mode works most of the time, but the game frequently misses your block locations and for some reason even has trouble during the attack phase. There is also no variation between bosses other than the speed of their attacks, so in spite of the rarity of these encounters, they're already tiresome by the end of the game.

Outside of the third-person combat segments, Jedi Destiny features speeder bike and starship segments. The speeder bike controls by leaning, and slows and speeds up when you push forward or pull back. A blaster on the end of the speeder fires automatically when enemies are in sight. These segments control well, and, despite their simplicity, are among the most fun parts of Jedi Destiny. The starships control almost the same, with the exception of allowing your ship to move up and down as well as left to right. These parts of the game are really the only places in Jedi Destiny where I felt Kinect and the game were accurately responding to my movements. All of Jedi Destiny is technically playable in co-op, but "playable" isn't really an accurate term. All of the problems present in the singleplayer are present in co-op, but they pop up far more often. The saber controls went crazy regularly, and duels were almost impossible. In fact, somehow, the game even managed to flip me and my friend around while playing mid-game, even though we hadn't moved from our spots and were an ample distance apart. This friend was also a foot shorter than me, quite a bit skinnier, and female, so I don't see how Kinect and the game could possibly confuse us. I don't recommend ever playing the game in co-op, as the frustration is far more common than actual effective control.

Thankfully there is more to Kinect Star Wars than advertised, and the other game modes generally fare much better. Duels of Fate is sadly just the boss fight minigame from Jedi Destiny, and it's no more fun here. Rancor Rampage gives you control of a rancor to stomp around and destroy an area. It controls similarly to Jedi Destiny in that you move with your whole body, but you have to walk in place to move the rancor forward and make slightly more complex gestures to wreak destruction. It seems to control better than Jedi Destiny, but problems will still pop up regularly.

The real stars of the show are Galactic Dance-Off and Podracing. Galactic Dance-Off is basically a Dance Central clone with a handful of cheesy Star Wars-themed remakes of pop songs. It's stupid fun, and good for some laughs. It also controls fairly well, and will keep fans of dancing games coming back. Podracing, however, is a surprisingly complex experience, giving players a great degree of control over their podracer. Each hand controls one of the pod's throttles, and you can steer the pod with surprisingly impressive accuracy and precision. Players will also need to jump the pod over obstacles, knock pests off, repair when damaged, boost, break, and force other racers off the road while dodging their strikes. All of this actually works very well, and it makes me wish there were more courses and the game put more focus on the mode. It's even playable in splitscreen, which is quite fun. Graphically, Kinect Star Wars is among the ugliest major titles on the Xbox 360. Most of it could easily be mistaken for a PS2 game, and there's no variety in the (blocky) enemy models. The animations and effects are nothing impressive, and the environments are cookie-cutter and dull. There are also an incredibly large amount of lengthy cutscenes, which gets irritating. Voice acting is good, for what little it's worth to the terrible story. The music, being taken from Star Wars, is of course awesome.

How much value you get out of Kinect Star Wars really depends on the reason you bought it and what you intend to play in it. If you're buying it for Jedi Destiny, that campaign only lasts a few hours, and really that's already too long. If you are going to play Rancor Rampage, Podracing, and Galactic Dance-Off, there's actually a good amount of content available for the $50 asking price.

I've been a big fan of the Star Wars universe since I watched the original trilogy as a child. I even thought the prequel trilogy was tolerable at some points. That said, the Jedi Destiny campaign in Kinect Star Wars is probably the worst part of the Star Wars universe I've ever experienced. Oddly, other parts of the game actually work very well. Galactic Dance-Off is great (cheesy) fun, and Podracing features some of the best racing and driving gameplay you can find on Kinect, and is detailed enough to feel like a podracing simulator. At the end of the day, it's an incredibly disappointing game but, thanks to the extra game modes, not actually a bad one.


This review is based on an Xbox 360 copy of Kinect Star Wars, provided by the publisher.