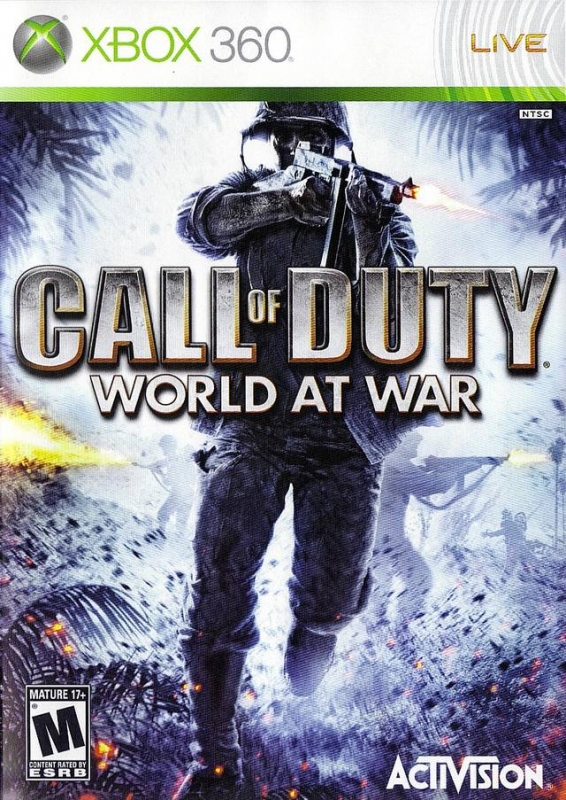 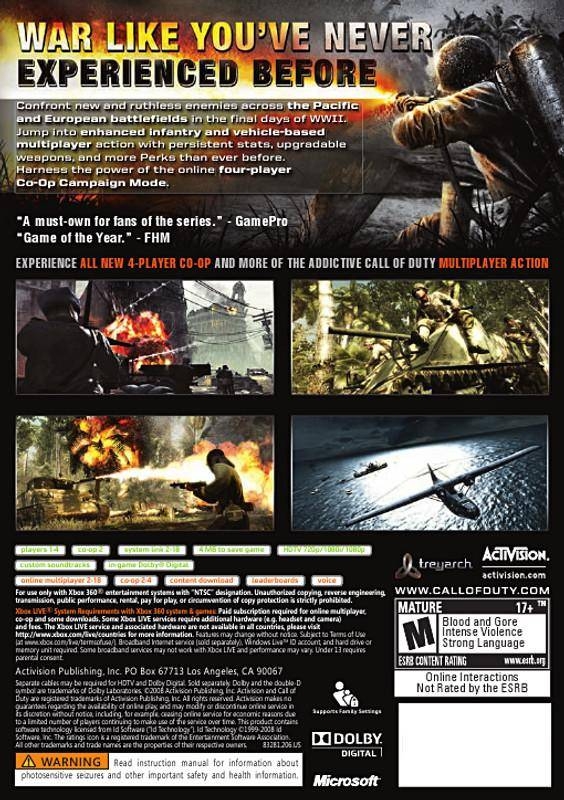 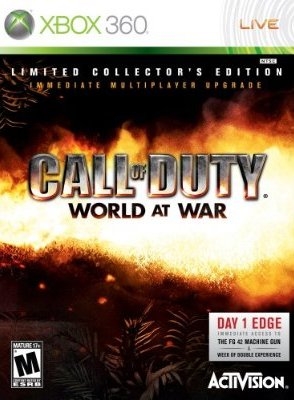 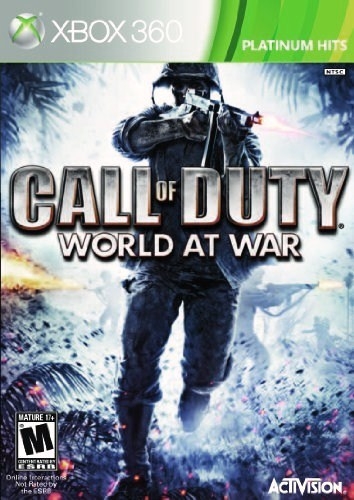 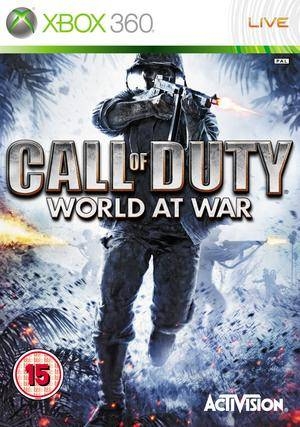 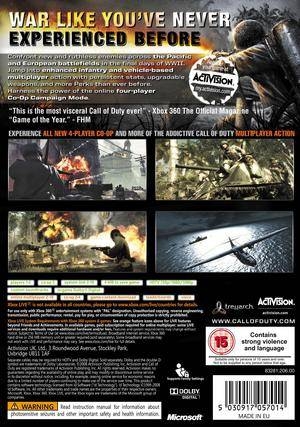 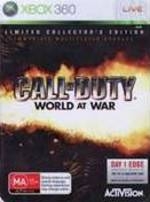 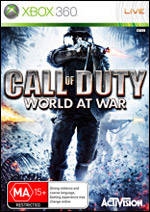 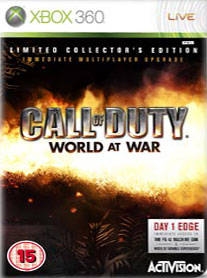 Call of Duty's scope has been expanded once again......

Presentation - 8.5
Gameplay - 7.0
Value - 8.5
While this sequel to the series-changing Call of Duty: Modern Warfare has a lot of new MP modes to it, the copied gameplay on so many aspects tarnishes World at War's ambition.

After millions of people experienced the impressive new formula Infinity Ward created with Call of Duty 4: Modern Warfare, there was exetrmely high hopes to see what Treyarch can build upon.  That ambition of building on the gameplay is seen as taking a dead halt to play everything safe.  As unfortunate as the new gameplay structure (or lack thereof) may feel underwhelming, the new online and offline co-op/competitive MP modes makes World at War still worth your time.

While fans enjoyed the "leg-stretching" Modern Warfare did to the series, it was time for the Call of Duty partner developer Treyarch to take the reins back into it's known WWII territory.  Even though it may not jump into as much new territory as Call of Duty 3 or 4, the plethora of new MP modes still holds some great value in this popular title.

In World at War, you take control of 3 characters: Private Miller, Private Dimitri Petrenko, and Petty Office Locke who you play for one mission manning the gunning position in a Catalina (plane).  When controlling Private Miller or Petty Officer Locke, you'll venture into a new area in which the CoD series has never been before: The Pacific Theater.  The Pacific Theather of WWII is really played out well because, with the flexibility of an M-rating (like only CoD4 before had in the series), you get to play against a more interesting enemy that could be compared with it's ally Germans like comparing black and white in a sense of how their variations of tactics were portrayed in this game.  Fear not about missing your share of action in the Russian/European front as well for that's where your the 3rd controlable character, Petrenko, comes in.

^Finally, that one missing piece in WWII CoDs is filled: Usage of the Flamethrower

Throughout the Pacific Theater, you'll fight the Japs head-on in some well known island battles.  With this change of scenery comes a change in tactics.  Your enemy is normally the one on defense which comes the advantage of suprise thanks to the vegetation.  For one moment you could simply ready to advance to your objective, only to be caught off-guard by a few hidden enemies ready to plunge their bayonets into you.  While the new direction of the Pacific Theater gets much of the treatment, the usual European/Russian has some nice variations as well.  The problem with many of those "extra" or "wow" moments feel as if they've all been pulled off better in Call of Duty 4 and it leaves you wondering if the could've tried something else.

The overall presentation does feel like much of the same as Modern Warfare but in better fashion.  You have better vegatation, character models, lighting, among a few other things.  Some things seem to have stayed the same like smoke effects and a bit of an underperforming framerate in comparison to Modern Warfare but it's more understandable with the extra activity going on.  What's another unfortunate sighting that I had major quarrels with almost all Call of Duty games is the respawning enemies and unfortunately it's pulled off in the same fashion of crossing that invisible line with no shown improvement or change to it.

One thing that could be found to be very impressive by Treyarch in Call of Duty 3 was it's story.  While it didn't make leaps or bounds over it's competitors, it showed a nice side to it's WWII campaign with only a cutscene per level.  Gone is the cutscene idea and replaced with the dynamic loading screen brought by Modern Warfare, it's certainly still a nice gesture of telling the story but it's only another thing found (although small in comparison) that was just brought over from it's predecessor.  Overall, the story itself is well made that has it's parts of both sad and joyous scenes. 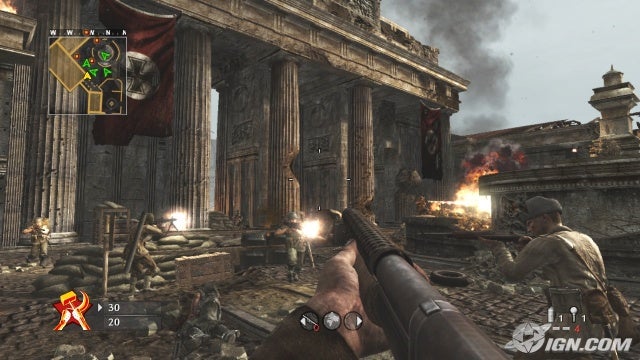 ^Treyarch once again improves upon graphics, making it a "console graphics king" competitor for it's time

Where World of War thrives in it's change of scenery and good pacing, it falters in the overall gameplay that almost identical (save the different weapons) to that of it's year older "brother" Call of Duty 4: Modern Warfare.  You have the same control layout, modes and perks for the MP that even hurt the WWII-realism, and other subtle things I may or may not have mentioned.  What I mean by the hurting of the "MP-reality" is with certain perks and challenges you completed, like in Modern Warfare, you can choose certain upgrades for your weapons.  The problem with this is some of these upgrades weren't even realistically possible like silencers for almost any rifle, submachine gun, etc. or the WWII-equivalent of an ACOG scope.  This could be minor complaint to many but to begs the answer of whether or not the approach could've been at least varied a little bit to be called it's own experience (not counting that it's WWII, not a modern setting).

While World at War's gameplay may invariably have far too many similarities, it still shows it own brand of gameplay in certain areas.  There are new weapons and attachments to be used not previously found in the CoD series, most notably the flamethrower which can suprisngly change the battle in an instant.  There's also the use of tanks, although less varied from CoD3, to the bigger sized MP maps.  Also putting to the M-rating to better use is the gorey detachment of limbs of either the arms, legs, or both.  While that doesn't offer a major change to how the game's played, it is nice to have the next level of what WWII is like that has been portrayed in other mature-rated WWII games.

^(Nazi Zombies) One of the greatest new co-op modes of this gen, period.

What's a very suprising deal with World at War this the great new amount of MP modes offered in World at War.  You now have Co-op and competitive campaign options with the main difference being in competitive that you strive to kill more enemy AI before your friends which racks up more points and combos which increases your points count and at the end of the level, you'll have a winner depending on who had the most points at the end of the level.  Along with the competitive MP, you also have a great new co-op mode called Nazi Zombies which is really the main selling point to World at War.

Nazi Zombies revolves around you and 3 other friends ( 4 total max.) hold out against waves of zombies with each wave harder + stronger than the last.  While killing zombies, you'll recieve more points which will help you open new places and/or more weapon to choose from.  Certain wave numbers will have you clashing with zombie dogs as well which add an extra variety to the mix.  The mode is extremely fun and I can garuntee you the name Nazi Zombies will live longer than the name Call of Duty: World at War which is..........can be considered good and/or bad when thinking about it.

7.8  While CoD:WaW does offer some new things to the Call of Duty series, they're few and far between in retrospect to previous CoD games.  Many things can be admired in World at War but the nearly same gameplay from it's predecessor is something that makes the overall experience (online and offline) falter from what it could have been.