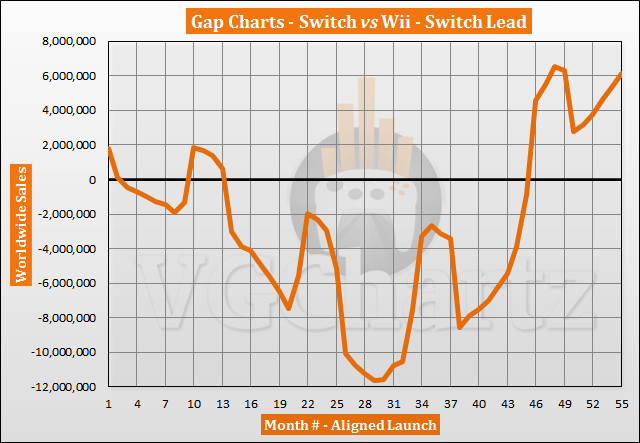 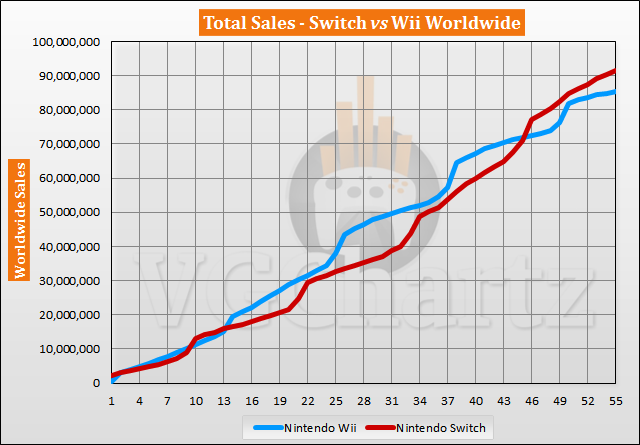 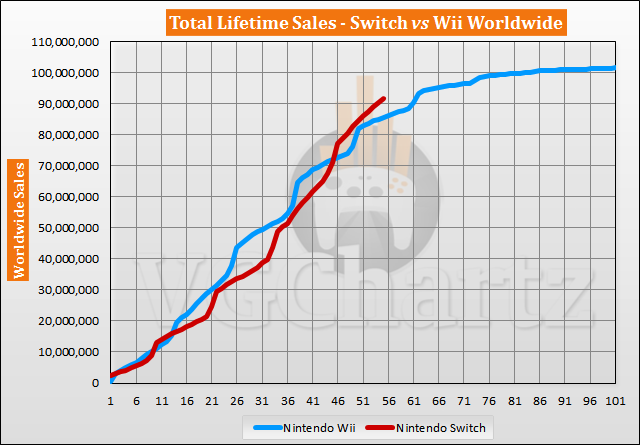 The 55th month for the Nintendo Switch is September 2021 and for the Wii it is May 2011. The Switch has sold 91.59 million units, while the Wii sold 85.46 million units during the same timeframe. The Wii reached current Switch sales in month 62 where it sold 93.39 million units.

The Wii sold 101.63 million units worldwide during its lifetime. The Switch needs to sell another 10.04 million units to outsell the Wii.

This will be a done deal before going into 2022. Crazy to think it will still have a lot of life into it after passing the Wii which seemed like Nintendo would never reach these highs again during the Wii U/3DS era. I still feel like the floor is 125-130 millions for Switch and that's if they launch the successor next year like some rumors started to point of 2 weeks ago.

The thing is: I don't see the sales dropping below 20 million next year with the huge amount of exclusives coming to the console (Bayonetta 3, Pokémon Arceus, Kirby, Mario+Rabbids 2, maybe Zelda)

I would even say next year is going to be 25m+. This year's sales are going to be close to last year's (probably a bit higher). Next year has several big titles to keep momentum going. I think the drop will be small next year.

I do agree with that, but recent rumors have me wondering if they will kill it sooner than later with the "Pro" model being now rumoured as a successor.

When Switch passes he Wii are we going to have people claiming that the Switch isn't the best selling Nintendo home console? Because by my standards the Switch is absolutely a home console, but just one that I can easily take on the fly to other places. The thing barely comes off the dock.

I agree in part; I think it will officially be Nintendo's best-selling home console when it overtakes the Wii even if you disregard the Switch Lite (which is a strictly portable model) sales.

The argument we will hear will be that the hybrid models needs to outsell the Wii without the Lite. And then that will also happen.

Technically that's right. The Lite is handheld only, so it shouldn't be included in Switch sales if you're talking hybrid/home console sales.

It's tricky though. It's the same platform.

I mean it would be like saying the ps4 pro doesn't count as a PS4 because the original only outputs at 1080.

I think it was dumb to release the lite without the capability even if it meant buying the accessories after.

You don't have to wait for the argument. it's already here.

Well that just means Switch will get to have yet another victory party. One for Wii, one for PS1, and one for when it passes both of those without the Lite numbers included. Not sure why people insist on moving goalposts that are going to be crossed eventually no matter the change in parameters.

For the record, I believe Switch tends to reach around 150 million units sold. I spoke of disregarding the Lite just because it is not a home console, unlike the other Switch models. However, of the 90 million Switch already sold, only 15 million are Lite, so that record should be broken next year, as the overtake on the Wii tends to come as early as December 2021.

Switches are portable consoles, those who were interesting to Nintendo for portability bought DS, today those interested in Nintendo in portability buy Switch / oled or Switch Lite

i play switch in docked mode only since 2017

Nintendo treats it as a handheld with a TV output. and so does the Japanese market as a whole. It is terribly feature light for the home experience and every improvement they have given has been centered on the handheld experience.

you have bizarre standard, however, Nintendo also sold DS, and we had two counters, today Nintendo has only one brand, and only one counter, one brand beats half Nintendo of a few years ago : D

Are you trying to argue the Switch needs to outsell both the Wii and DS?

Wii is not the champion, my friend.

Wii is still the best selling Nitnendo home, and I think it will remain so. The fact is that Switch isn't a home console, but a portable, witch a version without output video, Wii isn't portable. Nintendo sold DS... and Wii, nowdays only a brand: Switch...