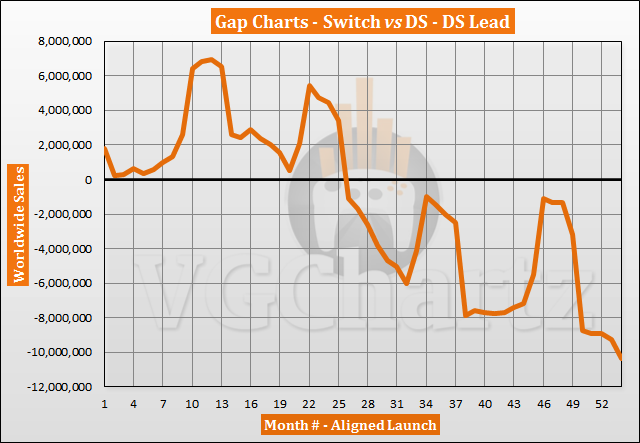 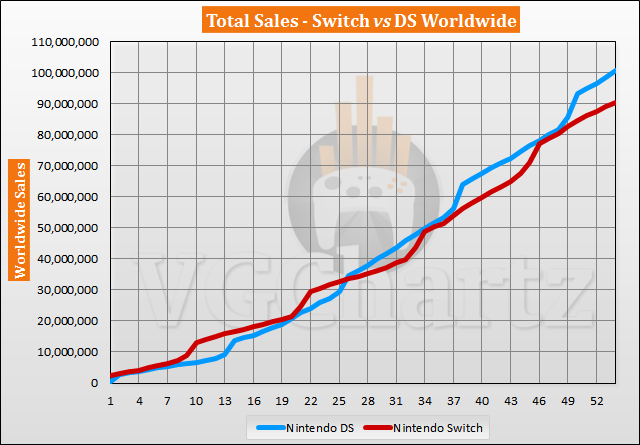 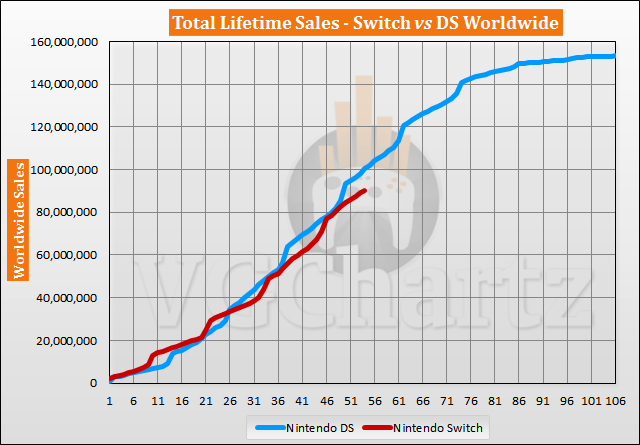 Wow, the DS is an absolute monster!

The DS graph looks really imposing and feels like the Switch still has too much to do to surpass it. But let's keep in mind that Switch is currently getting out of the dry summer period with a new model on the horizon slowing down it's sales currently and the DS will be entering said dry season in the coming months. Switch will still end up selling around 28 millions this year imo, it won't fall under 20 millions next year with that stellar lineup it is getting. New model will keep demand going for a little while, and price cut is still a thing they could use. Pro model could still happen next year after all too (i hope it does). Switch will sit around 125-130 millions at the end of next year.

It will all go by fast and it is really only a matter of Nintendo releasing a Pro model or how long they want to keep Switch on the market. I see a lot of "Switch is almost at the end of it's life cycle, next model 2023" on the internet. But like, if they wanted to do so, they wouldn't slow drip their cards for the Switch. They really aren't marketing the Switch like a console on it's end, going towards a cheaper audience, and that to me says they still have big things for it.

Couldn't have said it better.

28 Million for 2021 is too optimistic. The Switch this year is down by 1 million in sales so far and the gap is only expected to continue widening til the Holiday Season. While so far the 1st 2 quarters of 2021 in terms of shipments are slightly up from 2020. The Switch in Q3 of 2021 is likely going to be noticeably down from 2020, based on the recent data we've been getting from vgchartz, famitsu, & NPD, the Switch is losing it's ground to 2020 quite quickly as the 2021 Switch will likely be down around 2 Million Units by the beginning of Q4. For the Switch to attain 28 Million again, it's gonna need a 13-14 Million Quarter assuming the 2021 Switch ships around 4.5-5 Million between July-September, which is a figure that has never been done by a console in history as even the peak Holiday season the DS was only 11.89, still ways away from the 14 Million figure, the 2020 Switch sold 11.58 Million during the holiday season. While yes the Switch Oled will boost sales, it won't be enough to sell unprecedented Holiday Season numbers close to 14 Million, especially with a still on-going chip shortage that's expected to continue into the Holiday Season. It is highly improbable the Switch this year could reach 28 Million, best case scenario is 26 Million but I think 24 Million in 2021 is more likely.

I don't agree. The main reason why sales are down currently is since they announced the new model was coming. The new model + stronger lineup can make it so it sells on par with the previous years. They will also most likely try to sell the stocks of basic Switch so we can expect bigger deals for Christmas and Black Friday. I doubt with all date it will lose another 2-3 millions compared to last year. Also, Christmas 2020 numbers were underwhelming, i doubt it will do worst.

But on the topic of your first post, I think the switch does have a lot of life left even without a pro model. I just don't see that happening now. It's starting to get too close to the successor. Had it not been for the OLED, I would have thought it was possible early next year, but they need room for that revision to breathe.

The switch's biggest advantage is that it will have a longer life than the DS. The earliest the successor will be announced is e3 2024 and October of 2024 at the latest with a launch in holiday 2024 or March 2025 respectively.

As long as the successor is announced about 6 months prior to launch, the switch will only fall 5 million or less year over year for the next few years.

If it doesn't catch the DS, it's going to be close. But it all comes down to Nintendo giving the switch enough time. As long as the money is there, they won't kill it off. And given the fact that there has only been a price drop in Europe so far, they still have a lot of tricks up their sleeve. I foresee another silent, cost-saving revision coming, but not a pro model. Even if sales start to slump, the profits will stay high enough to run the switch for around 8 years.

Which console reached 100mil the fastest?

DS was the fastest PS4 was the second fastest

And Switch will be the 2nd fastest now

Keep in mind that the DS coexisted with strong numbers from Wii, PSP, PS3, mobile, PC and X360 while the Switch only competes with PS4/5, XSX, mobile and PC. Truly the DS was something special and completely unexpected in front of the threat of PSP, with strange game launch offerings such as Metroid Prime Hunters, Feel the Magic XY XX, Ping Pals and others weird games to come (Metroid Pinball, etc.) along with a handful of traditional meh games like Mario 64 DS, Rayman DS, Ridge Racer DS, etc

That doesn't make sense, since we are talking about a portable Playstation (PSP), Nintendo's most successful home console (Wii), and two very competitive home consoles (PS3 & X360), the rest is common.

Now the Switch does not compete with another Nintendo console (huge gap), the PS4 is now phased out, and the PS5 and XBX are facing shortages and development delays due to covid.

The DS was competing against some big players and still managed to nearly be the most successful console of all time (just a fraction below the PS2). It was a monster.

Having said that, the console and games were at half the price as that of the Switch, though that's not your argument but I can also explain why it worked so well.

Given the same competitive landscape as the DS, the Switch may not have done so well, but it's hard to imagine such a scenario since, the Switch being a hybrid, could not easily coexist with another Nintendo console unless it were of the type of a virtual boy, not a standalone home or portable.

The new OLED model and the already awesome software lineup for next year should save another 20M+ year for Switch. I guess we'll see a close race until the end. I still can imagine a possible cross during Switch's upcoming holidays.

Next year in determining if Switch can outsell DS or not as after its upcoming holiday season DS started to slow down quite a bit.

The problem is that they did not well promoted the OLED new screen, they should have done a presentation to show both screen with a close comparison so people would realize how nicer it will be, but maybe they have not done this because the difference is actually ridiculous.