The world of game crowdfunding seems to net two exclusive results for me: potential GOTY/Indie GOTY or depressing blunders.  Tapping into the wholesomeness of farming sims like Harvest Moon, Spanish developer Chibig (Deiland) set out to reinterpret that gentler gameplay loop within a tropical setting.  It also has an ambitious story arc for such a limited team and budget.  The reason Summer in Mara rests in that second Kickstarter category stems from those exaggerations leading to an incoherent & unpolished vision.

You take control of Koa - a girl who was rescued from a shipwreck by her alien-like grandmother, Yaya Haku, when she was a baby.  These two live on a secluded island and Koa begins learning the importance of sustaining herself and The Sea of Mara.  After a calamitous storm wrecks Haku’s boat, Koa prepares to set sail for adventure and find her grandma. 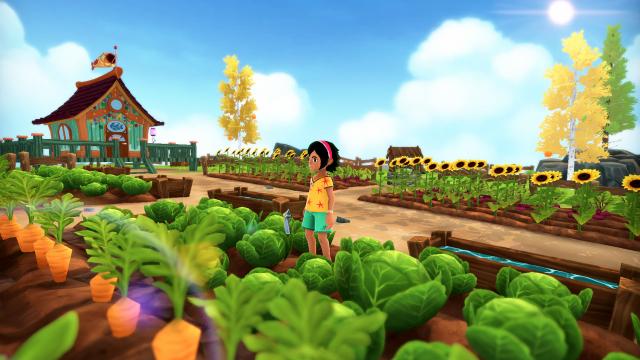 For as vague as the "call to adventure" may seem here, the end result is essentially Koa putting herself in other character's predicaments - whether it's welcomed or not - and eventually gaining an eclectic variety of new friends.  The central task about finding Yaya develops into something much grander as she uncovers an alien race's suspicious interest in this planet.  There's an obvious ecological message behind this but it doesn't play a huge role until the main quest’s second half.

Looking back on it, I'm of two minds about Mara's story.

To its credit, I'm a fan of the distinct races and the world-building.  The gelatinous Qüido (Haku being one), along with more expected fantasy race designs, form a modest retinue to appreciate.  Although not all treated equally, the friends Koa makes along the way are wildly varied in looks and attitude.  The different eccentricities make them interesting enough to enjoy their company.  There's this... intangible-yet-real feeling of wholesomeness embedded within the script. 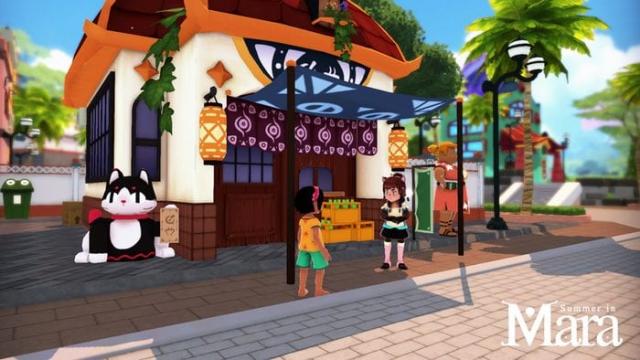 Its biggest detriments lie in a few areas.  Considering the stakes that Koa unearths, there's this odd tension between the fate of Mara and casual adventuring like you're just a simple farmer selling your wares.  It's also odd for what's technically a kid's game to rely on an encyclopedic method of storytelling.  There's reams of unnecessary text here.  The subpar localization further dampens enthusiasm.  Oftentimes dialogue takes on a type of properness not seen in public:

Granted, I am paraphrasing here; and yet, I’m not being exceedingly hyperbolic with this example.  It'd be one thing to find occasional "congraduration" typos, but it seems like the intended mood or meaning was also lost in translation.

Whether looking at the moment-to-moment cases or grander arcs, this narrative could be succinctly summed up as wholesome mediocrity.  It's clear how often dialogue is mere window dressing for the game's copious amount of quests; the variety of characters can't paper over that.  The mismatched sense of urgency also doesn't make sense in context.  Even the game's ending is nothing short of rushed.  I can appreciate Mara's message of sustainability and appreciating resources, but it comes at a huge cost. 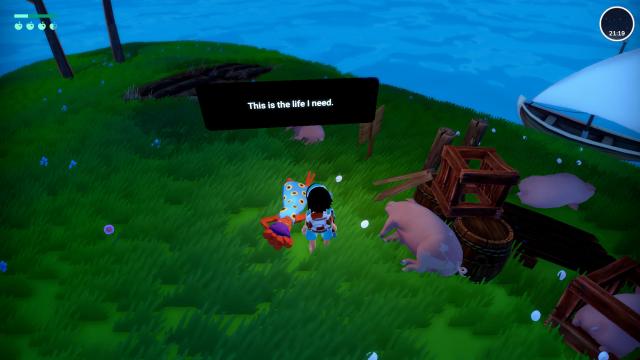 The ecological motifs actually fit more comfortably in Mara’s gameplay.  If I were to distill it to the core components I'd make this comparison: part Harvest Moon for its farming/crafting systems & part Windwaker for its nautical exploration.  The latter is more subdued though, as there's not really any combat nor fully-fledged dungeons. The vast ocean within this archipelago is more of a stopgap for casual trips between nondescript isles, your home island, and the city of Qälis.

As you slowly begin to understand the rules, your itinerary might follow something like this: amass natural resources at your island via farming or mining, travel to Qälis to catch up with quest-givers, pursue those objectives, travel to secondary locales for potential treasure, then back to step one.  The flexibility afforded to you means these can be rearranged, but the gist remains the same.  The mixture between day-in-the-life demands of cultivating food (for you or selling) with helping others is a reliable template for this casual gameplay loop.

Reliable as that may be, this structure becomes kneecapped by the most egregious fetch quests I've experienced since Death Stranding.  I couldn’t believe how far Chibig was willing to go in stretching out Koa's main quest – along with several secondary ones.  Koa's quest-givers, called "friends" by her, are so willing to exploit this that they'll stop mid-sentence to conjure up another task for her.  Like I previously mentioned on urgency: a research lady thinks a tent-making skill is more important for Koa than figuring out how to stop an alien threat.  This one-track mindset becomes so pernicious that the island-hopping gets tedious.  Even the rare island with unique personality is undermined by being an obvious façade to finish one objective and never see it again. 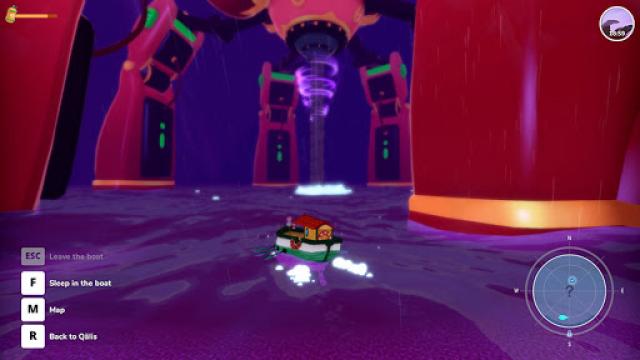 Beyond obscene repetition, there's a lacking sense of direction and rhythmic flow as the world opens up.  There are various examples of this: tasked with meeting someone without any subtle means of easing you in the right direction, mismatched dialogue where you're clearly ahead of the curve with one character's quests but not another, and obtuse signposting for acquiring necessary items.  This is elucidated by Mara's substandard tutorial and opening hours.  As someone who has a firm grasp on the gameplay now (post-finale), I wouldn't mind replaying the beginning to measure the paltriness of the tutorial info.  You'd be hard-pressed to find someone who's completed this without some assistance from Google or the developer's Twitter channel.

On top of fundamental issues, secondary annoyances pile up like sand.  I can't fathom why Koa's island workshop enables you to manufacture a set number of items (up to 20) while the Qälis’ workshop forces you to construct one item at a time.  The 2D diving mini-game is a clunky mess.  The world is in tableau: there's a 24-hour day/night cycle but characters on dry land remain static.  Technical anomalies run the gamut of clipping issues, UI pop-ups to talk with NPCs failing to show, and arbitrary invisible walls ensnaring until breaking past them.  I could go on about the insipid UI and other quality-of-life fixes that could be made, but the list would become quite daunting. 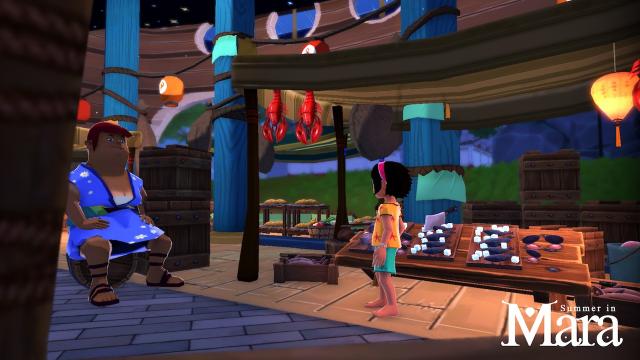 These critiques are a shame too because I revere the decent gameplay kernels as well.  Although I dislike how burdensome Mara initially acts with players, Chibig is quite dedicated to reinforcing your self-sustainability through gameplay.  The cycle of tending to crops and gathered livestock systemizes the farm life in a digestible – albeit restrictive – manner that young kids can recognize.  Plus, supplemental mechanics like food offerings to Mara and recycling add to you feeling like a guardian to this delicate planet.  Considering this with the noted negatives?  Your mileage may vary.

The tropical tapestry woven in Mara doesn't match the postcards.  The sparse watercolor cut scenes are easily the best quality.  They sell the emotion of a scene that – frankly – can't be accomplished with the stiff in-game character models.  I can totally respect being on such a tight budget though.  When considering such constrictions, I can appreciate the brighter art design and the flexibility afforded to your island's curated flora and fauna.  All that said, I still can't ignore the underwhelming technical chops.  It takes some time for me to mentally ignore the last-last-last-gen anti-aliasing I’ve seen here.

Sound design is more or less functional if not a bit... hollow too.  I know, I know; consideration for the budget again.  For as tepid as my response can be for design, I'm happy to elicit some kind of reaction to Adrián Berenguer's soundtrack.  It's not in 2020's/2021's upper echelon of OSTs, but it has several upbeat gems I really cherish.  Mara's not exactly doing much for me if I have to cling to a quality I'm hot & cold about. 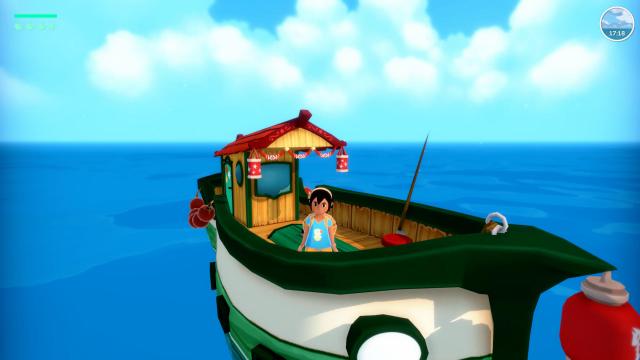 Considering today's current struggle with a pandemic, I've got to credit Chibig for crafting a game with such a wholesome attitude pulsing through its veins.  Although I do think you can put a Jackson Tubman ($20) towards better titles, I don't blame anyone grabbing feel-good nourishment like this either.  Nevertheless, my problems stem back to the game proper.  There comes a time when repeating fetch quests feel like aeonian punishment – as though the boulder continuously rolls back down the mountain.  Between this, the technical annoyances, and shambolic story, Summer in Mara slowly morphed into a winter of discontent.