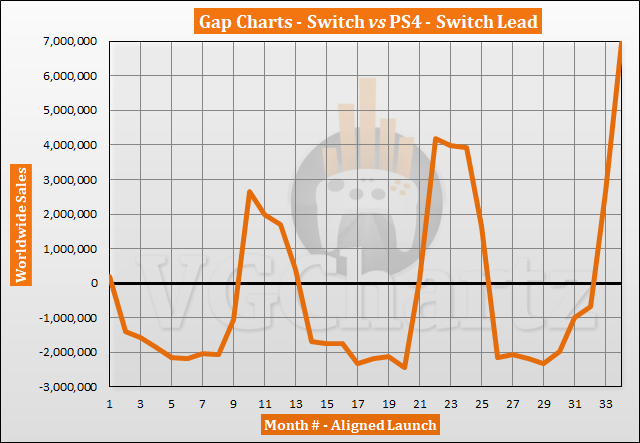 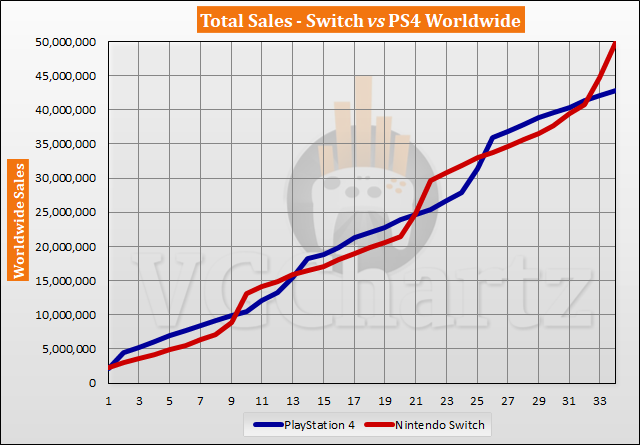 from january to mid april.

So Switch needs roughly 300k per week. Last year it was 250k. Could happen.

Switch needs to average a little under 1 million/month for the next 4 months to stay ahead of PS4s 2016 holiday boost.

This is very likely the end of the double helix. Switch will probably stay above the PS4 instead of the annual criss-crossing.

Unless a meteor or apocalypse destroys nintendo's inventory, it's guaranteed to stay ahead afer the ps4's holidays 2016.

Now it's only a matter of who has the longer legs.

Almost 7M lead, that's gonna be difficult to beat even for the PS4

The cliff will arrive any day now.

You knew we were waiting for this one didn't you...

Been waiting for this 1. Incredible acceleration by the Switch! Now we just have to wait a few months to see if Switch can keep its lead this time. With new horizons on the horizon (pun intended), I think it can, just!

All it takes is a look at sales to see that the switch will for sure be confortably ahead after the next 3.5 months.

This is the biggest gap so far, when is the next cross

This is getting really interesting, I never expected Switch would give PS4 such a strong fight.

I am sure of yes and no respectively.

I'm still thinking PS4 will win in the long run, but I'm pleasantly surprised that it's even competitive. I honestly didn't see the Switch doing this well when it was announced. On the other hand, I thought the Wii U would do really well, so what do I know.

Indeed, what do you know. Instead of Sam Darnold leading the Jets to a Super Bowl, he was flailing with his arms on Monday Night Football and saying that he's seeing ghosts.

The ghosts are actually visions of where the defenders will be. Once he learns to harness his psychic powers he will be unstoppable.

Here are my key takeouts:

Cause Switch isn't global ? Wii and DS weren't global ? Switch is doing better each year in Europe and it will maybe help for great legs since maybe it will peak later there than other places. In France it is completely dominating and doing way better in UK and Spain. Switch is not even half of what 3DS did in Japan so why would it be close to reaching saturation since it could always surpass it in the long run who knows. Switch is also doing better than PS4 in the US and is projected to take over China by 2023. The argument of it having only Japan and US is over now. Sure it's not as strong as Europe but still strong enough to surpass it WW, to me this is proving the Switch is more Global.