Gardens have always been something I’ve admired at a distance, rarely wishing to engage in the toil.  It’s never a matter of simply tossing together everything you’d hoped for all at once, but one of continually reiterating and nurturing until it blossoms beyond your initial plans.  William Chyr’s Manifold Garden is not too dissimilar in approach despite a completely different setting.  Instead of breathing life into a colorful tapestry of plants, you’re reevaluating and adapting to grand architectural structures that seem to be infinitely replicated in every direction.  Despite not having the sensation of getting your hands dirty, the toil in tackling puzzles in this 3D space feels no less rewarding.

You take control of a nameless avatar in this first-person puzzler.  There are no real discernible features about you other than operating on the typical moveset of a regular human: walk around an environment and pick up objects.  Although the mystery and wonder are all that initially compel you forward, the main task is removing the “weeds” in this garden.  This blackened, corrupted material has invaded certain portions of this world and needs to be snuffed out. 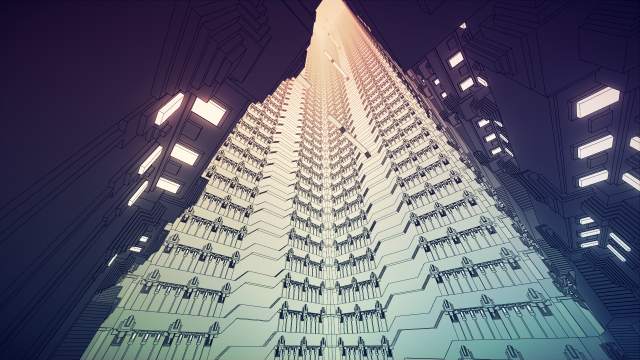 There isn’t much of a substantial story outside of this, which I think is for the better.  Even with really limited scripts, there’s no telling just how ostentatious indie developers can get with their concepts.  Although Chyr has mentioned the game is intended as a metaphor for several centuries worth of physics discoveries, the claim feels flimsy.  It’s like a post-hoc rationalization to give meaning when the game provides enough justification on its own terms.

The main conceit is deceptively simple, and familiar to recurring readers.  This unidentifiable avatar wakes in a sterile cubic room.  Almost immediately, you’ll notice switches and door openings affixed to strange locations, perhaps high along a wall or ceiling.  What gives?  The floor, your current perspective of gravity pulling you downwards, is only one-sixth of the total surface area you can explore.  Walk up to any wall, hit [space bar], and suddenly it’s transitioned to your new "floor."  A few more rudimentary moves later, you’ve likely completed the first puzzle and have a glimpse of all the mind-bending possibilities to come.

“Hey,” you, ever-loyal reader ask, “is this basically the first-person equivalent to Etherborn you recommended before?”  Indeed!  It’s totally fair to make the comparison with the key contrast being how you select when to transfer gravity here, rather than relying on predesignated ramps.  And while I still respect Etherborn’s less-popular design decisions and its heightened demand for traditional platforming, Garden accomplishes more with the unique restraints of its perspective.

One of the most surprising considerations of the gameplay is how untethered you feel in shifting gravity.  For example: even the specificity of stairs or the indents cut out in a building’s column are enough for you to shift gravity and stand on that edge.  Because of your avatar’s quasi-ethereal nature, it’s easy to become accustomed to this ruleset.  Even if you tumble off an edge, Garden’s infinitely-looped “world-wrapping” means there are no Game Over interruptions; you’ll just fall back to your original location.  And this looping not only accounts for sumptuous visuals but as a part of puzzle-solving.  After learning about the boundaries, a type of understated routine starts to settle in, making traversal shortcuts or tackling rooms by examining them from several sides in a matter of seconds.

For a game about puzzles in an M.C. Escher painting, Garden does a good job ensuring you’re not overwhelmed.  The cleanliness of the art style and the perfect angularity of each area are deliberate, well-considered design choices.  Each designated ‘floor’ also has a corresponding color.  So, if the current floor has a red tint the targeting reticle will recognize a different base color for each corresponding wall (front, back, left, right).  The disparity between them is sensible too: if ‘down’ is currently red then ‘up’ is always blue.  A lot of work went into handing players enough to intuit the next brainteaser without resorting to a forced-in hint system. 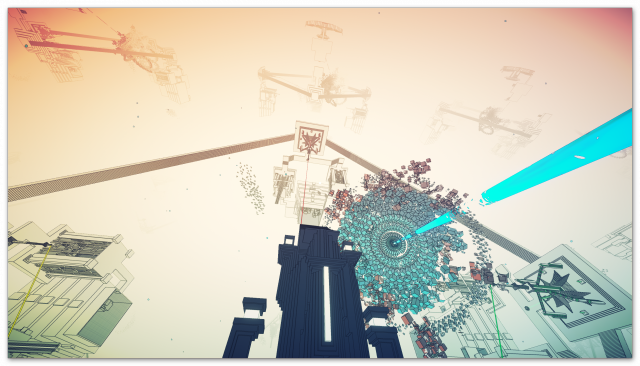 Although I have some complaints, the majority of puzzles are downright awesome—dare I say sublime in a couple of instances.  After the initial puzzles, Garden gradually builds on the gravity-shifting mechanics to include setting color-coded boxes on pressure plates, maintaining power between areas by manipulating gargantuan tetrominoes, and sometimes guiding water to water wheels.  Each of these has a specific ruleset that must be considered.  Although the game does lean on pressure-plate tasks, the economical pacing of other ideas sprout up just enough for it to never feel tedious.  A bigger issue I have comes down to a few specific hurdles where I feel like the developer played things too closely to the chest.  To avoid giving specific spoilers - a few times the next step is deliberately hidden outside the area you’re guided towards, which leads to aimless wandering.

When considering how limitless this world constantly feels, it’s sometimes a marvel to think of this as ostensibly a one-man project.  It came as no surprise to me discovering Chyr’s sculpture work outside of the video game medium.  The rows of repeating structures with grand hallways, fantastic columns, and more have the same grandiose ideal found in artists' renderings of Greco-Roman temples.  Even when feeling overwhelmed by its mesmerizing scope there’s something so visually appealing about the concise geometric patterns.  Plus, Garden’s soundtrack and sound design go a long way in complementing this strange and austere visual tone as well. 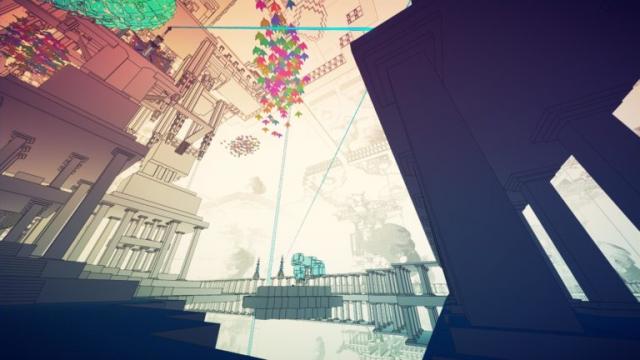 As with many puzzle games I review, value is going to be a bit more subjective.  It’s a $20 title that will span around four or five hours for intermediates in the genre.  There isn’t a New Game+ or collectibles to bolster replay value.  Personally, I think it’s fitting to have a basic campaign where you’ll experience all Garden has to offer.  It may be too high for the dollar-per-hour curmudgeons (which I can respect), but the mental expenditures I made for so many satisfying puzzles feels like it pays off enough.

Manifold Garden is easily among the best puzzle games of this year, arguably of this generation.  You can see the inspirations of M.C. Escher’s Relativity fused with games like Antichamber and Etherborn, tackling perspective and gravity respectively; despite that, there’s something more to it.  Whether it’s the uncharacteristic appreciation of architecture or the sense of limitless scale, there are some nuances that make it feel refreshing.  And it’s with that new take, combined with good pacing, encouraging puzzle layout, and awesome visuals that make this a garden well worth tending.

This review is based on a digital copy of Manifold Garden for the PC, provided by the publisher.