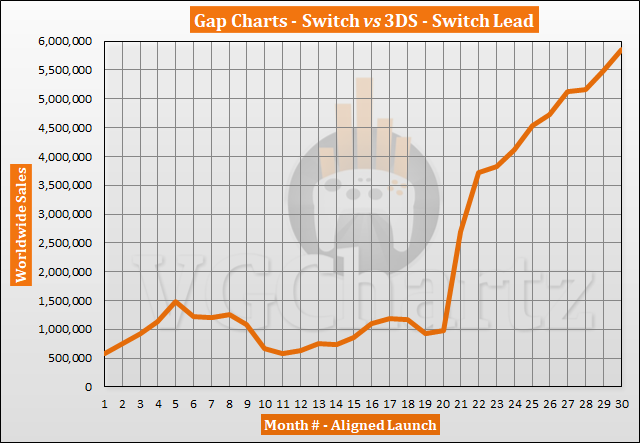 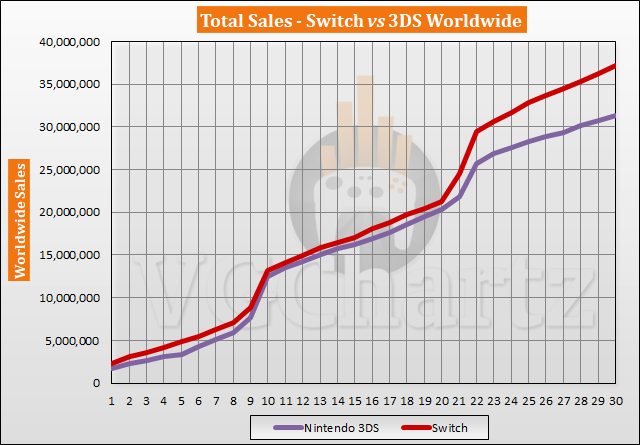 The 3DS launched in February 2011 (however, 3DS sales have been aligned to March 2011, since it only launched at the end of February in Japan), while the Nintendo Switch launched worldwide in March 2017. The Switch has sold 37.20 million units, while the 3DS sold 31.34 million units during the same timeframe.

Well, Switch has clearly the better momentum, and things will not get better for 3DS with the Switch Lite and Pokemon releasing. So at this point I don't believe Switch will ever fall back behind 3DS again, which means Switch will reach at least about 80M lifetime, probably more.

Now with the Lite coming out, the real slaughtering will begin

Crazy that Nintendo managed to sell almost 80 million 3DS tbh, it really needed several huge marketing push while Switch has been getting distant by 6 million already with no help. Now that they are pushing it harder, like honestly i can't see it not breaking the 100 million copies.

Literally.. and some still think that. This holiday season will be enough to convince everyone i think. Like once Switch will be at 50 million in less than 3 years...

Switch is half of the 3DS total install base already. That's kinda crazy

And without any price cut/new model or aggressive promo and bundle. Literally the Switch is the best thing that could happen and Nintendo managed it well.

3DS had to receive a very significant price cut to get to those numbers. Switch probably won't get one at least until Holiday 2020, and even then it'll likely just be a pack in title. Depending on where Microsoft and Sony position their price points there might not be too much pressure even then to push much further.

With the 3DS they tried to sell a machine that cost them $100 to produce for $250, it's not surprising it needed a significant price cut to sell. Meanwhile the Switch has been priced appropriately. So I wouldn't hold the 3DS's price cut against it's sales.

"Following a teardown of Nintendo's new handheld machine and an analysis of the components therein, iSuppli has pegged the cost of manufacturing each 3DS, including packaging, at $103.25."

Obviously Switch will sell more than 3DS, it's just a matter of how much. At the rate the 3DS momentum went, and the way Switch momentum is going right now, I'm not so sure the current gap will ever stop increasing until the end of the Switch's life. 3DS had very good longevity for a Nintendo system, but really only has 2 good holidays left before its momentum stalls on the chart, and if Switch can keep going past that, that curve might only get steeper.

It was a close fight for 20 months, but the 3DS will be eating the Switch's dust from here on.