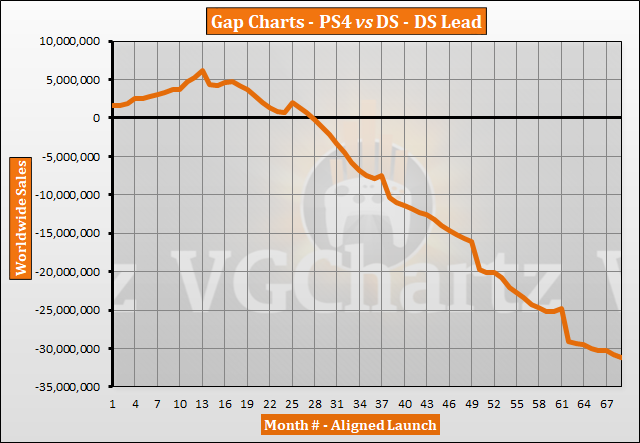 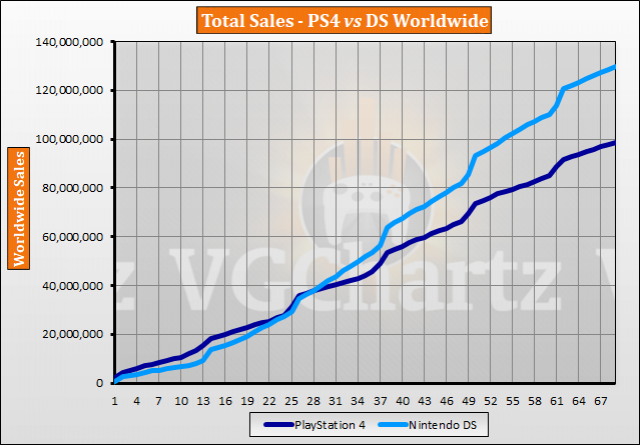 it will start to turn upside down soon, ( ds makes 8m the year after and 3m after this and 1m in the last year so ps4 will beat it without worries to the ground ) the question is will the ps4 equalize the level until end of its life

PS4 is too far back already and sales are already slowing down. Sony would need to ship an additional 50M PS4 to equalize the PS4, and with it's successor being almost around the corner already, I don't see how they could do that.

@Bofferbrauer2 Yes, I am not saying it will be easy, but it is not impossible, if PS4 has long legs ( as I assume, every other PS console had long legs, except PS3 )

Weird as it may seem on the surface to compare the two I actually find it interesting to see the second highest selling system ever stacked against the soon-to-be-3rd. in terms of curves. PS4 hit its stride sooner while DS was more of a late bloomer.

If it wants to be third, PS4 better start closing this gap. If it breaks even from here on out, earning as much to the end of its life as DS will until from this point until the end of its life, PS4 will get about 126.5 million. It has less than 8 million gap with the DS to work with before it's not on track to pass the Game Boy.

@HylianSwordsman PS4 can not and will not do as much as ds from this point on because DS made just 8m, 3m and 1m respectively after this year onwards, which is very very very poor

Why not compare with Ps2?

because they don't have the exact chart of sales of ps2 .. although I think they can see the official numbers and create a chart for it .. it doesn't have to be difficult.

There is absolutely no chance on earth that the ps4 beats the ds or ps2. Stop kidding yourself. I will bet on it.

there is nothing impossible, never say never. I think it has a very good chance of reaching ds and ps2, it will be diffucult yes, but it can.

Think you meant DS? It's passed out the 3DS a good while ago.

You can't compare PS2 and PS4 because it's stupid :

Normal to the PS2 continue to be sell with the most flop for Sony (the launch of the PS3).

You can type a bible worth of text 100x, it wont change the fact that the ps4 will never pass the ds or ps2. It has ZERO chance. But that doesnt change the achievement of what the ps4 has been able to do in an entirely different situation. The ps4 is not in the ps2 situation. At all. I think the ps4 is actually more impressive. It wont have the luxury that the ps2 had with emerging markets that bought the ps2 like they did. The ps4 did AMAZING. The ps2 had legs due to new markets that bought it up like crazy for years. The ps4 has been selling ALREADY to those markets... the ps4 also wont be replaced by a 600 dollar system. The ps4 also will not be 99 dollars when the ps5 comes. The ps4 is also well built, and doesnt have the luxury, if you can call it that, of having been such an unreliable piece of shit that, people bought several of them because they failed constantly. The ps4 will basically stop selling once the ps5 hits the market, exactly like the ps3 died when the ps4 came. Your incredible sales predictions for the next several years are.... ahem... not happening. The end.