After decades in the video game industry, Nintendo has attracted its fair share of clones and copycats. The latest lookalike is Pilot Sports, a flight sim that is, ostensibly, filling the gap left behind by Pilotwings Resort, which launched on the 3DS all the way back in March 2011. Unfortunately, Pilot Sports is a poor analog for Pilotwings, due to tiresome locales, repetitive objective design, and some graphical and technical issues.

Pilot Sports is a flight simulation with arcade concessions. It strikes a nice middle ground between accessibility and physical realism throughout, even if some of its trials are marred by tedium or technological quirks. Players, either solo or in four-player local multiplayer, will be able to pick up and play this title easily, but they will also need to pay attention to gravity, lift, wind, and, in some cases, fuel. 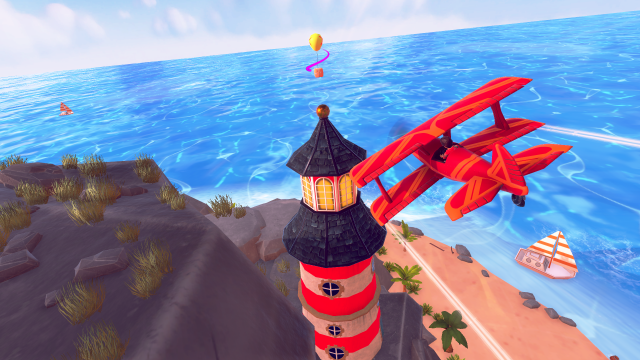 Alongside the game's physics, its moment-to-moment gameplay is a highlight. Steering, boosting, and accelerating is usually easy and smooth, especially when piloting the airplane. The plane is the best-feeling vehicle of the bunch; it's weighty and agile in the air. The jetpack's controls, while responsive, are stiff at times. The parachute's movement is often fussy, and the glider a bit labored. Still, developer Z-Software has done its best work in terms of mechanics and physics.

Less admirable is its mission design, presentation, and technical effort. Pilot Sports features six mission types—Race the Clock, Time Attack, Collect-A-Thon, How Far Can You Go?, Platform Fun, and Free Fall—but they all tend to bleed together. So many boil down to flying, falling, or gliding through a series of purple rings, set to a timer—fine in small doses but wearisome over long sessions. Those that are different, like How Far Can You Go? and Collect-A-Thon, are either slow-moving or tediously long. As you progress through the game’s 50+ stages, you'll likely encounter a sensation of "been there, done that," despite souped-up crafts introduced starting in stage 23 and some later-stage hazards like turbines, mines, and, for lack of a better term, fake rings. It often feels like you’re cycling through the same few variations, repurposed over and over again—only set on a different part of the island. 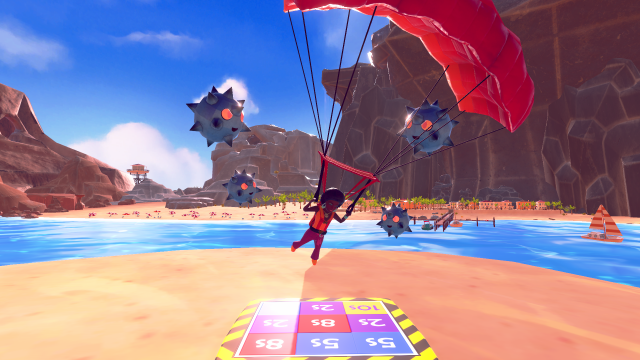 The island, the game's only location, aggravates this sense of déjà vu. Z-Software deserves some credit for getting as much mileage as possible out of a single, tiny island environment, but ultimately the vistas get old and the same familiar landmarks grow stale. There are a few interesting, surprising elements across the isle—like a tunnel populated with prehistoric-looking spiders or a seaside resort town—but these are the exception to the rule.

Not only does the island lose its luster quickly; it looks lousy too. There's a clumsiness to the graphics throughout Pilot Sports, in fact. Menu tiles and icons are generic, the game's eight characters look like they walked right out of the uncanny valley, and the oversaturated island appears generations old—like an uprezzed PS2 game. There are also small, throwaway moments that drag you out of the game: the poof of smoke that appears where a downed plane should rest, for example, or flocks of papery macaws that fly a short distance and disappear into nothing. 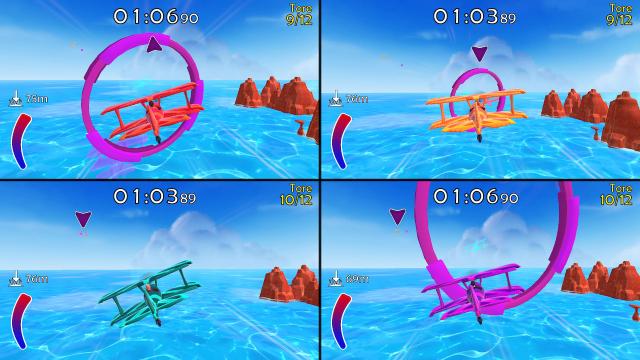 Lackluster graphics pair with technical hitches for disappointing results. Plane stages suffer from a weird glitch where the aircraft appears to phase ever so slightly back and forth, creating a stuttering effect. Then there's some egregious pop-in, among the worst on Switch.

Pilot Sports gets some of the basics right—flying and physics work the way they should—and offers a welcome amount of content in terms of missions and local multiplayer, but stumbles over objective design, geographic diversity, presentation, and technology. In the end, it doesn't come close to matching the high level of polish and playability of the Nintendo series that inspired it. If you're looking for a Pilotwings substitute, keep looking.

This review is based on a digital copy of Pilot Sports for the NS, provided by the publisher.

Really have to give credit to the reviewer for putting into words concepts that can be very hard to explain. I often stumble for terminology when explaining what makes a game fail or work from a "feeling" standpoint. Anyways, it's sad this game isn't up to par. It seems to have gotten a few things right ... perhaps Nintendo can take a crack at an actual Pilotwings Switch game? 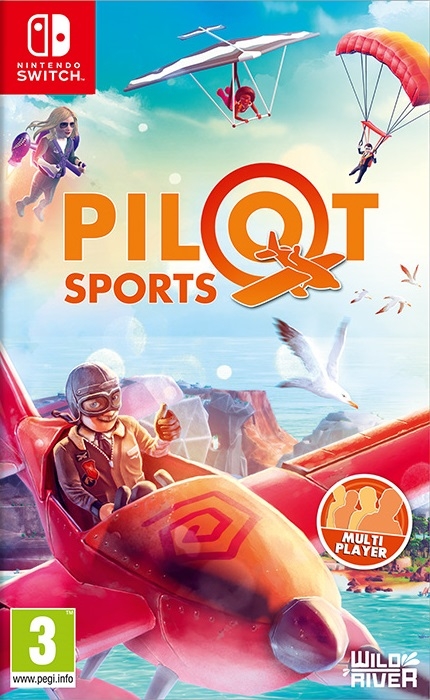