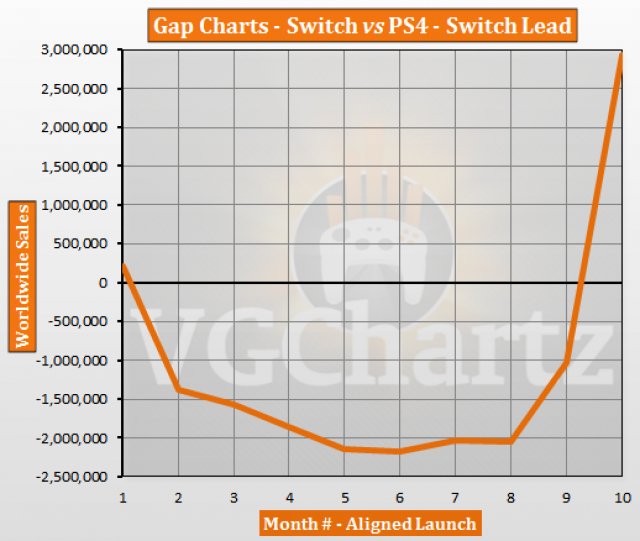 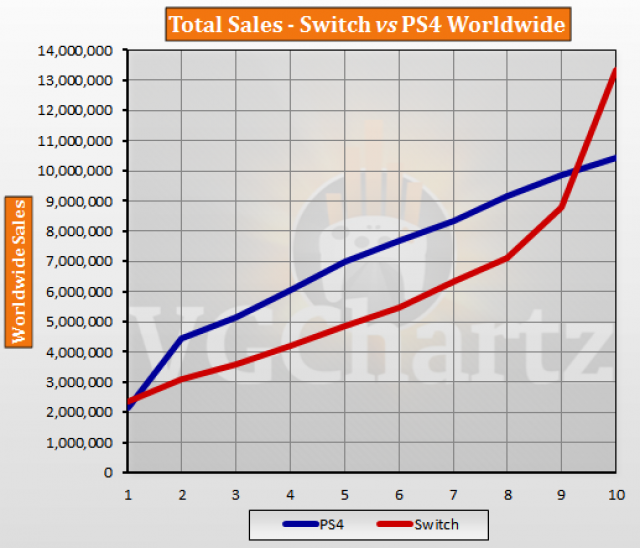 Well were looking at the next wii here

Except I don't expect the Switch to die off as quickly as the Wii seeing how much it is beloved compare to the Wii that never was appreciated by gamers. It was only driven by casual market that got tired of it pretty quickly.

The next DS you mean.

Wii wasn't quickly died, was it never appreciated? about a milliard games were sold!!! ahahah

For month 11 PS4 will win, it was Destiny month and was a huge month.
For month 12 Switch will win, February is a bigger month than October, so the gap will increase.
For month 13 PS4 will of course win cause is November, but it will surpass Switch again only in month 14.

You weren't that far away, nice shot brother.
what's your LT expectation?

When is PS4 lite?

I don't think Switch will have problems doing more than 17 millions if it's going to do around 15 millions on launch year with stock problems.

The PS4 also sold 15 million units in its first year on the market. So that isn't a guarantee it will start outselling the PS4. It could very well be that the Switch won see a massive you increase. Especially since the confirmed line up is rather mediocre compared to last year.

Well it sold 14.2 or something like that. Fact is Switch has an enormous sale potential in Japan. Switch will most likely be up in NA/EU this year and will probably have a big boost in Japan because of shipments.

Switch will probably retake the lead before its 2nd holiday.

I don't think PS4 will be able to catch up the 3 millions in the next 2 months even if it's September and October since Switch seem to be doing really well still in January. It will obviously pass the Switch during 13th/14th month tho. We will see if Switch manage to take the lead back during the year or it's second holiday.

PS4 will be enjoying the other half of it's holiday sales (the holidays don't begin on November 10th) soon, so it's a wait and see scenario.

Well the last month was quite the switcheroo for Nintendo, am I right guys?

In these years consoles have a strong starts but the regime is "slow", Wii and DS were more innovation, more games, new games... Wii and DS are on other level

Yet Switch is outselling both Wii and DS launch allinied.

It also has much more games and also better games than the Wii had year 1. Almost 3 times the games in fact.

It is important to remember that in 10 months of ps4 sales more than 3 months it was without japanese sales and 15 days without european and latin america sales. Since the sales count begins in november 15.

I don't think that would change the lead ... the bigger difference is in how the launch's align the holiday season.

I agree, but the difference would be shorter.

It's MORE important to remember that the PS4 hasn't had pre-holiday sales yet. October and the first half of November are still huge months that the PS4 is missing, compared to the relatively quiet months the Switch is now moving into.

Unless there was no supply of PS4 available for those Japan and Euro customers around their release times, the folks who wanted one got one. It makes zero difference after a couple of months. But you tried to save PS's face...

Ps4 will outsell both switch and WiiU combined

This prediction is as possible as Switch outselling PS4 and Vita combined.

This prediction was laughable at that time, and even more ridiculous nowadays .