Sony Interactive Entertainment announced it is temporarily dropping the price of the PlayStation 4 Pro and PlayStation VR headset in the US. 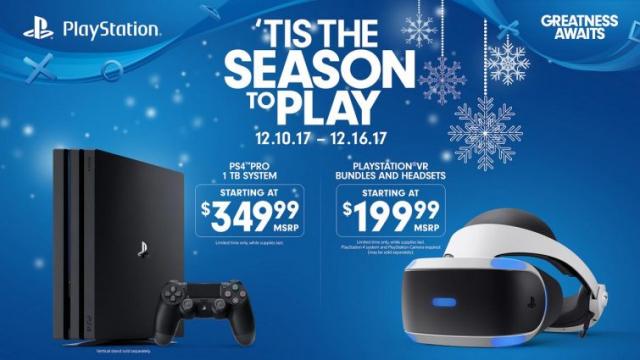 Read the complete details below:

This bundle includes a PS VR system, a PS Camera, a copy of GT Sport, and the new PS VR demo disc. The world’s first racing experience to be built from the ground up now heightens the experience further by transporting gamers straight into the driver’s seat in virtual reality. Experience thrilling one-on-one racing with select cars in the dedicated VR Drive mode in Arcade Mode.

This bundle includes a PS VR headset, a PlayStation Camera, a copy of Doom VFR and the new PS VR demo disc. DOOM VFR brings the fast-paced gameplay fans of the series love to VR. Lay waste to an army of demons as you explore and interact with new areas of the UAC facility on Mars, and Hell itself, from an entirely new perspective.

This bundle includes a PS VR system, a PS Camera, two PlayStation Move controllers, a copy of Skyrim VR and the new PS VR demo disc. Skyrim VR is perfect for longtime fans of the game who want to check out Skyrim’s epic world in virtual reality, or for the curious gamer looking to virtually dip their toes in Tamriel for the very first time.

The super-charged PS4 Pro system, with a DualShock 4 controller, is available for a limited time at an even greater value.

This bundle includes the Glacier White PS4 Pro with a 1TB HDD, matching DualShock 4 controller, a copy of Destiny 2 and a digital content voucher that includes the game’s Expansion Pass.

I don't know how Sony will be able to top this year in 2018 sales wise... Oh I remembered, with great games.

The PS4Pro deal already seem like pricecut.
And the PSVR deals seem moronic when GT deal is 199 (which is a steal for me).
Let's see what they will do for the base PS4.

This is definitely going to put some Pro’s in more people’s hands. The console sold fairly well on BF and CM without the price drop.

Not bad price for VR

oh my.....I just talked to my fiancée about PSVR being the cheapest option to play VR Games and now this bundle is $200....omg this is so tempting to buy as a Christmas gift for her now. I get paid that week too. Oh what a decision to make LOL.

That's actually a pretty good PSVR price with GTS included. Still not mass market price, but getting closer. At this point, they are carrying the VR market with Vive and Rift half-dead. That's actually worrying because it's not like PSVr is flying off the shelves. Still not doing mobile VR numbers.

Decent Pro price too. The other PSVR bundles are pricey.

I just wonder why there isn't a PS4 Slim deal. Maybe they are out of stock and will only bring it back closer to Christmas.

According to Adobe PSVR outsold PS4.

Of course it do, and that led to many debunking their analysis, but being downvoted since it have Switch winning TD, BF and CM.

I knew it...probably going to stay permanent anyway...Although I thought they’d wait until PSX to announce it.

Damn it Sony, I don't need a PSVR right now. Knock it off with sales and temptation.

If GT Sports VR was more fleshed out I would consider this. I will consider VR when its cheaper.

Now only a bundle of PSVR+PS4PRO for $500 bugs and it's time to move a shut load of (ugly) consoles.

Millions and millions of PS4 are going to be sold. The PS4 will increase its lead over the Xbox One.

When hasn’t it been?