Fantasy games typically star a collection of strong, virile heroes called upon to stop an evil force or put down an enemy rebellion. But what happens to those heroes when they're gray in the beard and long in the tooth? Such is the premise of Has-Been Heroes, a surprisingly complex and addictive rogue-like real-time strategy game from the makers of Trine. In this genre-bending title, a young would-be hero joins forces with two over-the-hill heroes to fulfill that greatest and noblest of tasks: to escort the king's twin daughters to school.

As in Frozenbyte's Trine series, Has-Been Heroes stars a troika of playable adventurers. That, however, is where the similarities end. Has-Been Heroes is a combination of several genres — rogue-like, dungeon-crawler, and RTS — that plays like the love child of Plants vs. Zombies and Darkest Dungeon. Each hero has a lane that he or she must protect from monsters who gradually move from right to left across the screen. By coordinating melee attacks and managing spells and cooldowns, players can stop the monster march in its tracks. 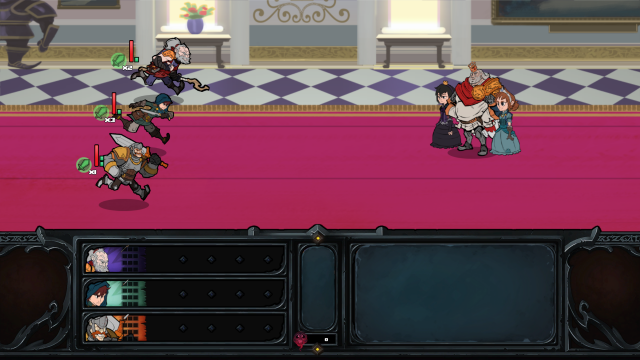 Although almost everything — including monsters, levels, spells, and items — is randomly generated in Has-Been Heroes, the game follows a predictable trajectory each time. The three heroes enter a world with a randomized map. They visit shops, find locked treasure chests, engage in battles, and, eventually, face off against the world boss. If they double back to a visited area they'll need a candle to light the way. If they want to buy a spell or buff they'll need to fight in battles to earn coins.

Each battle in the game plays out in real-time, with a catch: a pause button. At any time during the action, players can pause to catch their breath, and plan out their next moves. This is an incredibly useful, arguably essential part of the game as even early battles can prove daunting and deadly. Don't expect any continues or extra lives, either. Death is permanent in Has-Been Heroes. 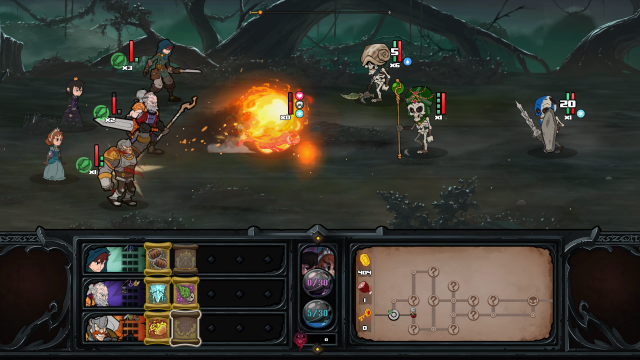 Anyone familiar with Plants vs. Zombies will understand the fighting mechanics of Frozenbyte's rogue-like instantly. The goal is to keep the marauding skeletons, ghouls, and man-eating plants from reaching each hero and depleting his or her stamina and life. To prevent death, players must coordinate their heroes' attacks, swap lanes on the fly, and use spells and buffs to first whittle down each monster's stamina and, second, drain it of life force. With dozens of randomized spells and a combat system open to interpretation, the range of fighting techniques in Has-Been Heroes is substantial.

Whether players survive long enough to experiment with different spells and strategies is the question. Has-Been Heroes is a demanding, punishing game with a steep learning curve. There's a prologue that sets up the game's basic mechanics, but as with most rogue-likes, knowledge comes from failure. 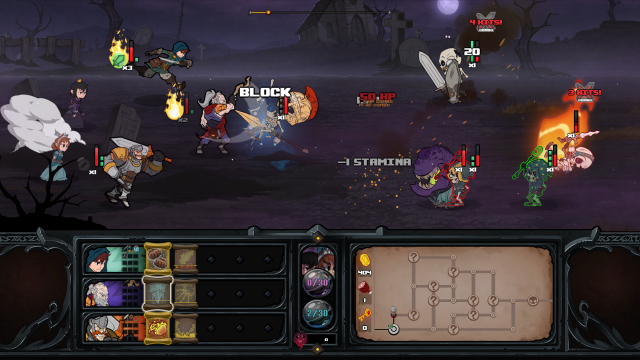 Players lucky enough to survive a run and defeat the final boss will earn one of ten endings and unlock one of several alternate heroes. Then it's back into the trenches to purchase new spells, find new enemy types, and make the perfect run. Has-Been Heroes isn't really a game you "beat." It's a game that beats you. But that's part of its perverse pleasure.

Clearly Has-Been Heroes isn't for everyone. Permanent death and randomized everything might prove too unpredictable for some. The lack of a robust story might turn off others. Players who adjust to the steep learning curve, however, will find an engaging title full of action and strategy with high replay value.

This review is based on a digital copy of Has-Been Heroes for the NS, provided by the publisher.

Psssht, "perma-death" worries only those who let their characters die!... at least that's the attitude I entered my first Fire Emblem game with, and not long later was seeking counseling for my grief. Still, I'm psyched for this one :)

The game's concept really attracts me, but sadly I can't get through the perma-death and difficulty curve of the title. Maybe if Frozenbyte adjusts the difficulty with a patch or an easy mode. What I saw in some LPs was just brutal imho.

had my eye on this but the permadeath aspect has put me off. I was hoping for something a little bit light to play in between Zelda.

Seems like a good challenge, and the art is somewhat fetching. Maybe a little too Rogue-lite for me though.