The reaction to Playstation All-Stars has been interesting to watch as it has evolved since its announcement. Many think of it as a Smash Bros. clone, chiding it for changing mechanics, while promotional video of the game has notably shown its differences, such as level 3 super moves and comboing. With a beta event occurring this weekend, it was my first chance to play this mystifying game. After playing it, I’m still confused.

The beta was an intentionally stripped down affair (only three minute free-for-all four player matches, with six available characters: Kratos, Sly Cooper, Fat Princess, Radec, Sweet Tooth, PaRappa). Controls were only shown in the brief few seconds before a match loaded, so it took a bit to learn what I was doing. The best way I can describe the gameplay is Smash Bros. meets Marvel vs Capcom. You move and jump around stages from various Sony universes, knocking about your foes. But the arenas are walled in, there’s no damage counter, and your only method of scoring points is to KO the opponent with a super move. To do that, you have to build up your meter by damaging your opponents, so comboing becomes important. After three minutes, time was up, and the results were shown. 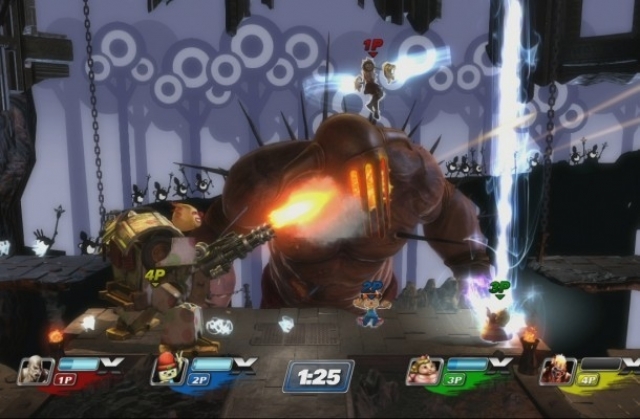 As it’s only in beta, I wasn’t surprised that there would be some issues. The camera was often zoomed out, far more than it realistically needed to be, which made every character look tiny and hard to keep track of. In one match, I lost track of my Sly Cooper because, at a distance, he looked just like another player's Sly. The combo meter bars are also different shades of blue, so it was sometimes difficult to know exactly how much meter everyone had.

There were also some annoying glitches that happened in battle. At about one minute in, Radec froze solid. I couldn’t damage him even though I kept hitting him, nor did he move at all, until the match ended. In a different match, I was killed by a super with 20 seconds to go… and never respawned. I’m not entirely sure what was going on there, but it definitely wasn’t good, and I’m hoping problems like these are gone before the full release.