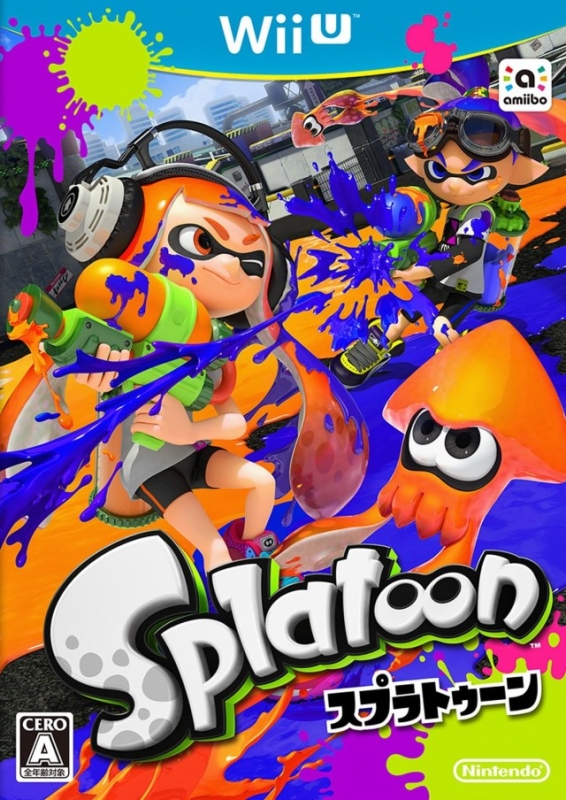 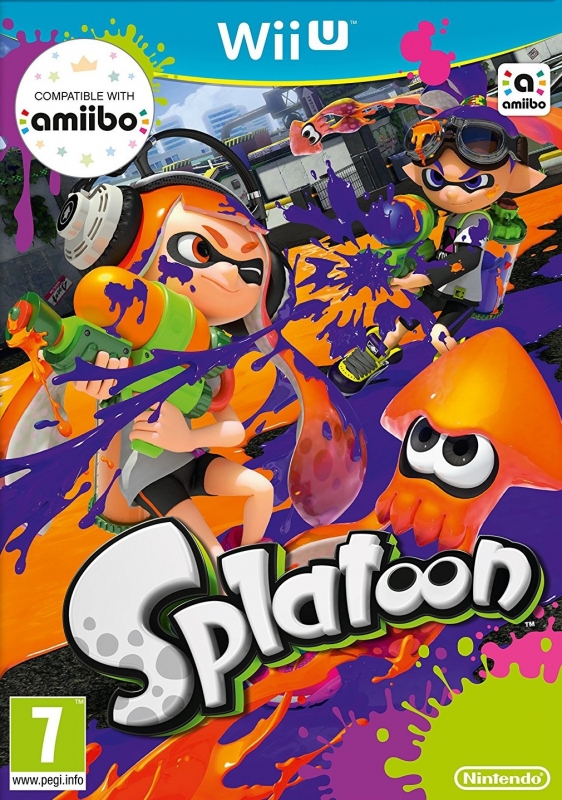 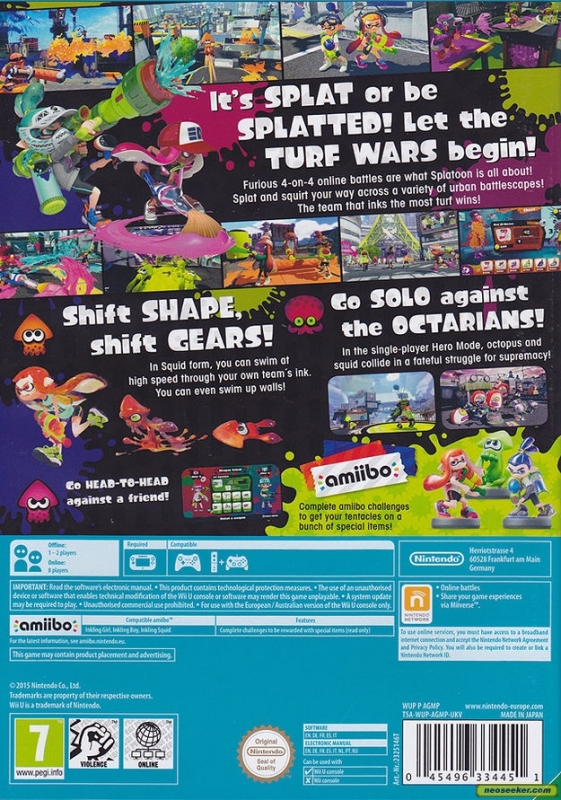 Can you ink with all the colors of the squid?

We know Nintendo for its many intellectual properties, which include critical darlings like Mario and Zelda, and cult classics like F-Zero and Mother. Nintendo could ride on the coattails of these franchises for years and sustain a profitable business model, but the firm isn’t resting on its laurels and, with Splatoon, Nintendo has entered a genre it rarely dabbles in – the competitive shooter. The vivacious artwork, fresh soundtrack, and rocking environments create a new type of shooter experience and it’s one that’s definitely worth your attention.

The crux of Splatoon's gameplay is Turf Wars, a popular sport that all of the inklings are obsessed with. Two teams of four face off in enclosed arenas with the goal of covering as much of the arena in their own ink color as possible. Inkling boys and girls can accomplish this by utilising an advanced arsenal of ink-based weaponry, which I'll cover in more detail a little later.

The obvious way to win the match is to cover the playing field in ink, but this is more challenging than it initially seems. Each team can cover the opponent's ink with their own ink color. Defeating ("Splatting") an opposing inkling causes an ink explosion benefitting the aggressor. When a defeated inkling respawns, they can use super jump to blast all the way across to the map to wherever a teammate is located, getting them right back to inking.

Inklings can't run, and their jumps are pitiful. Their main form of transportation is to turn into squid form and swim in their own ink. This means that covering the map in your goopy goodness isn’t just for points – it’s essential for quickly moving about the arena and taking down your opponents. Inklings in squid form move much faster in their own ink than they can on-foot, and they can even climb up walls and objects that have been inked. Inklings are also hard to see and shoot at while they swim under the ink, allowing you to make a surprise attack. But be careful not to get stuck in the opposing color, as you’ll be ground to a halt and be easy pickings for the enemy. Proper use of the ink on the playing field is paramount to your success.

Battle your way through the hordes of inklings online and you’ll increase your level. Higher level inklings can access more weapons and accessories in the shops. Once you’re ready for a new challenge, you can enter Ranked mode, which ups the ante.

In Ranked play, you’ll face off in a game of Splat Zones, where each team tries to unleash enough ink into a splat zone to take control of it. The controlling team must fend off the opposing team or it will lose control of the splat zone, so it's akin to the Hardpoint mode found in games like Call of Duty and Titanfall, but with more vibrant color and that special Splatoon style.

My experience with the online play was great, as I noticed only minor internet speed issues in a couple of matches that I played. However, online play was only available to those with review access and so it remains to be seen how well Nintendo's servers handle the onslaught of players from all around the globe on release day.

Splatoon's three main weapon types are the Shooter, Charger, and Roller. Shooters do exactly what you'd expect: shoot ink forward and onto whatever floor or wall they hit. The basic weapon in this category is the Splattershot - a classic ink gun that has medium-ranged abilities. Other weapons include the quick, short-ranged Aerospray MG, and the Blaster, which fires big bullets that explode and leave a mess of ink everywhere. This class of weapon is the simplest to use effectively and is great for people who want to cover turf and fight other inklings.

Chargers are a combination of charging weapons and sniper rifles. They require you to hold down the fire button to charge and allow you to target players from a distance. The Splat Charger requires a quick charge, and then fires straight in front of you, leaving ink on the ground in its wake. The E-Liter 3K requires more charge time but can be fired an even longer distance than the basic Splat Charger. Other chargers include features such as a scope, which makes it easier to target enemy inklings. Charger class weapons are focused on taking out opponents from long range, but are less effective at racking up turf coverage.

Rollers are giant paint rollers that can be used to quickly cover the ground in swaths of ink. The Splat Roller is the basic roller, which covers the ground in front of it at a relatively brisk pace. Other rollers change the area and speed of the rolling, such as the Dynamo Roller, which rolls slower than the Splat Roller but covers more area. Rollers are great for covering area in turf wars and work well for players who are having difficulty with ink gun combat, but they cannot climb up walls, which means they can't cover the entire field. They're not defenseless, though, as they can roll over any unsuspecting inklings, and they can splash ink which will damage nearby foes.

Weapons can be purchased in the weapons shop at the hub world, and each weapon comes with its own Sub Weapon and Special Weapon. Sub Weapons include Color Bombs, which act as colorful grenades that explode, covering a wide area with ink and greatly injuring any nearby foes. Special weapons can be powerful ink launchers like the Inkzooka, or can be more support-oriented, like the Bubbler, which covers you in a protective shield, and can also be shared with your teammates by approaching them. As you play, you will unlock more weapon combinations and should soon find the ideal weapon set that fits your playstyle.

It’s not just weapons that you can collect – Splatoon also has gear in the form of headwear, clothing, and footwear. These accessories will not only make you the most stylish inkling in Inkopolis, they’ll also boost your abilities. Some of the many customization options include boosted swimming speed, increased length of special attacks, and larger ink tanks. There are also a number of duds you can buy from the shops.

Other players’ inklings will appear in the hub world, and if you like what they’re wearing, you can order that piece of equipment from Spyke the sea urchin (though the boosts will be different than those you see on the other player). Remember, it’s not all about being stylish out there; you want your gear to benefit how you play as well.

If you’re more interested in local multiplayer on the couch then you may be disappointed. Splatoon doesn’t feature any Turf Wars or Splat Zones local play, but instead has a 1-on-1 mode called Battle Dojo, with one player using the GamePad and another using the TV with a Pro controller, Classic Controller, or Classic Controller pro. Both players complete to shoot down numerous balloons floating around the stage, with the first to 30 points being declared the winner.

Since the other game modes in Splatoon require use of the GamePad, it’s understandable that Nintendo went a different direction with the local multiplayer mode. However, it can’t be denied that the Battle Dojo just isn’t as compelling as standard Splatoon fare.

For times when you want to play alone, Splatoon also offers a single player mode called Octo Valley. In Octo Valley you charge into the base of the Octarians to free the Zapfish from their dastardly clutches. This mode creatively uses the game’s control scheme and squid form to create interesting challenges. Spray sponges with ink to enlarge them and make progress, and jump from platform to platform by dash-jumping as a squid in ink. You’ll also climb up walls, but have to do it quickly as invincible cleaning enemies clear off your ink path and strand you.

The campaign isn’t very long (about 4-6 hours), but it is a fun diversion from Splatoon’s multiplayer fare and doesn’t overstay its welcome. You can also play Squid Jump, an arcade-style game where you charge up your squid’s jump, then release it to fly up, with the goal being to jump from platform to platform and reach the end of each level. Additional games can be unlocked by completing the challenge levels unlocked by scanning in one of the three Splatoon amiibo.

That’s right, Splatoon has amiibo support, and its own set of three amiibo (Inkling Boy, Inkling Girl and Squid - see above). Scanning one into the game unlocks 20 special challenge levels that reward you with exclusive gear and weaponry that cannot otherwise be acquired in the game. Many of these challenge levels last as long as a level in the single player campaign, so it’s not as if you’re getting mere cosmetic enhancements for purchasing the amiibo. Each amiibo costs $12.99 USD (and $34.99 for the Splatoon 3-pack).

While all of the gameplay mode in Splatoon have plenty to offer, it may not be enough in the eyes of some gamers. Players who lose interest in the core concepts of Splatoon are unlikely to play for long, as the game is mainly fixated on its two online multiplayer modes. This is a particularly important issue for North American players, as the game is priced at the standard $60 USD in the region, but as low as about the equivalent of $35 USD in some European countries. Such a price disparity may affect your purchasing decision.

Splatoon is an impressive game that takes the standard conventions of the shooter genre and tosses its own fresh coat of paint on it. The fun and wacky excitement of inkling-turned-squid ink combat sounds like a bizarre concept, but it works so well that it entertains for hours on end. Splatoon may not be everyone’s favorite fish in the sea, but for those looking for a fun multiplayer game on Wii U, this is a great catch.

This review is based on a digital copy of Splatoon for the WiiU, provided by the publisher.