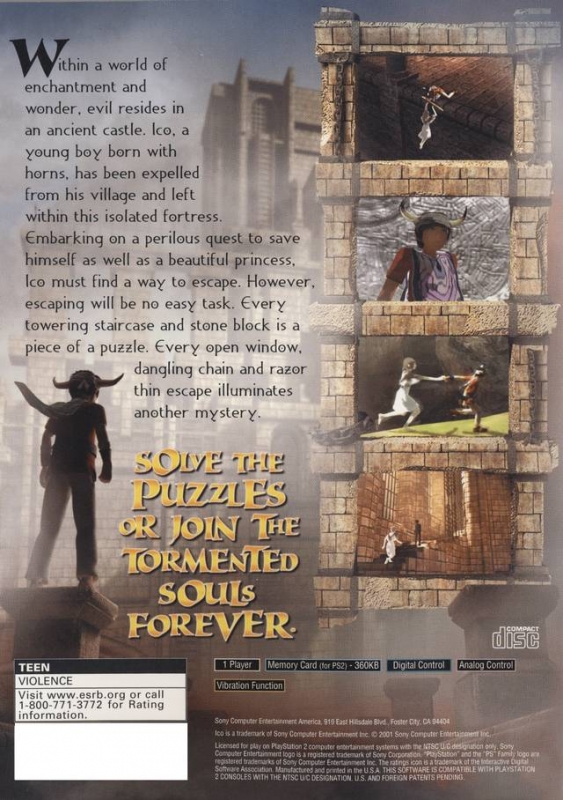 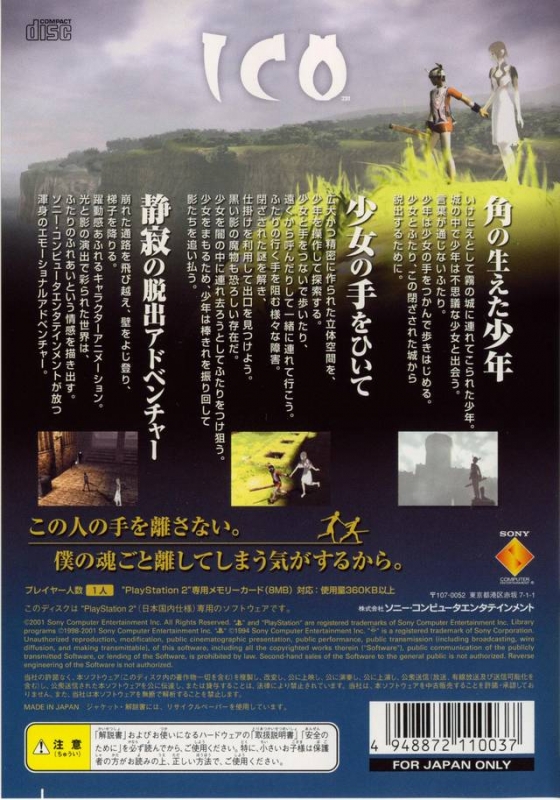 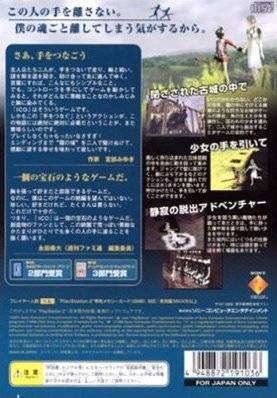 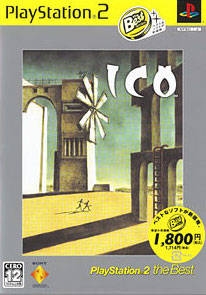 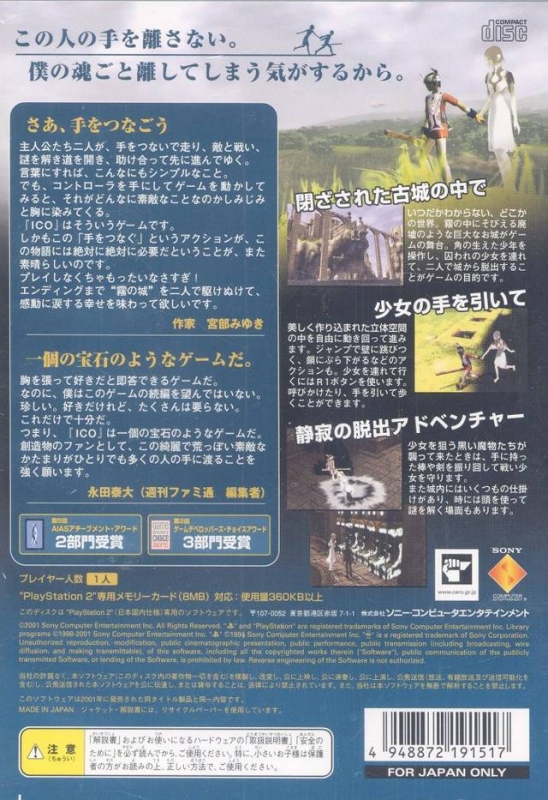 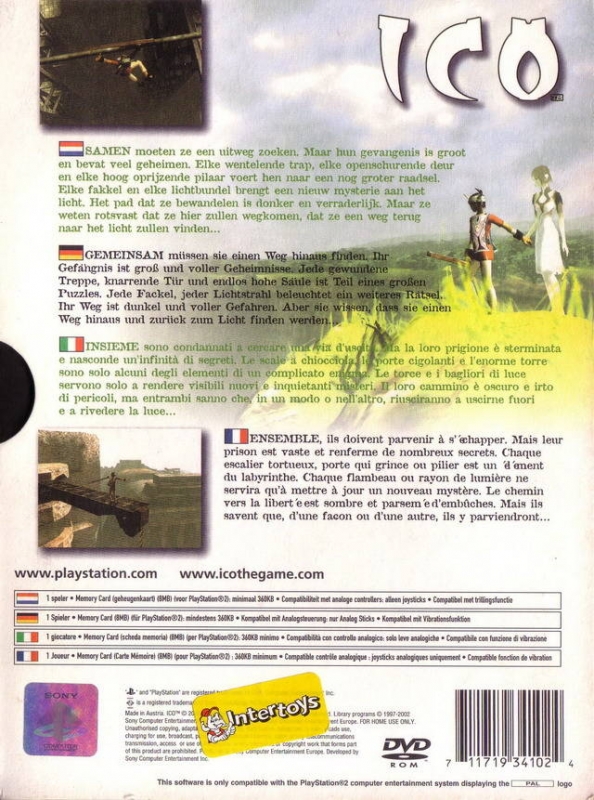 "Ico is certainly worth a play through, even now. Few games match its atmosphere and beauty. The way the tale unravels from beginning to end is nothing short of greatness." Wookaroo

Videogames as art is a debate that has been brought up many times, with varying results. Some say that bringing artistry into video games can deny their primary function as entertainment, while others argue that video games must evolve as an art form to be taken more seriously as a medium in general. Ico often stands at the forefront of this debate, and is a great example of how an artistically mindful design does not preclude a game from being extremely fun as well.

In Ico you play as the game’s namesake: a horned boy who is captured by a group of knights and taken to a seemingly abandoned castle. They then toss you into a sarcophagus and leave you to die. After you escape you begin exploring the castle and quickly happen upon a captured girl named Yorda, who you speaks in a totally different language to Ico. You quickly decide to break Yorda out of her cage and escape from the castle with her. This is where the game really begins. Throughout the story you will discover the secret of Yorda and why she is in the castle, as well as the fate of the cursed children who have come before you. The story isn’t a complicated one by any means, but there are definitely some twists and some very emotional moments that make this one of my favorite stories in gaming.

Ico’s gameplay is a mix between environmental puzzles and platforming, all with Yorda in tow. There is no introduction to the mechanics of the game and noone blatantly telling you what you need to do to advance. Instead you are left to your own devices to figure out how to accomplish every task set before you, with your only clues being how the camera pans to show you your next objective. The buttons are fully customizable and you can set any of the face or trigger buttons to any of the possible actions that Ico can take. I personally set X as my jump button, Square as my attack, Triangle as the action button, and Circle as the button for releasing your grip from a ledge. Perhaps the most important button was set to R1, and this button is to call Yorda to your side when she is away from you, and to grab and hold her hand when she is standing next to you. This button is also used to help Yorda up ledges that she can’t climb up herself, as well as helping her jump across gaps by grabbing onto your hand on the other side.

Your goal at any given time is to get out of the castle, which usually means progressing to the next area of said castle using a combination of platforming and environment interaction. Every once in a while during your travels Yorda will come under attack by mysterious black shadows that try to drag her into the depths. If they succeed it is game over, so you have to fight them off and destroy them before they can get to her. These fights can be extremely hectic and add a layer of excitement to the game as you try and fend off multiple foes and help Yorda escape whenever one gets a hold of her. This also means that you cannot leave Yorda alone for an extended amount of time, or she will be attacked while you are not around to save her. This turns the game into a kind of escort quest, but surprisingly this doesn’t mean that the game is bad.

The issues with escort sequences in gaming in general are twofold. First, you can’t directly control your escort, so they are bound to do something stupid and get themselves killed. Second, you barely know your escort and really couldn’t care less whether or not they get killed in the first place. The first issue is dealt with by giving Ico the ability to call Yorda to his side and to hold hands with her once you are next to each other. Holding hands allows you to lead Ico around directly. If you don’t call Yorda to you she will dutifully stand wherever you leave her, unless something scary happens and she has to run away. These controls over her movement as well as the general lack of hazards in the game mean it is well nigh impossible for Yorda to wander her way into death, which puts all of the blame for any fatality on her part squarely on your shoulders.

The second issue is dealt with by making the entire game an escort mission. You come to know Yorda and her own circumstances, which helps to make you care about whether or not she lives or dies. By the end of the game you will be hard pressed not to have some place in your heart for this mysterious girl. The relationship between Yorda and Ico has been lauded by some as one of the greatest romances in gaming. I personally did not see the romantic connection between these two people in such incredibly different situations and obviously different ages, but it is easy to see that a deep bond forms between them. As events unfold you will see the depths of their trust and feelings for each other that could only be acquired through such an epic quest as this.

The graphics in Ico were some of the most technically impressive on the Playstation 2 in their time, and they are still quite beautiful even by today’s standards. The focus of the graphics, less on realism and more on creating artistry, helps to make a beautiful game that really immerses you in the story. The environments and character animations were magnificent. There are a few errant moments where leading Yorda around will force her arm into a strange orientation that looks like you probably popped her shoulder out of its socket, but that’s a small complaint for an otherwise beautiful game.

Sound design is all about making the player feel like they are really in the game’s world and are experiencing what the character experiences, and Ico does this very well. The ambient noises and sound effects are the only aural companions you have on your journey, and this helps to bring you in and make you feel like you are really exploring an abandoned castle with a lovely and mostly mute girl in toe. There are only two songs throughout the title: one during the introduction to the game, and one during the ending. Both of these are fantastic songs that fit the mood of the scene they are connected to perfectly and are worthy of an addition on anyone’s playlist.

I would also like to mention the fantastic use of controller vibration in Ico. Whenever you are leading Yorda by the hand and trying to run faster than she can, you will feel a tug on the controller every time you pull her arm. The vibration is used to convey a sense of touch between yourself and Yorda, and whenever you are doing something strenuous such as running and pulling her away from danger, or pulling her up a ledge she can’t manage by yourself, you will feel it through the controller. It is a fantastic idea and one of the best uses of controller vibration in any game I have ever played.

The gameplay in Ico is very well done, but can be extremely confusing at times. The idea that Ico does not want to lead you by the hand through the game is great and really helps to never break the immersion, but this can also lead to some extremely confusing moments where you can’t for the life of you figure out what you are meant to do to continue on in the game. Some would say that this is the case for any puzzle game with a decent amount of challenge, but it leads to some very frustrating moments and I think this is a definite downside to the design decisions made for the title. There are also probably not enough check points and save points in the game for my liking, and sometimes a simple mistake will lose you a decent chunk of time. My only other issue is that Yorda can be extremely slow to do some things. One action in particular is climbing up and down ladders. Yorda is extremely meticulous on ladders and has to take every step slowly and delicately. This fits her character perfectly, but can be annoying when you have called her up a thirty rung ladder and decide to go get a drink since she’s going to take at least a full 30 seconds to make it up.

Value is easily Ico’s worst feature. I played through the title in five and a half hours on my first time through, and would most definitely take far less time if I ever decided to play it through again. There are no collectibles and no different difficulty levels to lead one to replay the game. In the end though, the test of a game’s value is whether or not you would recommend that someone purchase it, and I most definitely recommend it for everyone reading. Ico is an experience in gaming that every gamer should try out for themselves, and is so unique that it would be a crime to let this one pass you by. Even with all that said, however, it can only bring Ico up from a terrible value, to a slightly below average one.

Ico is a strange game that sounds fairly awful when you hear the concept on paper. The idea of a title where the main goal is to escort a defenseless young girl through a castle sounds like a nightmare of gaming waiting to happen, but that couldn’t be farther from the truth. The total commitment to immersion, beautiful graphics, and innovative controls make this game a true gem, but the short time for a playthrough, total lack of any collectibles or increased difficulty to increase replay value, and sometimes frustrating puzzles keep this game from being among the top tier of gaming. Nonetheless, Ico is a gem of a game that I recommend to anyone.