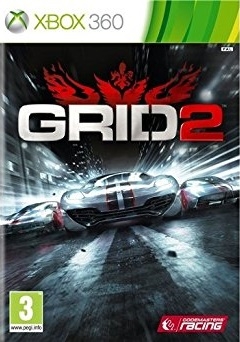 After concluding several reviews of Codies racing games with a plea for a sequel to GRID – by far and away my favourite racing game of this generation – I was beginning to feel as if I had a second The last Guardian situation on my hands. Four F1 games and three DiRT games later, finally, finally Codemasters have deigned to acknowledge the existence of the GRID series.

But perhaps I should be grateful that they waited so long. So many series’ reputations have turned to ashes in my mind’s eye thanks to countless, seemingly never-ending sequels and spin-offs. An almost equal number of series have been equally tarnished this generation not because of annual sequels, but because the one entry that has been produced ended up disappointing at best, a disgrace to the memory of its predecessor(s) at worst. GRID 2 is certainly neither of these, but nor is it everything I hoped for.

If you’ve been following the development of GRID 2 to even a very small extent, you’ll most likely be aware that the most controversial aspect of the game is the removal of the internal vehicle camera angle (i.e. cockpit view). No more ultra-detailed interiors for us GRID fans, alas. All of the other angles are present and accounted for, however: first person, bonnet, close-up third person and distant third person. As a fan primarily of third person views in racing games this change affects me little; whilst I am able to appreciate the lovingly detailed interiors on offer in many a racing game, including the original GRID, after a while I always go back to my trusty third person perspective. That is not, however, to diminish the importance of its removal. I certainly noticed its absence, and the community as a whole leapt for the pitchforks when Codies made the announcement of its removal. But it’s gone, and that’s that. The game is worse for it, but not mortally wounded.

Among the other changes that will receive less-than-warm reception are the removal of destruction derby races (it looks like the creation of the Showdown spin-off series has resulted in their wholesale removal from the GRID franchise, which really is a shame) and the addition of ‘LiveRoutes’, which basically means the tracks in certain races will alter from lap to lap. LiveRoutes is a double-edged sword really. On the one hand, yes, it’s worth praising the attempt at adding variety and unpredictability to races, but on the other hand racing games are in a manner of speaking about the pursuit of perfection: you learn a track, you learn how to handle your car, you perfect the execution of corners and breaking. LiveRoutes to some extent prevents this, forcing you to be more cautious as you approach turns. 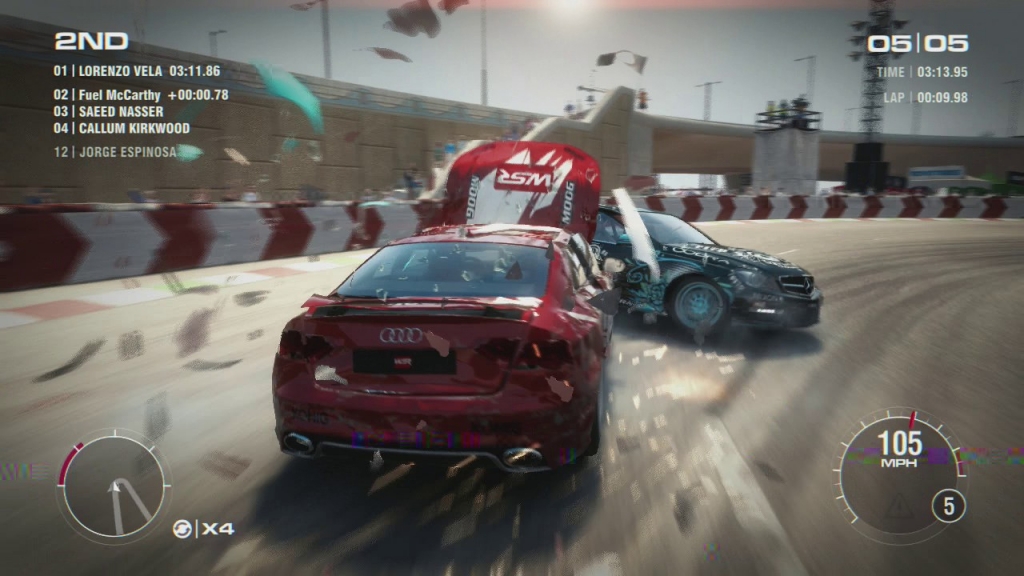 What I do, however, love about GRID 2 is how it has doubled down on the most successful elements of the original GRID. Damage modelling and physics remain a focal point of the racing experience, and both have been improved substantially. It’s as thrilling and satisfying as ever to head into a packed first corner, attempting to dodge the resulting carnage. Your car becomes battered and bruised in these exchanges as you race around the track. Bits fall off, the rubber on tires degrades, the doors swing open and come away, your bonnet rips off and flies into the air. It’s a perverse thrill to be ahead of the pack in what is almost a heap of scrap metal, dragging the remains of your sports car around the track like a wounded animal that’s leaving a trail of debris and sparks in its wake as it attempts to hold off its pursuers.

Graphically, you can always expect a treat from mainline Codies racing games. GRID is no different in this respect. Not only are the details mentioned in the paragraph above a joy to behold, but the tracks are also highly impressive, as are the car models themselves. The original GRID was often criticised for its yellow-ish hue, so it’s good that this has been removed for GRID 2. Slight pixilation, crowds which lack detail, and background buildings with middling textures are the giveaways that this is most definitely a 7th generation game, but it’s still a very pretty one even with a new generation of graphics hot on its heels.

A brief mention of the sound design: the music which plays over the menu screens is delightful and the roar of the cars on the racing track does a decent job of conveying a sense of high octane atmosphere. 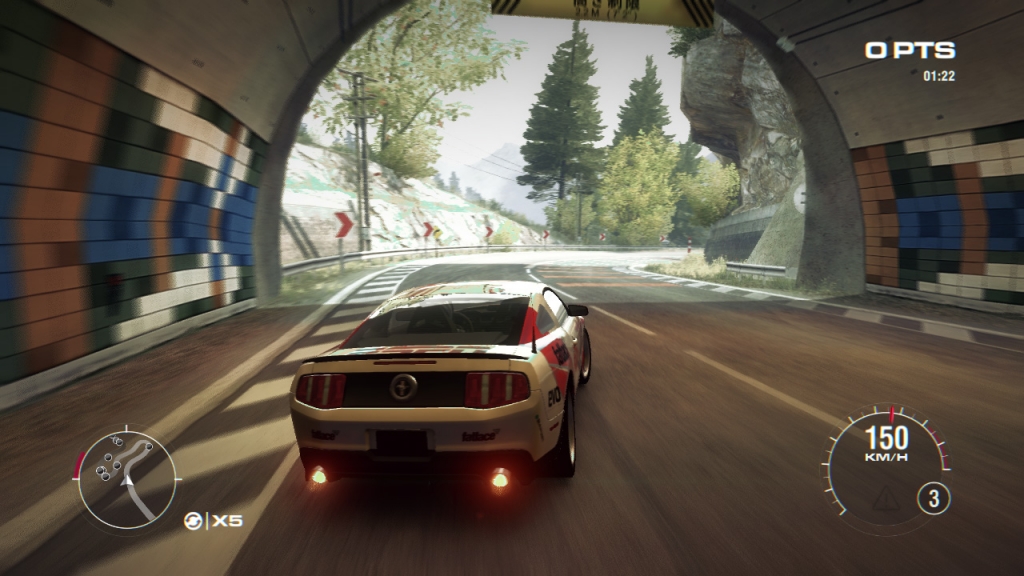 The single player campaign is actually a story of sorts. It charts the rise to prominence of a brand new form of motor sport and you are that sport’s star driving personality. It reminds me a little of the story elements that were forced into Shift 2, and yes, it’s just as awkward and unnecessary in GRID 2. The one aspect of this that I do appreciate is the fact that your garage, which acts as a hub for all of the events in the game, upgrades as you advance through the campaign.

If, like me, you’re not particularly keen on a structured storyline showing up in your racing game(s) it’s easy to ignore these superfluous distractions and just get stuck in to the meat of the game: the gameplay. The handling will feel instantly familiar to any GRID or DiRT gamer; the sweet spot between simulation and arcade that makes for pure enjoyment.

There are a number of race types, including standard races, elimination races, a revamped version of time trials, drift events, touge, and so on. They’re all standard race types – nothing especially innovative is thrown into the mix – but they help add an extra layer of variety that keeps the single player element feeling fresh throughout.

Simplification of the rewind system is welcome, but the inability to pinpoint the precise moment you wish to flash back to is not. Similarly, it’s always great to have the option to alter the damage options, change sponsors and design your vehicle, but where are the options to tweak and upgrade your car’s settings? This is not something I usually spend much time playing around with in racing games, but there are a lot of racing fans for whom these features are a core part of the experience. The good news for such fans is that the multiplayer aspect of the game does allow you to upgrade your cars, but that makes its absence from the single player even more bemusing.

Also why structure the single player campaign in such a way that if you wish to, for example, try out the European circuits, you will either have to complete each of the American events first or lose access to those initial American events? Yes, in the real world of racing you move from locale to locale, which is why it makes perfect sense in Codemasters’ F1 series of games, but in GRID I want to be given the freedom to come back to events I chose to skip over at the start and flip back and forth between continents.

Multiplayer is a little bit more complex this time around and introduces some new features (including support for Codemasters’ RaceNet service, which generates weekly challenges, tracks your stats and allows you to compete asynchronously with friends). While you can take part in traditional multiplayer races, you can also complete campaign-style global objectives. Indeed, while an RPG-esque leveling up system has been a persistent feature in Codies racers for some time now, never has it been as important as it is in GRID 2, because for the first time it gives you access to funds with which to purchase more vehicles and also to upgrade them, which, weirdly enough, actually makes the multiplayer component a superior campaign-style experience to the single player.

Quibble as I might about certain design decisions, I do still very much enjoy playing GRID 2. The core racing experience and the heart and soul of what made GRID my favourite racing game of the generation has survived the changes relatively unscathed. GRID 2 doesn’t quite live up to the legacy of its predecessor and definitely doesn’t surpass it, but it is certainly great fun regardless.


This review is based on an Xbox 360 copy of GRID 2, provided by the publisher. The PlayStation 3 version of the game was also play tested.