Tales of Symphonia: Ratatosk no Kishi

Tales of Symphonia: Dawn of the New World (Wii) 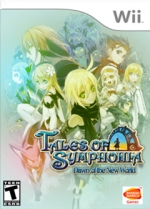 Review: Tales of Symphonia: Dawn of the New World (Wii)

Another few weeks, another JRPG review. How does the Tales sequel match up to the original? Well you'll have to ask someone else, I've only played this one.

The story of ToS: DotNW revolves around Emil, a young boy who lives with his uncle and aunt after the death of his parents. He soon meets Marta and Tenebrae and learns about their mission to save the world. It seems that the world’s climate has gone into complete disarray after the conclusion of the first Tales of Symphonia. Marta and Tenebrae are on a journey to fix this situation by awakening Ratatosk and hatching all of his centurions. This leads them to a lot of the same areas that Lloyd and the rest of the crew from Tales of Symphonia visited in the first game, which in turn leads to a number of twists and turns, and before you know it you’ll be fighting the final battle for the world’s survival. This is all pretty standard fare for a JRPG, and comes with a good number of cringe worthy moments when the game is being serious. The best saving grace of the game’s story is the optional skits that you can listen to. While walking around you’ll be prompted at random to press the “C” button, which will lead to a random conversation between the main characters that are currently traveling with you. You’ll be treated to talking heads whose conversations are actually very funny at times. These skits made me grow to appreciate Tenebrae, whose participation in these skits may have single handedly made them enjoyable in many cases. Unfortunately not all of these skits are meant to be funny, and about half of them will lead to the same cringe-worthy attempt at seriousness that is rife throughout the main storyline.

Most of the time youl'll be running around talking to people or searching for your next objective. During exploration you run using the analog stick on the Nunchuck, or you can point at the screen with the Wiimote and hold the “B” button to move your character to wherever you point. You open treasure chests and begin any other action with the “A” button on the Wiimote. The last important function during exploration is a ring which can emit fire or other elements depending on the dungeon you are in. This is used for many of the game’s puzzles and can also be used on enemies with the same element to stun them for a brief amount of time. Enemies are directly visible when exploring and you can choose to touch them to begin combat or avoid them. If you initiate battle with an enemy while they are looking away from you they will be stunned for roughly 3 seconds at the beginning of the battle, and vice versa if the enemy happens to catch you from behind instead.

Once in battle the controls change to a 2d fighter type of experience. You move back and forth with the analog stick of the Nunchuck and do your basic attacks with the “A” button. You can do different attacks by holding different directions on the Nunchuck while you attack. By pressing and holding “Z” you can block when standing still and also break the two dimensional constraints and run around the battle field to position yourself wherever necessary. When running with the “Z” button it’s important to remember that you cannot attack, and any hit the enemy lands on you will be a critical, so it's a good idea to only use it as much as necessary and then quickly get back into the fight. The “B” button is used for specials, which can be assigned to four different positions of the analog stick (neutral, up, down, and to the side), and the “minus” button on the Wiimote switches your current target. This can be frustrating, as sometimes the minus button refuses to pick the target you actually want, and so you will find yourself switching between two enemies over and over again without ever getting to the one who is trying (and succeeding thanks to the faulty toggling between targets) to cast a heal. I have since been informed that if you hold down the minus button then you can choose specifically which target, but unfortunately the game never felt kind enough to inform me of that fact (a lot like the weird button sequence you need to press to skip cut scenes, which I'm still trying to nail down). Commonly battles will play out fairly simply, with you smashing the “A” button 3-6 times depending on the skills you’ve acquired and then hitting the special of your choice. There are times you will actually have to pay attention and break from your constant attacking, like when an enemy has decided to pulverize your healer, or is powering up a large attack that you need to get out of the blast radius of, but these are the exceptions and not the rule.

During battles you have the ability to control any of the human characters in your party. You can switch who you control by going to the pause menu and then pressing “C”. I mention that you can only control the human characters, because you also have the ability to sign on any monster that you defeat to your team. Most of the monsters stay in reserve, and you can have 4 readily available to switch into your team. Whenever one of these monsters levels you can choose to cook them a snack, which will increase their stats and at certain times will result in the monster evolving to a new form. This is a nice system which allows for a lot of customization in how you put together your team, but I do have a couple complaints on its implementation. The first is that there is no background information available on the monsters; all you get is a name and an appearance which takes a bit of the fun out of gaining new monsters. The second issue is that the evolutions of any given character are on a loop, and when you get to their “final” form, the next evolution will send them right back to the beginning. Evolving still has a point, since your monster maintains 20% of their original stats whenever they evolve, but it takes a bit of the fun out of evolving once you’ve gone through the entire loop and already know what you will get. There are special evolutions that you can get to by equipping the correct statue on to the given monster, but I never took the time to worry about it and got through the game just fine so it is not necessary for completion.

When battles are finished you gain experience, which is distributed automatically to Marta and Emil, as well as the 4 monsters that are not in reserve. Any human characters you have that are from the last game have a set level which changes after certain events, so any experience you gain will not affect them. You also get Grade which is used to give yourself perks at the end of the game when you start a second playthrough, and a certain amount of Gald (the currency in the game). As your characters level, they will gain skills and artes. Artes are abilities that your character can use in battle with the “B” button, while skills are usually passive benefits that you toggle on and off in the main menu.

The technical presentation of ToS: DotNW is respectable. The menus work fine and there is only slowdown in a few instances. I did catch a random bug with one of the skits, where the subtitles and character pictures did not change like they normally do throughout the skit, but I only ever saw that happen once throughout my playthrough.

The visuals in ToS: DotnW are fairly typical of JRPGs. The only real issue is that the facial features of all the character models are painted onto the polygon of their head. This gives the characters a very dated look. There is a cut scene in anime style that serves as the intro to the game that looks fairly nice, but this style is never used again. It was unfortunate that they decided to use the in-game engine for all of the scenes in the game, since the intro proved that the characters could look better if time were put into them. The visual style may have been chosen to maintain the style of the original title, but unfortunately this effort was wasted on me since I have not played the original.

The audio presentation of the game is a mixed bag. The voiceovers are fairly enjoyable,with only a few of them grating on my nerves (unfortunately one of these was the main character, but oh well). The music, on the other hand, was akin to what I would expect from a fantasy elevator. It was noticeably repetitive and at times utterly ridiculous. One moment that comes to mind was when a certain “badass” character was introduced and a blazing guitar riff was thrown into the mix to set the mood. This was incredibly cheesy and a brilliant move if they intended to make a joke of it, but something left me with the idea that this was not their intent.

The gameplay of the Tales titles are often lauded as being some of the best in the genre, and I can definitely see how some might think this, as the battle system was extremely fast paced and simplistic enough for people to easily get into. This also leads to the ease with which a friend can jump in and take over one of the other human characters for you without much coaching, which is a nice addition for a JRPG. Unfortunately there are definite camera issues. If you attempt to play with a friend and don’t want to stay in the same place all of the time, the camera will just pick one of you to follow and the other will simply have to try and guess at what is going on. There is also a certain shallowness to the battle system that can be disappointing over time, as you fight battle upon battle without much (if any) strategic thought and just let the rhythm of your combo attacks guide you.

My first playthrough of ToS: DotNW clocked in at around 32 hours. This is a decent amount of time, and I will admit that I did not partake in every single side quest available, so I could have definitely lengthened the time it took to finish. There is also a lot of incentive to play through the game twice or more because of the grade system, and I can foresee people who really love the game getting 2 to 3 playthroughs out of it.

I will admit that I probably sounded very harsh throughout this review, but I want to reassure anyone reading this that the second Tales of Symphonia is still a competent game that can be quite enjoyable. The skits are funny, Tenebrae is at times hilarious, and anyone who loves the game will definitely get multiple playthroughs, making for very good value. On the other side, the story often falls flat on its face when trying to be serious, the visuals are uninspired, and the main character is possibly the whiniest thing to have ever been born.