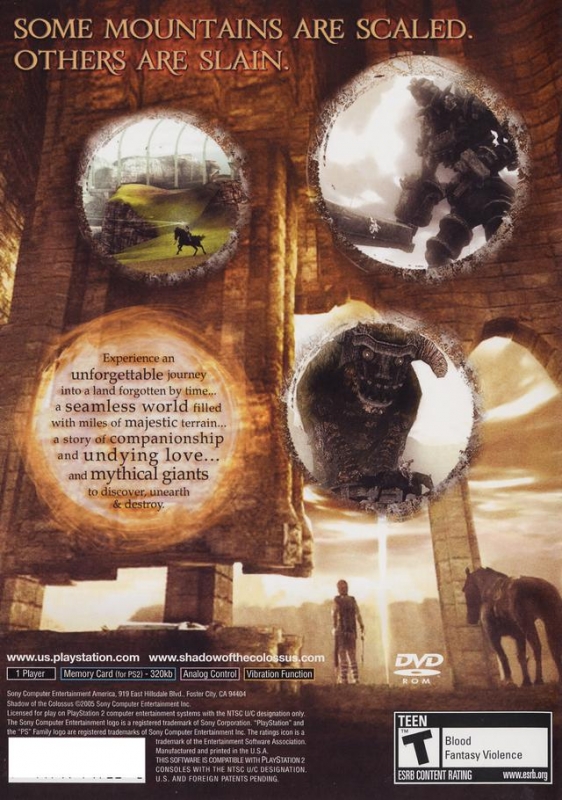 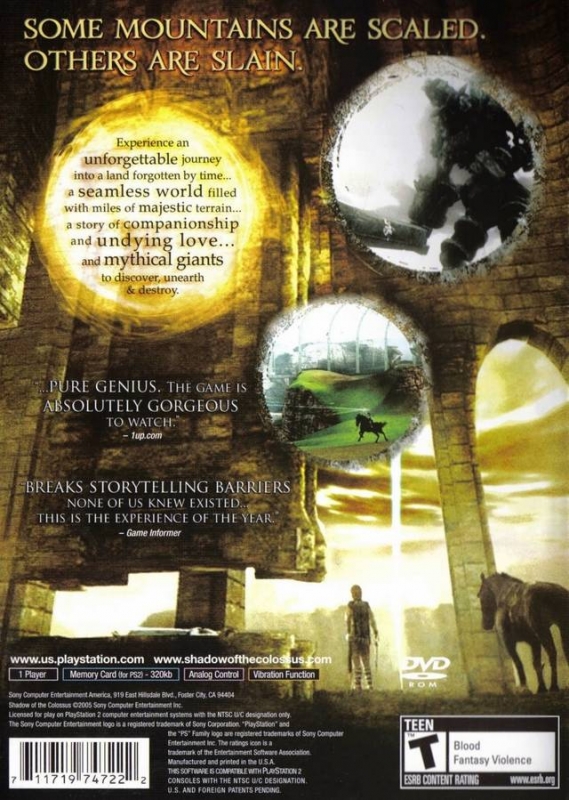 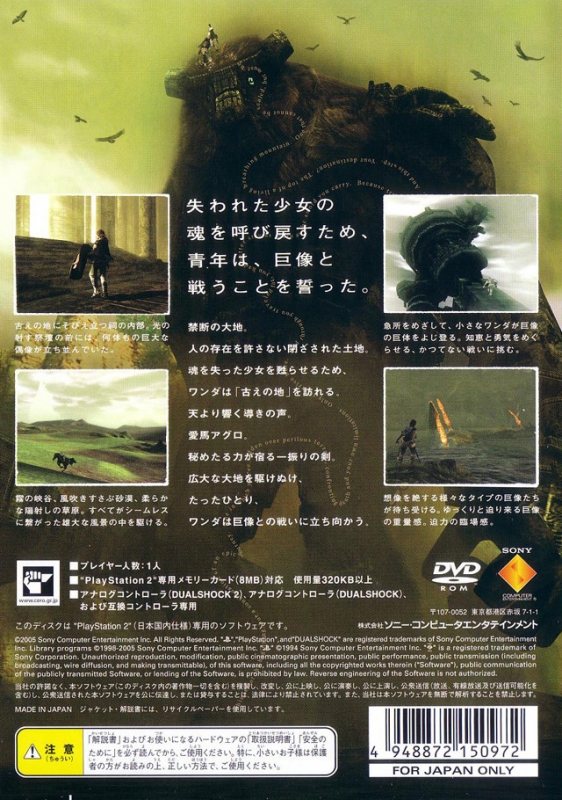 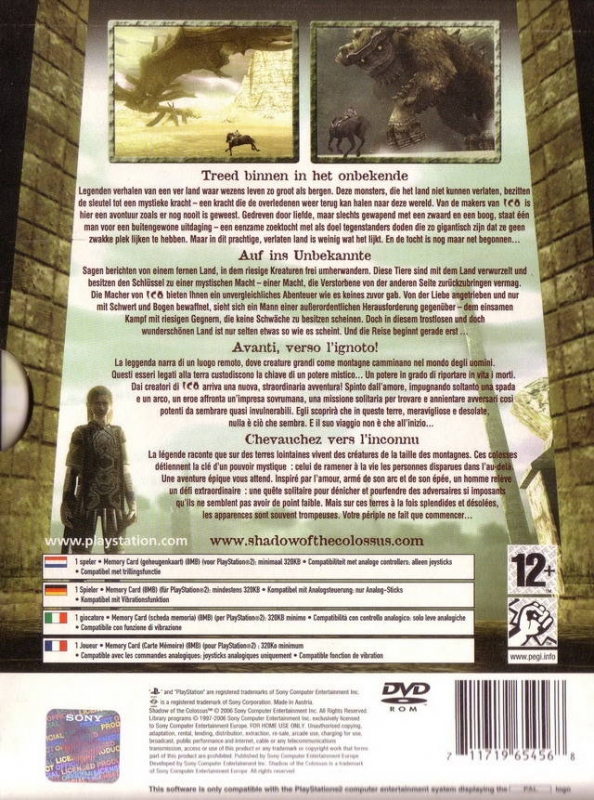 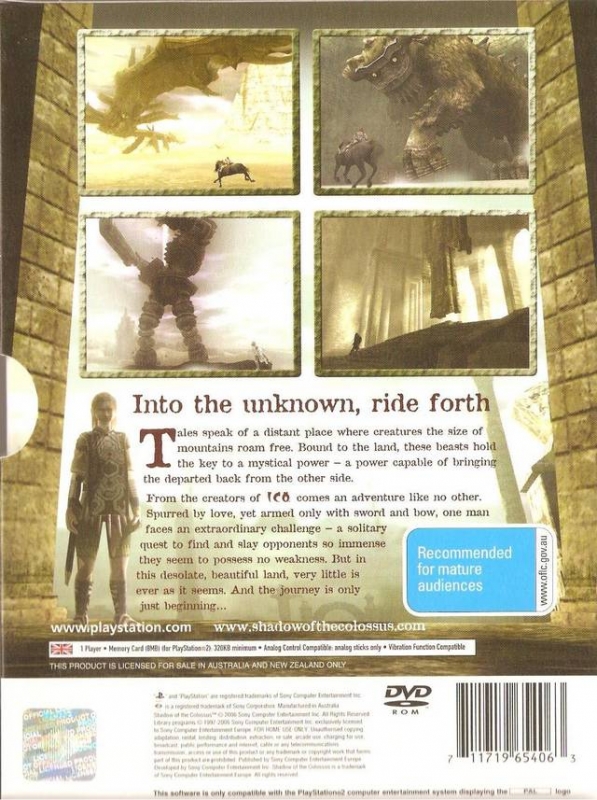 Shadow of the Colossus (PS2)

The Land of the Giants Awaits...

Not being a PS2 owner I obviously missed out on a wealth of exclusive titles, and so when this generation came along and I bought myself a PS3 at the UK launch I set about compiling a list of must-have titles from the PS2 library to play on my backwards compatible PS3. Shadow of the Colossus was right at the top of that list. What struck me about the title, when reading reviews, watching gameplay clips and looking at screenshots, was just the sheer uniqueness of the game. Everything about it sounded epic - the orchestral score, the scale of the world around you, the eschewing of constant combat, and most of all the sheer majestic beauty of the beasts themselves. Your enemies - the 16 colossi - are imbued with a sense of personality, so for once you’re tasked with killing creatures that are likable and charming, particularly the furry ones. I actually regret having to kill them, and that’s a sign of a good, immersive action game.

From the start you’re quickly tasked with searching the world around you for 16 colossi, one at a time and in a specific order, in order to restore life to your female companion. A good portion of the game is spent riding on your horse (Agro), searching for the general location of each colossus using the beam of light that’s reflected off your sword. You hold the sword up to the sun and move it around until the beam of light narrows and points in the general direction of the colossus. The closer you get, the more often you’ll hold your sword up to the light in order to pinpoint the correct location. And the further you progress through the game the more difficult it is to actually find each colossus, sometimes frustratingly so. Each one seems to be further away than the last, buried more deeply in the world and harder to find. In that sense it really is an action/adventure game.

When you’ve found the general location of the colossus, the game often introduces long sequences of puzzles and platforming elements. In order to trigger the colossus, or find its precise hiding place, you might have to scale huge temple ruins or walls. This will usually involve the platforming staples or running, jumping, grabbing and shimmying across ledges. The controls are quite simplistic and although it can be challenging at times to perform leaps while hanging on to a ledge, it’s never made too difficult. The effect is often to add context to the game. For example, by exploring a hidden half-buried temple and clambering over the ruins and scaling massive chunks of rock and pillars, you really experience a sense of scale - you really are a tiny spec in the world and your life is truly fragile. This sense of being a small object in a vast world comes across even more forcibly when you see your enemy for the first time. The camera pans back and this huge beast fills the screen. They usually move slowly and gracefully, but at the same time they’re all incomprehensibly powerful and deadly. Some will attack you straight away, others are passive creatures that attack only when provoked, but it all adds to their sense of personality and uniqueness. You’re made to feel like a puny figure on the screen, even though the camera is directly behind you. Equipped with just a sword and a bow and arrow, you feel like you’re trying to accomplish an impossible task. Again the sense of scale is just immense.

How do you kill them? Well almost all of them require different strategies, but so as not to spoil one of the best parts of the game (that of sizing up against each colossus and working out how to defeat him) I’ll only mention the aspects of combat which remain constant throughout the game. Each colossus has a weakness which allows you to clamber on to him. Once on the colossus you’ll usually have to scale his body in order to reach one or more of his weak points. This can often take a long time, these things are giants, so you have to grab and hold on to the colossus as you gradually move up its massive body. But you only have a limited amount of stamina with which to grab, so you have to be on the move a lot of the time. All the while the colossus is frantically trying to flick you off.

When you reach a weak point you need to steady your balance and wait for a lull in the giant’s movements, then you pull out your sword and hold it back ready to thrust into the flesh. The longer you draw the sword back the more damage you’ll do. Most of the time you’ll have to stab the weak point several times, and you’ll often have to calculate how long you will be able to charge up your attack before you’ll be knocked off balance. It’s a satisfying feeling when your sword slams into the giant, blood squirts out everywhere and he groans and lashes out in pain. If you’re not careful you can find yourself tumbling back down its massive body. When the beast finally succumbs and his massive body collapses to the ground, lifeless and dead, you feel a sense of accomplishment and regret. Whilst the challenge is made to feel immense (and so giving you that feeling of accomplishment) at the same time you’re made to feel like you’ve killed a creature full of personality and feeling.

As I said above, each one is defeated differently – initially you can simply scale and stab the giant’s weak points relatively easily, but almost with each different colossus a unique element is introduced. This could be the need to use the bow and arrow, waiting for the colossus to attack you and let his guard down, or even getting Agro to distract and panic the colossus (like an elephant afraid of a mouse). So whilst there are always the common elements of finding the weak points, scaling and holding on to the colossus, and then finally stabbing him, there are also fresh elements introduced throughout the game.

My main criticism of Shadow of the Colossus revolves around the camera. It takes a while to get used to, and even then it can still be frustrating and fiddly at times. Often when running around a colossus, or when riding Agro, the camera attempts to compensate for the new direction in which you are travelling, but this sometimes forces you in the wrong direction. This often means that you will have to take control of the camera yourself in order to compensate for its deficiencies. As you’re travelling across the worlds towards your next colossus a sense of isolation really underpins the epic nature of your journey. There’s a lack of music, and your only company is Agro and the subtle sound effects of the world around you. You hear the wind rushing across the barren landscape and Agro galloping across the ground. This period of quiet contemplation is the calm before the storm and it really builds up the tension and anticipation of the battle which follows. When you finally approach your nemesis a tense orchestral score gradually builds up and finally comes to the fore when you’re deep in combat. It really adds to the intensity of your battles, and it’s the perfect choice of music for such epic struggles.

The game has a beautiful look to it. Each colossus is incredibly well detailed and exudes personality. Be it in the emotion shown through their eyes, which can vary from the confusion caused by your agility and their inability to capture you, to complete and utter rage, or in the finely detailed fur which moves gracefully in the wind and when you clamber through it. Each one is completely different from the next, so some have a reptilian look, with scale-like pale green skin and no fur, others seem to resemble dinosaurs, with a strong naturally armoured skin, and some are even clad in ancient stone armour plating and have the weapons to go with it. Some of the colossi look incredibly tired and worn, with battle scars to suggest that they’re ancient beasts and you’re not the first person to have tried to kill them. The world is massive, set on a grand scale to mirror your epic struggle. The draw distance is impressive – when riding Agro through the desert landscape to your next destination, you can see the world stretching out impressively before you. You can see the outcrops of mountains or hills, the change in setting from desert land to lush green tropical regions, or to dark ash covered plains, or huge reservoirs of water. The level of variation within the world is surprising, each battle has a unique setting which is artistically detailed. For a PS2 game this is all extremely impressive, all the more so when up-scaled on my PS3. There are occasional framerate dips, but they are understandable given the size of the world (and the colossi) and the scale of the battles, and never really affect the experience.

The game is pretty lengthy. Whilst 16 boss battles doesn’t sound like much, the process of exploring the world, finding their general location, completing a series of platforming puzzles, engaging in combat, working out the correct strategy, and then finally defeating each colossus, is a lengthy one. Beyond that there isn’t much to do in the world – there are no side quests, so the only other thing you’ll find yourself doing is exploring the world and taking in some of the gorgeous sites from the tall mountains and hills. After completing the game you unlock a hard mode and a time trial mode. These serve to provide an extra level of challenge, but don’t really introduce anything new beyond that. Don’t let this put you off though – this isn’t a game that needs extras to fill it out, the epic single player experience is more than sufficient.