Aliens: Infestation is not a game that lets you rest on your laurels at all. Get careless, or start rushing through Infestation’s Alien-infested corridors and you’ll soon start burning through your limited supply of Marines. Aliens: Infestation is the latest game from WayForward Technologies, the guys behind the exemplary [url=http://gamrreview.vgchartz.com/review/39135/shantae-riskys-revenge/]Shantae: Risky’s Revenge[/url] ( or perhaps [url=http://gamrreview.vgchartz.com/review/50746/bloodrayne-betrayal/]BloodRayne: Betrayal[/url] if you’re feeling less complimentary). Like Shantae, Infestation is a Metroidvania game, although a version that’s unlikely to garner quite as much critical acclaim.

Infestation opens quite slowly, despite being a short (6 or so hours) game. There’s not an Alien in sight as you explore an apparently abandoned (yeah, right) space vessel with your squad of four Marines. The corridors are mostly empty, and all-too identical. Tedious and underwhelming encounters with hostile robots are broken up only by dialogue scenes that try to shove the Marines’ exaggerated personalities down your throat. It’s an attempt to replicate the feeling of suspense that the first Alien film in particular is famous for, but it doesn’t really pay off. You could be forgiven for wanting to give up, but it’s worth sticking with it; Aliens: Infestation, once it dispenses with its opening scenes, becomes a tense, challenging experience. 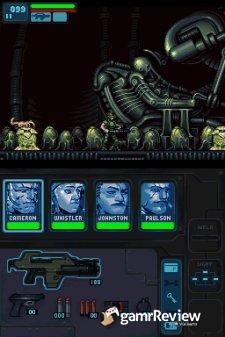 Although there are four Marines in your squad, you only actually control one of them. It’s a sadly missed opportunity to introduce squad-based mechanics to the game; the Marines don’t even have unique abilities or weaponry. Essentially, the additional Marines in your squad act as extra lives – once your current grizzled spacer goes down he’ll be replaced by someone else from your squad, and so on until you have none left, in which case it’s time to say hello to the True Death. You occasionally come across survivors, so you will have the opportunity to replace fallen comrades, but finding these extra recruits will mean exploring new portions of the map, and that in itself is a huge risk.

Infestation is a tough beast to tame. Only by methodically working your way through the map (and your enemies), making good use of the safe rooms to save and replenish your health and ammo, and planning your routes out in advance (enemies respawn once you leave the area, so you won’t want to be making unnecessary excursions) will you make it out alive. It makes for a tense time, this throwback to an era when games didn’t offer so many crutches and so much hand-holding. That’s not to say it eschews hand-holding entirely – some will be disappointed in the relative linearity of the game, and the way in which your progress feels very regimented.

Of course all of this, as well as the characteristics of a Metroidvania game, brings with it a whole tranche of negatives – the tedium of constant back tracking in order to open up a new section of the maze (made that much worse when you’re unsure where you need to go next), endless samey corridors, the identikit nature of the obstacles that impede progress, and so on. But when it’s at its best – when you’re making progress, covering new ground, coming out barely alive and feeling a genuine sense of accomplishment as a result – Infestation is great.

The touch screen is a useful annoyance. Annoying in the sense that the controls feel less than ideal when flipping 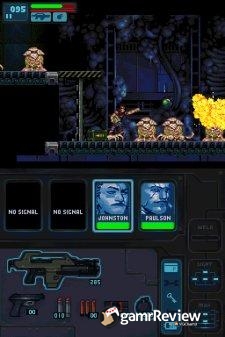 between the map and the inventory (which you’ll have to do… a lot), but useful in that the DS allows for your entire inventory to be put on display on the bottom screen, and navigating the map with the stylus feels very natural. There are a couple of other blemishes on the otherwise engaging gameplay as well: encounters with human enemies are tedious, and shooting in any direction other than straight ahead is cumbersome and frustrating.

The backgrounds and environments are nicely detailed, they’ve clearly been paid a lot of attention, but they’re nonetheless repetitive. The sprite work is also good, if not particularly remarkable for the most part. There are some neat little presentational details though, like the lime green acid blood of the xenomorphs, or facehuggers bursting out of human chests. The infamous beeping of the motion scanner as it picks up nearby enemies is fantastic as well. The music, however, did not appeal to me at all – it sounds dated, monotonous and, eventually, just plain annoying.

Whilst I found the Marines’ personalities to be far too overt and obnoxious (each one is a blatant stereotype – there’s the geeky tech guy who’s scared out of his mind, the alpha male leader, the hard-ass ‘woman who’s tougher than all the blokes’, etc.), it’s still easy to appreciate the work that went into creating so many different characters – 19 different Marines in all. Not only that, but the characters you recruit to your squad to replace dead members all have unique and fully fleshed-out dialogue scenes.

It’s a short adventure, and one which I have very mixed feelings about. At times Infestation feels like a great marriage of the Aliens licence and the Metroidvania side-scroller, but the frequent occasions when, instead of feeling consistently rewarding and intriguing, it just comes off as repetitive and tedious, bring it back down to Earth. It’s easy to recommend Aliens: Infestation to those who find the concepts on offer appealing, but not without certain qualifications.