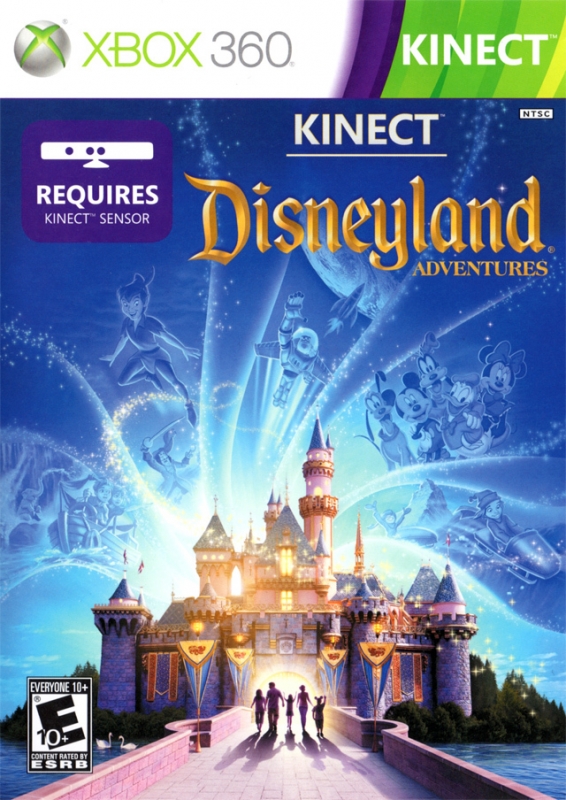 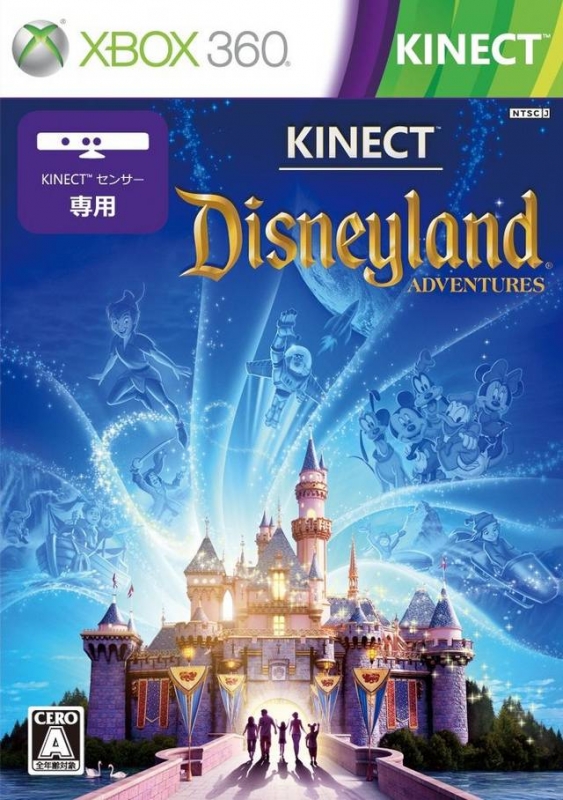 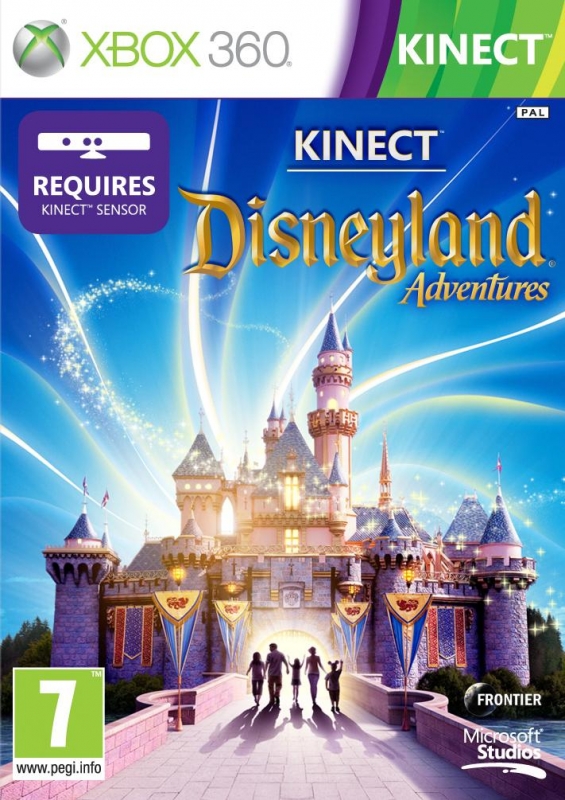 A little too much Wizard of OZ

Kinect: Disneyland Adventures isn’t just your typical Kinect mini-game collection for kids, it’s an actual virtual recreation of that most famous of theme parks. Having never been myself, it’s hard to attest to the accuracy of Frontier’s virtual Disneyland, but it’s packed with sights and sounds from staple Disney franchises that should make it a joy for kids to explore. Ultimately, though, it becomes too derivative, and falls short of the best that Kinect has to offer families and children this holiday.

The first thing you’ll do in Kinect: Disneyland Adventures is create a character to be used throughout the game. Character creation is simple enough that anyone can navigate the options, but still manages to offer just about enough breadth of choice for you to come up with a character that suits. Once that’s out of the way you’re free to explore the  park to your heart’s content. It’s a massive, bustling, open world, full of kids dragging their parents around from attraction to attraction. The park, and the activities you can complete throughout its open world environment, makes up half of the game. The other half consists of the ‘rides’ themselves, which is where the mini-games come into play. 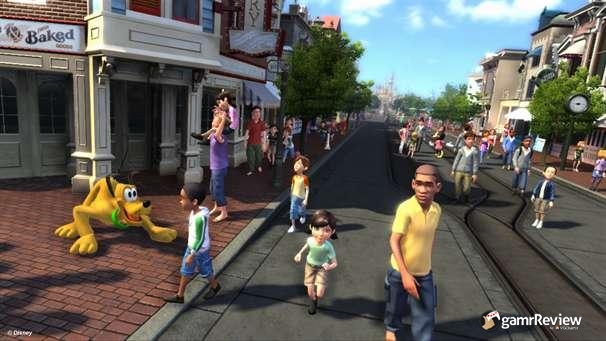 This is the first Kinect title I’ve played which has allowed for unrestricted movement in an open space, and it’s surprisingly intuitive and workable. You turn your character either by twisting your body around in real life, or (and this is my preferred system) by moving one of your arms to the side. To move forwards all you need to do is point straight ahead. Combine the two (pointing ahead, but slightly off to the right, for example) and your character will move in the appropriate direction. It’s not without its limitations – you can’t move backwards, for instance, and tight spaces result in a lot of stopping and starting. Fortunately, the theme park is full of open spaces, so it rarely becomes an issue.

Dotted about the park are dozens of famous Disney faces, from Donald Duck and Mickey Mouse, to The Beast and Snow White. You can run up to each one and interact with them (just as you can in real life) using simple Kinect gestures and voice commands. Mickey is the first character you’ll come across and he starts you off on a series of mini-quests, from collecting autographs and photographs, to helping out other Disney characters around the park. The interactions are just as you imagine them to be in real life – lots of hugging, photograph and autographing-hunting, dancing, high-fives, and the like. It’s the sort of thing young kids will lap up. 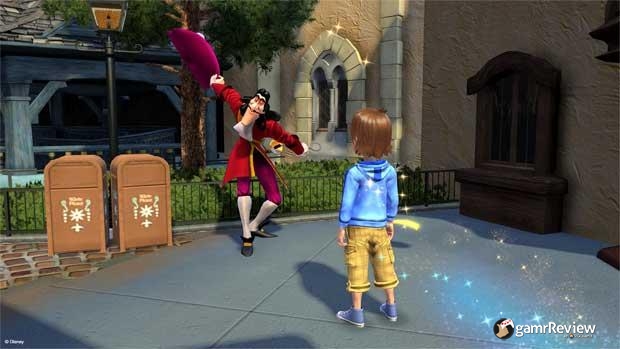 The Disney characters are all well animated and superbly voice-acted. Their individual personalities remain true to their on-screen personas – The Beast is a gentle, respectful soul, Mickey is cheerful and joyous, and Pluto’s a lovable idiot. Though your interactions with each are essentially identical (wave, hug, dance, high-five, autograph, etc.), their individual performances are obviously distinct. The camera does strange things during many of the interactions you have with these characters though; it feels disjointed and almost nausea-inducing.

Disneyland wouldn’t be Disneyland without the themed rides, and this is where the cinematic mini-games come into the picture. In one mini-game you’ll be speeding down the snowy slopes of the Matterhorn with Goofy, the next you’ll be playing croqeut with Alice in Wonderland. They’re extremely fast-paced, so it replicates the feeling of being on a ride at the same time as it uses Kinect gestures to encourage player interaction. Couple this with a system that rewards players for performing well without penalising you for messing up, and it’s ideal for kids. The downside is the lack of variety in gameplay between the different rides – in the aforementioned Goofy and Alice rides, both require you to interact with Kinect in completely identical ways. That is, moving left, right, and jumping up and down to dodge obstacles and collect coins. The gameplay experience is identical, even if the presentation has changed. And unfortunately the same is true of the vast majority of the mini-games on offer. It isn’t just variety that’s lacking either. The gameplay mechanics also feel shallow, simplistic, and far too sensitive to player movement. The enjoyable facade gives way quite early on, and it wasn’t long before I was hankering for the charm of Kinectimals and Sesame Street, or the depth gameplay on offer in Kinect Sports: Season 2 instead. In short: the gameplay is limited and simple, saved if anything by the varied on-screen presentation which captures the look and sound of its real-life inspiration. 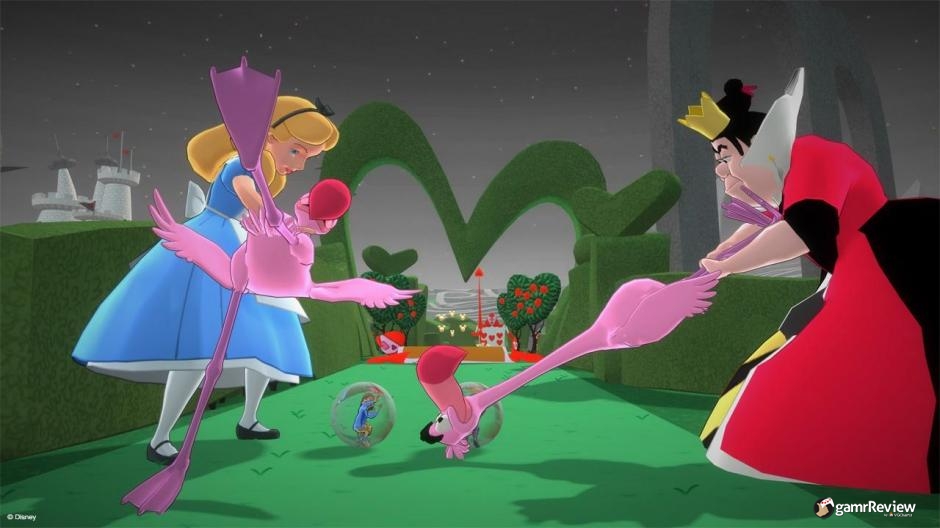 What Disneyland Adventures does offer that no other Kinect title really matches is a sense of scale. There are some technical issues – aside from the aforementioned camera problems, there are also dull textures and a fair amount of pop-in, but the market this game is most likely to appeal to probably won’t even notice, and certainly won’t care given that they’re able to explore Disneyland in the comfort of their own homes. Like many Kinect titles, it looks and sounds surprisingly great considering what we’ve come to expect from casual mini-game titles in the past; it’s certainly an attractive game, despite the occasional drawback.

If you/your children do enjoy the gameplay on offer then Kinect: Disneyland Adventures has a surprising wealth of content to explore. As well as the mini-games and character interactions, there are tonnes of side quests and mini-games, and plenty of collectibles to find (from autographs and photographs, to hidden Mickeys, clothing and coins). You can easily find yourself with overall progress below 10% even after 10 hours of play time, it’s just a shame that lacklustre gameplay depth and variety severely limits its lasting appeal.

Kinect: Disneyland Adventures is the only Kinect title featuring such a fantastic wealth of Disney franchises, so it’s an absolute no-brainer if you have young relatives who love Disney, and it certainly gets enough right to keep such youngsters well entertained. But its effective use of the Disney licence isn’t enough to save it from ultimately falling short of higher standards set by the likes of Kinectimals, Sesame Street: Once Upon A Monster, and Kinect Sports: Season 2, all of which are more rounded, enjoyable gameplay experiences. Unless your kid’s a Disney nut, I’d recommend other titles well ahead of this one.