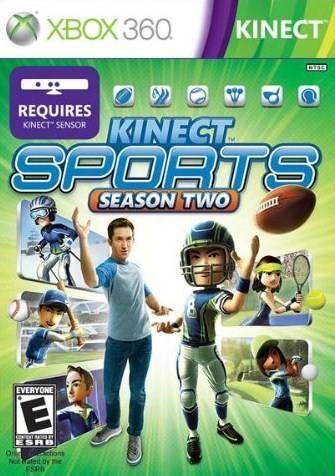 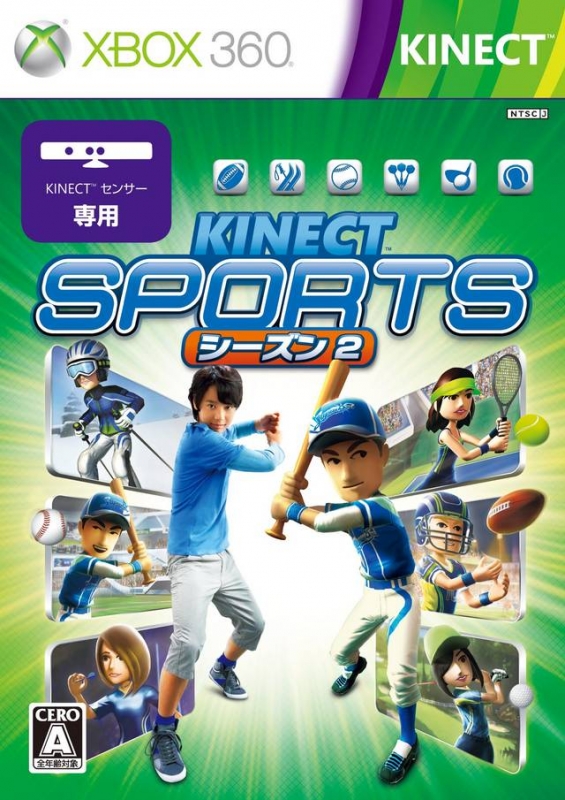 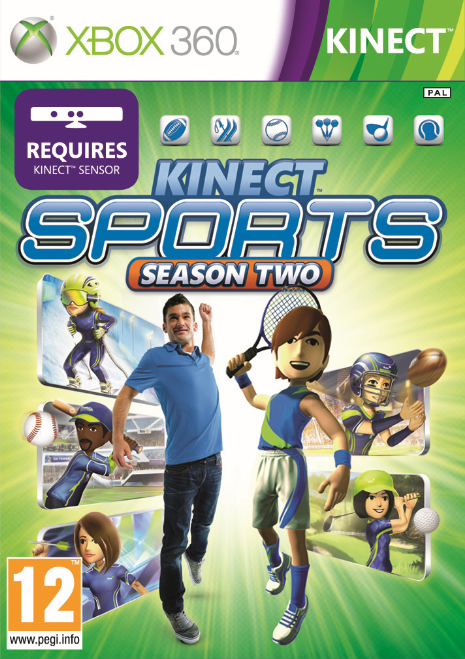 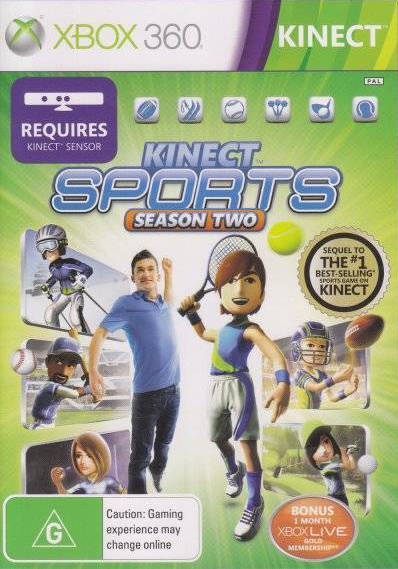 As Kinect enters its second holiday on the market, many owners are looking for new, quality experiences on the motion control device. Rare’s sequel to the highly successful Kinect Sports is among the most anticipated of the games designed specifically for the device. Microsoft’s answer to Wii Sports saw both high sales and some of the best reviews of Kinect’s launch software. Kinect Sports: Season Two arrives with an all new suite of six different sports, but is it worth plopping down $50, or would this annual entry have been better off taking a bye?

When you boot up Season Two you’ll immediately be presented with the options to pick a sport, start a challenge, or quick play. Picking a sport will let you choose from one of the six sports in the game (Football, Baseball, Darts, Skiing, Golf, and Tennis) and hop right into single or multiplayer matches, and quick play randomly chooses a sport from the available list. Challenges let you pick an Xbox Live friend and then play a single round of a specialty event, which then sends a challenge to them to play the same event and compete for a high score. All events are playable against human opponents or three difficulties of AI opponents. Football (of the American variety, to clear things up for our international readers) is the most prominently advertised sport of the collection, and the one featured on the cover. It’s also by far the least functional. It is four down backyard-style football. This means you have four downs to score. You can choose from six different plays, all passing, and competitive multiplayer is hot-seat, with neither player ever playing defense. You’ll start by fielding the kickoff, and running in place to get as many yards on the return as possible. You can pass to one of three receivers on each of the four downs, and you can kick a field goal or punt on fourth down depending on how far you are from the endzone. Cooperative multiplayer will put one player in the position of the quarterback and the other in the receiver spot. While this constitutes a small fraction of the nuance of the sport, the simplification is understandable for the benefit of children and time. The lack of some features is curious. For example, there’s no way to stiff arm or dive around opponents. The larger issue is simply that the game doesn’t work well. Whether you shake a tackle while running or not seems completely random. On more than one occasion my Avatar would pass without me so much as twitching my hand. Selecting a receiver also requires extremely exaggerated motions. For example, to hit the receiver on the left you need to angle your arm much farther to the left than feels fluid. Even then you risk Kinect failing to recognize your target. This issue is compounded by the delay on the device. There’s only a certain window when a pass is likely to succeed (indicated by a bright green target above a receiver’s head), and with the game’s delay on performing your action you’ll be frustrated on more than one occasion. That’s not to say that football doesn’t work at all. At its best it can be moderately entertaining, but it’s easily the weakest of the offerings.

Fortunately Baseball fares a bit better. This game allows two players to play simultaneously, with one pitching and the other batting, similar to Wii Sports. As a hitter you can give the ball a good whack and hope for a homer, or bunt the ball and try to steal first. After you hit you will occasionally be given the option to run in place to take first. Pitchers can pitch a range of different pitches from fast balls to curve balls, varying speeds with each pitch. If a ball is hit to an outfielder you’ll also be given the chance to stretch out your arm and attempt to catch it. Baseball also has a home run challenge, which is what it sounds like.All of this is great in theory, but again accuracy issues cause problems. Home runs seem more random than based on force or timing, and it will take some time to get used to the swing delay. More of an issue is getting the game to pitch the specific type of pitch you’re trying for. Exaggerating motions can help, but often it will be a crap shoot. Oddly the speed of the pitch seemed almost completely random. The game will recommend specific pitches, but good luck trying to match the speed and type it recommends. Even with these issues, Baseball is moderately enjoyable, and the controls feel intuitive and fun, but the remaining four sports all fare better. Rounding into the third sport in the package, Golf is among the most intuitive. As you’d expect you simply swing to hit the ball, with distance dependent on the speed of your swing. Golf seems to recognize speed better than baseball, and I found I was able to put the ball where I wanted almost every time. The direction of your short is adjusted by stepping forwards or backwards. Kinect doesn’t read this action nearly as well, and it can take multiple attempts to line up a shot. In one of the best uses of voice command in the game, you can simply ask your caddy for a different club. Unfortunately, there are only 9 holes to play in golf, as well as a challenge event where you hit balls off a boat into targets in the ocean. All in all, golf is a great addition to the package.

You’ll be happy to know that Kinect Sports: Season Two handles Tennis just as well. As you’d expect, Tennis will have you whacking the ball while pretending to hold a Tennis racket, while movement of your Avatar is automatic. The game accurately senses forehand and backhand swings, although, like baseball, power can feel a bit random and the delay can take some getting used to. One thing you don’t really have to worry about is keeping the ball in bounds, as the game seems to automatically hit to a spot within the court. If a hit is called out, you can shout “Objection!” to challenge the ruling. The coolest part of Tennis is that you can actually perform a topspin shot by stepping in and cutting under it, then brushing up with your hit. This really feels great, and mimics the actual motion for topspin. The challenge mode of Tennis has you whacking the Kinect Sports mascots with balls. All told Tennis is really enjoyable, and one of the more enjoyable games to play with friends. But wait! There’s more! The fifth sport of the included six is Skiing, and it really feels like it was made for the Kinect sensor. Skiing will have you crouching down for speed, tilting side-to-side to steer, and jumping to, well, jump. Multiplayer will have you racing down a course through pylons to gain speed, crowning the champion based on time and least penalties. Challenge mode is a more complex hot seat obstacle course, that requires quick reflexes to dodge, duck, and jump obstacles. All of these control incredibly well, and it makes for a fluid and natural use of Kinect. The downside is the simplicity. There’s no real complexity to the courses themselves. They are simply straight downhill slopes. A real skiing game with actual turns and course variety would be great, but for a minigame this is a fun distraction. I’ve saved the best for last. Darts is the only sport in Kinect Sports: Season Two that genuinely feels exactly like a simulation of the real thing. You will hold your hand out in the position in which you would really throw a dart (two fingers and a thumb). A reticule is put on the board to aim (because there’s no way for Kinect to know your hand’s exact position to the TV). Once you have your aim lined up, you pull back at the elbow and release. Whether you hit your target or not is based on the fluidity of the release, as well as the force. Challenge mode will have you popping balloons as they spin around a wheel for points. Darts is a blast, especially with other players, and genuinely feels different from what we’ve seen in motion control sports games in the past.

Following the style of the previous entry, Kinect Sports: Season Two goes for the minimalist-but-cute approach, as seen by the Wii series of games in the past. Nothing about the graphics will impress, but then they don’t really need to. The game adds some nice upbeat music, and in a genuinely entertaining move allows you to dance your avatar around in celebration to some appropriate licensed music every time you accomplish something in one of the sports. Menus are serviceable and intuitive, and like much of the interface in the game navigable with both motion and voice. As a nifty little extra the game also includes an in-game calorie counter, although as the game never actually asks your weight it's tough to tell how accurately the camera is judging your calories burned. Unfortunately, Season Two’s biggest shortcoming is value. Like the original Kinect Sports, only six sports are present in the game, and not all of them are incredibly fun. To compound the issue, every time you play each sport they will be exactly the same. There are only nine holes in golf and only one set of courses for skiing. The challenge modes add some slight changes to five of the sports, but again these are the same every time you play them. In addition there is basically no reason to play the game in single player at all, other than to beat the three difficulty levels of AI opponents. You can also play online on Xbox Live, and send challenges to other players to beat your scores in challenge modes of sports, but neither of these is as fun as local play. The only other extension to value the game adds is an arbitrary leveling system which provides no real benefit. All this combines to make $50 a pretty steep asking price. Kinect Sports: Season Two is not going to be the best game you play on Kinect this year, nor is it going to shatter the expectations of motion controlled sports games. It expands on its predecessor, but not all of the new sports are hits. Most of the games are winners, and Darts is really great, but Baseball is only serviceable and Football is more frustrating than fun. These issues are compounded by a general lack of content all-around. You can play through every single thing Season Two has to offer in the span of a few hours, and while you’re likely to come back for more when you’ve got friends over, there’s little reason to play solo. In the end the goal of any party game is to be fun, and Kinect Sports: Season Two succeeds at that, but maybe not well enough to buy at full price.