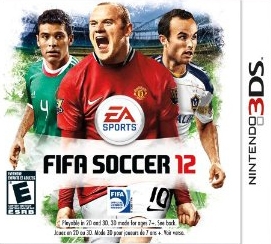 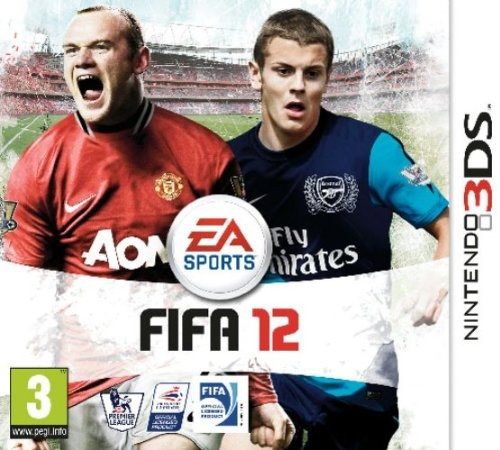 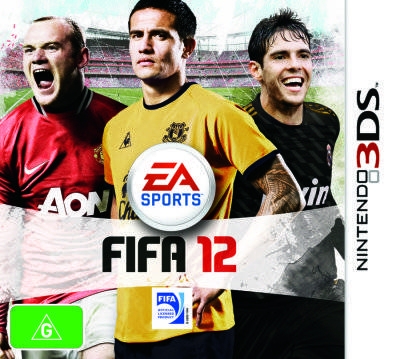 Fine touches all around.

FIFA is the type of game I always imagined would benefit greatly from 3D. The fast-paced fluidity of the visuals and gameplay could only seem much more impressive accompanied by the sensation of shots hurtling towards the player. Turns out I was right, at least according to my experience with FIFA 12 on the 3DS. The game’s highpoint is its effective use of 3D, but it backs that up with solid gameplay that authentically re-creates the tried and true FIFA formula with a few extras only capable on the 3DS. It falters in other areas, compromising vital parts of what makes FIFA so popular, as such it may not be the first choice for someone looking for a videogame soccer (football) fix this year.

The controls work well, except in regards to dribbling. This really hampers enjoyment because, while not impossible to execute, trick spins and other moves are difficult to master, making it hard to keep possession when you first start playing. The touch screen controls are integrated well though; I felt more at home taking shots by pressing my thumb against the touchscreen rather than holding down the A button. The game encourages this option, making it somewhat forgiving, though not so easy that it breaks the game. The heart of the game is the career mode, which has been intelligently adapted for portable play. Most of the depth found in the console versions finds its way here through an easily accessible interface. You come on as a new manager and take control of the team of your choice. You set goals for yourself and the team that will increase your reputation once achieved. The controls are touch-based, so get ready to put the stylus to work as you manage everything from hiring a team doctor to bidding against other clubs on valuable free agents. FIFA 12 on the 3DS has everything you can want out of a career mode - tournaments, team practices, an active trading market, and the satisfying sense of immersion that will have you spending countless hours propelling your club to legendary status.

Some of the stages from the Street mode seem a tad lazy. I doubt that there are any empty lots with pyramids in the background, but then again if there weren’t any pyramids how would people know they were in Egypt? The Street games have some issues, primarily stemming from how differently certain goals are set up. One may only be a narrow vent while another will just be a square area on a wall. These make for varied experiences, but if the goal is just a solid wall there is no break in the action after a goal. Sometimes I failed to realize one was even scored, and the ball can rebound against the goal multiple times, leading to numerous goals in a matter of seconds. The Street mode is a more realistic affair compared to EA Sports’ seemingly defunct FIFA Street series, however, and despite its drawbacks it is a mildly entertaining alternative to standard play on the pitch. FIFA 12 also features over 50 tournaments for you to compete in and allows you to keep track of which trophies you win.Unfortunately there is no online multiplayer. I did not go in expecting the whole gamut of online features available on the console versions, but simple matchmaking options would have sufficed for now. As it stands, unless you have a hardcore circle of FIFA fans for friends who are prepared to play on the 3DS rather than a console, you will spend most of your time playing against the computer AI. This is especially annoying because this version of the game, before its release, was touted for its “head-to-head online matches using Nintendo Wi-Fi connection.” At least it is a step up from EA Sports’ first 3DS title, Madden NFL, which egregiously featured no multiplayer at all. Here's to baby steps. However, the game is not completely devoid of online features. You can download roster and kit updates from the web to keep things fresh. Unfortunately, that's it in the way of extra content, because FIFA 12 does not support the Spot Pass or Street Pass features either. FIFA 12 manages to capture the look of FIFA well, but not perfectly. Most of the character models have been scaled down appropriately without sacrificing much in the way of detail. That being said, the options for creating your own character are limited, and there doesn’t seem to be a way to ensure he doesn't have a possessed look in his eye. The pitch and stadiums look pleasant, although I never thought I would actually admit to missing the ads that usually litter the game; they really add to the sense of immersion. There are times when the animation sputters, and when that happens it looks like you're playing an extremely dated version of FIFA.

It really takes advantage of the 3D feature of Nintendo’s newest handheld though. There are camera angles specifically made to draw attention to the 3D effect, presenting the action up close and personal. While they work as advertise with respect to the 3D effect, these special camera angles are not optimal for playing. Interactive replays look great, and the game always tries to give the sensation that the ball is coming at you after you score a goal.The audio is crisp and clear. Commentary, provided by Martin Tyler and newcomer Alan Smith, is dynamic and comprehensive. The sounds of the pitch are all familiar; the crowd chants respond to the action on the field, and players occasionally shout out to each other. Finally, the soundtrack features some nice up-tempo tunes from artists like The Ting Tings, The Strokes, and Alex Metric, it's just a shame the game doesn't allow you to customise the soundtrack to your liking - it's a feature that is often taken for granted.FIFA 12 is a solid debut for the franchise on the Nintendo 3DS. That said, it obviously doesn't hold a candle to the exquisite console versions of the title, so it's impossible to recommend it as a wholesale substitute. If constant travel gets in the way of your quality FIFA time, this will certainly ease the pain; for all its faults, FIFA 12 manages to deliver an experience far ahead of what the series could accomplish on the original DS.