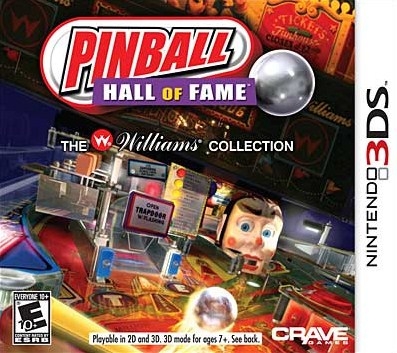 3D Flippers and balls in your pocket

Pinball has an interesting place in gaming history. It started as little more than a game of chance not even having those trademark flippers until the late 1940s, and then electronics happened. Suddenly those same elements that we relate to video games were being developed for these arcade tables. Automatic score keeping, sound effects, graphics, levels, extra “lives”, boss battles, and more got their start here. Pinball slowly lost popularity when made to compete with the new breed of arcade machines like Space Invaders, Galaga, and Pac-man; but there are still those who have nostalgia for those tables. For those people, there is the Pinball: Hall of Fame series and now The Williams Collection has arrived on the Nintendo 3DS.Williams is a company that currently builds some of the more interesting slot machines for casinos, but it got its start back in 1947 - the same time that everybody was adding flippers to pinball tables. They produced some of their most iconic tables in response to the new solid state technology used in arcade machines like Space Invaders. These tables featured voice (amazing for the time) and interesting set ups that helped them stand out. Seven of their most popular and innovative tables were selected for the 3DS version, ranging from 1979 to 1990. You have tables like the 1979 Gorgar - the first commercially available talking pinball machine. It had a crazy 'human sacrifice to demons' theme and even featured a heart beat sound that sped up the longer you played. Or the unique 1980 Black Knight table, which featured a split board with two sets of flippers. The 1990 Funhouse (the table that graces the cover) has an interesting “clock” mechanic and a creepy talking ventriloquist dummy head called Rudy that taunts you while you play. Fun fact: the voice of Rudy is none other than Ed Boon! Yes, the co-creator of Mortal Kombat and voice of Scorpion.

If you have ever seen these tables in real life, you can appreciate how hard developer Crave Games worked to capture their every detail. The original tables were fully 3D scanned to be as accurate as possible. The physics of the metal ball, the mechanical operations of the table, and the sound effects all capture the real thing. There are several different gameplay modes, but the main one is the Williams Challenge. You have to play through all seven tables in chronological order and achieve a target score on each one. You only get three replays per table and, given the somewhat chaotic nature of pinball, this can be quite difficult. There is a free play mode, which allows you to practice for the challenge or just beat your own high score. There is also a tournament mode, which allows up to four players to compete using standard pinball tournament rules. Yes, there is a multiplayer mode. Unfortunately, it is the worst kind of multiplayer for a portable console… the pass around kind. While it is nice to be able to actually compete with friends with only a single copy of the game, it has never been fun to “wait your turn” to play without even getting to see what they're doing. I am constantly surprised at how many DS and 3DS titles persist in ignoring the very existence of the internet; there aren't even any online leaderboards, nor are there any online tournament modes. What good is my orange blinking Wi-Fi LED indicator if nobody uses it? Speaking of not using everything at your disposal, there are only seven tables in the game. You can get 13 tables playing the PS3 or Xbox 360 versions, but maybe that isn’t a fair comparison - this is a portable system after all. Except that last year this game came out for the PSP and it featured 10 tables. I know that the 3DS cartridge has a bit more capacity than the UMD does so it can't be a space issue.  Even more confusing is how you can still earn “credits” for completing certain goals on the tables that in other versions were used to unlock new tables. Here they are only used to unlock freeplay mode for the four of the seven that are initially limited. Baffling. The 3D works fine (and doesn’t hurt my eyes like some other games have), but that being said I wish they had left it out. Activating the 3D instantly dims the screen and damages the frame rate. Like in fighting games, even the smallest split second stutter in response can be a game breaker for pinball. That is the difference in sending the ball into a million point zone and having it bouncing directly in the pit. Thankfully, with the 3D off everything is smooth. You also have two ways of controlling the game - either playing it with a normal orientation and using the R and L buttons for the flippers, or turning the system upside down, which allows you to grip the heaviest part of the device and use your thumbs to activate the flippers. I preferred this method as it was the most comfortable for my hands. There is a lot of potential for fun here. An in game guide is there to point out the rules of each table, which will greatly help you understand what you should be aiming the ball at. The tables are different enough from each other to make it fun to figure out their quirks, and it is very apparent that there was a real love of the source material from the developer. Many retailers are even selling it for $20, which is half of the price of a standard 3DS game.Unfortunately, the 3DS feature which was utilized (the 3D) hurts the overall gameplay, whilst the one which would have improved it has been ignored (online support). It certainly doesn’t help that for $40 you could play this game on your PS3 or Xbox 360 and get almost twice as many tables, as well as some online leaderboards and trophies/achievements. The fact that the experience on the 3DS is portable does not make up for how much was removed to make it so.