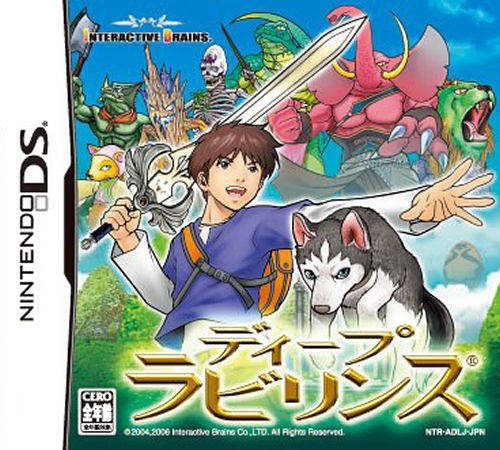 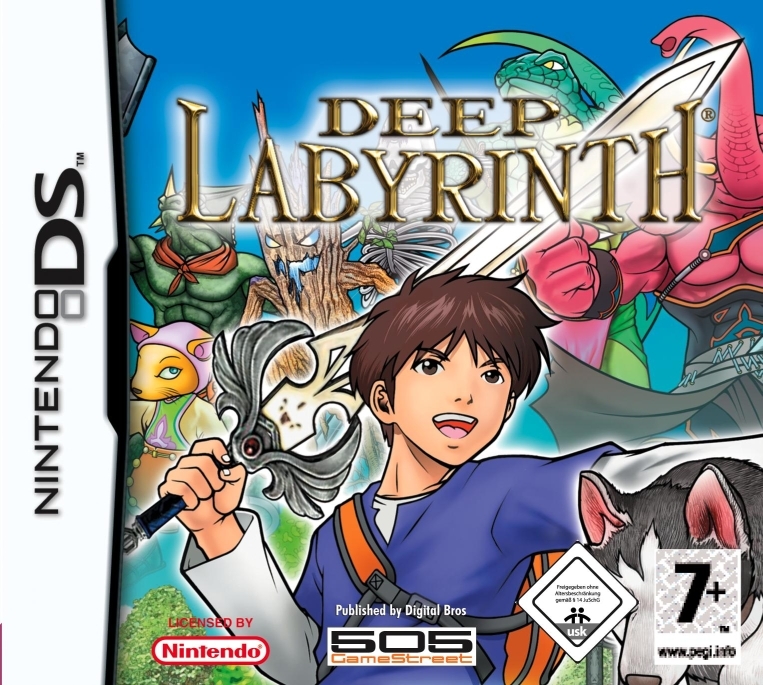 A review of a game that may have fallen by the wayside. Deep Labyrinth for the Nintendo DS is about the closest thing we have to Oblivion on the handheld.

I got a lot of good responses for my last “Through the Cracks” article, so I’ll start working on getting a few of your reader suggestions up and running soon. I’ve had trouble obtaining a few of the games on the cheap, so they’ll be ready for a future installment. This month I would like to take a look at a Nintendo DS game that was not the greatest game ever, but deserved more than the bad reception that it received. I’ve decided to go ahead and actually review this game, to show more details than a simple article would allow.

First and foremost, Deep Labyrinth is not spectacular, but I think a bit of bad press has pretty much sabotaged its success. I remember seeing some information from a few game sites about this game just prior to release, and it looked pretty good, like an “old school” Kings Field or Elder Scrolls game. All of the sudden when I started asking about this game many people would say something like “Oh! That cell phone game, X-play said it sucked.” I special ordered it anyway, and apparently they made such small quantities that I had trouble obtaining it. Truth be told, the main reason I wanted it was because I trust Atlus quite a bit, which is more than I can say about many game companies.

The Magic system is fun and rewarding.

Deep Labyrinth is notable for being the first 3D RPG released on Cell phones in Japan. It was a no-brainer that it would end up on either the GBA or the DS just because of its nature. What the DS got was not a port, but a sequel. The original cell phone game is featured as a bonus chapter on the DS cartridge once you complete the standard game, but the new game is the meat of the cartridge.

Deep Labyrinth has two very distinct stories, each with a distinctly different flavor. The first is the Shawn and Ace scenario.  It tells the story of a boy named Shawn who, while driving with his parents, happens upon a mysterious house. His parents have been quarreling lately and Shawn fears the worst. His dog Ace is clearly upset by something inside the mansion, and leaps out of the car to investigate. Shawn's parents follow Ace, but don't return. Shawn follows only to be drawn into another dimension where a monster is feeding on dreams and memories. This scenario plays out a lot like other dungeon crawlers for seasoned players, if you have played some of the older Megaten games, or Baroque, you know exactly what to expect. It even has the typical slow story that builds as you progress through the dungeon. For many that value the more cinematic gaming experience this will be a huge flaw, as the story may seem a tad weak, but with most Dungeon crawlers, the story is never the strong point. This is where a lot of bad scores came from, as this game is either a “love it” or “hate it” game, and not everyone has the patience for an old school dungeon crawler.

The second game, the original cell phone game storyline, involves a troubled man talking on his cell phone, who gets sucked into a warp hole. He awakens in a labyrinth, and needs to get out. As he journeys through, he is forced to reconcile the past, and realize what it is that traps him in the labyrinth. This scenario is not as robust as the first one, and is basically bonus content.

The game itself has many features not prevalent in the phone game including a reworked control scheme to work with the DS's touch screen and the new scenario. As a result of being made exclusively for the DS, the “Shawn and Ace” scenario features more extensive use of the DS's functionality, including microphone support and more creative uses of the touch screen. This new scenario does cool things such as using a drag of the stylus to initiate a sword attack in different directions, and a drawing based magic system. The Shawn and Ace scenario also has anime cinematics created for it that the original did not have. Some features seem tacked on, like blowing in the mic, because after you blow into the mic to open a door for the thirty-eighth time, it gets kind of old.

One of the many examples of a slight overuse of color.

The gameplay is rather simple and fun, but with any Dungeon crawler can get a little repetitive at times. What I loved was the sheer amount of fun I had exploring the dungeon. The fights were fun, and I had to think on my feet for a lot of the enemies, especially when the magic system was being utilized. For those who have played games like Lost Magic, the magic system will be at home with you, as you have to draw runes in order to cast spells. One downside to this is that in the heat of battle the game may not recognize your squiggles as fire spells and you could die. In fact that is the only downside I can think of for the total gameplay experience: the t ouch controls aren’t perfect.

Deep Labyrinth’s graphics are really good 3D  graphics for the DS.  This game could have easily been a N64 game. The only downside to the graphics that I can think of is that sometimes there is a color overload. It’s as if the creators decided to dip into some LSD when they developed some of the monsters, because you will be walking around and suddenly a vibrantly colored mass of neon colors is walking towards the screen. Sometimes I wasn’t sure if I was supposed to fight it or report it to the fashion police. T hese great graphics are sometimes undermined by the somewhat lifeless music and sound effects. With many games, the sound design can make or break the game, just look at how legendary the Mario theme or Zelda theme is. Deep Labyrinth has none of this, it sometimes feels like they used generic stock RPG music and sounds.

DL has Pretty awesome graphics most of the time

What really hurts the value of this game is the fact that it is the insanely hard to find unless you go online. There was a time when I thought it was completely out of print, and assumed it would skyrocket in price as many other Atlus games do. Thankfully you can still get it online for as little as $5.00 USD which is considerably down from 30.00 that I picked it up for (on Amazon for instance).  Because of this insane drop in price for a game that can last up to 30 hours (including the bonus content), I feel that fans of the genre are in for a treat, and should snatch this up.

Back in the day, I remember really loving games like “Unlimited Adventures” that were insanely easy to pick up, had lackluster storylines, and simple graphics, but delivered to the nth degree with fun. The exploration was always huge, and you always had a good time playing. For this, the main problem I see with Deep Labyrinth is that it came 10 years too late. But, that is the beauty of the DS. It seems that developers have really embraced the system because it picks up “dead” genres like text based adventures or surgery simulators and breathes new life into them. Deep Labyrinth has its share of problems like scarcity, mediocre sound, and tacked on DS gimmicks, but the art style, gameplay, price, and bonus content make up for it considerably.