Swords & Soldiers goes over to the dark side.

Almost a year and a half ago, I reviewed Swords & Soldiers, which was, at the time, exclusive to Nintendo’s WiiWare service. Swords & Soldiers has now been released on PSN, with a couple of notable additions. But is it enough to make up for the long wait, and has the core game stood the test of time?

The gameplay is almost identical to that of the WiiWare original. Your units – controlled by the AI - automatically move along a generally linear 2D battlefield. You select your army’s composition, determine the progress of the tech tree and draw upon a regenerating mana pool to cast spells over the battlefield like a God. It’s an RTS set-up that strips away a lot of the grinding and micro-management of most RTS games, making it ideal for the consoles.

Tech trees consist mostly of units and spells (as well as a single building for each faction). Units vary from standard melee and ranged fighters, to specialised casters and heavy warriors. Each unit has its own strengths and weaknesses when set against the enemy equivalent, and the key is to maintain a strong combination to counter enemy units. 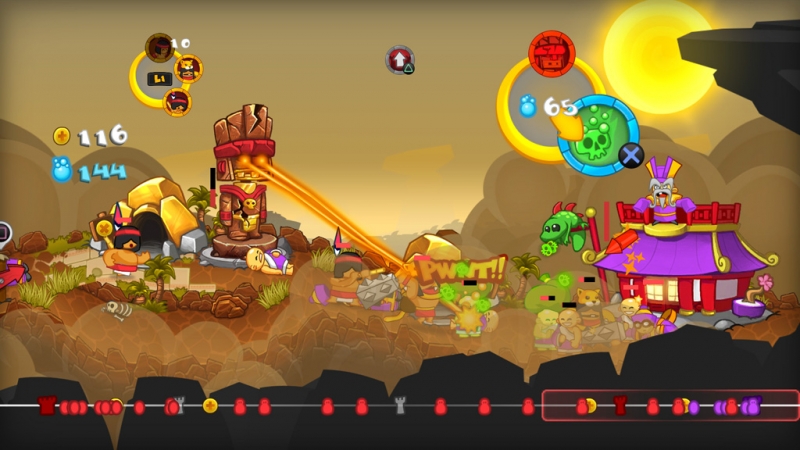 Each of the three factions (Vikings, Chinese, and Aztecs) has four standard spells and one superior spell with the potential to cause huge amounts of damage to the enemy, the best of which is the Aztec’s boulder spell, which sends a boulder hurtling across the battlefield, knocking down everything in its path (including your units, unless you manage to press X in time for the boulder to jump over them) until it smashes into a solid structure. Other, more standard spells, include the Viking ability to strike an enemy unit with lightning, the Aztec ability to perform mind control and turn an enemy unit against his own side, and the Chinese ability to rain arrows upon the enemy.

The WiiWare version of Swords & Soldiers allowed you to use either the pointer or the D-pad to scroll the battlefield, and the pointer to select units and spells. With the PSN version, you navigate the battlefield using either the analog stick or the D-pad, and use a combination of hotkeys and the analog stick to access units and spells. The incorporation of hotkeys means that nothing is truly lost in the transition from WiiWare to PSN as far as the controls are concerned; Swords & Soldiers is just as accessible and enjoyable to play using the Dual Shock 3 as it was using the Wiimote. 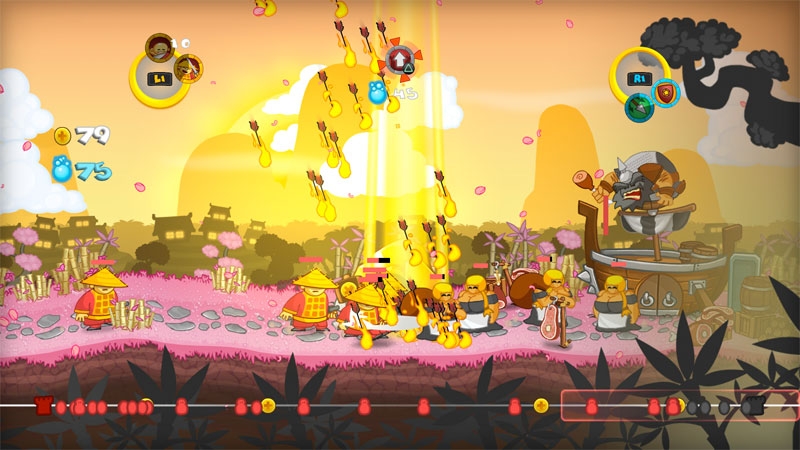 The graphics are crisper and more pleasing to look at, of course, since Swords & Soldiers is now in HD (with 3D support), but the colourful, cartoon-like graphical style remains fundamentally unchanged. The animations are quite simplistic, but the screen comes alive with activity and colour when a battle is in full swing, with masses of units engaging one another in the middle of the battlefield and spells being cast frantically. The story’s presentation is also the same – still conveyed using simple text boxes without any voice acting, but told with wry humour and wit throughout. The sound effects and music are both decent enough, but quickly become repetitive.

At $10, Swords & Soldiers is pretty good value for money considering the amount of content on offer. There’s a full story mode, spanning three different factions, which takes around five or six hours to complete. There are also three single player mini-games, each tied to a different faction. The Chinese mini-game is a survival game; a concept taken from some of the missions you complete in the campaign. The Aztec mini-game is based on their boulder spell: you are challenged to crush enemy units whilst trying to avoid your own. Finally, the Viking mini-game, which is the most interesting, gives you control of just a single unit and tasks you with negotiating a course of enemy units, utilising the spells you’re given, as well as those which you unlock during the mini-game itself. 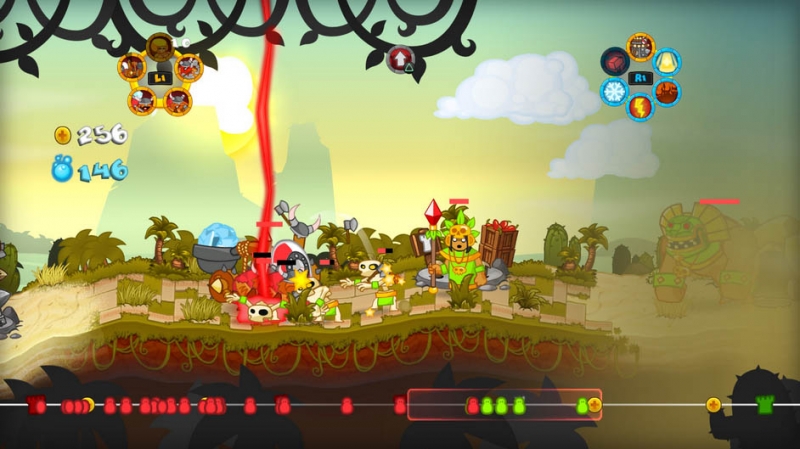 There’s also a skirmish mode, which allows you to set up a quick game against the computer or a human opponent using split screen multiplayer. This mode is fully customizable, so you can select the map, the AI difficulty, the factions used, and so on. Finally, there’s now online multiplayer – a feature which was notably absent from the WiiWare version. Finding another player is - at the time of writing - extremely quick and easy, and the whole experience is completely lag free. Sometimes, downloadable titles like this have issues with their online functionality, but Swords & Soldiers has no such problems.

To summarise, there are 3 key differences between the WiiWare and PSN versions of Swords & Soldiers: Firstly, the PSN version utilises the PS3’s HD and 3D capabilities, though the presentation is fundamentally the same. Secondly, the WiiWare version makes good use of the Wiimote, but clever use of hotkeys makes the PS3 version just as easy to control. And last but not least, the PSN version adds online multiplayer and PS3 Trophies.

It had been well over a year since I had played Swords & Soldiers, and I wasn’t really sure whether I would enjoy returning to it. I need not have been concerned - I greatly enjoyed my time with the PSN version of the game. It’s been a long wait for PS3 users, and I wouldn’t recommend it to those who’ve already played the WiiWare version, but if you have yet to experience Swords & Soldiers, then this is definitely the best version to purchase.