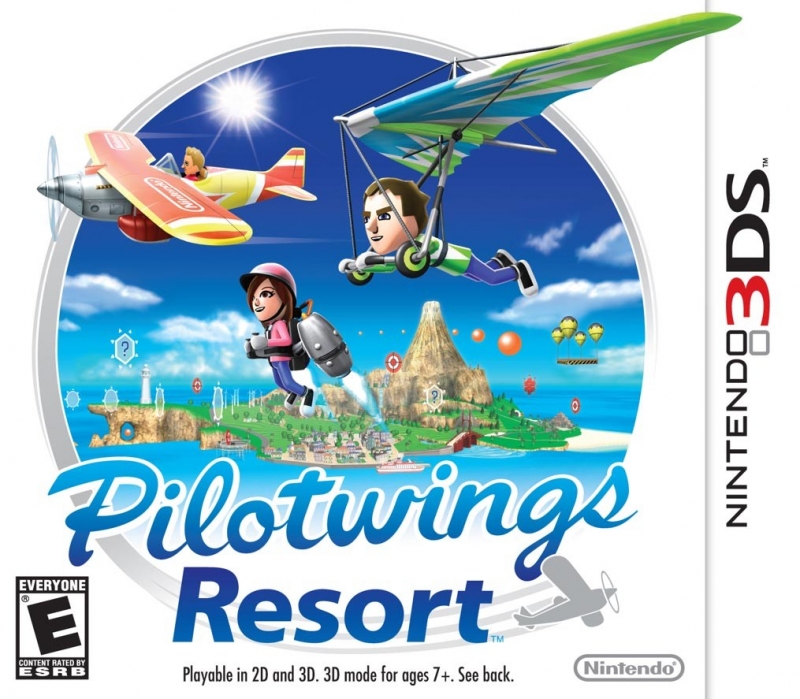 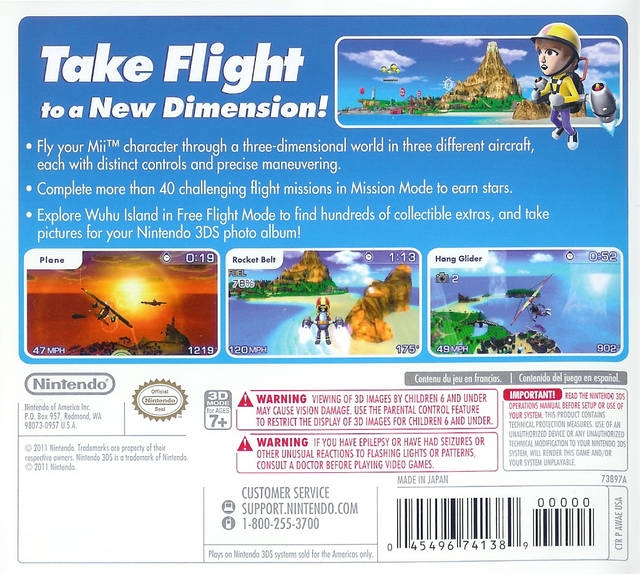 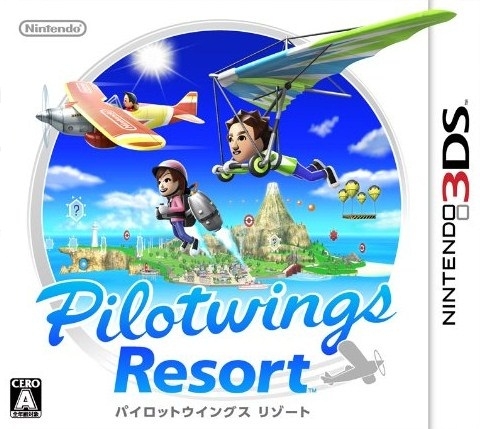 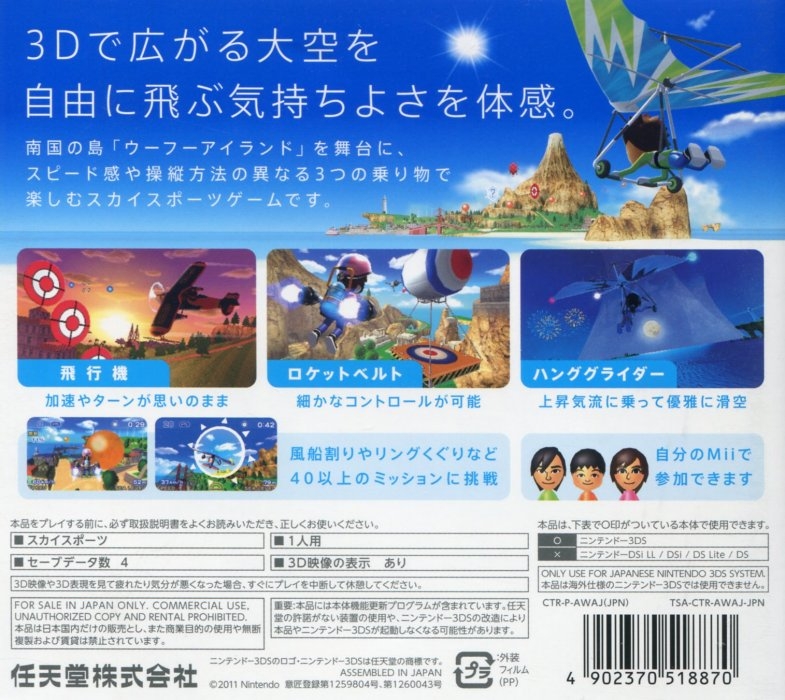 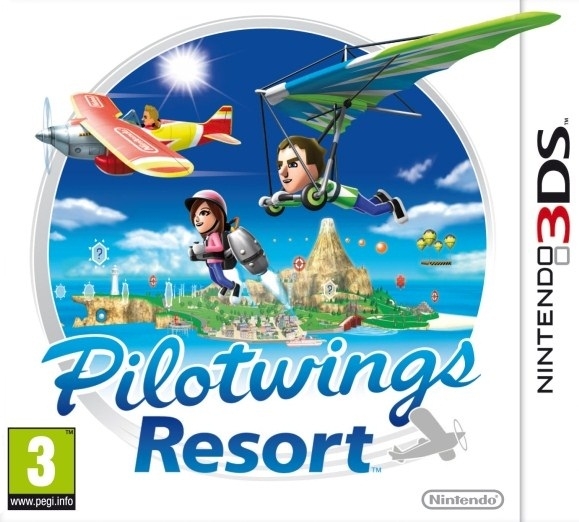 It's a party, but you're not staying long.

I never did play the original Pilotwings game on the SNES, or the sequel on the N64, so I had absolutely no expectations for Pilotwings Resort. This worked out both for better and for worse because everything was fresh and original, but it was also remarkably underwhelming since all I'd heard about the game was how it was apparently a really big deal, therefore the hype was through the roof. Sadly, Pilotwings Resort is a game that had so much potential but failed to live up to most of it. While the core gameplay was functional and enjoyable enough, there just wasn't enough of it to warrant a purchase unless you're really into minigame collections.

The setup for the game is that you're headed to an island resort on Wuhu Island aptly named the “Pilotwings Resort” (laugh now), and you're there to test out three kinds of aircraft while participating in dozens of missions of varying difficulty. The gameplay is pretty simple, and it's fun enough to play, but what really 'stands out' is the quality of the 3D effects. I can't think of a better game to showcase the capabilities of the 3DS than a game that revolves around flying rocket boosters and planes over beaches, mountains, and islands while getting collectibles and soaring through rings and into bubbles. While the 3D is great, the graphics themselves were pretty forgettable and bland, since the game relies on your pre-made Miis, and the appearance of the island is pretty simplistic. My first impression was that I was flying over the golf course from Wii Sports, which turns out to be entirely true. The graphics aren't bad by any means, but they're certainly mediocre and the music is equally forgettable, leaving the 3D effects as the only notable mention. The 3D is both a blessing and a curse, since this is the kind of game that will unlock the inner child in you. Soaring over the ocean in a hang glider will more than likely cause you to tilt your system this way and that to help your avatar aim; sadly this will not work, and will only cause the screen to lose its 3D effect since you have to have the system in a very specific position to ensure you get the most depth out of the game and any deviation - even a tiny tilt - will be enough to hurt your eyes.

There are three main types of aircraft to chose from; the air plane, the rocket pack, and the hang glider. Each one has its own unique style of gameplay and unique control scheme, as well as slightly different alternates that you get for some of the later missions. The airplane tends to be pretty straightforward, having you fly through rings, shoot at targets, and occasionally doing pretty tricks. The rocket pack is a bit more interesting and harder to control; its minigames tend to revolve around landing on platforms and navigating tricky obstacles. The hang glider is the simplest to control, but also the most nuanced of the three, since a lot of the precision comes from knowing exactly how and when to angle your wings to get that perfect speed or timing your entry into a thermal of air that will help you rise to the clouds with ease! It all works really well and there are no glitches or hangups, but that doesn't change the fact that you're going to be flying over the same island in every mission with uniquely arranged checkmarks to make each mission and that can get boring after a while. There are a decent amount of missions: 39 in all spread, amongst 5 difficulty levels (Training, Bronze, Silver, Gold, and Platinum). Naturally, the training missions are there solely to introduce you to the vehicles and the rest all get progressively more challenging as your rank grows. While each of the three aircraft are represented equally, a lot of the missions within each set are particularly repetitive. I found, more often than not, I'd do a mission consisting of one set of platforms, and the next mission would be the exact same mission but with more platforms to go on and no significant difference. This is a very cheap way to pad the length out and it will get boring long before you even finish all the missions. To make it worse, almost every mission of all three vehicles consists of hitting a target of some point, whether it be shooting targets, landing on targets, or flying through targets. Some sort of race mode or competition would be great for this game, but instead you just get to repeat the same missions over and over in time trial mode. Some of the later levels do in fact get a bit more difficult and interesting, but that's only because they let you use alternate variations of the existing aircraft while mixing up elements from previous levels and missions in new ways that appear to be more unique than they actually are.

Every mission grades you by offering you stars depending on how good you do, judging your speed, accuracy, penalties, and the amount of special bonuses you got. I can pretty much guarantee most of the levels you'll probably get two or three stars your first try, which means there's little reason to go back and play a level again unless you really want to beat your top score or time. Getting three stars in the later levels can be a matter of patience and precision; it doesn't take much effort at all to get three stars or perfect on every level, something that won't take you more than a couple days. With a lack of multiplayer or any sort of universal leaderboard, there's only one reason left to play: free roam mode. Free roam mode is the nonlinear part of the game that allows you to use the aircraft of your choice to zip around the resort and find all sorts of hidden secrets, learning more about the island as you go. This mode seemed kind of boring and shallow at first but after only a few rounds it was clear to see just how many collectibles there were and how fun it actually is to explore. It's still nothing groundbreaking, but it does give you something to do after you've gotten perfect on every mission; sadly it's the only thing to do at that point.

All in all, I managed to complete every level in the game in about 2-3 hours. Mastering them and getting all the hidden secrets in free roam mode didn't even take me 5 hours total. For some it might take longer, but most people will likely finish it in the same time frame.

I wish I had more to say about the game, but there's really not that much content to talk about. The entire game consists of the 39 missions to complete and the free roam mode, a collection task that will likely only keep your attention for a weekend. When it all comes down to it, it's very clear the game only exists to show off the admittedly impressive 3D features of the system. If this was bundled with the 3DS, or it was a discount title, or even a download, I'd be quite impressed, but as a full retail priced game it's honestly underwhelming and there's just not enough content or replay value to justify buying it. It's certainly not a bad game by any means, but it most reminds me of Wii sports in that it's just a collection of minigames meant to showcase the system's capabilities.