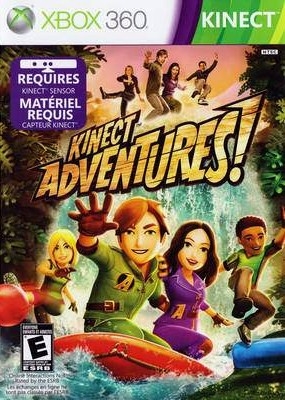 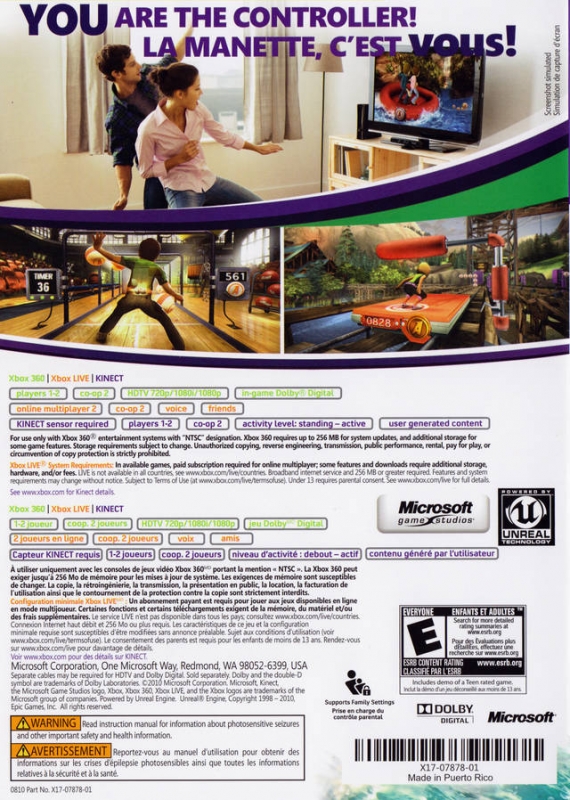 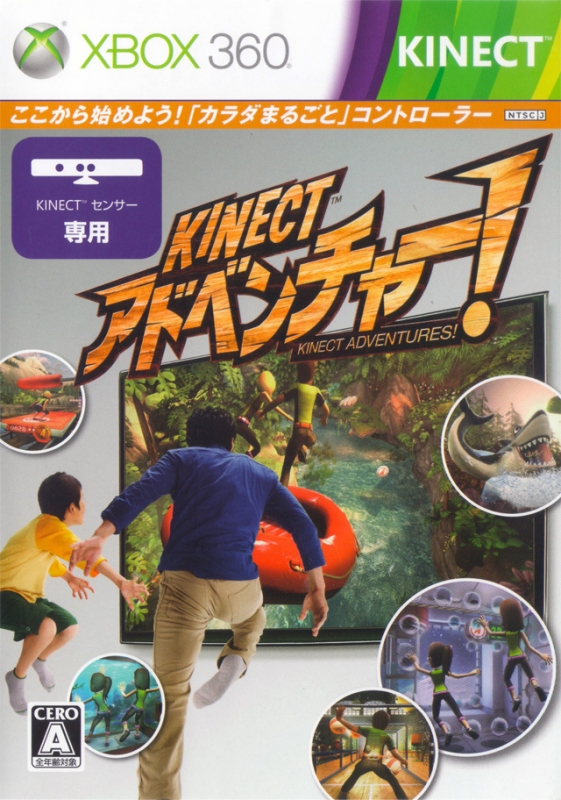 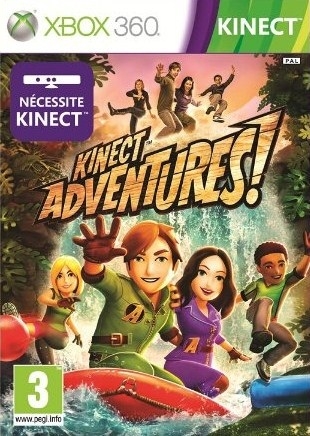 Kinect Adventures - the ‘free’ pack-in game for Kinect - features a set of five mini-games, each designed to show off how Kinect works and launch you right into the experience. At its core, that’s all Kinect Adventures really is, though it’s hidden behind a wealth of different modes, objectives and even a story (well, sort of...). The key question, though, is whether the games themselves are as entertaining and enjoyable as Microsoft would have us believe.

Once you’ve calibrated the game (which you need to do each time you boot it up, although fortunately you can opt to speed the process up), you’ll probably want to start off with Adventure mode. This is, for all intents and purposes, a very basic story mode. The premise is that you’re a new recruit in the Adventure Team, a group of adventurers who explore exotic locales and complete said five mini-games. The story is about as basic as it gets, but it’s light and very family friendly.

Here’s the lowdown on the games themselves:

[b]River Rush[/b]. This is white water rafting with a Kinect twist and is, for me, the strongest of the five games. Your avatar is placed in the middle of the raft and you steer it around obstacles and through gates and collectible pins by hopping from one side of the raft to the other. You can also launch your raft into the air by jumping, which you’ll need to do in order to dodge certain obstacles and in order to get to the hard-to-reach areas (such as the clouds in the sky above!), which are full of pins. Aside from the concept, which is pretty neat, River Rush is one of the stronger activities in the game because out of all of them it probably requires the strongest grasp of the Kinect controls, and also because its two player mode is a co-operative affair which genuinely requires good teamwork and coordination. 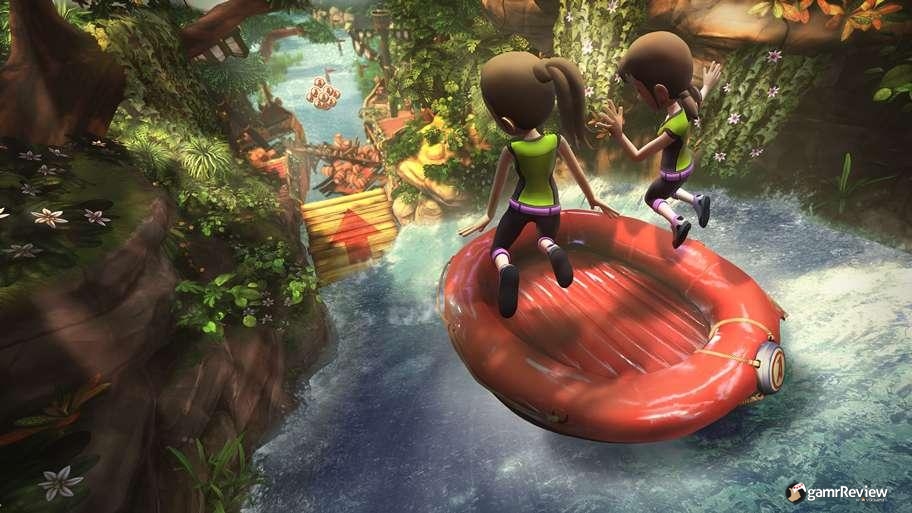 [b]Reflex Ridge[/b]. Either River Rush or Reflex Ridge will feature at the top of most‘best Kinect Adventure game’ lists. An on-rails obstacle course, Reflex Ridge has you jumping, ducking, side-stepping and flailing your arms in the air in order to avoid various obstacles, gain boosts of speed and collect yet more pins. It’s only a shame there isn’t a calorie counter included, because if you put some serious effort into it, you’ll be getting a good work out from Reflex Ridge. The two player here is also strong, although it contrasts nicely with River Rush in that it’s a frantic competitive race against the other player.

[b]20,000 Leaks[/b]. In reality, Reflex Ridge and River Rush are what make Kinect Adventures a decent game and they completely outclass the three remaining games. Out of those three, however, I enjoy 20,000 Leaks the most. Your avatar is submerged beneath the ocean in a glass tank. The catch is that the waters are infested with devious fish and sharks that keep banging against the walls, cracking your tank and springing leaks. You then have to move about the tank, pressing your hands, feet, head, elbows and knees against the holes that appear, which will in turn repair the broken glass. It’s quite a basic and in some respect mundane mini-game, which also highlights the current accuracy limitations of Kinect, but it’s a cheerful little game to which I didn’t mind returning every once in a while.

[b]Space Pop[/b]. Oddly enough, I went for Space Pop over Rallyball, because at least it actually works, even if it is dreadfully boring. The aim is to pop bubbles, and you can do this with any part of your body. Bubbles come out of holes along the side of the room which light up shortly before, so you know where you need to position yourself. The only unique quality to Space Pop is the idea that you flap your arms to float into the air, but that’s simply not a compelling enough gimmick to maintain even a minute’s worth of interest in the game. 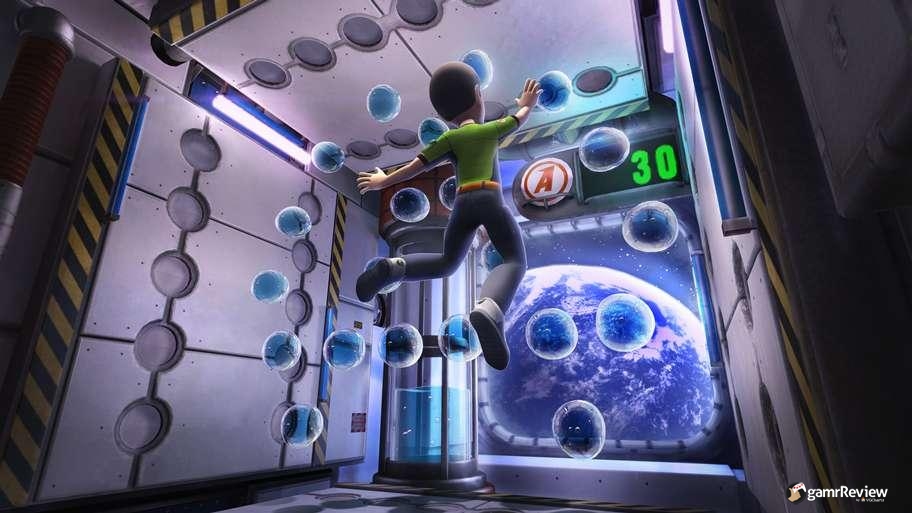 [b]Rallyball[/b]. This might come as a surprise, particularly given my harsh criticism of Space Pop above. How can Rallyball be worse than that, particularly after it was showcased so... enthusiastically, at E3? Of all the games in this package, Rallyball is the one that most illustrates the current limitations of Kinect, and is generally a very frustrating experience. The time lag, which isn’t all that noticeable in the other games, is highly evident in Rallyball, and it’s jarring to move to block the ball’s advance only to have it zoom past you because the game didn’t pick up on the gesture quickly enough. What could have been one of the best applications for Kinect (I was probably in that small minority of hardcore gamers who actually thought it looked pretty cool during the E3 presentation), actually turns into its Achilles’ heel.

The games themselves change very little over the course of the Adventure mode, although the objectives you need to accomplish within each level do vary. So, for example, in one ‘River Rush’ level, you will be challenged to collect as many pins as possible, whereas in another your goal may be to complete the track before the clock finishes ticking down.

Graphically, Kinect Adventures is actually pretty strong, although it obviously won’t blow anyone away. The graphics are colourful and bright in every sense of the word. The cartoon feel is well suited to the game’s aim of being a good family-friendly and casual introduction to Kinect, and the Xbox 360’s avatars are put to good use. Reflex Ridge, River Rush and 20,000 Leaks are all set against some beautiful backdrops and scenery, although once again Rallyball and Space Pop prove themselves to be weak links. The music is chirpy and well-suited to the adventure theme, although it can grate after a while. Though the voiceovers are perhaps a little too synthetically happy at times, this is both understandable and forgivable. 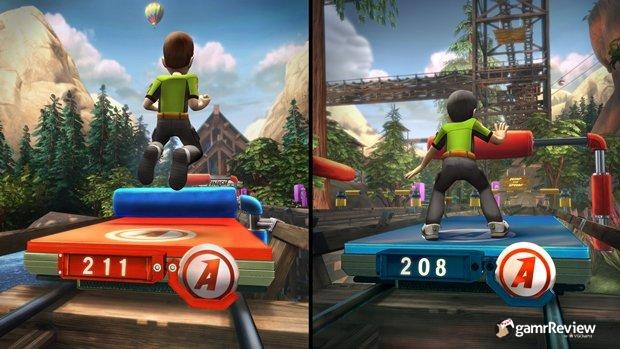 Value, however, is an issue for Kinect Adventures. There are plenty of modes: Adventure, Free Play, Timed and Multiplayer (the online portion of which is clunky to navigate and can take a while to set-up, but is stable and lag-free once you’re in a game), but at the end of the day you’re just replaying the same five identical mini-games over and over again, and as a result Kinect Adventures has a very finite lifespan outside of the occasional showcase for casual-gaming friends and relatives.

Kinect Adventures is a good showcase for both the potential and current limitations of the device. There are some niggling problems with the gameplay, including lag and limited accuracy, but they only adversely affect two of the five titles that comprise the collection. Two of the mini-games are quite basic and, to put it bluntly, simply boring or frustrating. On the other hand, there are two games here which do show off Kinect at its most simple, goofy, intuitive and enjoyable best. It won’t entertain you for long, but it’s a pretty decent introduction to Kinect.