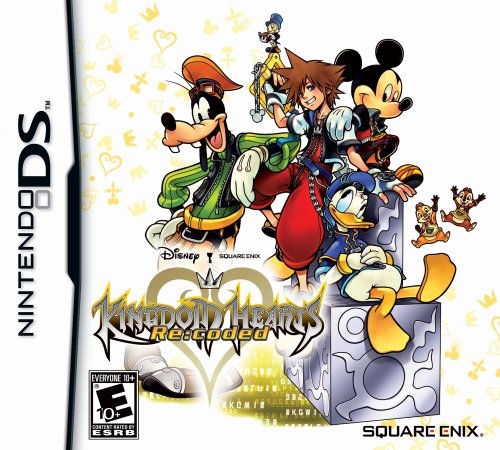 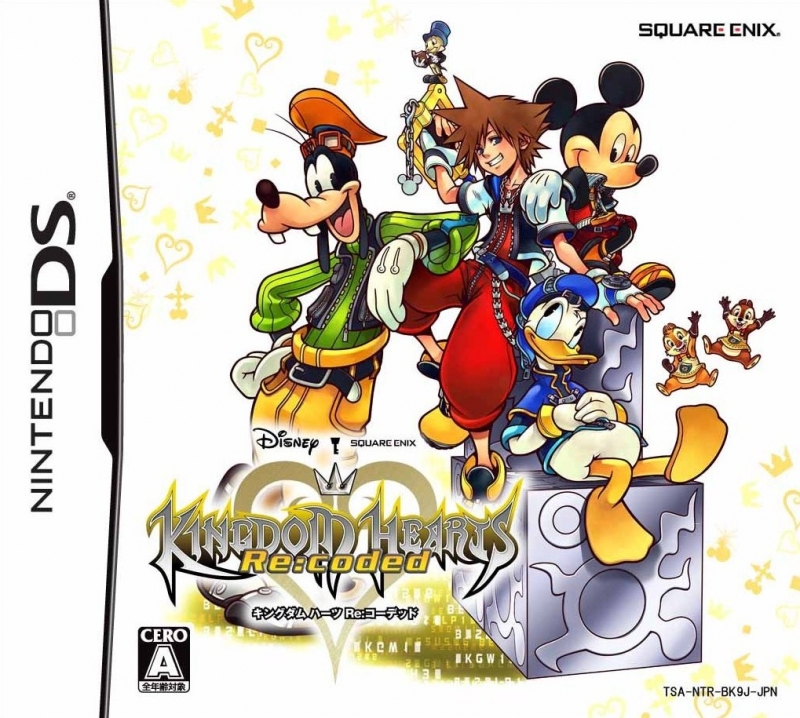 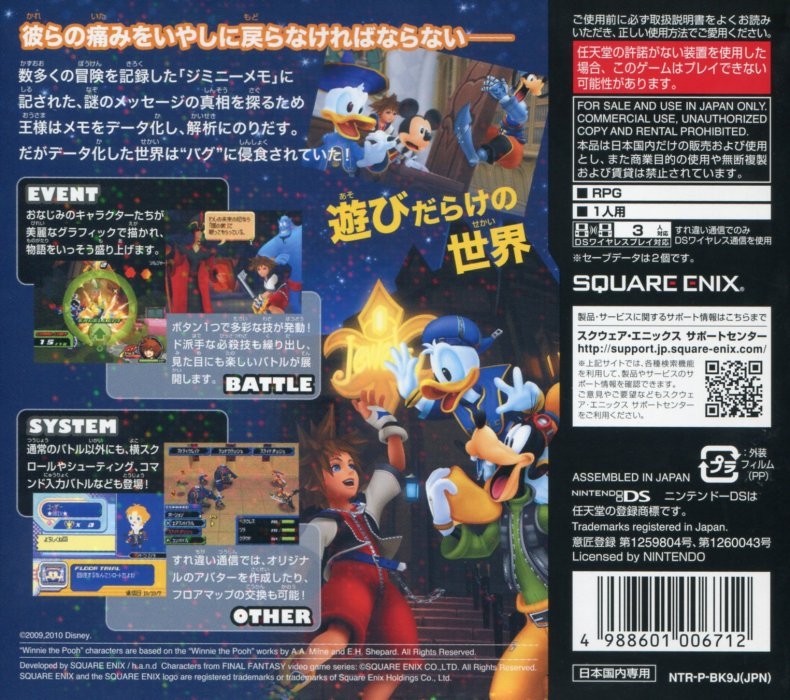 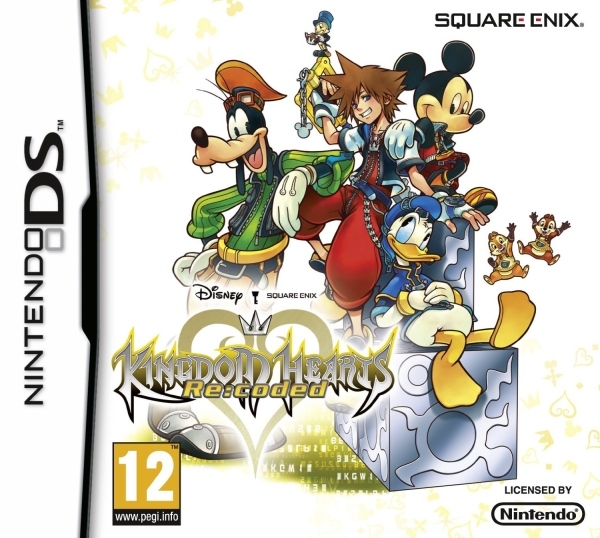 You nearly broke my kingdom heart.

...listen—we need to talk. Don’t give me that look; we both knew this was coming. We’re falling into a slump. Sometimes it’s been great--it was amazing the first time we took a stroll through the Destiny Islands, met famous Disney characters such as Aladdin, Hercules, and Alice, and took on nefarious villains, sealing the darkness away for good with the power of the heart and the Keyblade. I didn’t even mind when we did the exact same thing on our next date, Chain of Memories, under the guise that Sora ‘forgot’ everyone and each character was an extension of his memory.

But with your latest DS game, Kingdom Hearts Re:Coded, it feels like we’re just going through the motions. Oh, boy, here’s Sora again, and you’ve come up with another reason why he has no knowledge of his previous adventures and must journey through these lands and piece together lost memories. Yeah, I get it—Jiminy Cricket’s journal of the adventures has been erased and corrupted in the datascape, and so King Mickey enlists the help of a digital version of Sora to enter the pages and put everything back the way it was. And sure, there’s yet another mysterious guy in a black cloak watching your every move—whoop de doo, never had that before!

As if that wasn’t bad enough, it sometimes seemed like you stopped even trying to tell a cohesive story. I mean, how do you expect people trying this series for the first time to know who important characters like Kairi and DiZ are, when you mention them once and then move on? Great way to maintain your relationships, KH!

And can’t you at least try to look presentable when we go out? 90% of dialogue in the game is handled by poorly-drawn, non-voice acted, static character sprites. What, you couldn’t be bothered to come up with some nice animations for me? Your franchise used to pride itself on detailed animations, but nooooo, now that we’re comfortable with each other...

...no, you know what, I’ve had enough. I am so sick of you taking me for granted! Goodbye!

Look, it was unfair of me to focus on the negatives last night. I’ve thought a lot about it, and I realized that you really did try to spice things up. The last few hours of the game, when we actually diverged from repeating the plot of the first game all over again, were some of the best moments we’ve ever spent together. We tied up loose ends that have been lingering for years, wove together storylines that until then seemed entirely unrelated, and you showed signs that you’re planning something truly spectacular for our next outing. Was everything we’ve done so far leading up to this?

You also seem to realize that the key to a lasting relationship is variety. Yes, the gameplay still features the same beloved action-RPG combat and exploration as we’ve come to expect—we control Sora, running around with his Keyblade, bashing Heartless and other foes over the head and pelting them with magic spells. But this game is so much more than that! You may as well call it New Super Kingdom Hearts Fantasy and Punishment for all the gameplay styles you’ve served up! For every scene of 3D exploration, there’s a section where we’re tossed onto a 2D plane for some rudimentary platforming. Just as we’re beginning to get bored of the endless hacking and slashing, we jump into an on-rails shooter where tons of projectiles are always flying in our faces, or participating in turn-based battles alongside Hercules and Cloud Strife.

You’ve got to meet me halfway, though—not everything you’ve been trying has been beneficial to the relationship. The way Sora’s stats are handled just seems complex for complexity’s sake. Why couldn’t you just let him gain a level when he gains enough experience? Having him earn a ‘level up’ chip to be placed in a stat matrix, alongside other enhancements like chips that increase resistance to magic attacks, just seems like you put it there to be different from other RPGs rather than adding an interesting game mechanic. Yeah, filling up specific lines of tiles unlocks bonuses, like doubling their strength or giving you a new ability, but I think we’d both have benefited from a more streamlined approach to character management.

...and about what I said about the presentation, well, I stand by it, but perhaps I was too critical. While I am rather disappointed about the scarcity of cutscenes and the still images, the in-game character models do look quite sharp. It’s a big improvement over the last DS game, 358/2 Days, as this time characters don’t lose their distinctive features when you zoom the camera out. The engine’s smoother, too—the last game started to have trouble with slowdown when there were more than three to four enemies onscreen. While there are still frame rate drops here and there, there were plenty of exciting battles with upwards of fifteen foes in the area. What pre-rendered cutscenes there are look stunning as well, albeit with the noticeable artifacting necessary to cram it all into a DS cartridge.

Okay, the work you put into the sound department deserves some recognition, too. Most of the main cast has the same voice actors as in the console games, and you even remembered my favorite song, Simple and Clean! Sure, you seem to have goofed and given Sora sound clips from when Haley Joel Osment was young and after he went through puberty, but we’ll let that one slide for now.

I also really appreciate your desire to keep me coming back. The adventure took around 21 hours to complete—a little short by the series' standards. However, I didn’t even go back and complete any of the new challenges that are unlocked in each world once you complete its storyline. Oh, and don’t think I missed that little nod to the future of our relationship once I completed that specific task (you know the one I mean!).

Look, KH, you’ve made some mistakes—big ones. I can’t overlook the fact that the first two thirds of Kingdom Hearts Re:Coded yet again cover (in slightly altered fashion) the events from the original game. However, the final hours proved to me that you still have what it takes to make our relationship magical. At the end of the day, if anyone else were in this situation, I’d tell them that if they are just a passing fan of the franchise, the confusing, partially rehashed story is probably not worth their time. However, your true supporters—those who’ve played along on every one of your adventures thus far—should stick it out. I know I will for the foreseeable future, because it is clear that your heart is in the right place.