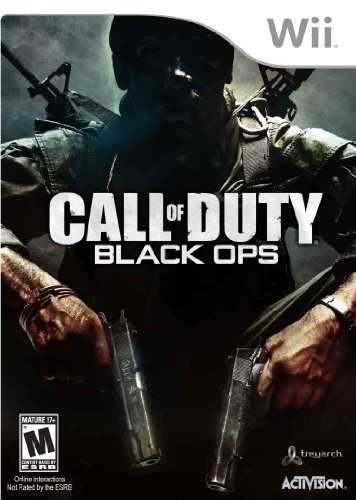 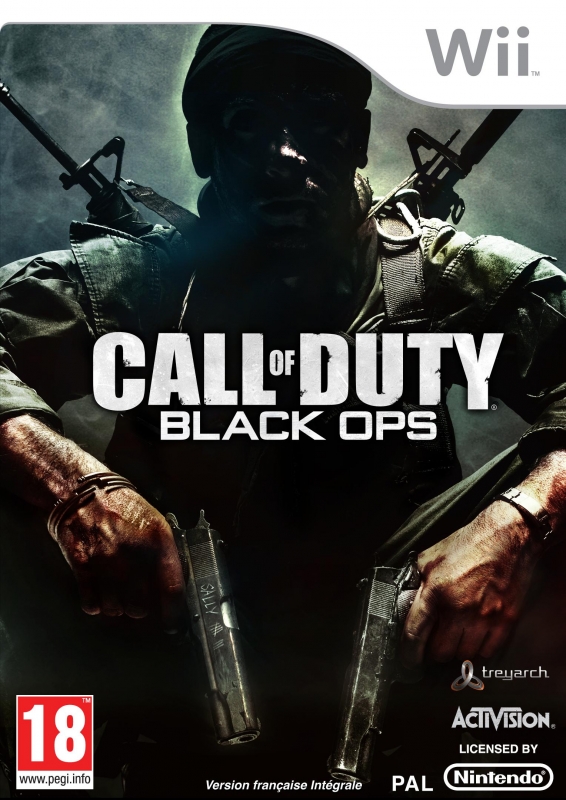 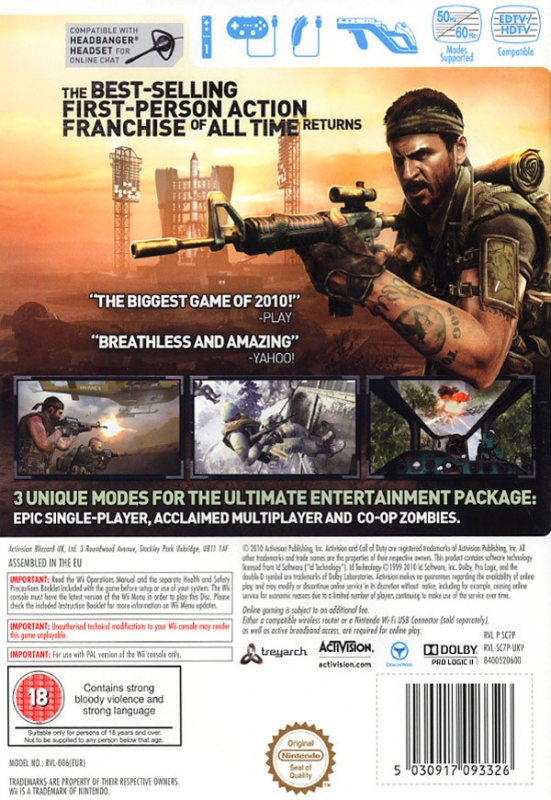 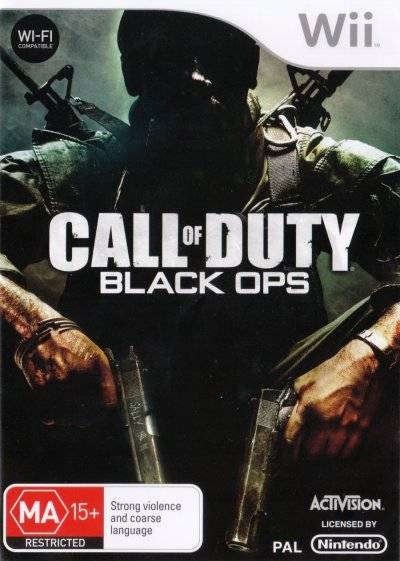 ‘Welcome to the jungle, we’ve got fun and games.’

Call Of Duty. These three simple words hold so much weight in the gaming world. Sales records are consistently broken when a new game bearing the name is released; businesses and schools report high absentee rates and gamers everywhere shout obscenities into tiny headsets. These things are what make Call Of Duty not just another first person shooter but a social phenomenon. Now, while the HD versions of recent Call Of Duty titles have come loaded with extra modes and options, the Wii versions have focused on bringing the ‘core’ experience of the single player and online modes of the series to Nintendo’s console. Well, Treyarch has finally decided to buck this trend and finally offer Wii gamers a complete Call Of Duty experience with Call Of Duty: Black Ops, and it’s good.Set in the mid 1960s, Call Of Duty: Black Ops takes place at the height of the Cold War, a time when the West was at odds with the communist East, deception and treachery are the name of the game and no one is to be trusted. The story revolves around U.S. Special Forces member Alex Mason and the mystery behind a series of numbers that hold the key to thwarting a terrorist attack on American soil. The game’s events are presented through a series of flashbacks that will take players to key moments of the Cold War, like the Bay of Pigs invasion of Cuba to the heart of Vietnam and the Tet offensive during the Vietnam War. This style of storytelling is a refreshing change for a series that, up until this point, relied on the same hooks to tell its tales, and while all the big set pieces and explosions are still in place (enough to make Michael Bay jealous) the story does its best to tone back the complicated and convoluted mess that was Call Of Duty: Modern Warfare 2’s campaign. Gameplay in Call Of Duty: Black Ops reflects the series’ white knuckle and fast paced attitude perfectly. One moment you will be shooting your way out of a Soviet gulag and next you will be perched on a Vietnamese hilltop fending off the Vietcong. The game just never lets up with the adrenaline fuelled action, which, while at first may seem like a good thing, does get repetitive at certain points during the campaign, especially during that classic (and not in a good way) Call Of Duty staple of throwing infinite enemies at you until you force yourself past the objective. The game does, however, do a good job of giving you other things to do than simply shooting enemies, at times putting you behind the handlebars of a motorcycle, in the gunners’ seat of a Soviet attack helicopter or even in the upper-atmosphere in a SR-71 Blackbird spy plane for some real time strategy action.Like Call Of Duty: World At War, and Modern Warfare: Reflex Edition before it, the controls for Black Ops are 100% customizable, giving the player a great degree of choice over how they want to play the game. Every button and gesture on the Wii Remote and Nunchuck can be re-assigned to suit your gaming style and the pointer and motion settings can be tweaked to make the game ‘feel’ the way you want it to. For those looking for a more traditional experience, Call Of Duty: Black Ops also supports the Wii Classic Controller, a first for the series on the Wii, although I still recommend using the Nunchuck and Wii Remote as the combination of motion and pointer controls offer a degree of precision that is simply impossible on an analog controller. This brings us the series’ vaunted online-multiplayer, which, for the first time is in full force here on the Wii. That’s right - all the modes, maps, perks, and challenges that HD gamers get to enjoy are also present on the Wii. A couple of the more ‘graphically intense’ killstreaks were removed (sorry, no gunships or valkyrie rockets here) and the Wii still has yet to get ‘Killcam’ implementation, but the online experience is essentially identical to the Playstation 3 and Xbox 360 versions, right down to the 12 year olds screaming in your ear thanks to the new Headbanger headset that launched alongside the game. I highly recommend picking up this headset, not just for what it adds to the online experience and team building, but for its surprisingly high build quality (for a licensed product) and the fact that it will be supported in future titles like High Voltage Software’s Conduit 2. It’s just a shame that the game doesn’t use the Wii Speak mic as an alternative to forcing gamers (like me) who already purchased Nintendo’s mic to invest in a second headset.Call Of Duty: Black Ops also introduces an in-game currency system called ‘COD points’, where your performance in online battles earns you both the traditional experience points and COD points. These points can then be used to unlock new weapons, perks, killstreaks and equipment. In addition to introducing ‘money’ to Call Of Duty, Black Ops also brings in gambling (who said gaming wasn’t a great role model?) in the form of Wager Matches where you can bet you COD points on the outcome of the battle and, hopefully, end up ‘in the money’. The game modes featured in Wager Matches are unique to the mode and include ‘One in the Chamber’, where you are given a pistol, one bullet and three lives, and then awarded an extra bullet for every kill. Miss and you must rely on your skills with a knife. ‘Sticks and Stones’ features a match of melee weapons only, like the tomahawk and ballistic knife. ‘Gun Game’ changes your weapon every 45 seconds for some really frantic action. Finally, ‘Sharpshooter’ provides every player with the same weapon and the goal becomes not just to get kills but the highest score. These modes offer up a new way to play Call Of Duty that is both fun and stressful at the same time, as defeat results in the loss of your precious COD points.

The game’s multiplayer also signals a series of firsts for Nintendo’s console. For instance, Call Of Duty: Black Ops is the first game that Nintendo has allowed the developers to patch after the release date. Good thing too, as for the first week after launch it was nearly impossible to actually connect consistently to the game’s servers. This is also one of the rare Wii games where you can immediately send an ‘ally request’ to a player you recently faced and have them added to your friend roster without having to exchange those pesky friend codes. Finally, Call Of Duty: Black Ops signals the Wii debut of Zombie mode, where you must survive wave after wave of the undead and complete your objective. It’s just a shame the highly publicized ‘Pentagon’ level, where you could play as Fidel Castro, Richard Nixon, Robert McNamara and John F. Kennedy was removed from the Wii version. With all of these features, modes and options, it’s easy to see that Treyarch has delivered the best online experience on the Wii to date. Call Of Duty: Black Ops quickly establishes itself as a very well presented Wii game. The graphics are still just as sharp as they were in Call Of Duty: Modern Warfare: Reflex Edition, but the textures seem to have been further enhanced, allowing more detail to be seen in the environments and on the weapons. Also the game features much more detailed lighting effects than its predecessors, making gunfights, lightning and explosions seem more dynamic and intense. It’s not all perfect however, as it's clear that Black Ops is a game that pushes the Wii to its limits and maybe even past them. Some portions of the campaign suffer from pretty terrible slowdown; the game has a tendency to crash during cutscenes (of all places) and an odd glitch sees the game’s audio fall out of synch with the action, as if the game were running faster than the Wii can handle.These issues aren’t the case with the multiplayer, and the game sees several huge improvements over both World At War and Modern Warfare: Reflex Edition. Not only have the graphics been ramped up close to the single player’s standards, the framerate also never dips during online play, even when the map is filled to the player limit and everything is either blowing up or being shot to pieces. Call Of Duty: Black Ops also has very little lag whatsoever, eliminating a common annoyance with Modern Warfare: Reflex Edition where you could be shooting directly at an enemy and the hits wouldn’t register.From an art-style point of view, Call Of Duty: Black Ops does a great job of bringing the player into the world of 1960s conspiracy theories and counter-intelligence operatives. Most of the scenarios will place you ‘behind the scenes’, showing the story behind what was reported in the media and the dark secrets that lie underneath. Keeping in step with its ‘darker’ nature, this game definitely earns its ‘M for Mature’ rating, as it features some of the most gruesome death and torture scenes in gaming history. There’s just something unsettling about filling a prisoner’s mouth with broken glass and then punching him in the face. In the audio department the game does a good job of placing you in the mid-60s, with a licensed soundtrack featuring some of the era’s biggest hits like The Rolling Stones' ‘Sympathy for the Devil’ and CCR’s ‘Fortunate Son’, as well as an original soundtrack that ranges from eerily quiet tunes to mosh-pit calibre metal. The voice acting is also top-notch, with big names like Sam Worthington, Ice-Cube and Gary Oldman lending their vocal talents to the game’s cast. Even the secondary characters and multiplayer announcers manage to be well voiced and deliver great lines that are still fun to hear over and over again.The single player campaign will last you roughly six to eight hours, depending on the difficulty level. That corresponds to roughly the length of other modern games in the genre, but it’s still slightly shorter than Modern Warfare: Reflex Edition’s campaign. However, like the Call Of Duty games that came before it, it’s in the multiplayer that Black Ops really shines, offering enough gameplay modes and options to keep you satisfied until the next Call Of Duty title lands (my guess would be mid-November 2011). It's just a shame that Treyarch didn't include any local multiplayer modes to the experience, even the reticule-only co-op from World At War would have made a nice addition, instead the developers threw in several Easter-eggs for the truly obsessed to discover. Now, I’m not going to give anything away, but if you're really clever (or find the cheat online) it's possible to play a classic text-based game from the 1970s in Black Ops.Well, it took four years and four titles, but the good folks over at Activison/Blizzard and Treyarch have finally delivered a full Call Of Duty title to Nintendo’s console. Everything, from the intriguing singleplayer to the amazingly in-depth multiplayer and even flesh-starved zombies, makes an appearance on the Wii. Call Of Duty: Black Ops is the complete package that is just as good as the both the Playstation 3 and Xbox 360 versions. This is the game that fans of Wii shooters have been hoping for ever since the console launched. Now, if you’ll excuse me, I have to go play a few deathmatches.