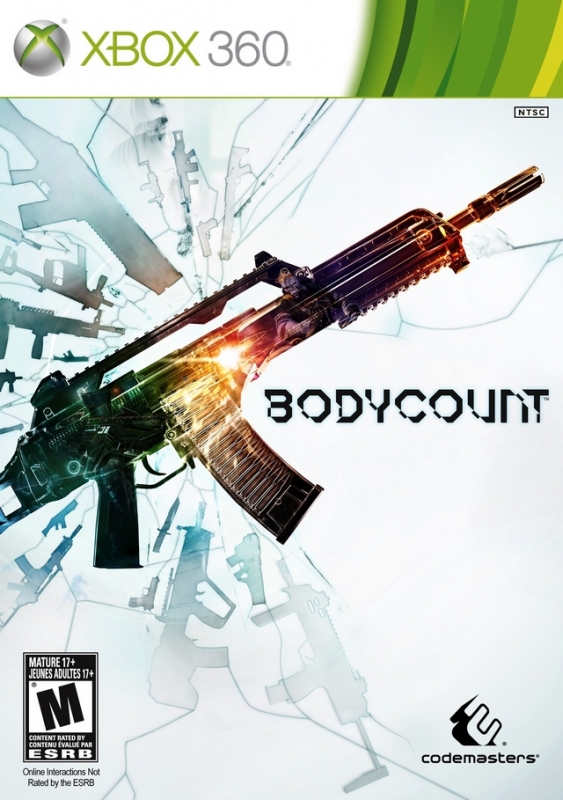 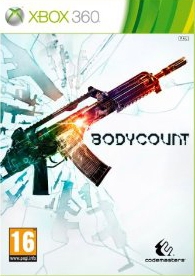 I know what you’re thinking.

It’s probably what I was thinking as well. Something along the lines of: “Does the world really need another FPS?”, followed by some mutterings under my breath about how Codies should stick to their forte of making superb racing games instead. But I digress. Bodycount. The key question is whether it has anything that makes it stand out, sufficient to make you actually want to buy it in a world already saturated with shooters? Does Bodycount have a compelling selling point?

Not really, is the answer to both questions. There are things Bodycount does well – there’s some good level design, a colourful art style, and a pleasant surprise or two along the way  - but for the most part everything’s been done better elsewhere, often in releases which offer the complete first person shooter package, something that Bodycount unfortunately lacks.

If you’ve ever played an FPS then you’ll slide right into the gameplay. However, it lacks the instant accessibility of certain other FPS titles when it comes to controls, feeling less streamlined and intuitive than you might expect (for example, there’s a sensation of ‘stickiness’ to any initial movement with the right analog stick which persists even after adjusting the sensitivity of the controls).

There’s also a tetchiness to Bodycount’s unique cover mechanic. It’s not the first FPS to introduce cover, of course, but Bodycount’s take on it is slightly different: whenever you pull the left trigger to bring up the iron sights you start leaning with the analog stick (instead of walking/running). Pop into cover and you can use this leaning mechanic to inch around the object in front of you to snipe your enemies. It offers more precision than you get in most FPS games and it works well. The downside is that the mechanic is triggered regardless of whether you’re actually in cover or not, which is somewhat of a deterrent to using precision aiming. The only way to use iron sights and not become a leaning statue is to only very gently push down on the trigger.

At least the unintelligent enemy AI means that becoming a human interpretation of the Leaning Tower of Pisa in the middle of the battlefield isn’t as deadly as you might otherwise expect. Enemies can be aggressive, and usually are, but often an enemy will run around like a headless chicken for a few seconds, or just stand still not even acknowledging your presence for a while, before attacking. 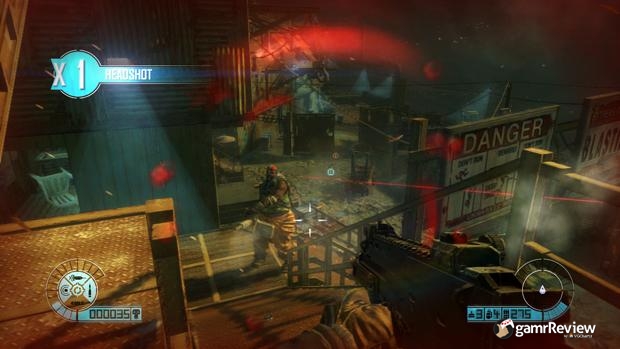 Usually I would’ve covered the story by now, but Bodycount’s feels so insignificant that it’s barely worth mentioning. Cut scenes feel tacked on, and you’re thrown virtually straight into the action with little exposition. This is not necessarily a bad thing given the quality of storytelling and dialogue in most FPS releases, and at least it means you can just get stuck in, but it also means the single player feels less like a campaign and more like a series of objective markers you have to shoot your way to.

You might expect this ‘shoot your way from point A to point B’ set-up to be indicative of dull corridor-shooting level design, but level design is actually one of the game’s strong points. Levels are quite expansive, and they’re most certainly not just a series of corridors; there are typically multiple paths to take towards your objective, wide open areas to explore and some inventive level design on show. There are even a set of very striking and futuristic Tron-esque levels which make for a pleasant surprise (though, unfortunately, once you’ve played one of them you may as well have played all of them). 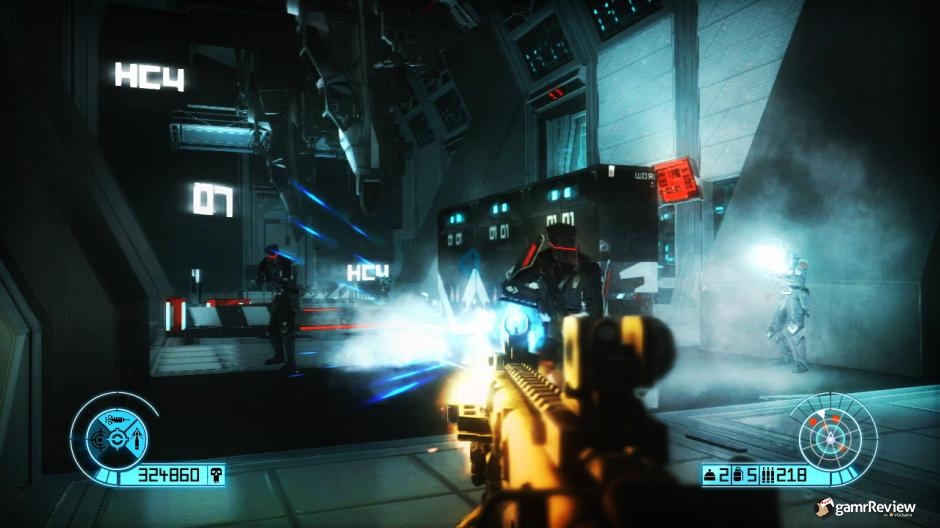 That brings me to the art style. The graphics are, on balance, fairly below average, but the art style helps to, if not to paper over the cracks, at least make the game look more vibrant. The aforementioned Tron-like levels make for a glorious contrast to the rest of the game, but even the levels set in more ordinary locales are colourful and interesting to look at. The loading times are also a breeze. Die, for example, and you won’t be waiting at a loading screen spamming annoying quotes by Donald Rumsfeld, you’ll simply be put back into the heart of the action within a couple of seconds. That said, the checkpoints are sometimes too sparsely spaced out, so you may end up being sent back to a section in the level that’s set several objectives before the one you were actually on, so dying certainly isn’t without its annoyances.

Bodycount borrows a fair bit from other shooters, though not as egregiously as, say, Singularity. Borderlands’ influence can be seen in the way enemies spew up ‘Intel’ upon death much like loot from a monster in an archetypal RPG; Bulletstorm’s in the use of a skillshot system; Battlefield’s in its (limited) deployment of items and structures to ‘shred’ to pieces with your bullets, and so on, but never in a way that’s even on a par with those titles, let alone an improvement upon them. The ‘Intel’ allows you to access one of 4 specials abilities via the D-pad (invincibility, explosive bullets, pulse wave or air strike), but I only ever found myself using the first two all that often, and even then only as a crutch to fall back on in an emergency; the Intel system never really feels like an integral part of the game, despite the sheer amount of it that’s spewed out by enemy corpses.

The skillshot/combo system feels similarly limited. Its full potential never realised, it just ‘happens’ in the background as you go about your business, the effects only apparent at the end of each level when you’re graded on your performance and then ranked on a leaderboard with your friends (assuming any own the game). The combo and rankings ultimately feel too random to be worth bothering with. 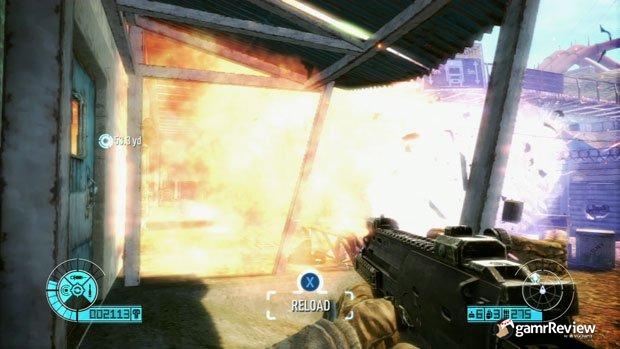 Value is a major issue. The campaign takes 4-5 hours to complete on normal difficulty, which is quite short even by today’s FPS standards. After that there’s not really a whole lot to do. As far as single player goes there’s ‘Bodycount mode’, but this is a glorified level select with friend leaderboards. There’s no campaign co-op, but there is a cooperative survival mode. The multiplayer options are clearly driven by the received wisdom that every single FPS game must have multiplayer, no matter how redundant it may be. The result is one of the most limited multiplayer modes I’ve come across this generation, with only a handful of maps and two modes to choose from. Because of Bodycount's small player base, it’s something of a chore to even find a game.

Bodycount is certainly not bad; there’s nothing fundamentally broken, and there’s fun to be had if you enjoy arcade shooters. Yet despite the vibrant art style, and one or two unexpected surprises in level design, Bodycount simply feels bland and sub-par. It’s competing on a playing field that’s packed with great titles each and every year. It’s a market where even good isn’t good enough, and where a game like this is, justifiably, going to get lost in the upcoming crowd of big releases.