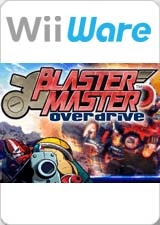 Where is my frog?

The NES library had masterpieces that defined and molded what we now know as videogames; during its golden age (1988 to be precise), Sunsoft launched a videogame that even today is considered one of the gems of the console. I’m talking about Blaster Master, a game that without being perfect and having one of the best stories of the genre managed to captivate the heart of a generation with its mix of game styles and action in every corner

Many sequels came out during the following years, but not a single one of those managed to capture the essence of the original and went largely ignored. Knowing this, Sunsoft paired with Gaijin Works and decided to revive the series in WiiWare by launching Blaster Master: Overdrive, a re-imagining of the classic with graphics and music of the SNES era.

The story (without frogs this time), makes a bit more sense than the original. Our character Alex, a world famous biologist, lives in a world that overnight is desolated by a plague that has turned animals into ferocious monsters that threaten humanity. Blaster Master: Overdrive tells us the story of Alex in his quest to save his family and at the same time stop the invasion, be it by fighting on foot or using S.O.P.H.I.A., his versatile futuristic vehicle.

Blaster Master: Overdrive has a diverse mix of gameplay that splits the action into two phases. For one of the scenes you pilot S.O.P.H.I.A., conceived as a side-scrolling action game with some puzzle and exploration, all in the style known as Metroidvania, where you have to improve your armaments and the possibilities of the vehicle to access new areas and advance in the game. On the other hand, you will play shooting phases, where you go out of your tank and enter caves controlling Alex from an aerial perspective. In these caves are energy tanks besides the items needed to power-up the three types of weapons that you will use to beat the gigantic monsters that protect the upgrades of our vehicle.

Sounds familiar? If you played the original game you’ll surely know that the premise is the same in this new version, the essence of what made this game legendary has been thoroughly respected, adding new elements more related to the new generations of games that have passed since the original, though the game still falls short in some aspects.
Some of the changes that you will notice after beginning the game compared to the original is that your vehicle now can shoot diagonally, something that could not be done in the NES version; the availability of a map for the areas you’ve already visited and the addition of save points scattered all around the world. These changes plus an improvement on the gameplay of the aerial view scenarios makes this the best Blaster Master experience that fans of the series can enjoy since the original game.

However, even with the improvements the game still has a few flaws that could turn off many players from enjoying the complete experience. One of those is the controls; Sunsoft did not leave the chance for any kind of button reconfiguration, so you are forced to control the game using the Wii Remote horizontally in NES style, without any support for Classic or GameCube controllers. The problem is that due to the improvements of the game new buttons are needed at the same time, and the mandatory configuration (1 for shooting, 2 for bombs, B for strafing, A for weapon changing, - for the map) of the game will turn against you in the most frantic moments, causing frustration and an assured pain in the hands. Another flaw in the design is the location of save points, that while their addition is welcome, they are very far from one another, and especially far from Boss fights, which will cause you to have to redo several minutes before getting to face them again; this becomes annoying after losing a couple times against the same boss.

Another thing bound to split opinions is the difficulty of the game, a legacy of the original classic. BM:O is a real challenge with enormous bosses that are hard to destroy as well as lots of enemies shooting at you from everywhere. Without a doubt, this is a game that few will get to finish and that will frustrate many people, especially during the second part of the game.

As for presentation, the game looks purposely like a 16-bit era game, with an updated look and an improved feel in many aspects. Regrettably, the game lacks variety in scenarios and in enemies, abusing from palette-swapping. Textures are meager and even some bosses are recycled. Another negative aspect is that the game only runs in 4:3, not allowing you to stretch the screen as games like the Rebirth saga from Konami do. The sound department without a doubt will be one of the most appreciated by fans of the series since it consists of remixes of the original game themes.

The game, depending on the skill of the player, can be finished in 7 hours according to the internal clock, but can take much more if you take into account all the time lost when your character dies. Completing it took me 12 hours since I decided to get all the power-ups for both Alex and Sophia, in addition to the many tries to beat that World 7 boss

Without a doubt Blaster Master: Overdrive is the best sequel the original game has seen to date, its new additions give some new life to the series and even without being a perfect game it’ll fill the void that fans of the series have had for years. If you are an old-school fan that is not afraid of a good challenge, download it, 1000 Wii Points stand in between you and some very fun moments.